Owning a puppy is a big responsibility and nobody wants to end up with a young dog that shows signs of aggression. True aggression in very young puppies is uncommon, but how do you differentiate between this and normal rough play? We’ll explore this question but also whether aggression is breed-related, the warning signs to look out for, and what you can do to help your puppy.

Any breed has the potential to be aggressive but larger breed dogs tend to cause more damage when they do bite, so are reported more often. There are some breeds that we associate with aggressive tendencies, like pit bulls, Rottweilers, and German shepherd dogs, and certainly, these types of dogs are often implicated in serious incidents. 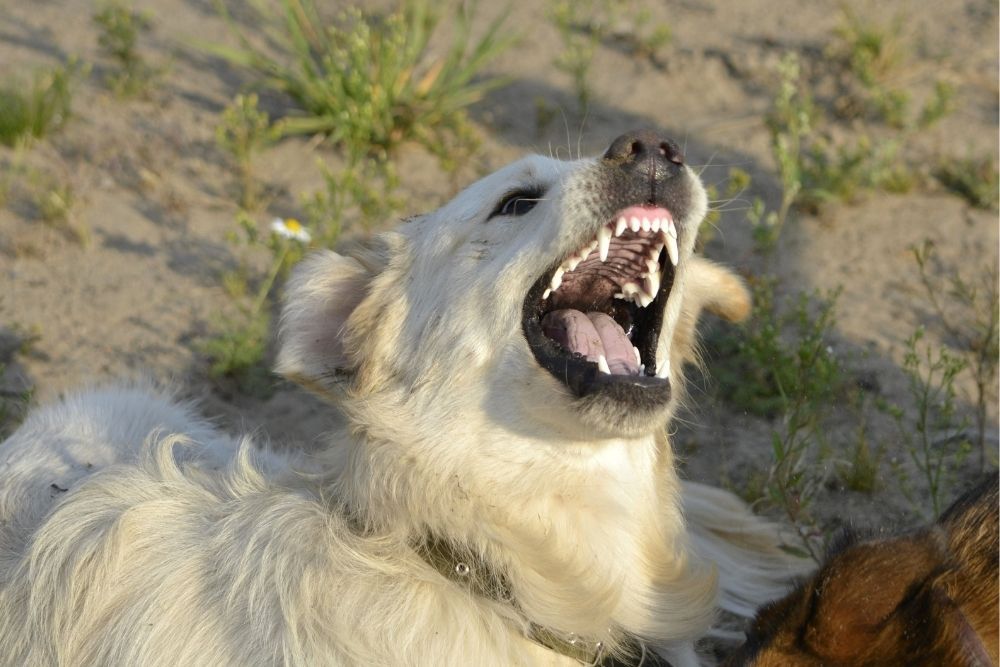 However, it might surprise you that one study showed Labrador retrievers were the second most commonly reported breed, after pit bulls. Labradors are known for being family-friendly pets and easy to train, but this shows that even things can go wrong here too. The figure is also probably high due to the Labrador’s popularity as a breed in the USA but does prove that aggression can be seen in any breed.

Small breeds can also be aggressive, but their bites do less damage so result in less frequent hospital visits (except for chihuahuas). But this still doesn’t mean aggression is acceptable behavior in smaller dogs.

There is no guarantee that any breed of dog will be 100% safe but there are some dogs where aggression towards people is less commonly seen. These include:

Generally, dogs that have been bred for guarding are more likely to show signs of aggression – including pit bulls, Rottweilers, Doberman Pinschers, American bulldogs, Shar-Peis, and Chow Chows.

When choosing your puppy, you should try to meet its parents to get an idea of the temperament traits it has inherited. Only even-tempered dogs should be bred, to increase the chances of producing a friendly puppy. 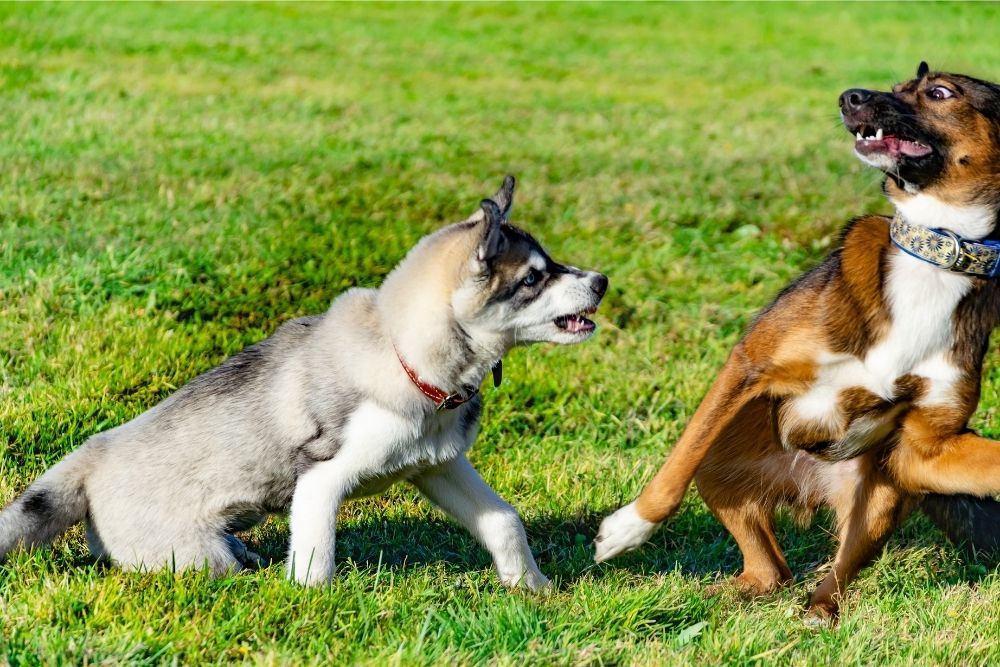 How to tell if your puppy is aggressive

Puppies by nature are often boisterous and enjoy rough play. But what’s the difference between an aggressive dog and a boisterous dog? There are some key differences between dogs that are playing and wanting to have fun and those that are becoming aggressive.

Dogs that are playing usually show body signals that indicate this is a game. One of these is the play bow, where the dog has its front end and elbows on the floor and its bottom up in the air. Usually, this is an invitation to other dogs and people to play with them. This also goes alongside the dog being bouncy and energetic and turning his bottom to whoever he’s trying to play with. This dog will also appear relaxed with an open mouth.

If your dog is play-biting this is usually done without force and accompanies other signs such as laying on his back or letting the other dog bite him back. Rough play like this is perfectly normal, and part of how young dogs learn to interact with each other.

You might be worried by aggressive puppy biting and growling. Some of this behavior is normal in young pups playing, but the growls are usually low intensity and not menacing, with no teeth-baring or snarling. However, if the other dog is getting hurt and no longer enjoying the game and your dog persists this could be a sign that he is acting aggressively. Most aggression between dogs occurs during a conflict over something, perhaps fighting over a toy, treat, or food.

The body language your puppy may demonstrate when being aggressive includes:

There is something known as the ladder of aggression in dogs which shows how some of the more obvious aggressive behaviors like biting are often (but not always) preceded by other, more subtle cues. These cues are particularly important to look out for when keeping children safe around dogs. Some initial signs of stress are quite subtle, such as licking of the nose and yawning, so be on the lookout.

What warning signs should I look out for?

Now we will look at some specific signs of aggression in puppies that should act as a warning to you. These show that your dog’s behavior is escalating beyond normal play. 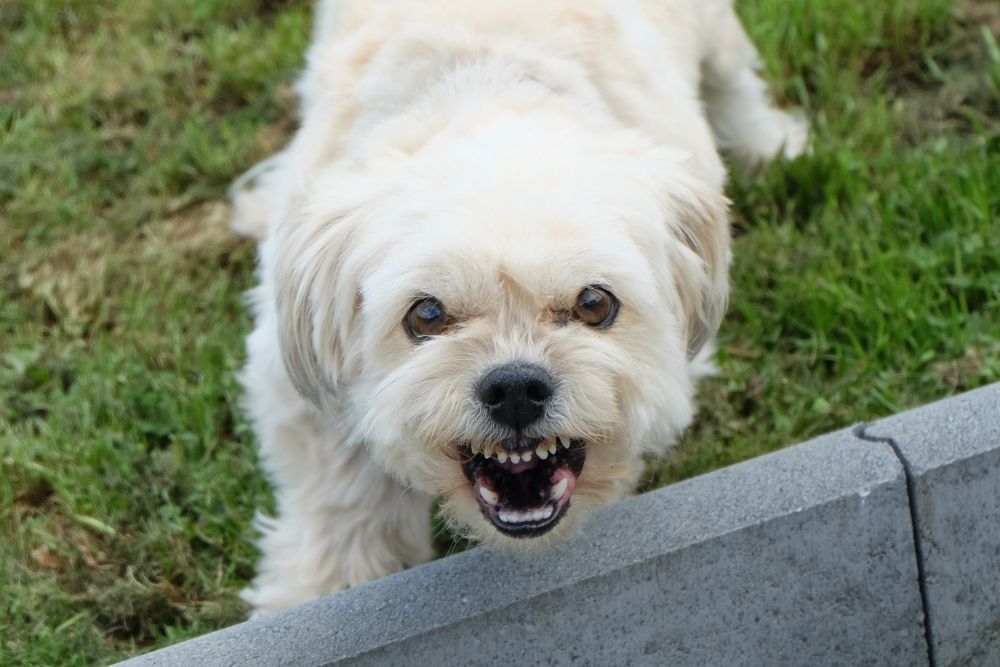 1. Possessive over food and toys

If your dog is very protective of his possessions this is a warning sign. Snarling or growling at you when you take his food bowl or toy away indicates aggression.

Is your puppy very grabby or snatchy? Snatching food from your hands is not ideal, as people often get accidentally bitten this way. Your puppy may also lunge or snap if you drop a piece of food or a treat.

Chasing and nipping at anything that moves is a problem. Some dogs will nip and bite at people’s ankles, especially young children, and this is something that can escalate. Family members start to become scared, and the puppy is no longer a pleasure to be around.

Barking at the postman, or a passing cat is accepted as fairly standard dog behavior. But does your dog bark excessively at strangers or when someone enters the house? This can be a warning sign of aggressive tendencies.

Does your puppy already see himself as top dog? This can be dangerous, as dogs should be part of the pack and look up to you as their leader. Your dog should know his place, by expecting his food last, not barging through a doorway ahead of you, and by following your lead.

If your dog is overprotective of you, and snarls at other people who approach then this is a dangerous sign. Treating everyone as an intruder is a sign of aggression and this needs to be worked on.

If your dog feels threatened, and his first response is to growl or lash out, this can be a warning sign. Dogs that don’t like being handled or examined and react defensively can be a problem.

The different types of aggression and what they mean

Different types of aggression are seen in dogs and these can trigger some of the behaviors discussed in the previous section. For some dogs it is just one area that sparks their aggression; for others, it could be multiple. 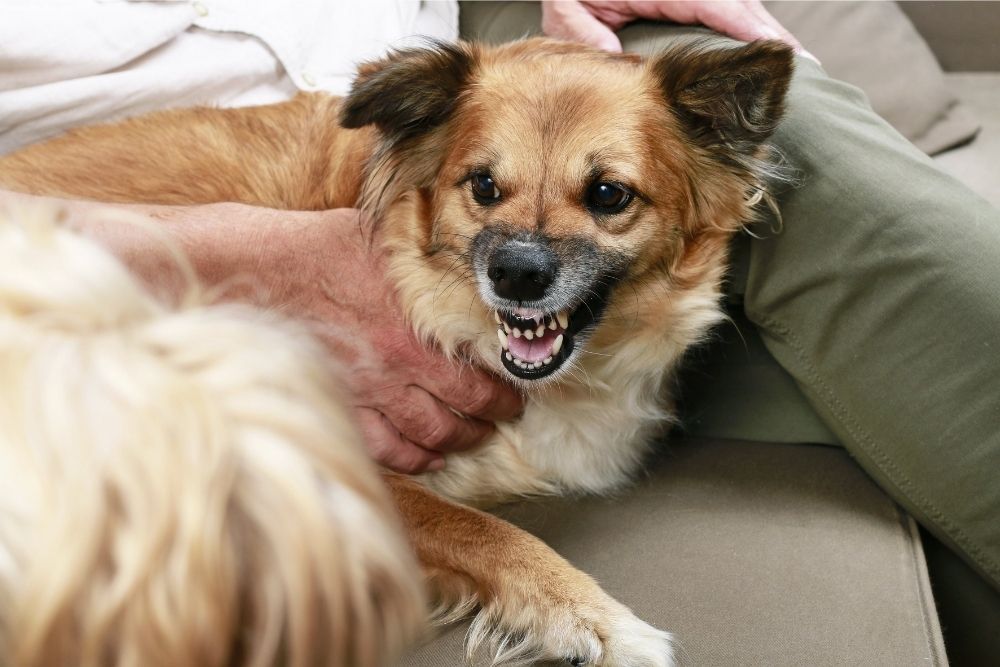 Some dogs will lash out because they are feeling fearful. This can be directed at people, other dogs, or even inanimate objects like the vacuum cleaner. As part of their fear, they may try and avoid the problem but will lash out if they feel backed into a corner.

This is also known as resource guarding and occurs when dogs are very possessive over toys and food bowls, or even over their pet parents.

Aggression is directed against protecting their territory. This could extend from not wanting intruders in their bed or crate, to guarding the home and surrounding property from intruders.

Aggression is focused on prey animals, which could be cats, birds, rabbits, and other small mammals. This can be dangerous if your dog catches up to them, and they could cause serious injury. Rarely this type of aggression can be directed towards humans.

Some dogs may react aggressively when they are in pain or feeling irritable. If your dog is acting aggressively out of the blue you may want to get them checked over by a veterinarian in case there is something painful causing them to snap.

One of the most common ways people are bitten by their own dog. Usually, this happens when your dog is already acting aggressively towards another dog, and you intervene by trying to pick your dog up or by physically breaking up the fight. The aggression then becomes directed at you, meaning you might get bitten.

How to train an aggressive puppy 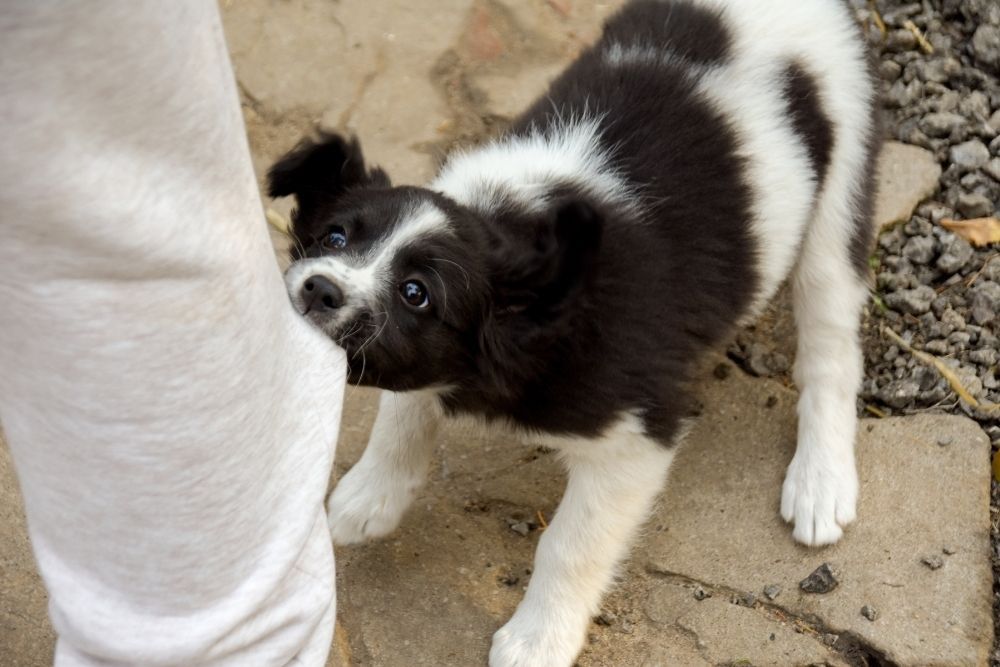 Whilst rough play with biting and mouthing can seem innocent when they are small, it’s probably not something you want them doing as an adult dog. So, it’s important to teach our puppies good manners from a young age. If your dog is getting too rough, follow these steps:

The first thing is to stop playing. Stop engaging with your puppy, fold your arms in so there is nothing to nip at, and stand still. You may even have to calmly remove yourself from the room.

If your puppy is getting a reaction out of you then it is likely he will want to continue. Children inadvertently encourage continued nipping and rough play by overreacting and screaming. Equally, you shouldn’t yell at your dog or pin him down or slap his nose if he is getting too boisterous as this can make things worse.

Try and replace your fingers with a toy or appropriate chew, so that he knows where to direct his play.

When your puppy is playing appropriately make sure you praise him! Lots of positive body language and verbal encouragement. If he gets boisterous again, then play stops straight away. Hopefully, your puppy will soon learn what is expected of him.

You should probably stop any rough playing with your dog altogether if they regularly lose control or if your puppy’s biting becomes painful and excessive. 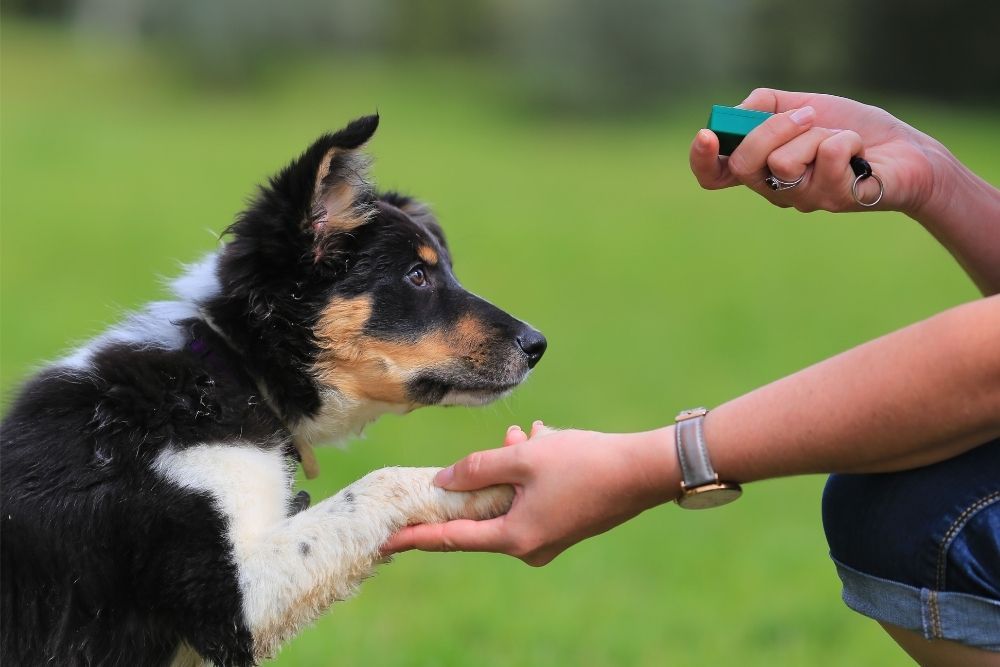 Taking your dog to obedience training classes from an early age can help to lay the foundation for good behavior. Classes can also give you the right tools to interact with your dog effectively. By learning commands like ‘drop it’ or ‘leave’ you can avoid areas of conflict easily.

Part of their training should also include handling. Get your puppy used to being groomed, and having their ears and feet touched. Reward and praise them for this, so that they see it as a positive experience.

If you have an aggressive puppy that bites other dogs and yourself, and you are struggling to bring things under control, then seek professional help.

Your veterinarian can check your puppy for any signs of health issues or pain that could be contributing to their aggression.

Qualified dog behaviorists can work closely with you and your dog to help iron out any problems and identify the underlying reason they are being aggressive. It is best to seek help early on as many puppies with behavioral issues can be easier to work with than older dogs where the behavior is more ingrained.

Rough play is part of being a puppy but it’s important to know when your dog is overstepping the mark. If your puppy is displaying some of the aggressive warning signs we discussed then it’s important to take action as you don’t want them growing up into a dangerous adult dog. If you are struggling with your puppy’s behavior then speak to your veterinarian or a qualified pet behaviorist for help. It’s far better to seek help early on rather than burying your head in the sand and letting the problem get worse!