In this guide we’ll take a look at the best dog food for Bloodhounds.
We’ve compared quality of ingredients, nutritional information, and value for money
to give you our top recommendations below.

Our Best Dog Food for Bloodhounds 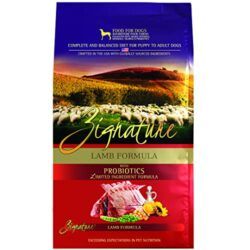 All of our dog food suggestions are carefully selected by professionals. We extensively research the products to check if they’ve been approved by governing bodies before making recommendations. You can read more about our stringent review standards here. And remember, always consult your veterinarian first, before changing your dog’s food.

5
Buy on Chewy Buy on Amazon

Zignature Lamb LID Grain-Free, a diet considered to be among the best dog foods for Bloodhounds, is a top tier food formulation that has been designed to support the needs of large breed dogs. A powerhouse food that is based on a finite list of ingredients, Zignature Lamb LID Grain-Free is based on a single lean, meat-based protein. Lamb is the foundation of this high performance food, a meat that is easy to digest and unlikely to trigger allergic reactions in the Bloodhound.

Zignature Lamb LID Grain-Free contains no corn, wheat, soy, dairy, or chicken, making it an excellent choice for Bloodhounds with allergies to some of the most common allergens for dogs. Its carbohydrate base includes fiber and antioxidant-rich fruits and vegetables such as peas and chickpeas to assist with good digestion and a healthy immune system. 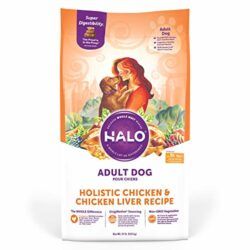 4.8
Buy on Chewy Buy on Amazon

Rated among the best dog foods for Bloodhounds on the market today, Halo Holistic Adult Dog Food is a premium tier diet that is rich in ingredients that support optimal digestion, health, and wellness in large breed dogs. The main ingredient in this diet is chicken, a lean protein that contains ample servings of the amino acids Bloodhounds need to maintain a healthy body.

Halo Holistic Adult Dog Food contains both whole grains, fruits, and vegetables to provide a well-rounded carbohydrate base to fuel the Bloodhound’s digestion and immune system. A proprietary blend of essential fatty acids known as DreamCoat has been supplemented in this recipe to promote coat and skin health.

This diet is free from artificial flavors, colors, and preservatives. 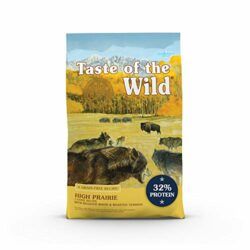 4.6
Buy on Chewy Buy on Amazon

Taste of the Wild High Prairie Grain-Free offers families with Bloodhounds exceptional quality nutrition at a price that fits neatly within a budget. This diet is considered to be one of the best dog foods for Bloodhounds available for purchase today. A recipe based on novel meat proteins, Taste of the Wild High Prairie Grain-Free lists buffalo as its main ingredient. The meats selected for this diet are easy to digest, full of amino acids, and not known to be common allergens for dogs.

This diet contains no grains, including instead high fiber and antioxidant-rich fruits and vegetables in its formulation. These ingredients boost digestion and encourage a healthy immune system. Ample essential fatty acids are present, ensuring a vital help for coat and skin health.

Taste of the Wild High Prairie Grain-Free contains no grains, corn, wheat, fillers, artificial flavors, colors, or preservatives. Probiotics have been included in this recipe to support optimal digestion in the Bloodhound. 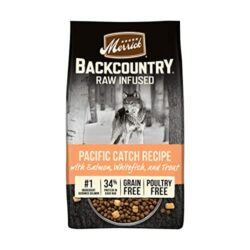 4.5
Buy on Chewy Buy on Amazon

Merrick Backcountry Raw, consistently recommended as one of the best dog foods for Bloodhounds, has been specifically formulated to address the nutritional requirements of large breed dogs. This diet prioritizes exceptional flavor. To this end, it includes both freeze-dried meat and dry food in its recipe to whet the appetite of the busy Bloodhound.

Salmon is the main ingredient in this diet. This lean meat is easy for dogs to digest and is full of the omega 3 and 6 fatty acids the Bloodhound needs for healthy skin and coat. A grain-free diet, Merrick Backcountry Raw’s carbohydrate content is based on antioxidant and fiber-dense fruits and vegetables.

This high value food is free from artificial colors, flavors, and preservatives. Both glucosamine and chondroitin have been included in this formulation to support joint functionality in the highly active Bloodhound. 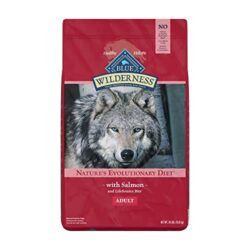 4.1
Buy on Chewy Buy on Amazon

Blue Buffalo Wilderness Grain-Free, an exceptional food formulation that is often rated among the best dog foods for Bloodhounds, is a protein-rich diet that places a high emphasis on balance and quality to promote optimal health and wellness in large breed dogs. Salmon is this food’s foundation, a meat that is of excellent quality and that is highly digestible.

A diet that contains no grains in its recipe, nutrient-rich carbohydrates in the form of fruits and vegetables have been included in this food to boost digestion and assist with the development of a strong and healthy immune system. A proprietary blend of vitamins and minerals called LifeSource Bits has been added to ensure a well-rounded approach to health and wellness in the Bloodhound. 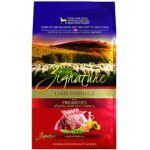 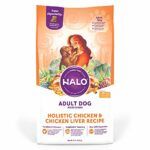 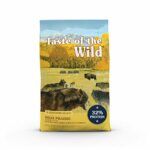 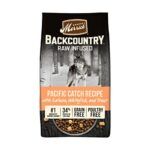 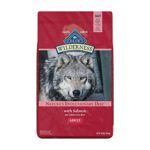 How to Choose the Best Dog Food for Bloodhounds

The Bloodhound is considered to be an ancient breed, possibly tracing its roots back as far as the first century. During the Medieval era, a concentrated effort was made to develop a dog breed with the ability to track scents for long distances. These early dogs are considered to be the first ancestors of the Bloodhound.

The Bloodhound first appears in written text in a poem penned in 1350 by a gentleman by the name of Sir Humphrey de Bohun, Earl of Hereford. The poem describes a dog that was an avid and skilled hunter tracking the scent of a romantic pair dressed as bears. This was the first time the breed was referred to by the name we use today: the Bloodhound.

The name Bloodhound refers not to blood but instead to the dog’s noble pedigree. In early days, the Bloodhound was a dog owned primarily by the wealthy and aristocratic. Instead of a hound that follows the scent of “blood;” Bloodhound refers to a breed that is “blooded,” meaning from a long heritage of highly prized dogs of its kind.

The Bloodhound’s sense of smell is so powerful that the breed is sometimes referred to as a mantrailer. Its olfactory senses are so acute that their findings are permitted as evidence in courts of law. The Bloodhound possesses the ability to trail even a faint scent for up to 130 miles in total.

A scenthound, the Bloodhound devotes all of its attention to tracking scents when permitted to do so or even out on a walk. However, though the Bloodhound excels at finding criminals, the breed only alerts at their presence, being affectionate, kind, and soft by nature.

A highly, highly active breed, the Bloodhound will not excel in a home that prefers the sedentary lifestyle. Regular, vigorous exercise on a daily basis is an absolute must for this breed. Because of the Bloodhound’s high activity requirements, this dog type is highly unlikely to struggle with maintaining a healthy body weight.

Bloodhounds are not the tidiest of dogs. They possess their own unique smell which can be unpleasant to many families. In addition to this, this breed slobbers profusely and can be very destructive. A true hound, the Bloodhound resists training, preferring to allow its nose to be its guide in life.

The Bloodhound is gentle and patient with children and gets along well with other dogs. However, because of its size and activity needs, this pooch is not suited to life in an apartment. Because the Bloodhound is driven to track scents, a secure form of containment is an absolute must for this breed to prevent escape attempts.

Unfortunately, the Bloodhound can be predisposed to a number of different health problems including eye issues, hip and elbow dysplasia, and fold dermatitis. Experts recommend feeding this gentle natured breed a diet that includes supplements to support eye, joint, and skin health.

The best dog foods for Bloodhounds contain a minimum of 18 percent protein and 5 percent fat.

Determining how much of a commercially prepared dog food to give to a dog can be challenging, particularly with highly active breeds like the Bloodhound. Experts recommend following the suggested servings sizes based on age and weight that are found on the side of the packaging of the best dog foods for Bloodhounds. These amounts can be adjusted according to the dog’s body condition, appetite, and activity level until the correct portion is found.

Because the Bloodhound can be predisposed to both hip and elbow dysplasia, it is very important that this breed not be allowed to become overweight. Free feeding this large breed dog is strongly discouraged. Daily meals and treats should be carefully measured and monitored.

As a large breed dog, the Bloodhound can be prone to developing bloat. Bloat is a life threatening condition that is believed to be brought on by eating too much or too rapidly. To lay a good foundation for preventing this health problem, the Bloodhound should be fed a dog food designed specifically for large breeds. These types of food typically contain big enough pieces of kibble to encourage careful chewing and swallowing of each bite.

The best dog foods for Bloodhounds take a lean, meat-based protein as their main ingredient. Whole meats or meat meals are the ideal choice. By-products and the plant-based proteins soy, corn, and wheat are of poor nutritional quality, and thus, are best avoided.

Carbohydrates assist the Bloodhound with good digestion and a healthy immune system. These carbohydrates can come from fruits, vegetables, whole grains, or a combination of the three. Bloodhounds that have previously expressed sensitivities to grains may do best on a grain-free diet.

Healthy fats provide the Bloodhound with strong reserves of energy and support for coat and skin health. The ideal sources for these fats are animal-based foods such as chicken fat or oily fish. However, some plant-based oils also deliver big on the essential fatty acids the Bloodhound needs to thrive.

Things to Look for in the Best Dog Foods for Bloodhounds

Here is a basic list of the most important things to look for in the best dog food for a Bloodhound:

The ideal diet for the Bloodhound should be based on a lean, meat-based protein with whole meats and meat meals the best options.

All items introduced into a food formulation should add nutritional value. Chemicals, flavorings, fillers, and mystery ingredients do not contribute anything positive to a Bloodhound’s diet. In fact, many of these ingredients can be the cause of allergy issues in the Bloodhound.

The Bloodhound benefits from a diet that includes prebiotics, probiotics, glucosamine, and chondroitin.

The AAFCO seal approval should accompany any food considered for the Bloodhound. This designation indicates a food has been assessed and found to be complete and properly balanced.

What is the Best Dog Food for Bloodhounds?