In this guide we’ll take a look at the best dog food for Bulldog puppies.
We’ve compared quality of ingredients, nutritional information, and value for money
to give you our top recommendations below.

Breed Advisor only recommends products that we’ve tested, or significantly researched . This page contains affiliate links, that at no additional cost to you, may earn a small commission for the site. Find out more here.

What is the Best Dog Food for Bulldog Puppies?

Use the dropdown to sort the table by the feature that’s most important to you. 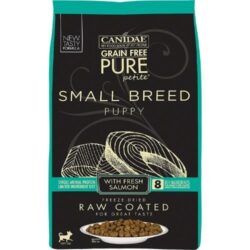 CANIDAE PURE Petite Puppy is powerhouse blend of nutrients to provide Bulldog puppies with all of the nutrition they need to thrive. This diet consists of both freeze-dried raw meat and dry kibble to increase eating satisfaction for Bulldog puppies to enjoy. This primary ingredient in this diet is whole salmon, a protein that is rich in omega 3 and 6 fatty acids as well as DHA to support brain and eye health as well as good skin and coat quality.

CANIDAE is enriched with probiotics to support the Bulldog puppy’s digestive processes, making it among the best dog foods for Bulldog puppies with sensitive stomachs. 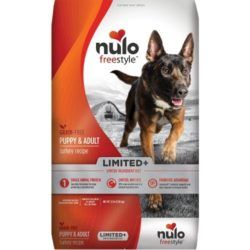 Nulo Freestyle Limited+ Grain-Free Puppy offers Bulldog puppies the premium nutrition they need to support them through their critical developmental periods. A diet based on a single animal protein, Nulo Freestyle’s formulation includes turkey, a meat added in its whole form and one that is unlikely to trigger allergic reactions in Bulldog puppies.

This food has been fortified with a proprietary probiotic blend to encourage digestion and promote excellent immunity. Nulo Freestyle places a lower emphasis on carbohydrates; each of which is derived from nutritious, fiber-rich fruits and vegetables. A diet based on an ingredients list of exceptional quality, it is not difficult to see why Nulo Freestyle is considered one of the best foods for Bulldog puppies. 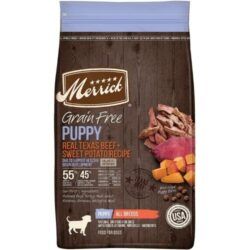 Merrick Grain-Free Puppy Food is an excellent quality diet that hits all the high points a Bulldog puppy needs from its daily diet. Deboned beef is the primary ingredient, a protein that is nutritious and delicious and jam-packed full of nutrients to support the Bulldog puppy’s growth.

Merrick, one of the best foods for Bulldog puppies, is both grain and gluten-free and is also free from artificial flavors, colors, and preservatives, making it an excellent choice for Bulldog puppies suffering from allergies. This diet is rich in DHA to support cognitive and vision development. 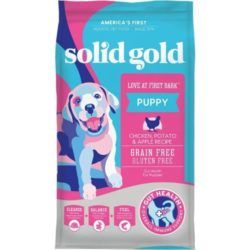 Solid Gold Love At First Bark Puppy offers Bulldog puppies the ideal diet to support them through their puppy years while providing their families with excellent value for their dog food dollar. A diet that is free from grains, Solid Gold is a good choice for puppies with food sensitivities.

The basis of this diet, rated one of the best dog foods for Bulldog puppies, is cage-free chicken, a protein full of the amino acids needed to ensure health and wellness in the growing Bulldog puppy. This food is fortified with omega 3 and 6 fatty acids including DHA to support good skin and a healthy coat as well as optimal cognitive and eye development. Probiotics have also been included in this diet to ensure excellent digestion. 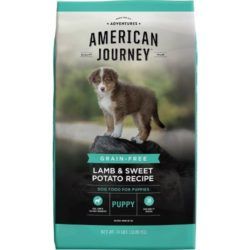 American Journey Grain-Free Puppy is a diet that families can feel good about feeding their Bulldog puppy. A food that is completely free from grains, American Journey also contains no corn, wheat or soy, making it an excellent choice for pets with allergies.

The carbohydrates in this food formulation are derived from nutrient-dense fruits and vegetables to boost the Bulldog puppy’s immune system and support digestion. Salmon oil and flaxseed have also been added to provide the necessary essential fatty acids to encourage optimal brain and eye health.

With so many nutritional benefits to offer, it is not difficult to see why  many owners consider American Journey to be among the best dog foods for Bulldog puppies.

How to Choose the Best Dog Food for Bulldog Puppies

Bulldog puppies are adorable bundles of joy-filled fun. With their characteristic lumber and charming toothy grin, the Bulldog is one pup that is easy to love. A breed that is loyal and loving, the Bulldog puppy reserves its greatest affection for children with whom the breed is known to be gentle and patient.

Bulldog puppies can suffer from a number of health issues. Among the problems which can be influenced by diet are allergies, patellar luxation, hip dysplasia, and skin fold dermatitis. To help prevent issues from affecting the hips and knees, it is critical that the Bulldog puppy’s food be properly measured and that its weight be regularly monitored to avoid the dog becoming obese.

Allergies and skin infections are other health problems that can plague Bulldog puppies. Any puppy that has expressed an allergy to any food should be fed a grain-free formulation as a precaution. The most common food allergens in most dogs include soy, wheat, and corn. The best dog foods for Bulldog puppies avoid these ingredients.

To ensure the Bulldog grows at the correct rate, it is vital that this breed be fed a puppy food which includes the proper ratio of calcium to phosphorous. The right proportion is 1.2 parts of calcium to each single unit of phosphorous.

Bulldog puppies require a puppy food that is ideally suited to the unique needs of medium build pups. Their diet should consist of 22 percent protein and 8 percent fat at a minimum. The best dog foods for Bulldog puppies are nutritionally balanced and enriched with the vitamins, minerals, and nutrients to support each phase of the pup’s development.

To determine how many calories a Bulldog puppy needs in a day, it is a good idea to use the puppy’s weight and activity level to gauge the recommended amounts listed on the side of the bag of food. This can serve as a starting point with amounts adjusted to reflect the Bulldog puppy’s activity level, weight, and appetite.

Bulldog puppies require a diet that is rich in protein to fuel their developing bodies. Since all dogs are carnivores, meat should be the main ingredient in any food for a Bulldog puppy. Whole meats are the best foundation for a diet, but meat meals are also of excellent quality. By-products should be avoided.

Plant-based proteins are very difficult for the Bulldog puppy to digest. In addition to this, corn, wheat, and soy are common allergens for most dogs. Diets containing these items are best left on the shelf as they are not considered among the best dog foods for Bulldog puppies.

Carbohydrates in the Bulldog puppy’s diet should come from high fiber, antioxidant-rich fruits and vegetables. Grains are best avoided for pups that have expressed food sensitivities but are fine for pups that seem to tolerate all foods well.

Healthy fats are a critical component of a Bulldog puppy’s diet, providing them with vital energy and the basis for healthy skin and coat. These are best derived from animal sources such as chicken fat or oily fish such as mackerel, anchovies, salmon, and herring.

Here is a basic list of the most important things to look for in the best dog food for a Bulldog puppy:

The first ingredient in any food suited for the Bulldog puppy should be meat from an excellent quality source. Whole meats are the preferred foundation, but meat meals are also an excellent choice.

Chemicals, fillers, artificial flavorings and colorings, and mystery ingredients provide no nutritional benefit to a growing Bulldog puppy. Diets containing these elements can trigger allergic reactions, and thus, are not recommended.

No diet is complete on its own, and thus, can benefit from the addition of helpful supplements. Among the most important ingredients to look for are prebiotics, probiotics, glucosamine, and chondroitin.

All foods appropriate for the Bulldog puppy should bear the AAFCO seal of approval, indicating it meets the standards for a complete and balanced food.