Playing tug of war with your dog is so rewarding, for both dog and owner. There are so many benefits of tug of war for your dog, making it mentally and physically stimulating. With lots of great tug of war dog toys on the market, you can find something that suits you and your furbaby. 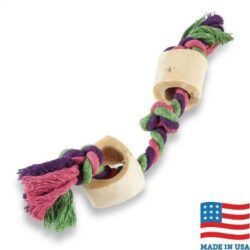 The Bones & Chews Tug Rope Dog Toy is one of the best dog tug toys available, combining both a chew toy and a tug of war toy in one. The rope comes in a variety of fun colors with knots on each end which I found made it easy to grip for both dog and owner. The bones are slow-roasted, minimizing splintering and ensuring they are extra tasty for your pampered pooch.

Both the toy’s bone and rope aspects provide an excellent opportunity to support your dog’s gum and tooth health. This toy is suitable for a range of adult breed sizes, and I feel it is a great mid-range cost option. 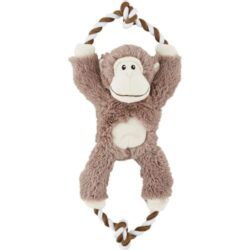 The Frisco Plush Squeaking Monkey Dog Tug Toy is a great option for pups who enjoy a good old squeaker in their toys, as well as playing tug of war. If your dog likes a soft toy, the cuddly monkey is a fun addition. This toy is great for small and medium breeds, with ropes that run throughout the monkey and loop at each end for added tug of war fun.

This toy helps keep your dog active and their mind stimulated, as well as providing a chewing opportunity to keep their teeth healthy. My dogs loved this toy and I’d recommend this as a great budget option. 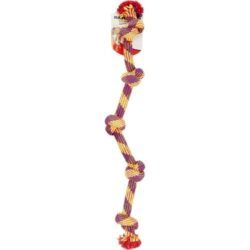 The Mammoth Knot Dog Tug Toy is one of the best dog tug toys for all sizes and breeds. There are various size options to choose from so you can find the right size for your dog. With rope fibres that clean and floss your dog’s teeth as they play, this toy is fantastic for healthy teeth and gums. It’s even suitable for teething puppies!

With plenty of knots along the rope, the toy is easy to grip, allowing for that perfect tug of war game. I found my spaniel loved chewing at the knots which kept her entertained, as well as playing tug with us. Pricing varies depending on your dog’s size, but I feel this is a reasonably priced toy. 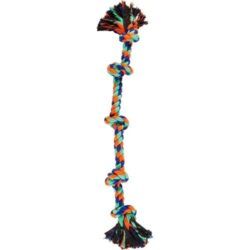 The Frisco 5 Knots Dog Tug Rope Toy is one of the best tug of war dog toys for larger breeds. Its large size and multiple knots make it tougher and easy to grip for bigger dogs (and their owners, of course). The toy is excellent for both indoor and outdoor play, as well as superb for chewing to keep those precious teeth clean.

This is a fantastic mid-range price option for large breed dogs. 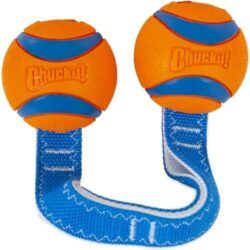 The Chuckit! Tough Tug Dog Toy is a fantastic option for dogs who love energetic, rambunctious play. It’s great for games of tug, catch, and fetch with a durable, bouncy ball on each end of a sturdy nylon handle. Rubber edges ensure that the toy is soft on your dog’s mouth during playtime.

The bright orange and blue colors mean it’s easy to find, even outdoors and at night. There are two size options for this toy, suitable for small and medium dogs. I found that this toy is fantastic for allowing 2 dogs to play tug together, giving them a ball each to hold onto (and preventing jealousy).

This toy is slightly more pricey than other options, but in my opinion, is well worth the money. As an added bonus, this toy is compatible with the Chuckit! Launcher range. 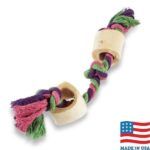 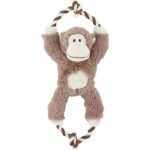 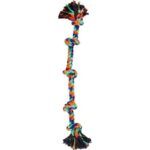 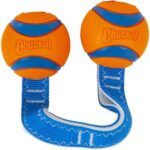 There are a few things you should look for when choosing the right dog tug toy:

Choosing a toy with high-quality materials reduces the chances of the toy fraying or breaking during playtime, allowing you to focus on having fun with your dog. Good quality materials will also provide comfort for both you and your dog.

Easy to Grip Shape For Your Dog

Your chosen toy should have something your dog can bite down onto easily. This might be a knot on a rope or a rubber handle, for example.

Something For You to Grip

You need to be comfortable during play too, so aim to find a toy that has something for you to grip easily. A good tug of war toy will have easy-grip options on both ends of the toy.

Dogs come in all shapes and sizes, and so do their toys! It’s crucial you find a toy that is right for your dog’s size to make sure they are comfortable and safe while playing.

Dogs can get a new toy dirty within moments, so it’s a good idea to pick a toy that’s easy to clean for your own benefit. A toy that can be popped in the washing machine or wiped down is useful.

Even the toughest dog toys are not indestructible, which means it’s important to supervise your pet when they’re playing. If any parts break off the toy, it can be a choking hazard or even cause an internal blockage, so if a toy breaks, you should take it away from your dog.

Ensure you have plenty of room before playing tug. Depending on your dog’s size and strength, you should adjust how hard you pull during the game, so you don’t damage their teeth. You should also ensure the material of the toy isn’t too hard or sharp. Monitor your dog’s behaviors throughout the game to ensure they’re behaving appropriately.

What Are The Benefits of Playing Tug of War With Your Dog?

There are so many benefits of playing tug of war with your dog. These include:

You might be wondering why your dog loves playing tug of war with you so much. Well to a dog, their owner is their world, so your dog will love spending any quality time with you. Most dogs also love playtime as an outlet for their energy.

Research suggests that when two dogs play tug, they are building trust between them, so perhaps our dogs play tug with us to build trust. The tugging motion mimics the behaviors your dog’s ancestors would have used during hunting. Other evidence suggests that dogs have evolved to play tug with their owners to replace the biting behaviors they would use when playing with other dogs.

How should your dog play with a tug toy?

Your dog should have a firm grip on a good quality tug toy, ideally on the other end or middle of the toy, so their teeth are far away from your hands. They should exhibit playful behaviors throughout. Your dog should drop the toy anytime you ask them to during the game.

Keep a close eye on your dog’s behavior throughout the game. If your dog becomes over-stimulated, too intense, or their teeth make contact with your hand, take a break from the game and play again later. It’s important to note here that there is plenty of evidence to show that playing tug of war with your dog doesn’t lead to aggressive tendencies and is perfectly safe as long as you set boundaries.

Playing tug of war with your dog can be a great bonding experience, providing hours of entertainment for you both! There are so many benefits, so if you haven’t tried it yet, I would recommend giving it a go. Choosing the best dog tug toy for your dog and setting clear boundaries keeps the game safe and fun for all.

What is the Best Tug of War Dog Toy?