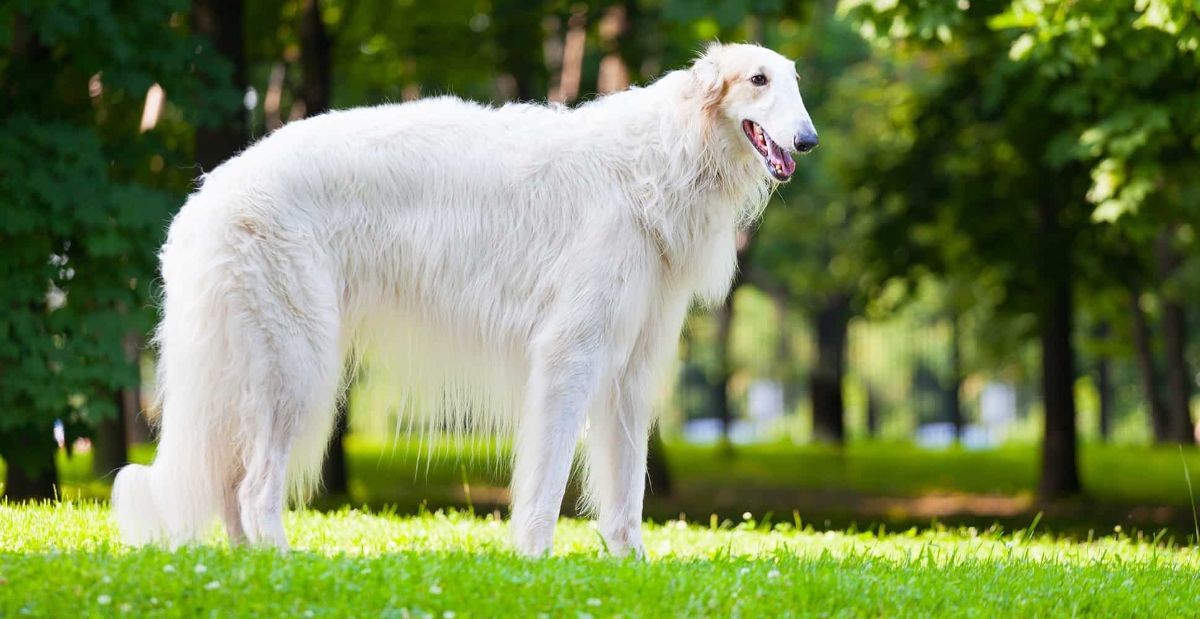 The Borzoi is not a common breed in the USA, and so for the uninitiated, they can be best described as a large sighthound adorned in a long, silky coat. Their grace is evident in every move, and this may conceal their strong hunting instincts. Although full of energy as pups, they become calm and gracious companions as adults who make perfect family members for a quiet household. 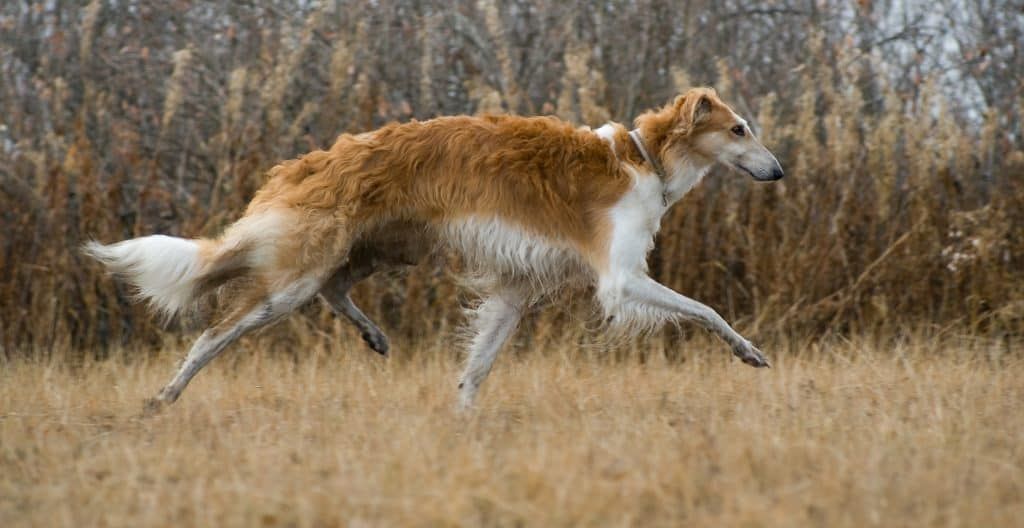 Borzoi love the opportunity to run free and stretch their legs. Potential owners do then need to carefully consider whether they can provide a fenced area, essential for safe free running every day of the week.

Borzoi should not be fearful or aggressive, but they may be reserved when meeting new people for the first time. This may not make them suitable for homes where they are large numbers of new people or lots of children in and out of the house. 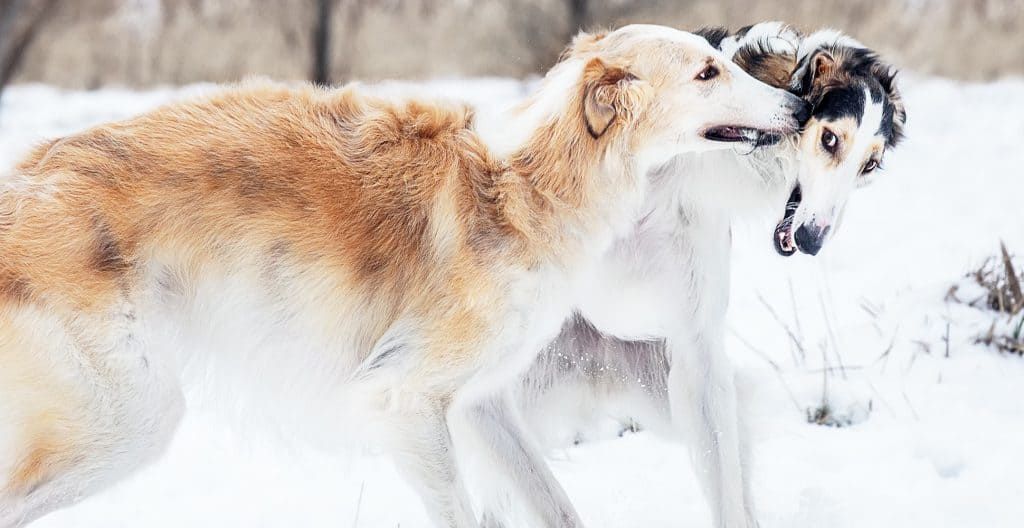 First known as the Russian Wolfhound, the Borzoi was initially bred in Asia. Right back to the time of Genghis Khan, mention is made of the long hound being used for hunting animals such as hares and wolves through sight rather than scent.

In Russia, the earliest Borzoi were thought to have been bred through crossing many breeds, including the long-coated, smooth-faced bear hound and a tall Russian sheepdog. In 1650 the very first standard for the Borzoi was written, a standard which has changed very little to the one in place today.

By the late 1800s, hunting game with the Borzoi became the national sport of the Russian aristocracy, and so the Borzoi was developed to meet the needs of the hunt. This breeding focused on enhancing courage, speed, agility, and strength.

The Borzoi was a popular breed with the Tsars before the Russian Revolution, and they were held in such high esteem that they could not be purchased, only given as a gift by the Tsar. Finally, in 1890, the very first Borzoi arrived in the United States having traveled directly from Russia. Such a large breed of dog is going to need an equally large home to live in! While there is no need for a Tsar’s palatial abode, the Borzoi may not be a good match to a smaller family home or apartment. Careful consideration is needed before taking on a dog of this size. 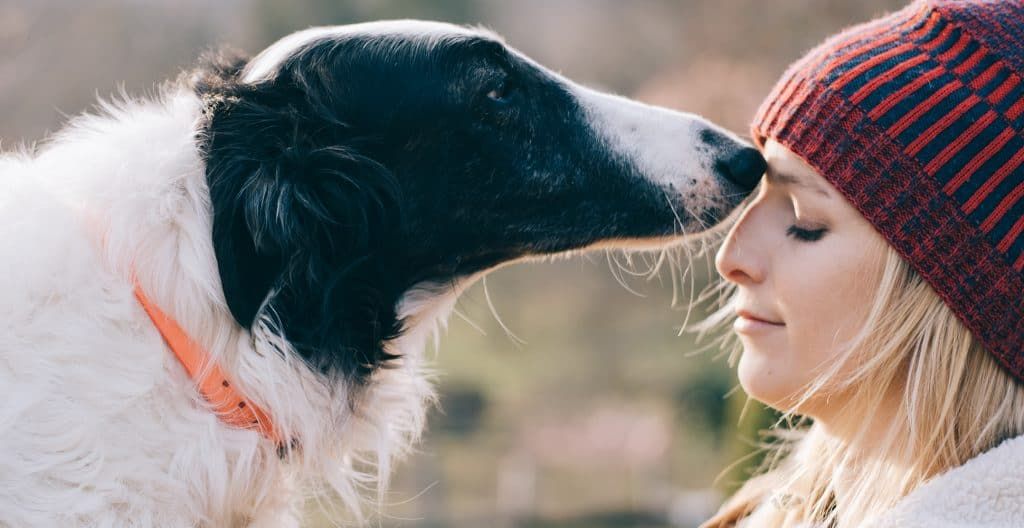 The Borzoi is a gentle soul and generally is an undemanding and sensible bred to live with. A well-mannered breed who rarely barks, but that doesn’t mean that they won’t have their clownish moments, especially when younger!

Borzois are independent as adults but are also very affectionate with their owners. They shouldn’t be shy, but equally, they may not feel the need to approach strangers. Once introduced to new people, they are friendly, affectionate, and enjoy the attention. This is a breed that can be sensitive, and as such, it’s unlikely that they’ll enjoy a roughhousing type of play. With this in mind, careful consideration is needed for their suitability with young children unless careful supervision is in place. As with many breeds, the Borzoi is unlikely to enjoy being left alone for long periods.

Coming initially from Russia, it should come as no surprise that Borzoi enjoy cold weather, and you can often find them laying on hard, cold surfaces. This breed may then find it uncomfortable living in a home that is continually heated to a high temperature. 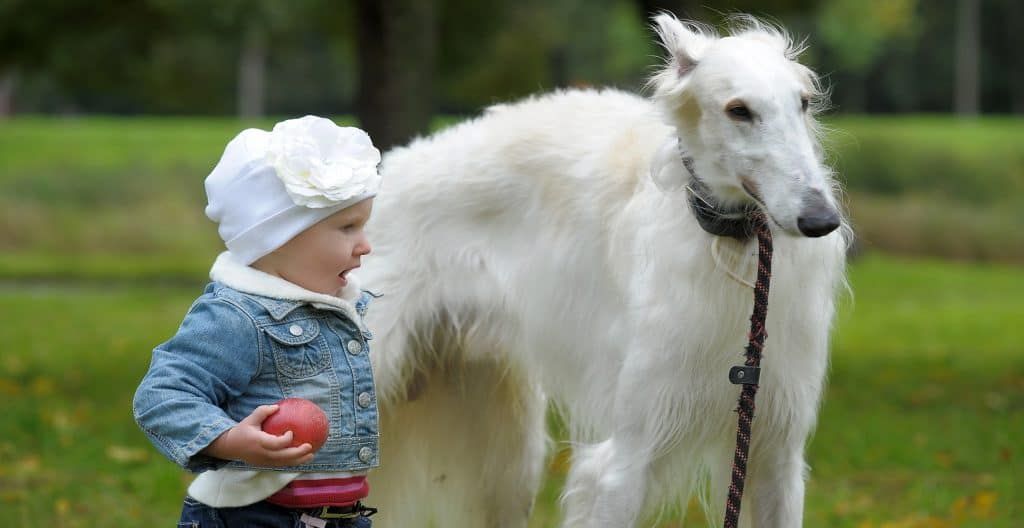 The Borzoi has relatively few health problems. There are some conditions which breeders should test or screen parents of pups for, prior to breeding. These include:

Borzoi can be very sensitive to some types of anesthesia. So, if your Borzoi does need surgery, your vet needs to be aware of this. It’s also been found that because of their lack of body fat, they may also respond to drugs differently compared to other breeds.

No trimming is needed when grooming a Borzoi, but regular brushing is necessary to maintain their beautiful silky coat. Around once a year, the Borzoi will shed more heavily for several weeks; more grooming will be needed during this time to prevent your home from becoming very hairy! 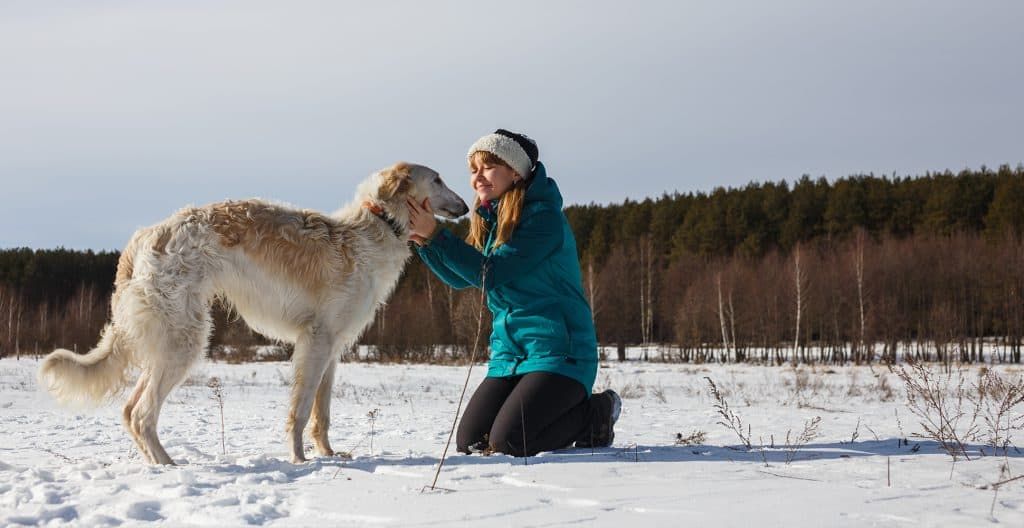 Borzoi are intelligent but are also independent and free-thinking hounds, so training can be a challenge. That said, with patience and consistency, great results can be achieved. Reward-based training methods are likely to get much better results with this sensitive breed rather than the use of punishment and force.

The hunting instinct to chase is still very strong within the Borzoi. This means that they may suddenly switch to hunting mode when out on a walk. For this reason, great care is needed when a Borzoi is off-leash, and it’s recommended that this only happens when within a well-fenced area. 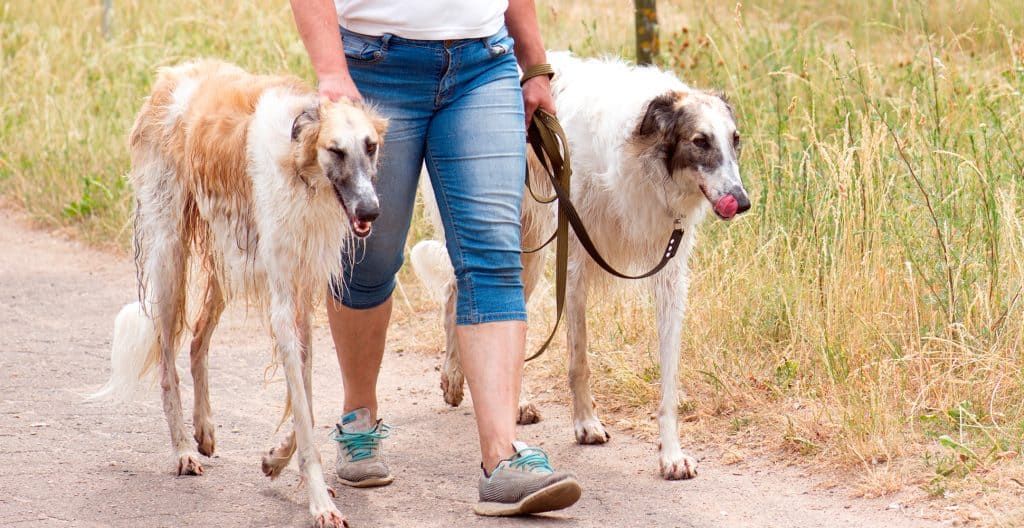 Even though this is a large breed, they are athletic animals who need daily exercise. They love to run, but this tends to be in short spurts rather than a need for long periods of free running. An hour per day of walking on lead and opportunity to stretch their legs will be enough to keep most Borzoi fit and healthy.

The Borzoi tends not to be overly playful once they become adults; however, they enjoy the companionship of their family and quality time with them. 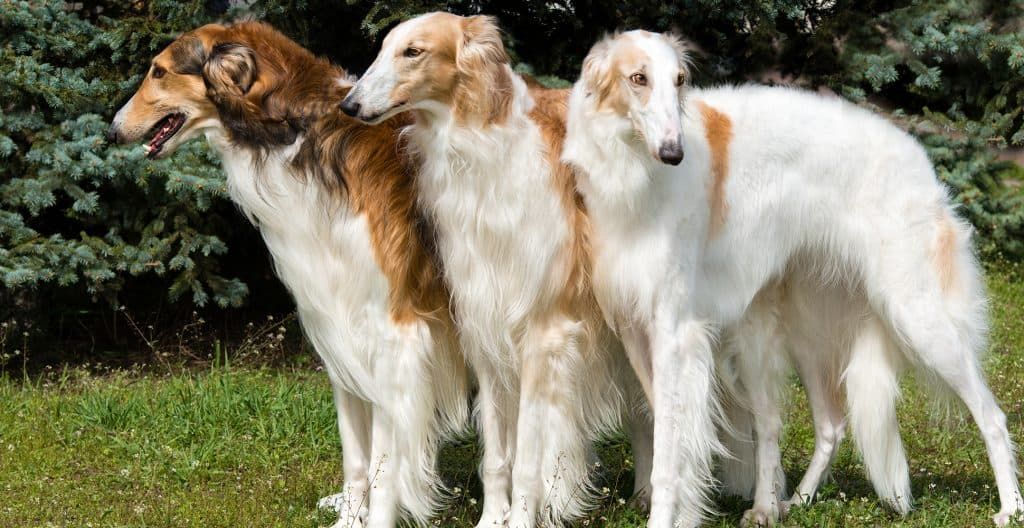 For information on nutrition and diet, chat with your veterinarian or pet nutritionist. Many brands now offer a wide range of different feeds to enable you to choose one which is suitable for your dog’s age, size, and energy requirements.

Bloat can be a fatal condition in large chested dogs such as the Borzoi. It happens when a dog’s stomach becomes full of food or other substances such as fluid or excess gas. It can happen very quickly, and so needs immediate emergency treatment at the vets.

It is often brought on by a dog eating large quantities of food, and so how you feed your Borzoi can play a part in reducing the risk of it occurring. Feeding more than once daily to reduce the amount eaten in one meal is recommended, along with slowing down the rate at which your Borzoi eats, which can be achieved by using food puzzles.

Occasionally Borzoi find themselves needing a new home, and this breed-specific rescue organization steps in to help make the match with a new and lifelong family.

The website of the Borzoi Club of America provides a great resource of information on this elegant breed – https://borzoiclubofamerica.org/