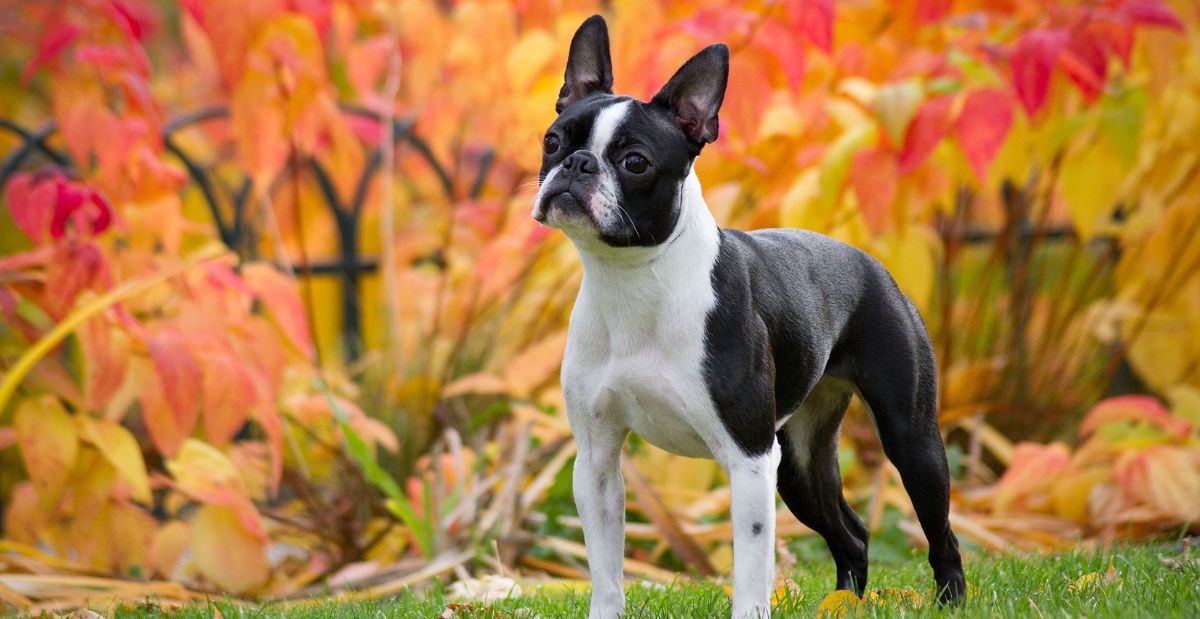 About The Boston Terrier

The Boston Terrier is a distinguished little gent. Its coat resembles a classic tuxedo with its unique colouring and markings of black, seal, or brindle mixed with white. This dog breed is of sturdy construction and is the picture of moderation in appearance.

Considered to be a small dog breed, the Boston Terrier’s weight should not exceed 25 pounds. The breed is easily recognized by its uniquely shaped head, and its eyes contain a brightness that communicate the dog’s natural penchant for fun. Boston Terriers have quite unique movement, trotting along with a spring in their step.

The breed takes its name from the city of Boston where this dog type was refined and further developed after being transported to the country from its native England. The breed makes an excellent companion for city dwellers, adapting well to apartment life. Boston Terriers enjoy the company of people and are equally at ease out for a stroll, playing at the dog park, or sitting in the lap of their owners at summertime barbecues.

Though in its earliest incarnation the Boston Terrier was intended as a fighting dog; today, this little pooch is soft and gentle of nature. The breed has been affectionately nicknamed “the American Gentleman,” a term bestowed upon it in the 1800’s.

The Boston Terrier is an intelligent breed. They know they are cute and use their spiritedness to their advantage. The breed is known to be both loving and affectionate; however, they can also be very obstinate. A breed with moderate activity requirements, the Boston Terrier can burst into spontaneous bouts of frenetic activity, a practice that can frustrate their owners.

In possession of a snubbed nose, the Boston Terrier is considered a brachycephalic breed. This can mean the breed can experience difficulty breathing, particularly during extremely hot or cold weather.

The Boston Terrier makes an excellent family companion. The breed naturally enjoys the company of children and is also well-suited to life with a senior citizen. The Boston Terrier is a good choice of dog for a first-time dog owner. 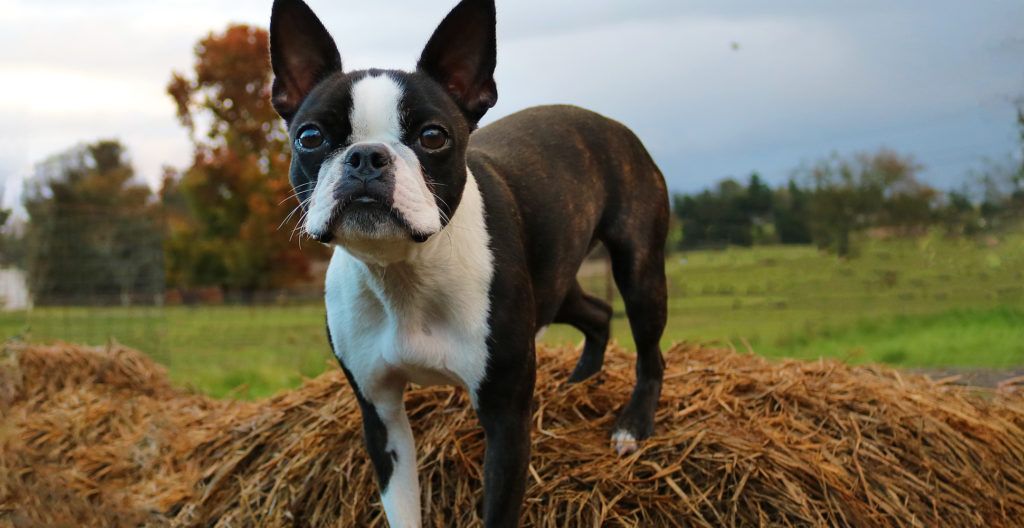 In the 1800’s in England, blood sports were a popular form of entertainment. On the hunt to create dog breeds that were well-suited to pit fighting, many Englishmen applied their hands to developing the ideal dog breed for this purpose. In the pursuit of this goal, a Bulldog was bred to a white English Terrier, and the resulting pairing produced a dog breed of great musculature and fierce temperament.

The dog produced in this mating was then sold to an American gentleman by the name of William O’Brien. Mr. O’Brien travelled to Boston, bringing his new dog with him. The dog then passed hands to another Boston resident named Robert C. Hooper. It is this dog that became the foundation of the breed we now know as the Boston Terrier.

The original dog upon which the breed was founded was named Judge. Judge has been described as weighing 32 pounds and being of sturdy construction. Hooper sought to refine the breed further and thus decided to breed Judge to a white female of small stature. Her name was Burnett’s Gyp.

Burnett’s Gyp was owned by a Mr. Edward Burnett. Today, nearly all Boston Terrier stock can be traced back to these two dogs: Judge and Gyp. Great care went into future breedings to soften the temperament of this dog breed once regularly employed as a ratter and pit fighter. Other changes were also sought including a smaller body and a more pleasing appearance.

The breed was named for the place where it received its most development: the city of Boston. Today, the breed is considered the mascot of Boston University. The year 1979 saw the Boston Terrier selected as the state dog of Massachusetts. The adult Boston Terrier stands between 15” and 17” at the shoulder. The ideal Boston Terrier’s weight range spans from 12 to 25 pounds. This breed should never exceed 25 pounds as a maximum weight.

A breed considered to be brachycephalic because of its snubbed nose, the Boston Terrier does not do well in extreme heat or cold. Families must be prepared to exercise this stately gentleman when the weather conditions are moderate. 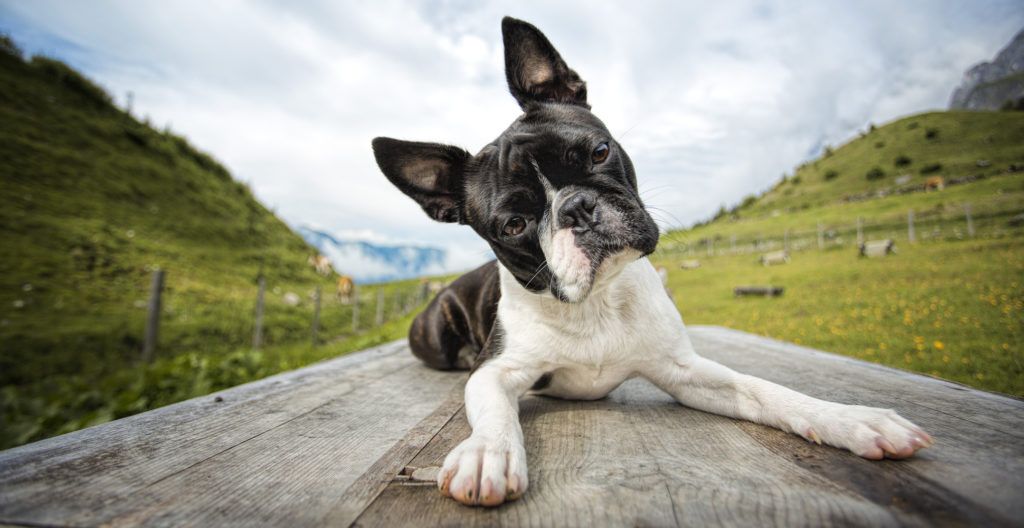 The Boston Terrier’s temperament is consistently good-natured. The breed can be prone to obstinate behaviour which can make it a challenge to train. The Boston Terrier requires an owner that will apply themselves to helping this dog breed learn.

The Boston Terrier is intelligent but can be very wilful. A dog that knows it is hard to resist, the Boston Terrier will use its good looks and charm to get out of doing things it doesn’t want to do.

This adorable breed, which is often referred to as “the American Gentleman,” has a deep fondness for children. The breed’s body is strong enough to be able to withstand roughhousing with younger children; however, all kids should be taught to handle this small breed appropriately. To this end, it is recommended that all play between dogs and kids be carefully supervised.

The Boston Terrier loves the company of other animals. On occasion, there may be displays of aggression between two dogs of the same sex, but this does not happen often. To ensure harmony amongst all pets, all initial introductions should occur in a neutral setting.

A small breed, the Boston Terrier adapts well to life in an apartment but is equally as happy in a home with a fenced yard in which to play. The breed is well-suited to life with first-time owners, families with children, and even senior citizens.

A breed that bonds deeply with its family, the Boston Terrier does not enjoy spending much time alone.

The Boston Terrier is a brachycephalic breed, and thus, should not be left outside in extreme heat or cold. The Boston Terrier is a breed that typically enjoys good health. However, as with all dog breeds, the Boston can be prone to certain genetic health conditions. To prevent the spread of inherited illness, all Boston Terriers intended for breeding should be thoroughly screened prior to any matings. The conditions that can befall the Boston Terrier include cataracts, cherry eye, patellar luxation, heart murmurs, congenital deafness, brain tumours, allergies, and megaesophagus.

Boston Terriers have very low grooming requirements. To keep the coat in good condition, the dog should be brushed once a week. Odours can be kept to a minimum through the use of a good quality dry shampoo. When the dog is exceedingly dirty, it can be bathed.

Since the Boston Terrier possesses very large eyes which protrude from the face, care must be taken to keep them clean and protected. All skin folds should be cleaned with a damp washcloth and properly dried each day to prevent the growth of bacteria or yeast.

The Boston Terrier is a breed that does shed; however, it does not shed much.

Nail trims should be done at least once a month to maintain good foot health. Regular ear cleaning and dental care are also critical components of a health and wellness program for the Boston Terrier.

The Boston Terrier is not typically a dog breed that is prone to weight gain nor is it much of a drooler. 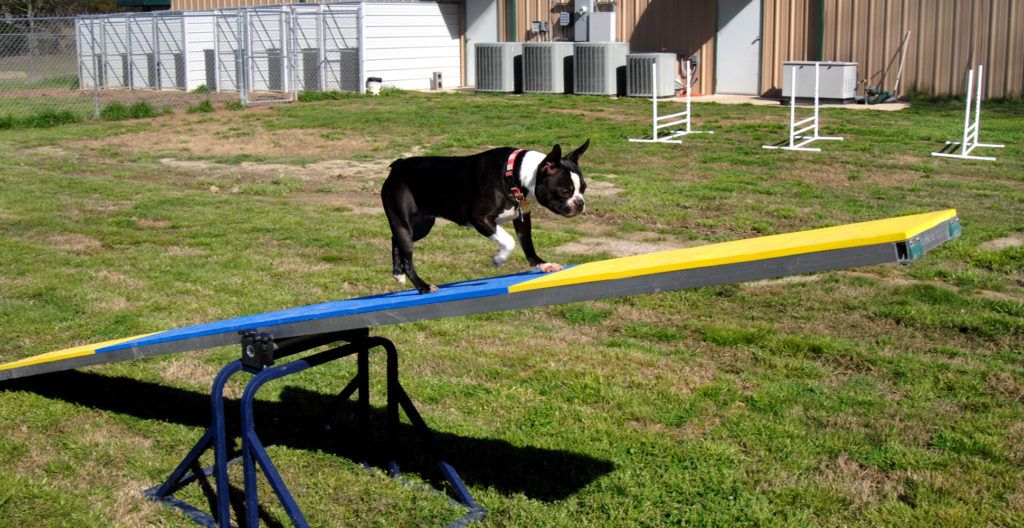 The Boston Terrier is a breed that has much to benefit from early socialization and organized training classes. The breed can be obstinate but is intelligent enough to learn new skills quickly if sufficiently motivated. The average Boston Terrier can learn the basic obedience commands in as little as four weeks.

The Boston Terrier is a sensitive little lad. Harsh training methods should be avoided with this soft-hearted breed. Positive reinforcement techniques are the best approach for this type of dog. Food rewards provide extra motivation for learning.

The Boston Terrier is a breed that is not particularly mouthy. Still, care should be taken to teach the appropriate use of the mouth and teeth. This can be achieved by simply redirecting the dog’s mouth to a toy, ball, or bone should the pup attempt to bite or nip.

The Boston Terrier is not particularly prey-driven but does enjoy the opportunity to roam. With this in mind, a secure containment system is an absolute must for this breed.

The Boston Terrier is a dog that barks or howls only moderately. The Boston Terrier is a dog that has moderate activity needs.  However, the breed is highly individual with some dogs requiring more activity than others. On average, it is best to take the Boston Terrier for a walk of approximately 20 to 30 minutes each day. If this is not sufficient, a second walk can be added or additional play time included in the dog’s day.

The Boston Terrier should never be left unsupervised as a bored Boston will get up to mischief. The breed is very playful and enjoys such games as tug and fetch. The Boston Terrier is also suited to many different dog performance sports including Rally, obedience, flyball, and agility. To ensure the Boston Terrier’s nutritional needs are adequately met, it is an excellent idea to consult the advice of a veterinarian. Most Boston Terriers do very well on a diet that is comprised of high-quality ingredients, and that is properly balanced to meet the needs according to the dog’s age, activity level, and health condition.

Puppies should be fed an appropriate puppy food to support their growth and development. Adults should eat adult food that has been designed with their unique needs in mind.

Determining the amount of food to feed a Boston Terrier is not difficult. The bag of food will offer suggested serving sizes. Use these as a rough guideline, adjusting as needed to reflect the activity level of the dog. The dog’s weight and appetite will help with ascertaining the correct portion of food and the frequency with which meals should occur. For more information about Boston Terriers for adoption near you, we recommend the following comprehensive resource: