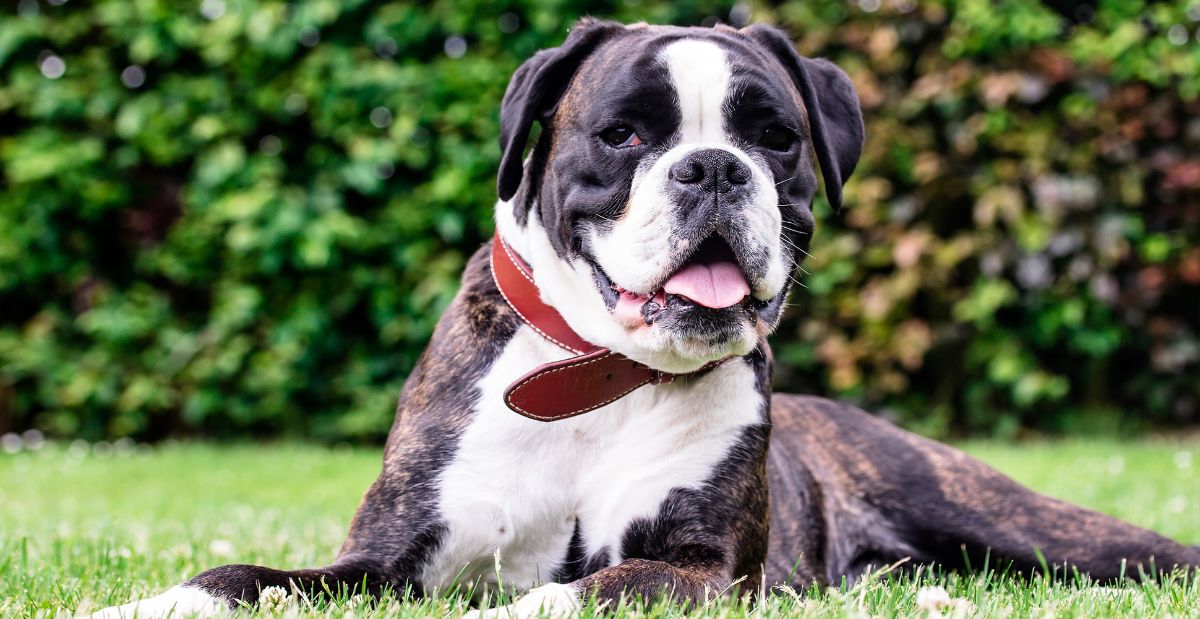 The Boxer is an impressive looking breed whose muscular physique communicates both strength and power. However, the Boxer is a clown at heart. A breed that delights in getting up to mischief, the Boxer loves to play and has vast resources of energy to burn each day. A dog type that enjoys a lengthy puppyhood, the average Boxer does not reach maturity until approximately age three.

The Boxer is a highly social breed with the brains to back up its brawn. Once employed as guard dogs, the Boxer’s keen sense of hearing makes it alert to sounds and in possession of the courage to defend its family if called upon to do so. Boxers are a unique combination of sensitive and stubborn and respond best to positive reinforcement training techniques.

Boxers are kind and gentle with children, making them an excellent family dog. However, the Boxer is a breed that has high activity requirements and will need daily physical and emotional stimulation to remain contented. Though the Boxer prefers a fenced space in which to roam, the breed can thrive in an apartment so long as sufficient daily activity is provided.

Traditionally, Boxers have cropped ears and docked tails. However, more and more, breeders are opting to leave the Boxer’s ears and tail natural. Though the breed can come in white, this colour is not preferred as dogs of this hue can be predisposed to congenital deafness.

A dog breed that is intensely dedicated and affectionate with its family, Boxers are naturally wary of strangers, meaning a little time and effort will be required for a friendship to form. Boxers bond very deeply to their owners and prefer to be as close to them as possible. As a result, the breed is not suited to spending lengthy periods alone.

A truly happy breed, the Boxer’s lively nature is a delight to behold. The breed is characterized by its own distinctive dance called the “kidney bean.” The Boxer can be a vocal dog and makes its own unique sound which is similar to a “woo” rather than a bark or howl.

The Boxer is a powerful dog that is known for its strength and bold nature. The breed is a popular choice for both military and police work due to its intelligence and bravery.

Since the Boxer possesses very little coat, the breed is not suited to spending time outside in extreme temperatures. Its natural affection for its family means this pooch should live indoors in close proximity to those it loves. Due to their “snub nose,” Boxers can also experience breathing difficulties in extremely hot or extremely cold weather.

The Boxer descended from an ancient group of German dogs known as Bullenbeissers. The Bullenbeisser is closely related to the Mastiff.

The Bullenbeisser’s original purpose was a powerful hunting dog. This dog type was most commonly put to work assisting with hunts for wild boar, deer, and even bear. The dog’s role on a hunt was to grab a hold of the prey and keep it in place until the hunters discovered them. When this type of hunting fell out of vogue, the Bullenbeisser was then employed as a livestock guardian for farmers.

The dog type we now recognize as the Boxer is a product of the 19th century. A gentleman named Georg Alt is credited with the development of this popular breed. Mr. Alt made the decision to breed a female Bullenbeisser of brindle colouring to a dog whose heritage was largely unknown. The resulting offspring included a stunning male that became the foundation of the Boxer breed.

In the late 19th century, the Boxer made its way to other European countries. It is believed the Boxer first came to the United States in 1902 where the breed was recognized by the American Kennel Club in 1904.

During World War I, the Boxer fought alongside soldiers, fulfilling such important roles as carrying messages, transporting supplies, and providing protection. The Boxer was also employed as a guard dog at this time.

Today, the Boxer enjoys its popularity as one of the top ten breeds in the United States. 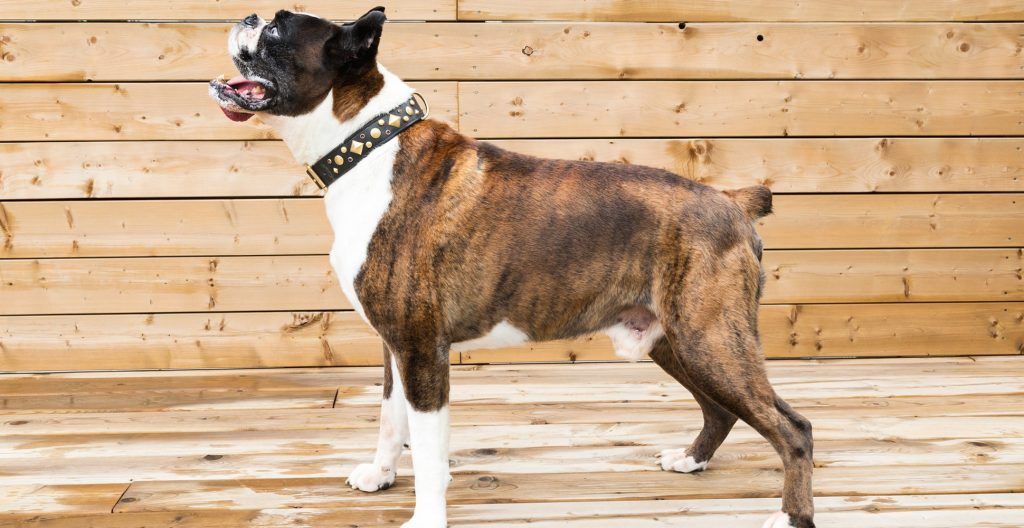 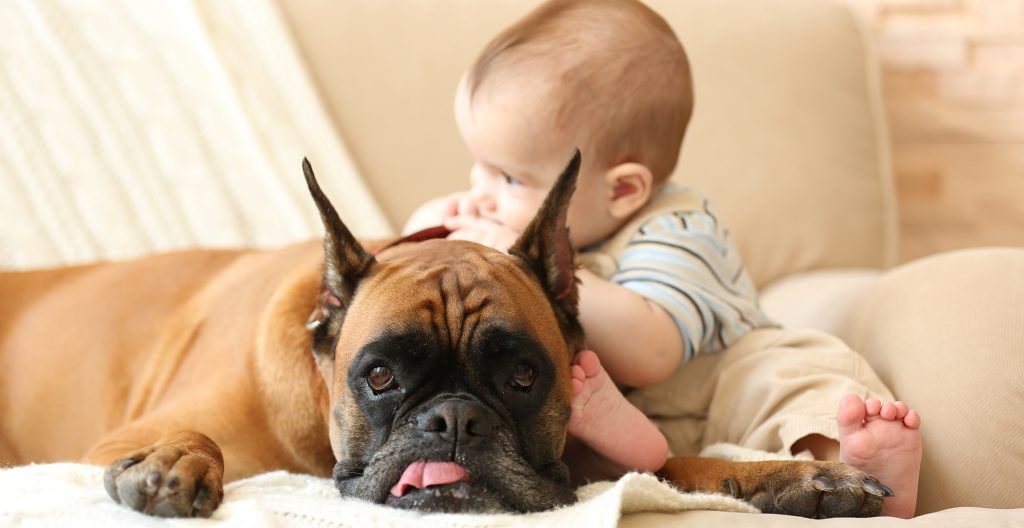 The Boxer makes an excellent guard dog and is always on high alert for the presence of unusual noises. A breed that bonds deeply with its family, the Boxer takes great pleasure in entertaining the people it loves. The Boxer enjoys the company of children and is gentle and patient with them.

Though the Boxer views strangers with suspicion, they will greet newcomers with a polite demeanour. The Boxer should never display aggression unless the dog is compelled to defend its territory or people.

Integrating a Boxer into a home with family pets proceeds well if approached with caution. Most typically, the Boxer enjoys the company of other dogs and cats. To ensure a harmonious household, it is recommended that a Boxer puppy be introduced to its housemates in a neutral setting such as a public park or a veterinary clinic.

Though Boxers and children are natural friends, all interactions between the dog and kids should be carefully supervised. Due to the breed’s size and tendency towards rowdy, clown-like behaviour, the Boxer is best suited to families with older children.

Boxers are quite in tune with their families, actively seeking to be in their presence as often as possible. For this reason, the Boxer is ill-suited to spending much time on its own.

Boxers can be content living in an apartment so long as the dog is taken out for daily exercise to ensure its mental and physical needs are met. However, the Boxer is not a breed that thrives in the great outdoors when the weather is particularly hot or cold. The Boxer’s facial conformation means the breed can be predisposed to breathing problems in extreme temperatures. 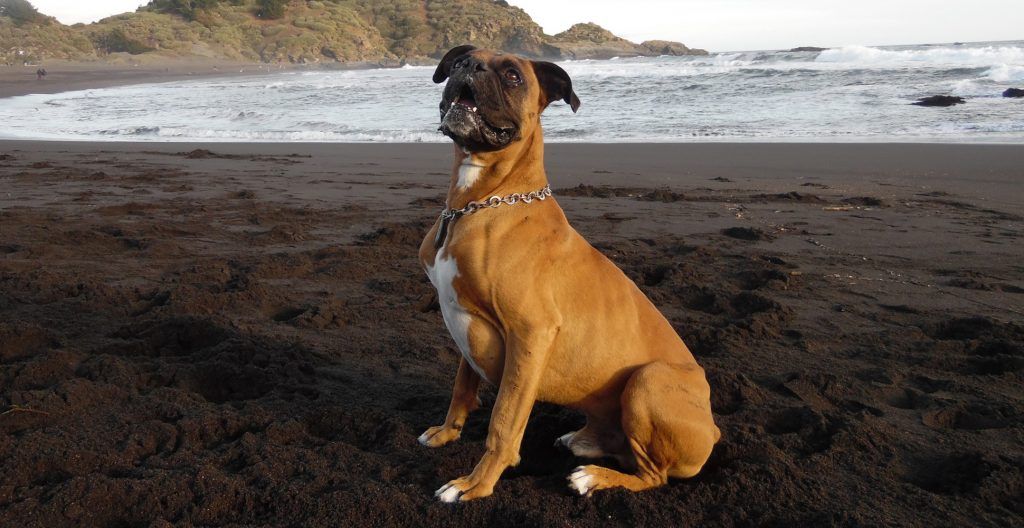 Boxers are a breed that normally enjoys good health. However, there are some genetic diseases this dog type can be predisposed to. Proper genetic screening of all breeding pairs can help to eliminate the spread of inherited conditions to future offspring. Among the health problems which can plague the Boxer are cancer, aortic stenosis/sub-aortic stenosis (AS/SAS), boxer cardiomyopathy (BCM), hip and elbow dysplasia, hypothyroidism, corneal dystrophy, demodectic mange, gastric dilatation-volvulus, allergies, and congenital deafness.

The Boxer possesses a short coat which is extremely low maintenance. Most breeders recommend a simple wipe down with a hound glove several times per week to maintain the coat in excellent condition.

The Boxer is not a breed that is prone to get dirty. Therefore, bathing can occur on an as needed basis. Nails should be done at least once a month. Regular dental care and ear cleaning are also an important component of health and wellness for this breed.

As with most breeds if underexercised or overfed, the Boxer can easily gain weight. To ensure a good body condition, all food and treats should be carefully monitored and adjustments made if weight gain occurs.

The Boxer is a mild drooler; however, it is a breed that is known to shed fairly heavily. Weekly brushing will help cut down on this. 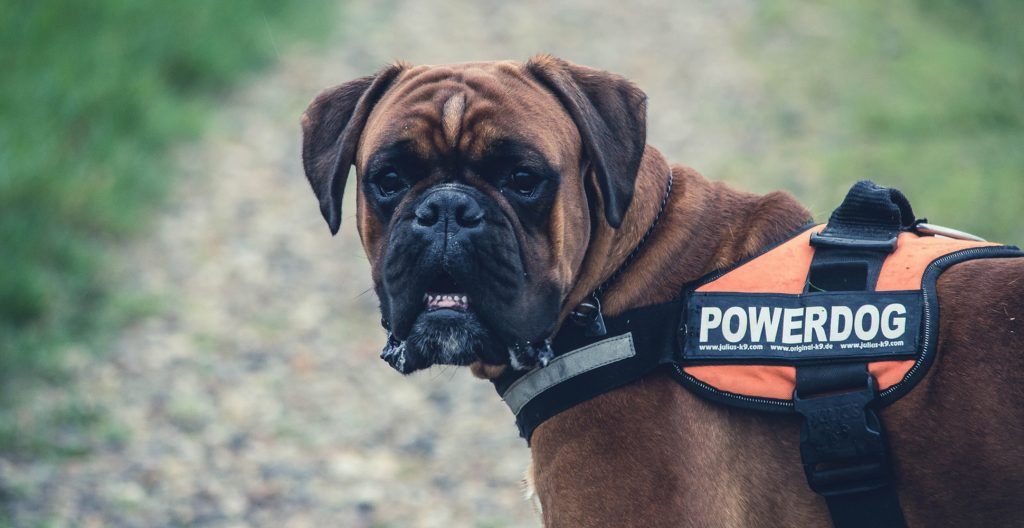 Due to the natural exuberance of the Boxer, both puppy socialization and obedience classes are recommended for this breed. A breed of high intelligence, the Boxer requires sufficient motivation to engage in training exercises. The average Boxer can easily learn the basic obedience commands in as little as three weeks.

Boxers can be very independent of mind and will often seek their own novel solutions to challenges they face. The breed can be prone to same sex aggression, so care must be taken to socialize the Boxer as a puppy with other dogs with appropriate canine manners to prevent this from occurring.

The Boxer is a natural athlete and is exceptionally strong. Among the activities this breed excels at include obedience, agility, herding, therapy work, and scent detection.

Boxers are an extremely sensitive breed. For training attempts to be successful, positive reinforcement training is the best approach. Boxers will shut down under harsh corrections.

Boxers are not a tremendously mouthy breed; however, it is important to teach the Boxer to use its mouth appropriately. To best accomplish this, it is wise to redirect the Boxer to a toy, ball, or bone when the dog’s teeth come in contact with skin. Over time, the dog will learn how to use its mouth in a polite fashion.

Since the Boxer was originally a hunting dog, the breed does possess some prey drive and will chase small animals if given the opportunity to do so. They have a moderate tendency to roam, and thus, must be kept securely contained.

The Boxer can be a vocal breed and makes its own distinctive sound which is similar in sound to a “woo.” Boxers enjoy time indoors with their families but also need to stretch their legs in the great outdoors every day. A dog breed that possesses both a short nose and a tight-fitting coat, the Boxer does not thrive in extreme heat or cold. A jacket or coat is a good idea for this breed if out exercising in cold weather conditions.

The Boxer is an exceptionally playful breed that delights in playtime with its family. To ensure the Boxer remains in good physical condition, this dog breed should be walked twice daily for a minimum of half an hour each time. Other activities that will help the Boxer to burn its substantial stores of energy include dog sports such as agility or flyball.

Since the Boxer was originally a hunting dog, the breed does possess prey drive and will chase small animals if given opportunity to do so. For this reason, the Boxer should never be allowed off lead outside of a fully fenced in space. 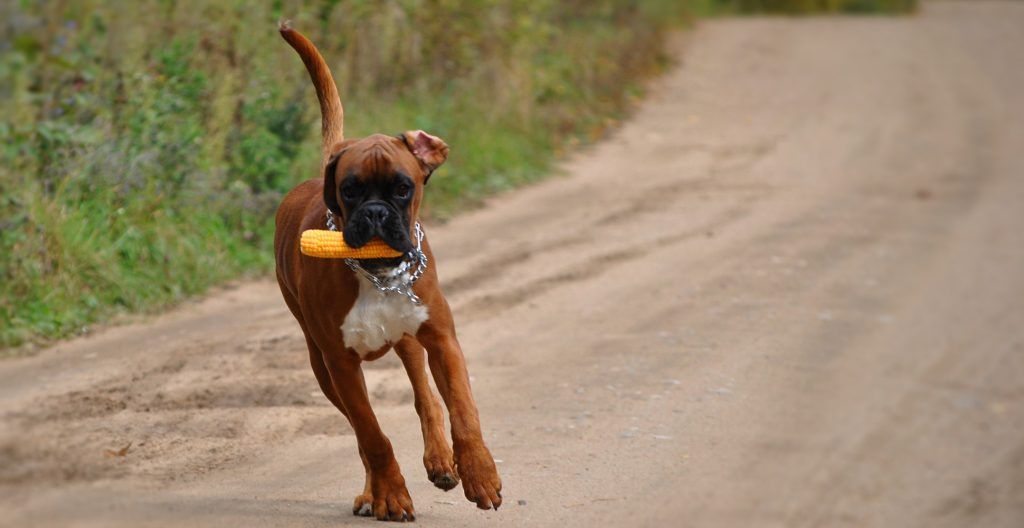 To ensure the nutritional needs of the Boxer are properly met, it is an excellent idea to consult with a veterinarian. Typically, the Boxer excels on a high-quality diet that is nutritionally balanced and appropriate to the dog’s age, health condition, and activity level.

To determine how much food to feed a Boxer, it is a good idea to use the suggested serving size listed on the bag as a guideline. Meal amounts and frequency can then be adjusted according to the dog’s activity level. The dog’s weight and appetite can serve as very helpful guides.

For more information about Boxers available for adoption near you, we recommend the following comprehensive resource: