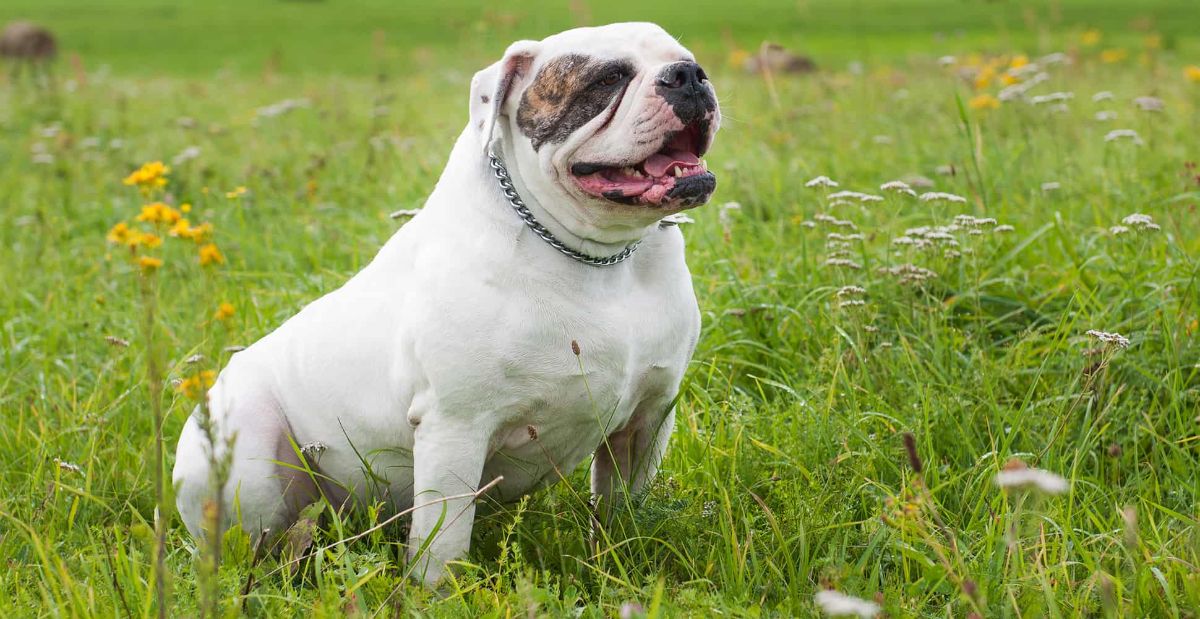 The distinctive-looking Bulldog is one of the most beloved breeds worldwide. A dog breed chosen as the representative of the country of England, the U.S. Marines, and Yale University to name only a few places, the Bulldog has become a worldwide symbol of persistence and strength.

The Bulldog, a breed hailing from England, is also often referred to as both the English Bulldog or the British Bulldog. Its history is riddled with blood as a dog that traces its roots to a strain of Roman mastiffs whose primary purpose was to engage in the common sport of the day known as bullbaiting. Today’s Bulldogs have a much gentler disposition, preferring life as a pampered pooch on the couch to its fighting days on the British Isles.

The Bulldog is considered a medium-sized breed and is immediately recognizable by its thick body which rests low to the ground. Another hallmark of the breed is its block-shaped head with its unique short muzzle. A breed known for the width of its chest, the Bulldog possesses a great deal muscle, making it immensely strong.

The musculature of the Bulldog encourages a gait that is unique to this breed. Stocky of body and in possession of short legs, the Bulldog has its own unique shuffle which is similar to a waddle. Because of the distinctive shape of the Bulldog’s body, many females have difficulty whelping their puppies naturally and must bear them via c-section.

In spite of their fearsome looking appearance, Bulldogs are known for being amiable and gentle of nature. Though they are brave in the face of danger, they are calm of spirit and intensely playful. A breed that bonds deeply to its people, Bulldogs will eagerly defend those they love. Bulldogs are a very sociable breed and actively seek out opportunities to spend time with their families.

The Bulldog enjoys immense popularity around the world. The breed is not for an overly active family, preferring the comforts of the couch to vigorous activity. Though they love children and can be very playful, they are a low energy breed and require only minimal activity to remain healthy. Due to their low activity requirements, Bulldogs are well-suited to apartment living.

This breed would be an excellent addition to families with children as well as first time dog owners. However, training can be an issue as the Bulldog has a mind of its own and can be very stubborn and hard to motivate.

It is believed that Bulldogs were first developed in the 13th century during the reign of King John in England. The breed’s original purpose was for engagement in bullbaiting, a common sport of the day in which a tethered bull battled a group of dogs with onlookers placing bets on who would be named the victor. Many purported that bullbaiting played an important role in helping to tenderize the animal’s flesh, a valuable component of its later slaughter for sale as meat. The original prototype of the Bulldog was immensely powerful, courageous, and able to withstand incredible amounts of pain.

In 1835, bullbaiting became a banned activity, forcing the sport into out of sight venues. In time bullbaiting was abandoned in favour of dogs fighting against other dogs in pits. Since a more agile type dog was necessary for this type of sport, dog fighters began experimenting by breeding different strains of terriers to the Bulldog to create their ideal fighting dog with the gameness and speed to succeed. This breeding resulted in the early development of such breeds as the Staffordshire Bull Terrier and the Bull Terrier.

With the Bulldog no longer needed for sport, the breed soon fell into danger of becoming extinct. Aficionados of the breed undertook revitalizing the Bulldog by combining dogs with softer temperaments to produce dogs that were best suited to family companionship. While seeking to improve on the Bulldog’s personality, these early Bulldog lovers also worked on softening the dog’s appearance. The end result was a laidback, affectionate pet with a deep fondness for children.

Long claimed as the canine representative of its native England, the Bulldog’s jowly, feisty spirit was once likened to that of Prime Minister Winston Churchill. 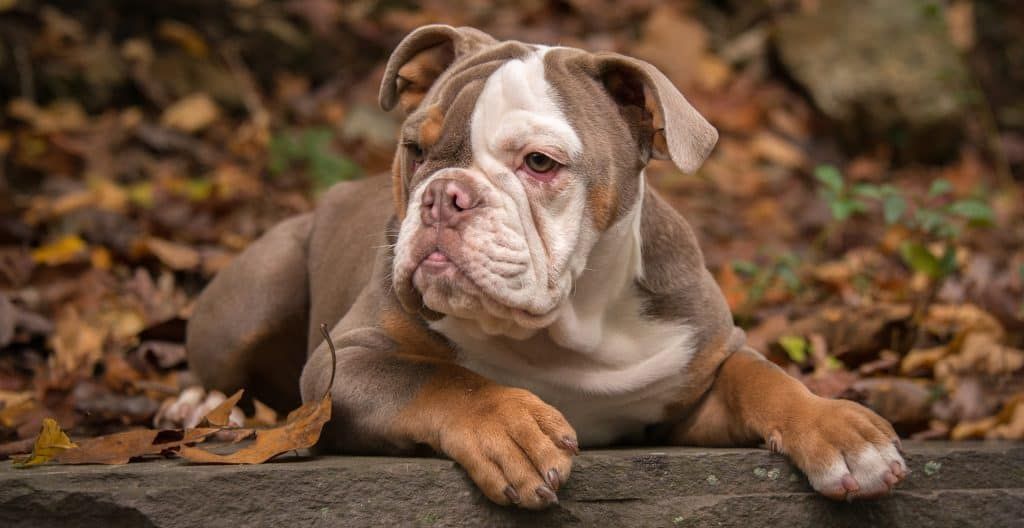 Adult male Bulldogs should measure between 14”-15” at the shoulder and weigh no more than 50 pounds. By comparison, female Bulldogs maintain the same height as their male counterparts but weight 40 lbs at full maturity. Show dogs are permitted to carry up to 10 additional pounds on their frames as is appropriate for their height.

A medium-sized dog breed, there are no special considerations owners must factor into their plans for owning a Bulldog. However, since breathing issues can be common in the breed, it is important to maintain a healthy weight. 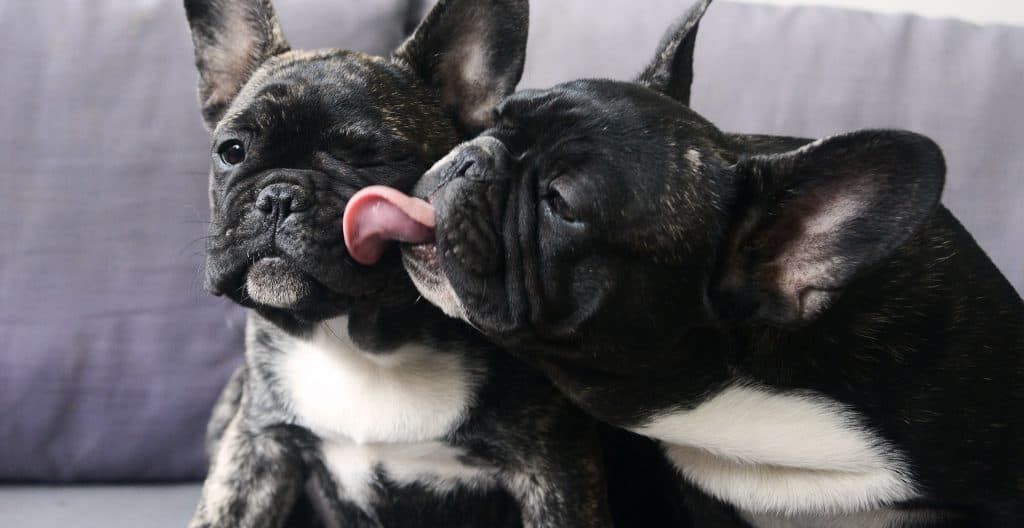 The affectionate Bulldog is both loving and sweet. A breed that thrives in the company of people, the Bulldog is equally at ease with its family and strangers who it greets with eager enthusiasm. The Bulldog is a brave soul that will provide protection for its family if called upon to do so. However, the Bulldog of today has no interest in fighting; it is much more content cuddling on the couch.

The Bulldog is well-suited to any type of living situation, including apartments. Its easygoing temperament makes the breed a joy to live with. However, it should be noted that Bulldogs are well-known wheezers, sneezer, and snorers. They are also renowned for having excessive gas.

Bulldogs do not always get along well with other pets. Early socialization is recommended to help the Bulldog learn proper canine manners and to encourage the dog to view other dogs as friends rather than foes. To introduce a Bulldog puppy into a home with already established pets, it is best to do it at a neutral location such as the vet’s office or a public park to reduce the tendency for territorial behaviour.

A kind and gentle soul, the Bulldog loves the company of children. An extremely patient breed, the Bulldog is tolerant with slightly rough handling and will simply remove itself from the situation if it is feeling uncomfortable. All interactions between the child and a Bulldog should be supervised for the safety of both parties. In addition to this, children should be taught to respect their dog and to handle it with great care.

Bulldogs are not a breed that do well in extreme weather conditions due to their small nostrils, facial conformation, and tendency towards breathing problems. This breed is best suited to living indoors with its family. 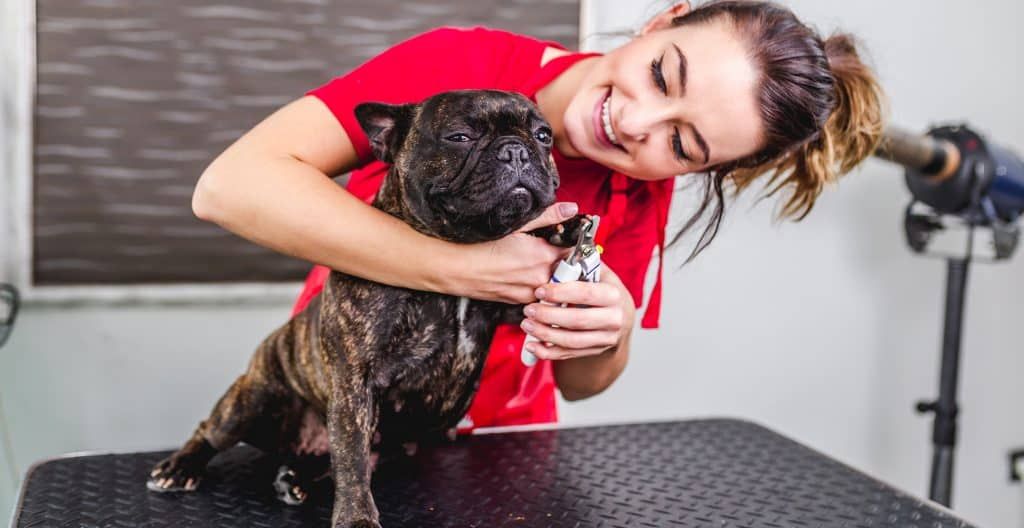 Unfortunately, the Bulldog is a breed that is prone to a vast number of health conditions. Many of them are genetic, and appropriate testing can be conducted on any potential breeding pair to reduce the risk of passing inherited disease to the next generation. The main health issues Bulldogs can be predisposed to include cherry eye, dry eye, entropion, brachycephalic syndrome, head tremors, demodectic mange, hip dysplasia, tail problems, and patellar luxation.

Another health concern potential owners should watch for is overheating. Because Bulldogs can suffer from breathing problems, excess heat can lead to serious health complications. During hot weather, Bulldogs should be kept indoors with access to plenty of fresh drinking water. Excess exercise is not encouraged in climates known for extreme heat.

The Bulldog has moderate grooming requirements. To keep the Bulldog’s coat in good condition, it should be brushed with a soft, boar bristle brush several times each week. The Bulldog will shed a moderate amount of coat, but regular brushing will help reduce this.

Because the folds on a Bulldog’s face can trap and harbour bacteria, they should be kept clean and dry at all times. Experts recommend the use of a peroxide-soaked cotton ball to clean the folds then some cornstarch to eliminate any added moisture. Nails should be trimmed each week.

Baths are typically not necessary unless the dog becomes dirty or rolls in something unpleasant. Regular dental care and ear cleaning are also components of keeping the Bulldog in good condition.

The Bulldog is a breed that loves to eat and will eat far beyond the point of being full if given the opportunity. For this reason, all food and treats should be carefully measured to prevent excess weight gain. In addition to this, the Bulldog drools profusely; something families will need to be prepared to deal with. 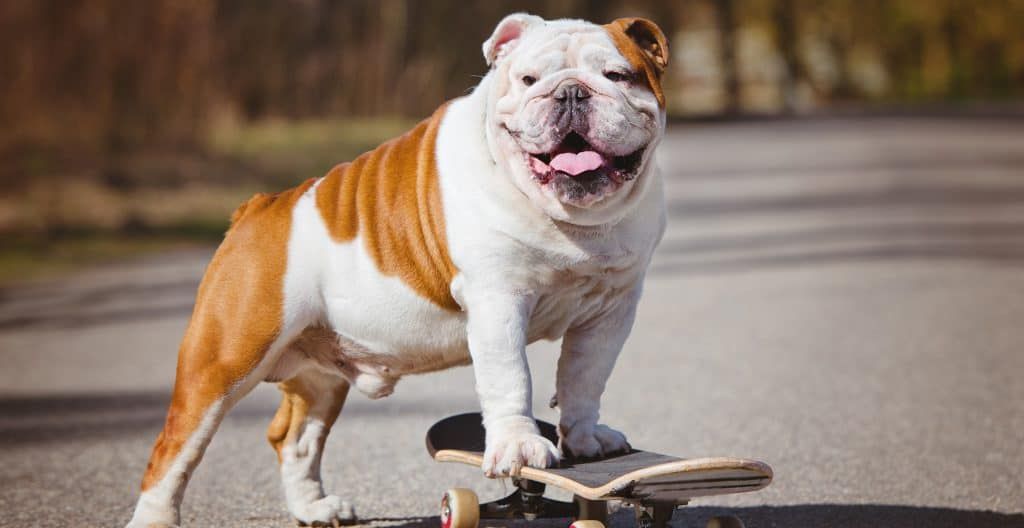 By nature, Bulldogs are eager to please. Their love for treats makes them amenable to training opportunities. However, Bulldogs are not the most intelligent breed, and they can be stubborn. For this reason, teaching a Bulldog the basic obedience commands could take as long as several months or more.

Bulldogs are excellent candidates for puppy socialization classes and organized obedience training. These two classes will teach the Bulldog appropriate interactions with other dogs and basic life skills that could help to save its life such as the sit, stay, and come commands.

This breed is known for being exceptionally mouthy and loves to chew anything it can get its teeth into. For this reason, it is important to redirect a Bulldog’s attention from skin or undesirable objects to more appropriate things such as toys or bones.

A breed with both low energy and low drive, the Bulldog is not likely to wander or to attempt to chase prey. The breed is not known for barking or howling. 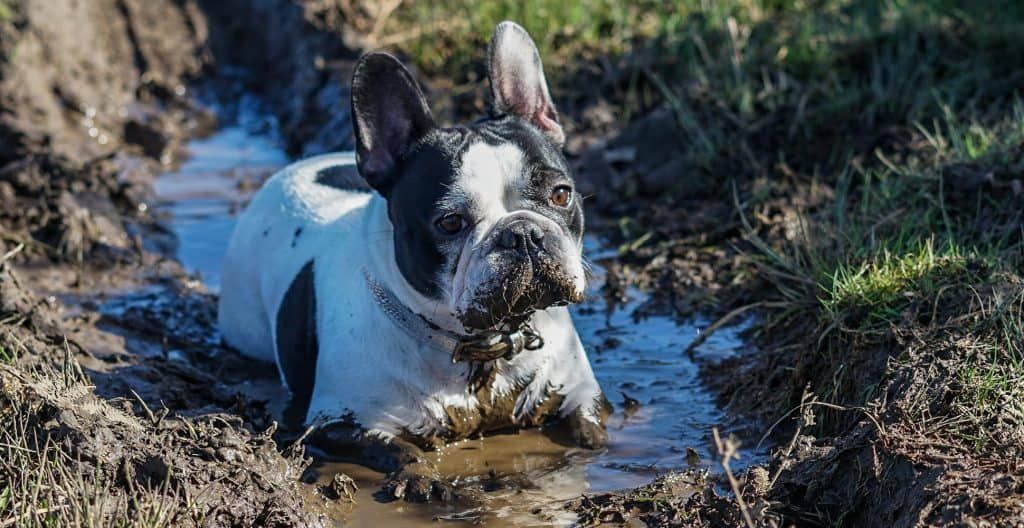 The Bulldog is a low energy fellow that requires only moderate activity at the most. Walks are the Bulldog’s favourite activity. A walk of no more than 20 minutes per day at a leisurely pace is sufficient to keep the Bulldog in good body condition. During bouts of extremely cold or extremely hot weather, outdoor exercise plans should be abandoned.

Stairs and pools can be problematic for the Bulldog, so care must be taken to never allow this dog type to navigate either of them without proper supervision. Though Bulldogs enjoy the water, they can quite easily drown in shallow water due to their breathing restrictions.

The Bulldog is an immensely playful character that thrives when given opportunity to enjoy a game of tug with its family. 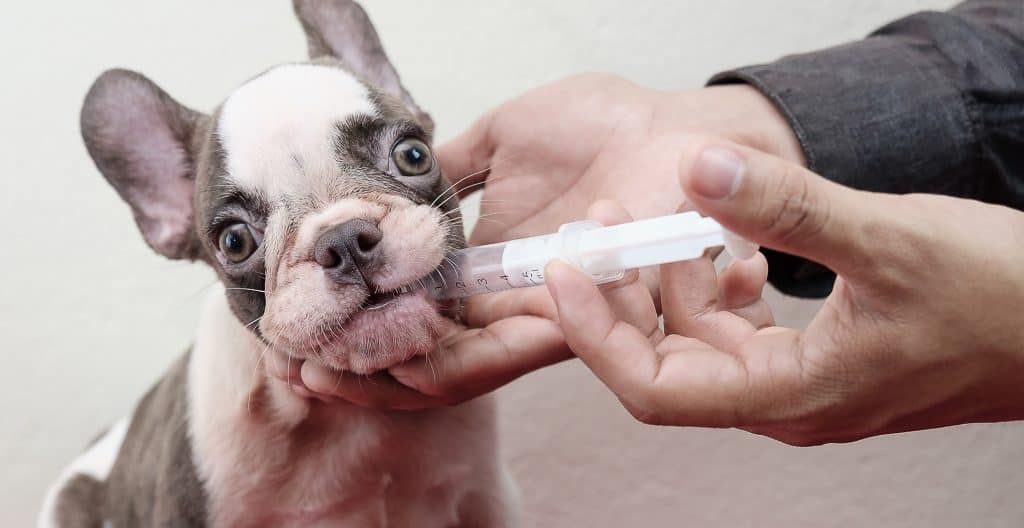 To best understand the right type of food for a Bulldog, it is always wise to consult with a veterinarian. In general, Bulldogs do well when fed a high-quality, nutritionally balanced dog food that is appropriate for their age and health condition.

Puppies should always be fed puppy food since it is specifically formulated to address the needs of the developing body of a puppy. Likewise, adults should be fed an appropriate formulation for their age and activity level.

To gauge how much to feed a Bulldog, the bag of food selected can provide an excellent guideline through its suggested serving sizes. This is a basic starting point and should be adjusted to reflect the activity level of the dog. 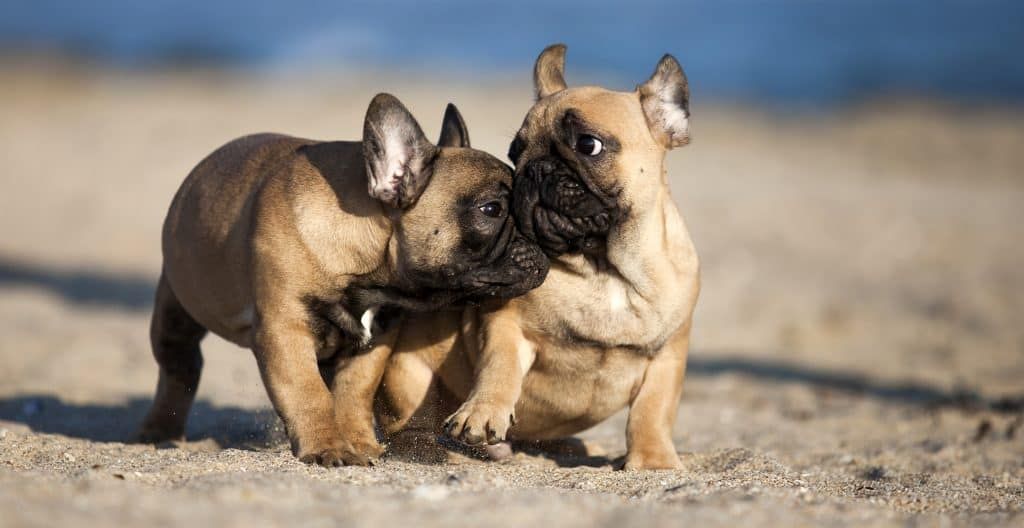 For more information about where to locate a Bulldog for adoption near you, we recommend the following resources:

The Bulldog Club of America