If you’ve ever noticed your dog kicking their back legs while lying down, playing, or even during a walk, you might be wondering why they do it.

There are a few different reasons that your dog might kick their back legs, and understanding the reason can help you better care for your pup.

Another reason that your dog might kick their legs back is because they’re itchy. If your dog has been scratching a lot or seems to be bothered by something on their skin, leg kicking may help them relieve the itchiness. Essentially it’s just a scratch reflex.

Just like humans, dogs need to stretch their muscles occasionally. Kicking their back legs back is a way for dogs to relieve a muscle spasm and stretch out their hips and hind legs.

Interestingly, your dog’s paws can also do this through their sweat glands. This scent marking habit also marks their territory.

Dogs often kick their back legs when playing with toys or other dogs. This behavior is instinctual and helps them pounce on their prey.

6. Your Dogs Kicking Could Indicate a Health Condition

Sometimes, kicking back legs can be a sign of a health problem such as hip dysplasia, arthritis, or nerve damage. If your dog is limping or seems to be in pain, make an appointment with your veterinarian to have them checked out.

If your dog is kicking their back legs while cowering or trying to hide, it’s likely that they’re feeling frightened of your dog feels threatened. This behavior may be a sign of abuse or neglect.

8. They Want Your Attention

Dogs are very intuitive and can quickly learn what behaviors get them the attention they crave from their owners. Dogs communicate through action, so if you’ve ever given your dog a treat or petted them after they’ve kicked their back legs, they may have learned that this behavior gets them what they want.

10. They Have Extra Energy

If your dog is full of energy and is constantly running around and showing you their wagging tail, they may kick their back legs as a way to release some of that excess energy.

Dogs have much better hearing than humans, and they may kick their back legs in response to a sound that they hear. This behavior is instinctual and helps them protect their pack.

Like their hearing, dogs also have a much better sense of smell than humans. If they smell something that interests them, they may kick their back legs in response.

Dogs often kick their back legs while sleeping, and this behavior is most likely due to dreaming. When dogs dream, they may act out the behaviors that they’re dreaming about such as running or playing fetch.

15. They Have Separation Anxiety

Many dogs suffer from separation anxiety, and kicking their back legs is one way that they may try to cope with this condition. Dogs with separation anxiety may also pace, bark, or whine when their owners leave them alone.

Is it a good thing when dogs kick their leg?

There is no definite answer to this question since every dog is different. Some dogs may kick their legs back as a way to relieve an itch while others may do it because they’re bored. Ultimately, you’ll need to observe your dog’s behavior to determine whether or not kicking their legs back is a good thing.

Do all dogs kick their legs back?

No, not all dogs kick their legs back. This kicking behavior is more common in certain dog breeds such as Cocker Spaniels and Labrador Retrievers.

Why does my dog kick back his legs when lying down?

There are a few reasons why your dog may kick their legs when lying down. It could be that they’re trying to scratch an itch, they’re playing, they could have muscle spasms or they have a health condition.

Why does my dog kick his legs back when I pet him?

Your dog may kick their legs when you pet them because they’re enjoying the attention. Dogs are very intuitive and can quickly learn that certain behaviors get them the results they want.

Why does my dog kick his legs back when I scratch his belly?

Your dog may kick their back legs when you scratch their belly because they’re enjoying the sensation. This behavior is similar to that of a human when they’re getting a massage.

Why does my dog kick his legs back when playing?

Dogs often kick their back legs when playing as a way to release energy. If your dog is constantly running around and seems to have a lot of energy, this may be why they’re kicking their legs back.

Why does my dog kick their back legs like a bull?

There is no specific reason why your dog may engage in a bull kicking motion. This behavior may be due to a combination of factors such as boredom, excitement, or fear.

If you notice your dog kicking their back legs, it’s important to pay attention to the other signs and behaviors they’re exhibiting. This will help you determine why your dog is doing this and whether or not it’s a cause for concern.

Understanding why your dog kicks their back legs can help you as dog parents care for them, and make sure that they’re happy and healthy. If you’re concerned about your dog’s health, make an appointment with your veterinarian. 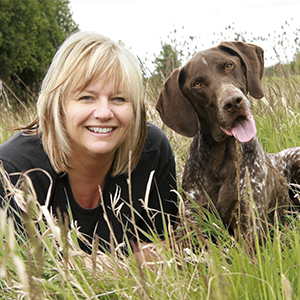 Becky Simmonds is a professional dog trainer and behaviorist. In her local community she's known as the 'dog whisperer'! Her innate ability to understand and communicate with dogs (even if they're not hers) is quite incredible! Becky's loyal companion Chip, a German Shorthaired Pointer accompanies her on her daily adventures!