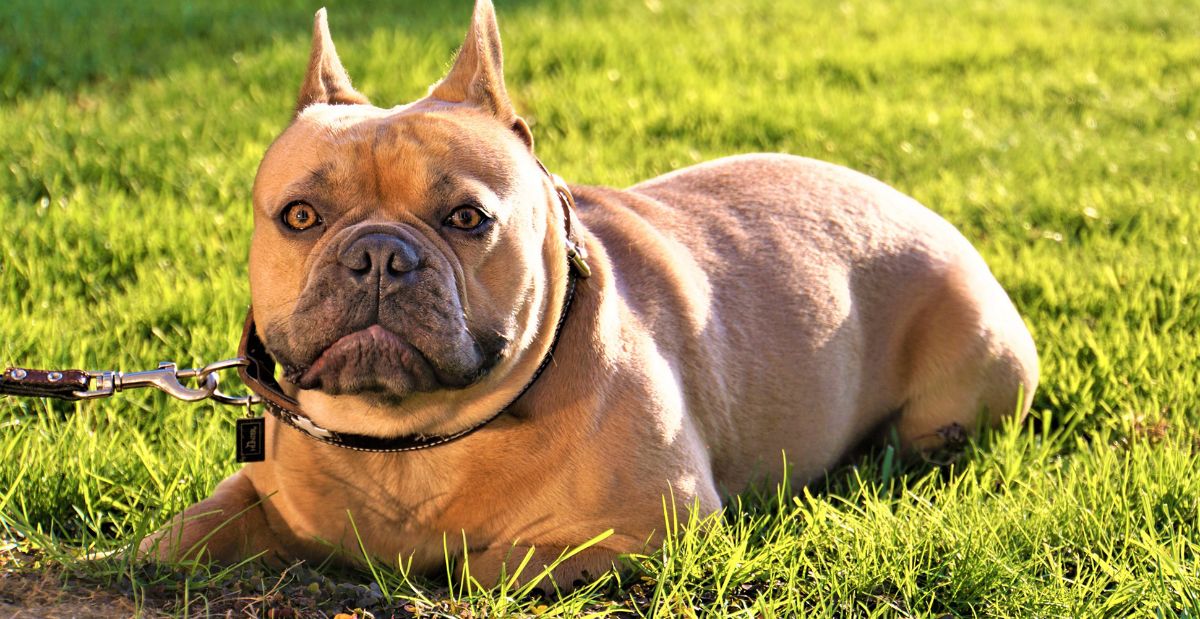 Best ForFamilies with children and/or pets

About The French Bulldog

The jovial French Bulldog, also commonly referred to as a “Frenchie,” bears a striking resemblance to the Bulldog though much smaller in size. One of the distinguishing features of the breed is its ears which are substantial and stand at attention at the base of the skull, giving the dog a bat-like appearance.

The Frenchie is a charming little fellow that easily worms its way into the hearts of everyone it meets. A dog breed that loves to snuggle, the Frenchie craves affection from those it knows and loves. French Bulldogs are considered to be an intelligent breed; however, they can be both independent and stubborn and often resist learning new things.

French Bulldogs are not exceptionally vocal dogs, and thus, do not bark often. They remain on high alert for sounds around the home, making them excellent at providing warning signals of potential intruders.

A breed with very low activity requirements, the Frenchie fits well into any home though daily exercise is recommended to maintain optimal health. The French Bulldog is also well-suited to living in a home with children and other pets. This dog type is very adaptable and adjusts beautifully to new situations.

Though the French Bulldog was once considered a rare dog breed, this beloved canine is now becoming an extremely sought-after family companion. Although, there are still some very rare varieties such as the Merle French Bulldog. Equally at home on the couch, on a lap, or out for a short walk, the French Bulldog places no great demands on its people.

To read about how Mini French Bulldogs compare to regular Frenchies, see here. 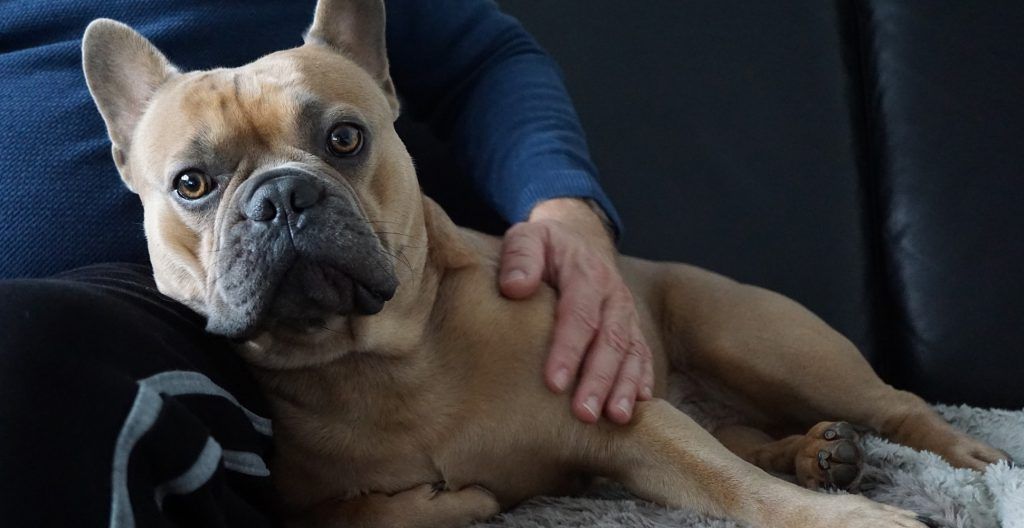 The French Bulldog’s original purpose was simply to be an affectionate family companion. This adorable dog breed traces its roots to England where early developers sought to create a smaller version of the larger Bulldog currently in vogue in the country. Over time, the French Bulldog moved from the stately homes of England to the luxurious estates of France, traveling there with its owners who sought employment as lacemakers in the region.

In France, the Frenchie received a new name, the Bouledogue Francais, and became immensely popular amongst residents in the countryside. To further refine the breed, French Bulldog aficionados in the region integrated several new breeds into this much-loved dog’s pedigree including Pugs and several types of terriers. Many assert that it is from these unusual inclusions that the Frenchie owes credit for its trademark bat ears.

Over time, word of this new breed reached the ears of the Parisian elite, and the Frenchie moved from the French countryside to the salons of the great city of light. Here, the French Bulldog enjoyed life as a pampered pooch, being toted to the finest cafes in the region and enjoying pride of place at the city’s most popular dance halls. Artwork by the renowned Edgar Degas and Toulouse-Lautrec bear evidence of the prominence of Frenchies in everyday life in France.

The late 19th century saw the breed introduced to the United States and further reaches of Europe. Though the French Bulldog originated in England, the people there were reluctant to accept this newer, smaller version of their beloved breed since the stately Bulldog was now synonymous with the country.

American breeders also contributed to the development of the breed in the 20th century. They were the first to declare the bat ear the hallmark of the breed as opposed to the rose ear which was also considered acceptable earlier in the breed’s history. 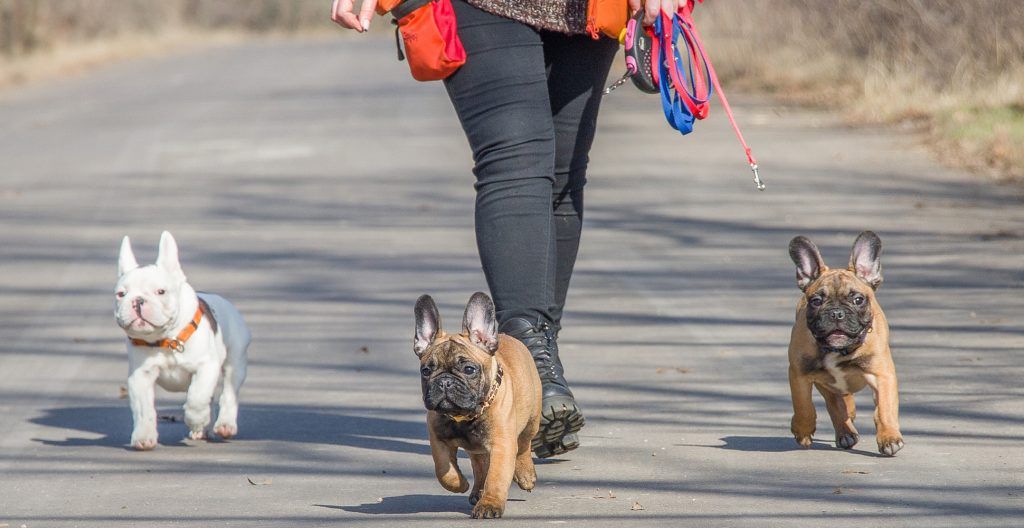 The average Frenchie reaches a height of 11”-13”, making it a relatively small dog. It is strongly emphasized that this dog breed’s weight should never exceed 28 lbs. Care must be taken to monitor the French Bulldog’s girth as weight gain can lead to serious health complications.

The French Bulldog is a breed that should appear balanced in appearance. Proportion is a very important part of its standard, and no one element of the dog should stand out above the rest. A key characteristic of the breed is the proportion measured from the shoulder to the ground in relation to the shoulder to the base of the tail. These should be nearly equal.

Since the Frenchie is a small dog, it is relatively easy to care for. Though the Frenchie is not prone to wandering or creating its own mischief, it is advised that all French Bulldog owners provide a safe, fenced space for the dog to enjoy to avoid any escape attempts. The French Bulldog is a natural comedian, bringing an easy smile to the lips of each member of the family. A dog breed that is quite intelligent, the Frenchie is independent of spirit and requires motivation to willingly comply with training attempts. It is recommended to encourage the dog’s participation in training opportunities that each session include praise, treats, and playtime.

The Frenchie is both affectionate and loving. This dog breed loves its people and is equally at ease meeting the public at large. The French Bulldog is gentle and loving with children and gets along well with other family pets. Children should be taught the appropriate way to handle the Frenchie to avoid injury to the dog.

Integrating a French Bulldog into a home with other pets is not a difficult chore. Since this breed naturally loves the company of other animals, families can simply take their pets to a neutral location like a park that receives little traffic from other animals. In a neutral space and on a one on one basis, the animals can be introduced safely.

Frenchies adapt well to any living conditions. They require very little space or exercise though they should be walked daily to maintain good health and proper body condition. However, the Frenchie is not a fan of being left alone and can become dramatic and mischievous when this occurs. The behavior is best combatted by ensuring the dog has something to occupy its mind and its jaws while the family is out.

Frenchies are dogs of moderation when it comes to weather conditions. They do not do well in cold or heat and can become very ill if allowed to be outdoors during this type of weather. 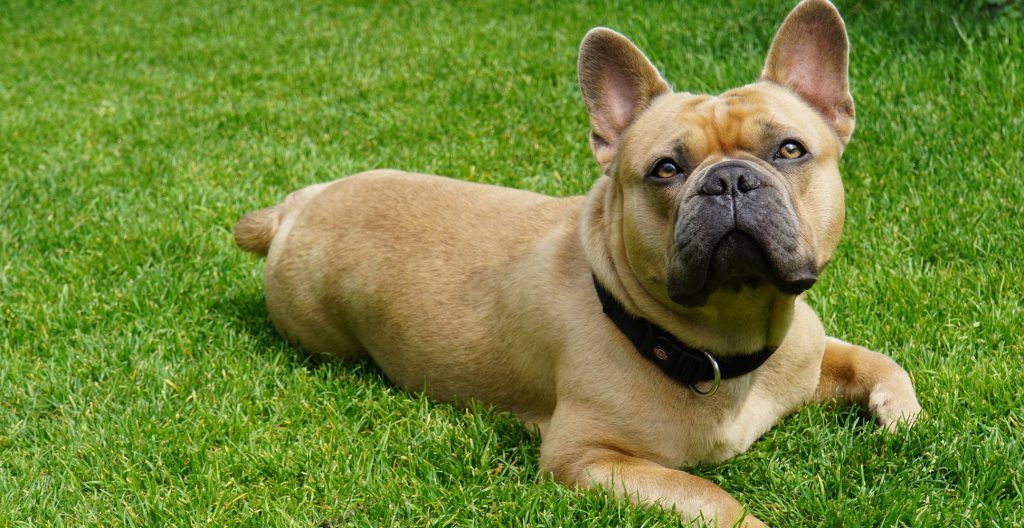 Unfortunately, the French Bulldog can fall prey to a number of serious health conditions. To ensure the best chance of excellent health, it is best to purchase a Frenchie from a breeder who stringently health tests for any potential genetic illnesses common to the breed.

Some of the most commonly seen health problems in French Bulldogs are hip dysplasia, brachycephalic syndrome, hemivertebrae, allergies and other skin conditions, luxating patellas, intervertebral disc disease, Von Willebrand’s disease, cleft palates, and elongated soft palates. Frenchies can be predisposed to breathing problems which is why they do not do well in hot or cold weather.

A dog breed with a coat comprised of short hair, the Frenchie sheds very little. To keep the French Bulldog well-groomed, all that is required is brushing once a week. However, the folds of skin on a Frenchie’s face can trap bacteria that can lead to infection if not kept scrupulously clean. These should be bathed and dried regularly.

Nail and dental care should be maintained on an as needed basis.

Weight gain is of serious concern in this breed. To prevent this from occurring, it is vital that all food be properly measured and adjustments made to attain and maintain a correct body condition.

The Frenchie does not drool excessively but does participate in this practice on occasion. 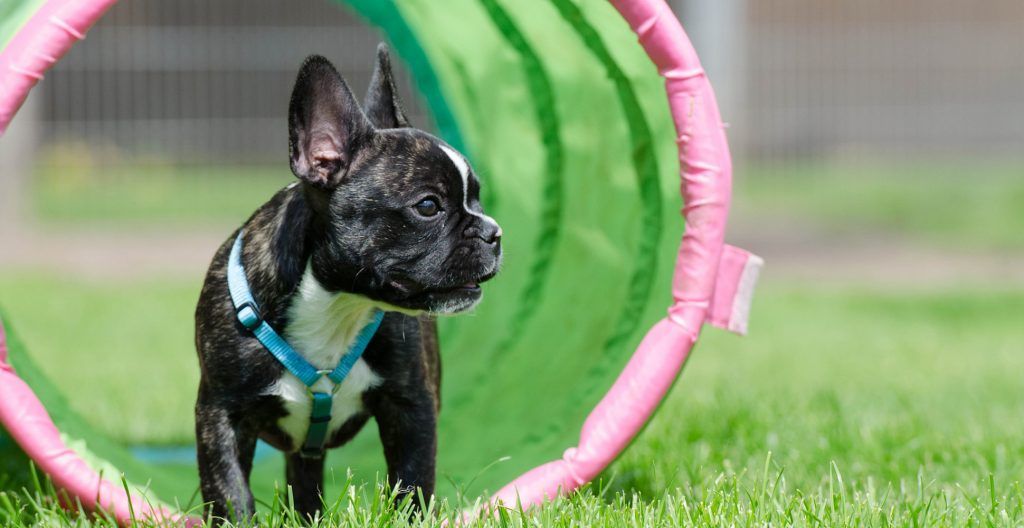 Proper socialization and obedience training are very important components of raising a French Builldog that is happy and well-adjusted. It is recommended that French Bulldog puppies attend puppy socialization classes to learn how to interact politely with other dogs. Once the dog has passed this course, it is a good idea to begin obedience training; either through a formal class or at home. Though the Frenchie can be stubborn and may resist training, the dog will be a far more willing participant if yummy treats, praise, and play are involved.

The Frenchie is an intelligent dog. With proper motivation, this dog type can learn the main obedience commands in the span of a six-week obedience training course. This may happen more quickly if practice occurs at home on a frequent basis.

When it comes to nipping and biting, Frenchies are no different than other breeds; they all begin life exploring the world with their mouths. Though this behavior may seem cute in a young dog, it will lose its appeal when the dog becomes an adult, so it is important to be resolute and not allow biting at any time.

To discourage biting, the best course of action is to teach the Frenchie that teeth have the potential to hurt by giving an enthusiastic “OUCH!” whenever the dog’s teeth connect with skin. Another effective technique is to distract the puppy by providing a bone or other toy. Biting most commonly occurs during teething. This gradually fades as the adult teeth come in.

Though Frenchies were once employed as ratters, they are not typically prone to chasing prey or wandering away from their families.

Frenchies are not a dog breed that are known for excessive barking. 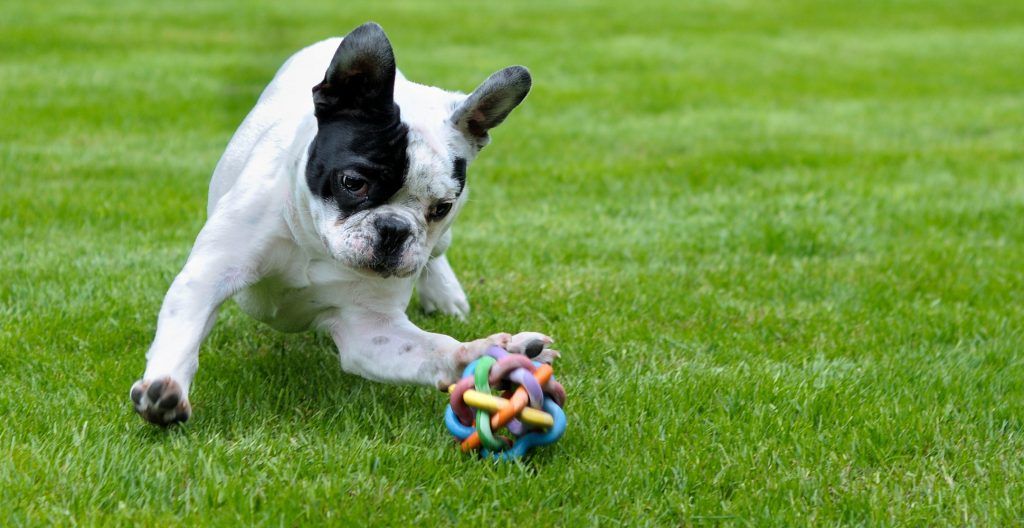 As a low activity breed, the French Bulldog is easily satisfied by a short walk of even 15 minutes in length or a rousing game of fetch in the yard. However, Frenchies do have the potential to excel at a number of dog performance sports including agility, Rally, and competitive obedience.

Because the Frenchie has a flat-face, the breed is prone to breathing difficulties. Because of this, strenuous activity should be avoided, particularly during bouts of hot weather.

The French Bulldog is extremely playful and enjoys time spent having fun with its family. 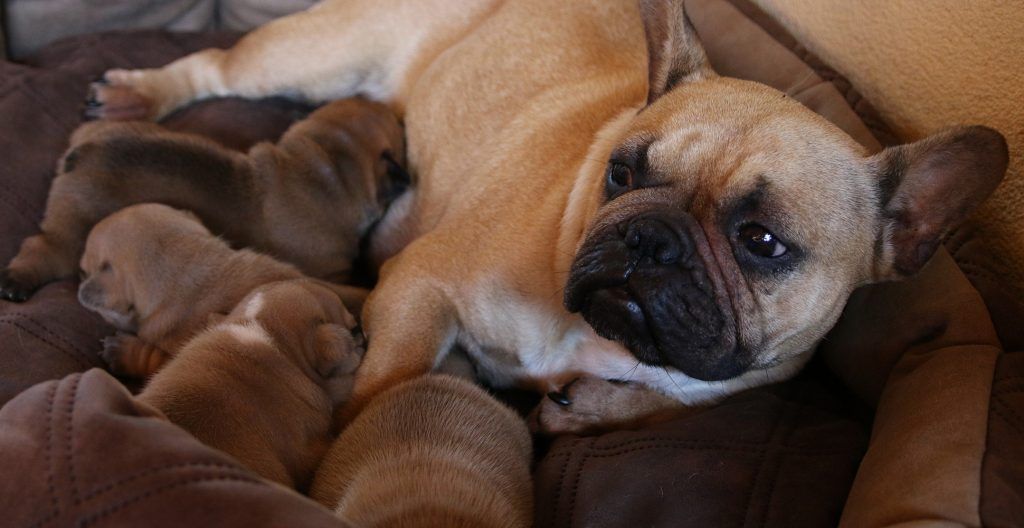 To ensure a happy, healthy French Bulldog, it is important for each owner to consult with their veterinarian to select a food that is the most appropriate for the dog’s age and activity level. A high-quality dog food comprised of lean proteins is a good starting point. However, age must be taken into consideration as well. Dog foods too rich in calcium and protein can cause rapid bone growth, leading to later structural problems for puppies.

Puppies should be fed a puppy food that has been specifically formulated for the needs of their growing bodies. The bag will give guidelines as to meal size based on the weight and age of the puppy. These are just basic recommendations and should not be taken as the gospel. Adjustments should be made based on the hunger level of the puppy and the pup’s body condition.

Likewise, adult dogs should be fed a high-quality diet that has been designed to meet their needs. Portion sizes are also outlined on the bag of selected food. Dogs that are very active will likely need more than the basic recommended amount. The food can be increased or decreased until the right amount has been determined. 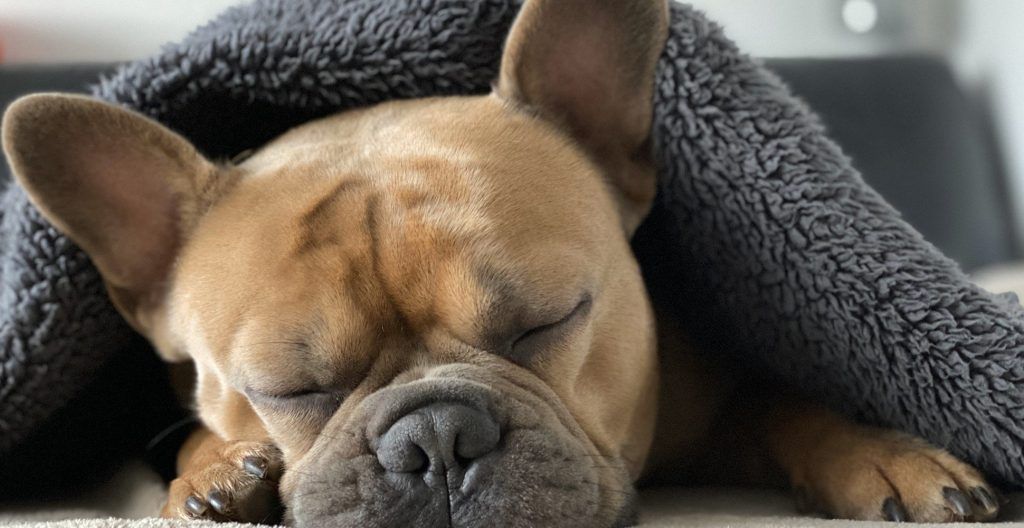 For those seeking to adopt a French Bulldog, there are many reputable organizations located throughout the country.

Here are several to consider: