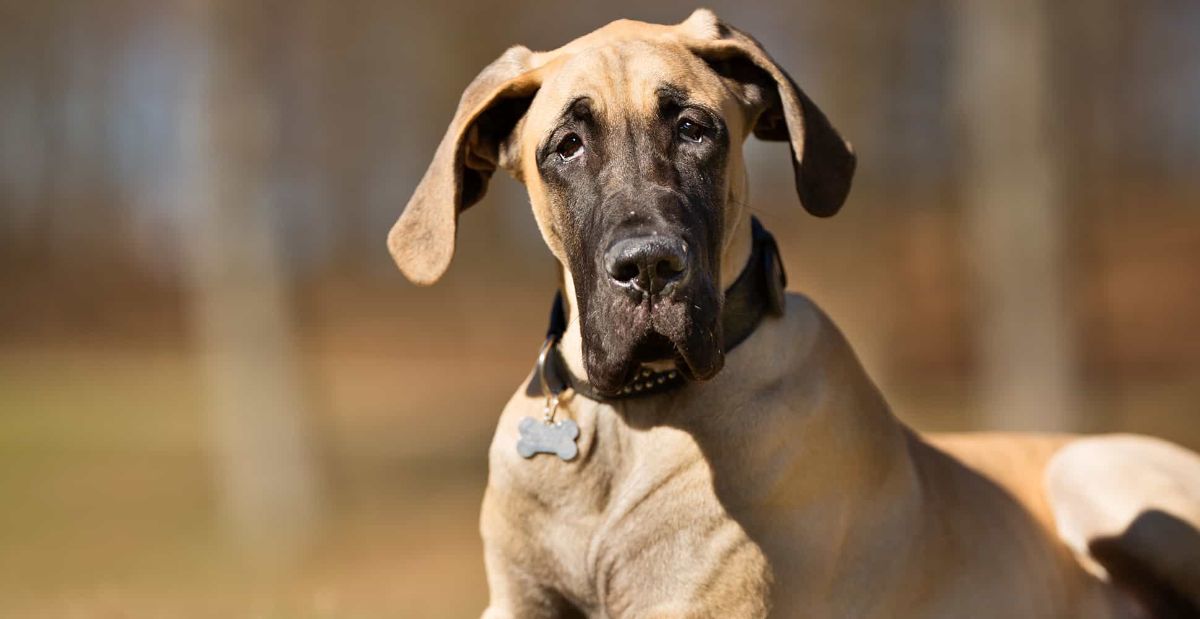 About The Great Dane 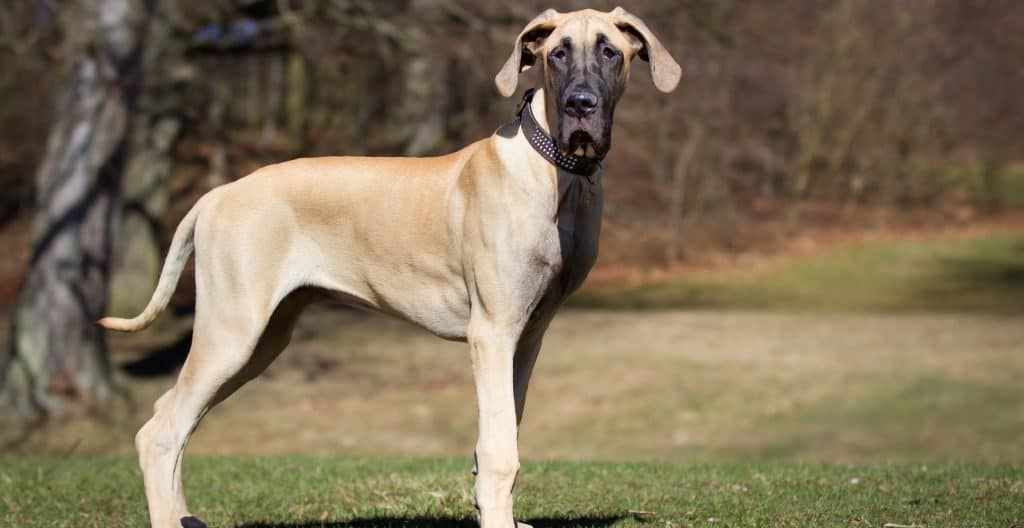 The Great Dane’s original purpose was assisting its owners on hunts for wild boar. However, the hunting prowess of this dog is much diminished today since years of careful breeding have resulted in a pooch of a gentle nature that is the friend of all.  Still, in spite of the Great Dane’s tenderness towards people and other animals, its sheer size and the strength of its bark alone are enough to provide an intimidation factor.

A breed whose descendants were Mastiffs, the Great Dane of today is more refined in type than the dogs that make up its pedigree. The Great Dane possesses a regal air and carries itself with grace and dignity. Its body is well-muscled, enabling it to excel at any athletic pursuit it undertakes. Though traditionally the breed’s ears were cropped, they are now often left in their natural state.

The long tail of the Great Dane can act like whip, causing pain to those it hits when it is wagged with enthusiasm. This same tail also bears the ability to wipe items off of end tables and chairs, meaning precious items should be relegated to higher ground for their safety. The Great Dane possesses a love of food, and its height makes it ideally suited to scoring snacks directly from kitchen countertops.

In character, the beloved Great Dane is loving and kind. A breed that is known as a gentle giant, the Great Dane is affectionate to all it meets, whether a cherished family member, a stranger, or a new canine pal. True to its origins, the Great Dane remains extremely brave and will willingly protect those it loves if called upon to do so. The Great Dane is not known to be a vocal dog though its bark is sharp and difficult to ignore.

The Great Dane is a dog that enjoys the company of people and seeks to be with its family as often as is possible. For this reason, the breed is not well-suited to spending a lot of time on its own.

A breed with high energy, the Great Dane has surprisingly low activity requirements. Sadly, the Great Dane is considered a heartbreak breed due to its predisposition to disease and its relatively short lifespan.

Because of its immense size and power, the Great Dane is not recommended for first-time dog owners. The breed is also not well-suited to life in an apartment.

One of the oldest dog breeds, images of Great Dane-like dogs exist on ancient Egyptian artifacts which can be traced as far back as 3000 B.C. Archaeological evidence exists pinpointing dogs similar in appearance in Tibet as well. It is believed that the Great Dane travelled to various areas of the world with the Assyrians who made judicious trades of the breed with the Greeks and Romans.

The Greeks and Romans are credited with the development of the breed by introducing different bloodlines and dog types into the pedigrees. Among the dog breeds believed to have played a part in the Great Dane’s heritage include the English Mastiff, the Irish Wolfhound, and the Irish Greyhound.

The Great Dane, which in earlier days was known by the handle Boar Hound, was originally named for the work that it was designed to do: hunt boar. At the time, the breed’s ears were cropped to prevent tears in the leather from the tusks of boars while out on a hunt. In the 17th century, the name “English Dogges” was applied to this noble breed.

As the century drew to a close, German aristocrats began to keep this cherished breed in their homes as beloved family pets. These German nobles renamed the breed Kammerhunde, a term that translates to “chamber dogs.” In their new role as pampered family companions, the Great Dane was known to sport lavish velvet collars as an adornment to their natural elegance.

In the 18th century, a French naturalist travelled to Denmark and caught sight of a Boar Hound that more closely resembled a Greyhound. Mistaking the dog for Danish origins, he bestowed the title of Grand Danois (Great Dane) upon the dog. Though Denmark bears no role in the development of the breed, this name has been the one that gained favour and remained.

Breed refinements continued in Germany throughout the 19th century. Their goal was to change the Great Dane’s temperament from the personality of a fierce hunter to the gentle family companion we know and love today. 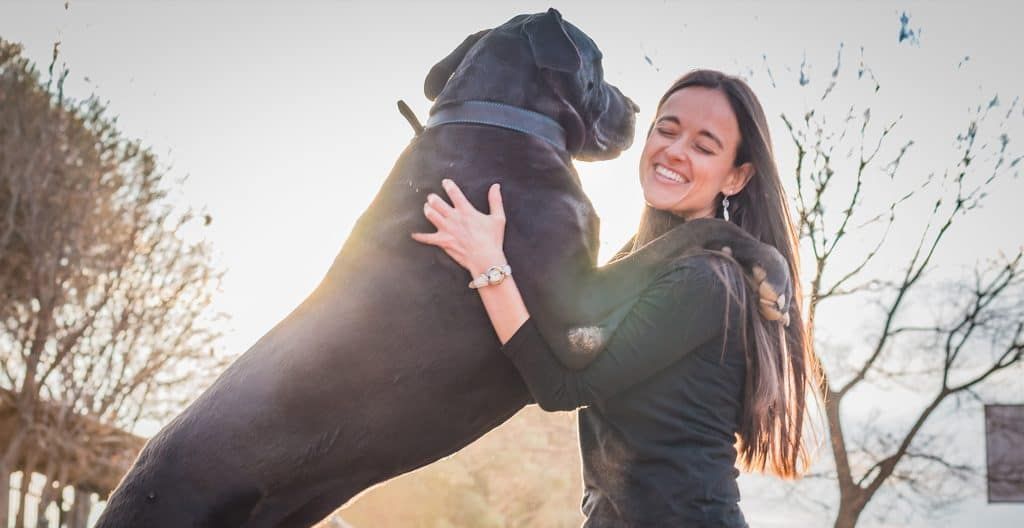 The Great Dane is considered a giant breed, and families must be prepared for the added costs associated with owning a breed of this size. Though the Great Dane does not have an appetite to match its stature and girth, this dog breed still requires substantial amounts of a high-quality food. Though these types of dog food are more expensive, dogs typically need to eat less of it to feel satisfied, thus increasing its value.

In addition to this, any necessary items for a dog of this size are more expensive since they need to be much larger including medications, dog beds, collars, and crates. 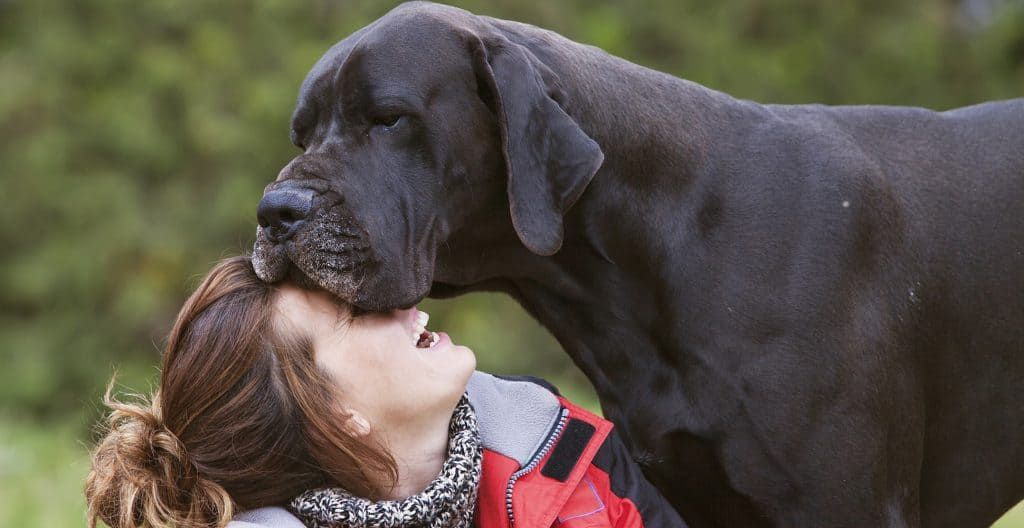 One of the hallmarks of a Great Dane is its sweet, gentle nature. The breed is known for its exceptional patience.  A dog that is kind and loving with children, the Great Dane is an affectionate family companion that craves social time with its family.

A breed that takes great pleasure in pleasing its people, the Great Dane is a willing partner in training exercises, learning new skills with relative ease. Great Danes excel at many different activities including competitive obedience, tracking, and even agility. Natural born athletes, this dog type possesses both grace and elegance but has surprisingly low activity requirements given its size.

The Great Dane is a highly social breed. A dog that truly loves people, the Great Dane has never met a stranger; each person the dog encounters instantly becomes a cherished friend. To help encourage this natural drive, early socialization is recommended.

Great Danes enjoy the company of other dogs but on occasion can find it difficult to get along with its siblings. For families with other established pets in their home, it is best to bring a Great Dane puppy into the home as opposed to an adult with already established preferences and habits. To ensure a happy home, all introductions should be done in a neutral setting.

A giant breed, the Great Dane needs room to move, making this dog poorly suited to life in an apartment. The breed does not enjoy time spent alone and can become destructive if not kept productively engaged in its owner’s absence.

The Dane’s coat provides sufficient protection to endure most weather conditions. However, this dog breed needs to be indoors with its family to truly be content. 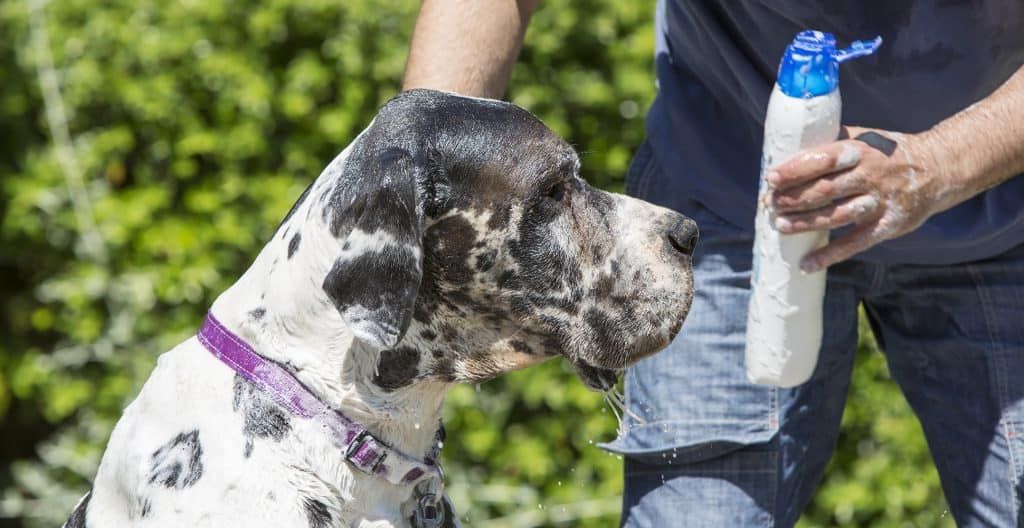 Though Great Danes typically enjoy relatively good health, they are considered a heartbreak breed due to their short lifespan. To ensure the health of a Great Dane, puppies should be purchased from breeders who have stringently health tested their breeding stock to prevent the spread of genetic disease to future generations. Among the health problems which can plague Great Danes are growth issues, hip dysplasia, gastric torsion, bone cancer, heart disease, and bloat.

Though the Great Dane has low grooming requirements, it is a breed that sheds a lot. To help reduce the amount of hair shed into the home environment, this dog breed’s coat should be brushed daily. Bathing is on an as needed basis to keep the coat and skin in good condition.

Nails should be trimmed at least once a month. Regular dental care and ear cleaning are also required to maintain optimal health.

The Great Dane is not particularly prone to weight gain; however, it is still recommended that all meals and treats be carefully measured and monitored. 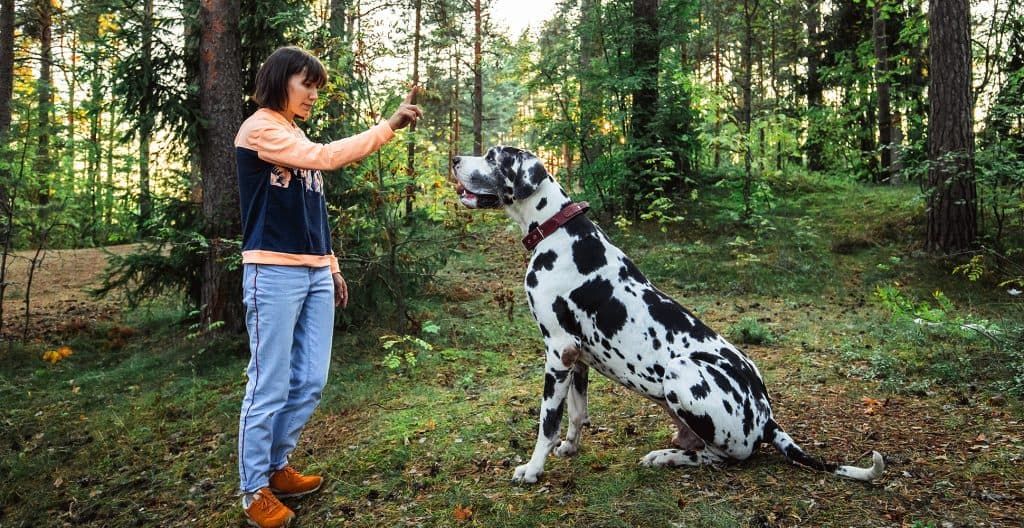 Due to the size of the Great Dane, puppy socialization and obedience training should be considered necessary. A highly intelligent breed, the Dane loves to learn and welcomes training opportunities with great enthusiasm. A working breed, the Great Dane should easily master the basic obedience commands in as little as a few weeks, assuming regular practice occurs.

The Great Dane was originally a hunting breed, and thus, does possess a prey drive and will roam if given opportunity to. Secure containment is an absolute must with this breed. Keeping a Great Dane contained can be a challenge. A minimum height of six feet is recommended for fencing.

The Great Dane will nip in play. Since the Great Dane is a giant breed dog, allowing it to bite, even in play, could lead to disaster. This behaviour should be curbed by redirecting the dog’s attention to a toy or bone. 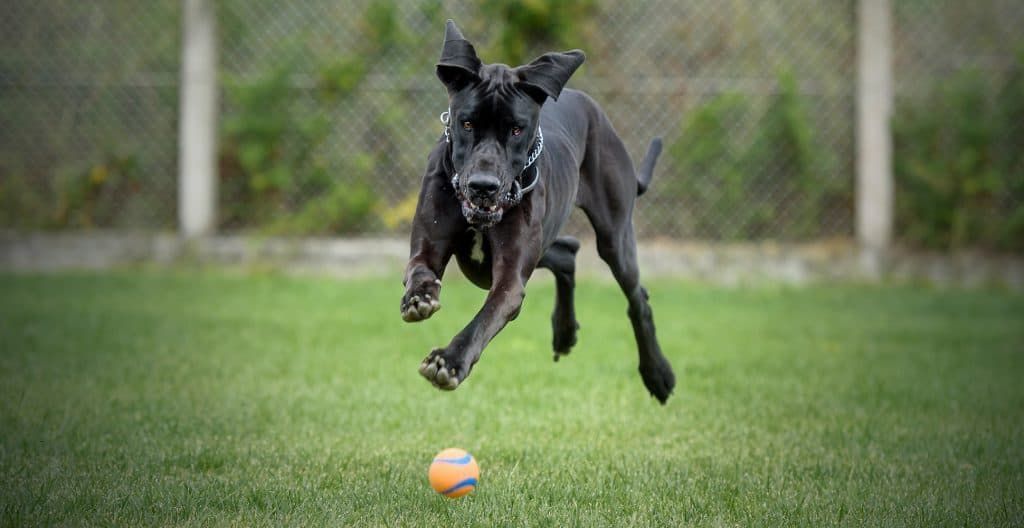 The Great Dane is a breed with lots of energy to expend. However, its activity requirements are low given the dog’s size. A moderately paced walk of between 30 to 60 minutes each day is sufficient to keep this breed content. It is important to note that in cold weather the Great Dane may catch a chill, so it is a good idea to dress the dog in a sweater or coat.

The Great Dane is a dog that needs exercise to be appropriate to its age. For those who have selected a Great Dane as a running partner, doctors recommend waiting until the dog is 18 months of age to prevent permanent injury to the dog’s structure. Regardless of age, all activity should be done well in advance of or well after mealtimes to help prevent bloat.

The Great Dane is a very playful dog that enjoys spending time doing fun things with its family as often as possible. 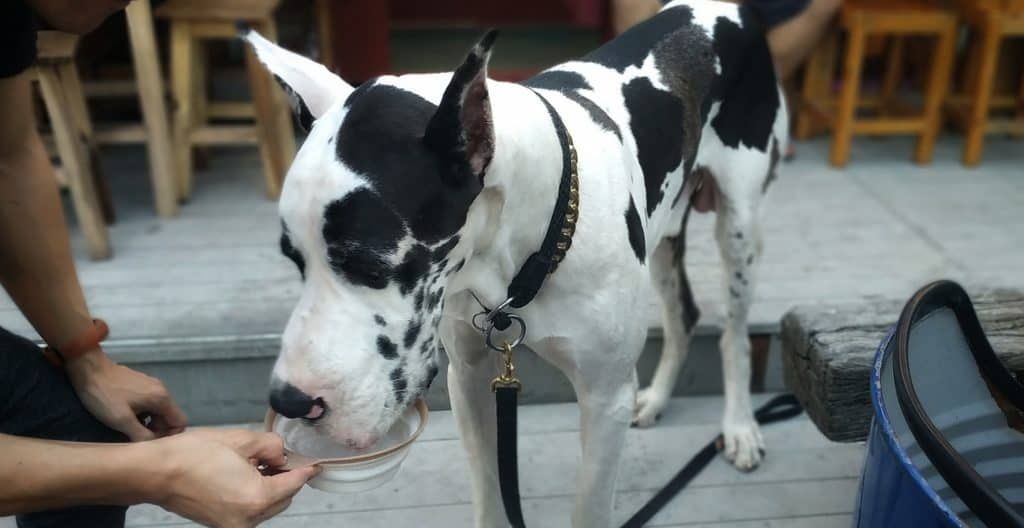 The Great Dane is a breed that has unique nutritional requirements, so it is best to consult the advice of a veterinarian to help select the right food. As a basic rule of thumb, all Danes should be fed a high-quality, nutritious diet that is appropriate to the dog’s age and health condition.

Since the leading cause of death in Great Danes is bloat, when the food is given to the dog is as important as what kind of food is given. Though it is not known what causes bloat, it is wise to avoid exercise just before or just after a meal as a precaution.

Giant breed puppies like Great Danes must be fed a puppy food that has been formulated specifically to address the needs of large breed puppies. Regular puppy food should be avoided. Adult Great Danes should eat an adult formulation designed with their age, activity level, and size in mind.

Meal sizes should be judged according to the label on the dog food packaging. This is only a guideline and should be adjusted to meet activity level. The dog’s weight and appetite can serve as excellent guides.

For more information about Great Danes for adoption in your area, we recommend this excellent, comprehensive resource: