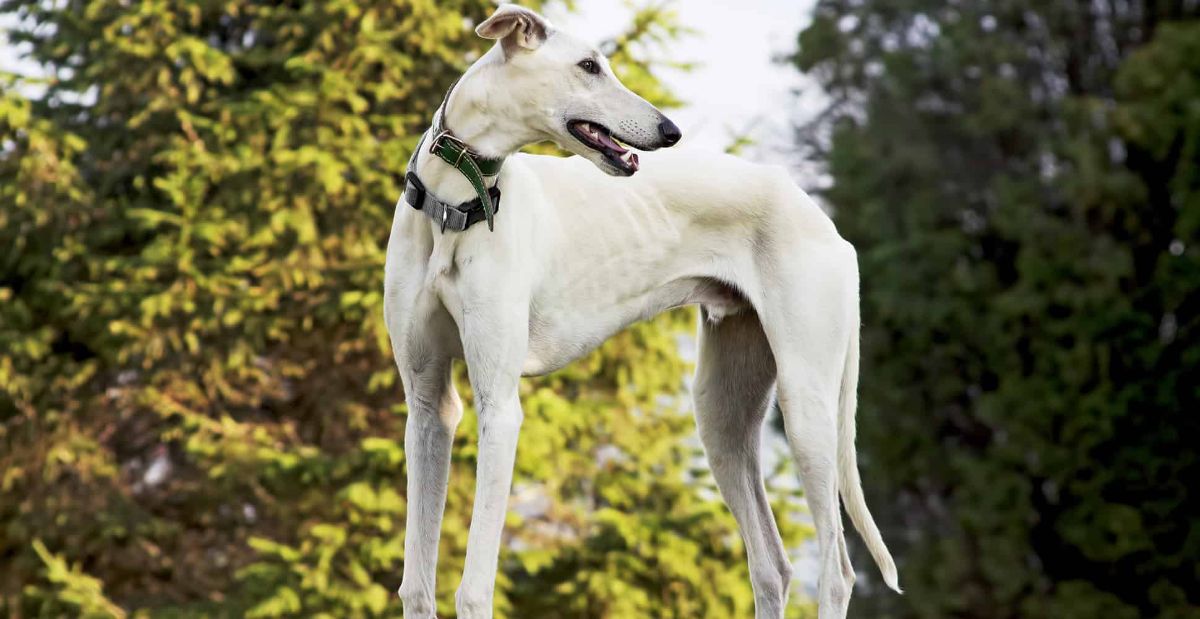 A tall and sleek breed, the Greyhound is classified as a sighthound as their hunting style is driven by sight rather than scent. Their amazing ability to run at over 35 miles per hour comes from their athletic structure, musculature, and also their ability to give their complete focus on the chase.

Greyhounds enjoy the company of other dogs, but they’re not overly fussy with people. So, while they enjoy being with their families, they’re not the type of breed who will feel the need to follow you around the home. This does mean that they can adjust to living in a home where they are left by themselves for short periods of time.

A comfort seeker, the Greyhound will love the opportunity to stretch out on the sofa. If you’re very house proud, this might not be the right breed for you. It’s been suggested that the Greyhound dates back over 4,000 years and to the kingdoms of Egypt, Greece, and Persia. They’re even mentioned in some of the oldest texts, including the Bible. Revered by royalty, they can be seen in depictions of royal courts, and mummified Greyhounds were even found in ancient tombs in Egypt.

Fast-forwarding to the middle ages in the UK, the Greyhound endeared themselves so much to royalty with their fantastic hunting skills that it became a capital offense to kill a greyhound. It wasn’t long before commoners were forbidden from owning them, and permission was needed from the king to be able to own or breed a greyhound.

By the late 1800s, the Midwest of the US was experiencing problems with a vast population of jackrabbits who were eating farmers’ crops. The solution? The Greyhound. Imported from the UK, the Greyhound proved their hunting ability by clearing vast areas of land of the pest. This, in turn, led to the popularity of coursing events and, finally, to the business of greyhound racing.

One of the first breeds to be shown in the US, the Greyhound, was recognized by the American Kennel Club in 1885. Then in 1907, the Greyhound Club of America was formed.

This is a large breed with males standing between 28-30 inches at the shoulder and females only slightly smaller at between 27-28 inches. Their weight ranges between 65-70 pounds for males and 60-65 pounds for females.

Dogs bred for racing tend to be at the lower end of the height range and those for showing towards the upper end.

Care is needed that Greyhound pups grow steadily to their adult size and over-supplementation of their diet, and excessive exercise should be avoided. 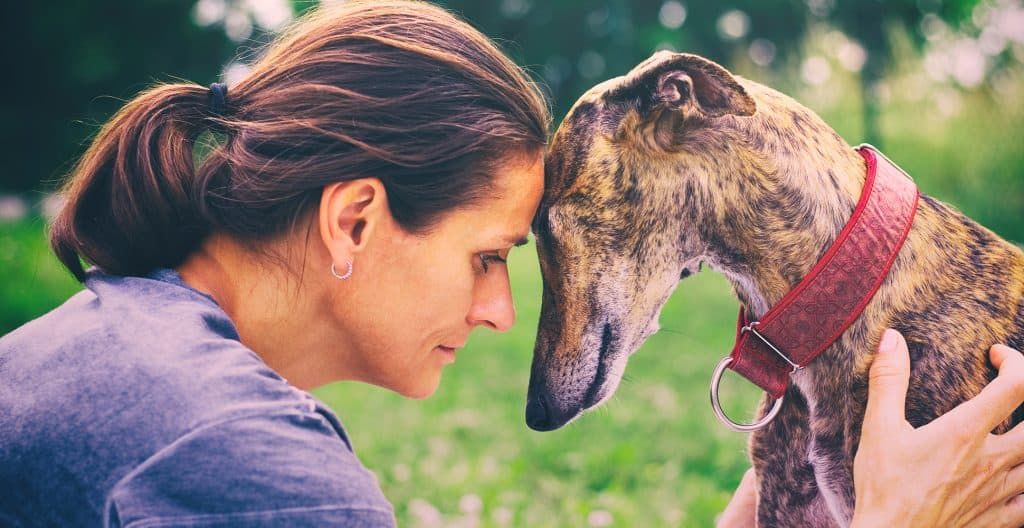 Greyhounds have a very even temperament with people. It’s very unusual to come across one who is timid or aggressive. When this does happen, it’s generally because of a bad experience or insensitive handling.

Because of their unique hunting ability and their useful purpose, they have historically been well cared for. Selective breeding for quiet dogs that are gentle around people was core to their popularity. This is an independent breed that is friendly if approached. However, don’t be surprised if they show no inclination to rush up to strangers to say hello.

Greyhounds have just a single coat and very little body fat to protect them from any unintentionally rough handling from small children. They do tend to be sensitive to this type of pain and so may react quickly. Careful supervision is needed when Greyhounds and toddlers are near each other.

With their thin single coat, the Greyhound does not adapt well to the cold. They will need a warm jacket in cold weather or wet conditions.

Greyhounds can adjust to being left alone while you’re at work. However, this needs to be worked on steadily, and you may need to hire a dog walker to ensure that your hound has the opportunity to use the garden during the day. 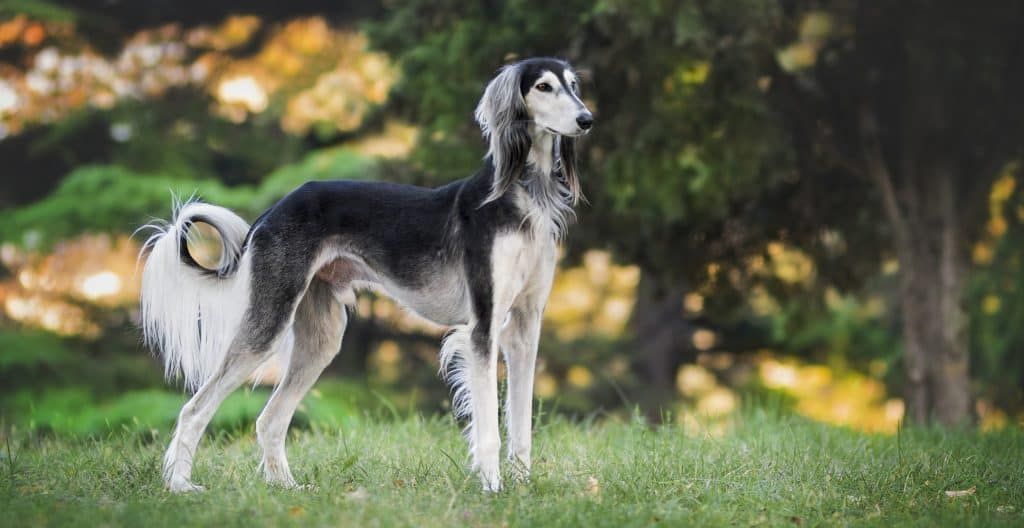 Overall, Greyhounds are a very healthy breed. To ensure their ongoing health, good breeders carry out the following testing of their dogs –

This is a breed that requires very little grooming. A weekly brush to remove dead hair and dirt is all that’s needed. Many Greyhounds have nails which seem to grow much faster and stronger than in other breeds. So, they need to be checked regularly to prevent overgrown nails from causing discomfort. The Greyhound is probably not the first choice of breed if you’re hoping to achieve precision obedience. However, they are very capable of learning basic commands and can even go on to take part in performance sports.

The Greyhound can be a sensitive breed, and punishment is likely to damage the relationship between you and your dog. Reward-based training using food or toys will give much better results.

It does have to be remembered that Greyhounds are members of the hound group and so there some prey drive is to be expected. However, each dog is different, and its potential for a strong desire to chase will come from several different factors. These can include a combination of genetics and how often they have successfully hunted in the past.

Managing the environment is also essential in reducing hunting. Only allowing your Greyhound to be leash-free in securely fenced areas and not letting them run with unknown small dogs will all help to keep everyone safe.

Generally, Greyhounds are not a breed that barks very often. If your hound does begin barking more, then it might be a symptom of a deeper behavioral problem. A certified behaviorist will help you to work out what the problem might be and how to resolve it. Despite their reputation for being athletes, the Greyhound is often a bit of a couch potato! Two thirty-minute walks per day with the chance for some free running will then see them spending the rest of the day sound asleep. They will, of course, welcome longer walks at the weekend, and new areas full of exciting smells will be appreciated.

Although there are always exceptions, adult Greyhounds tend not to be overly playful. However, finding the right toy can be the key to bringing out hidden playfulness. Consider furry, squeaky toys or those which can be dragged and thrown around to stimulate those chase instincts. 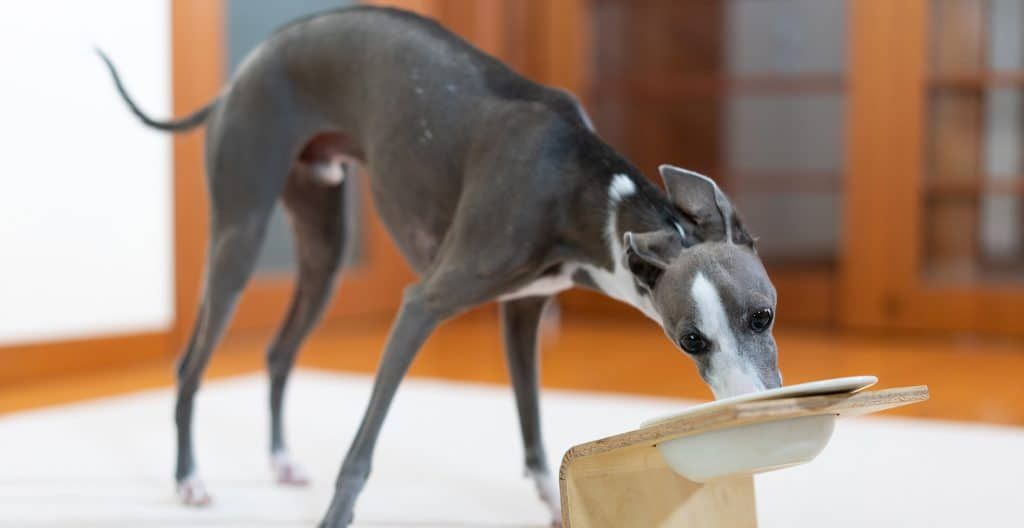 For advice on your dog’s individual nutritional needs, do speak to your veterinarian or pet nutritionist. When you’re then in the pet store deciding which food to choose, consider your dog’s age, their life stage, and their activity levels.

As a large, deep-chested dog, greyhounds can be susceptible to bloat. This is when the stomach becomes full of food, gas, or water and becomes distended. The pressure increases, and this then puts pressure on internal organs. This can be a fatal condition if not identified and treated quickly.

Although the exact reason for bloat happening isn’t yet clear, feeding small meals twice a day may help. Placing the food in a puzzle toy to slow down the speed with which your Greyhound eats may also reduce the risk of bloat. 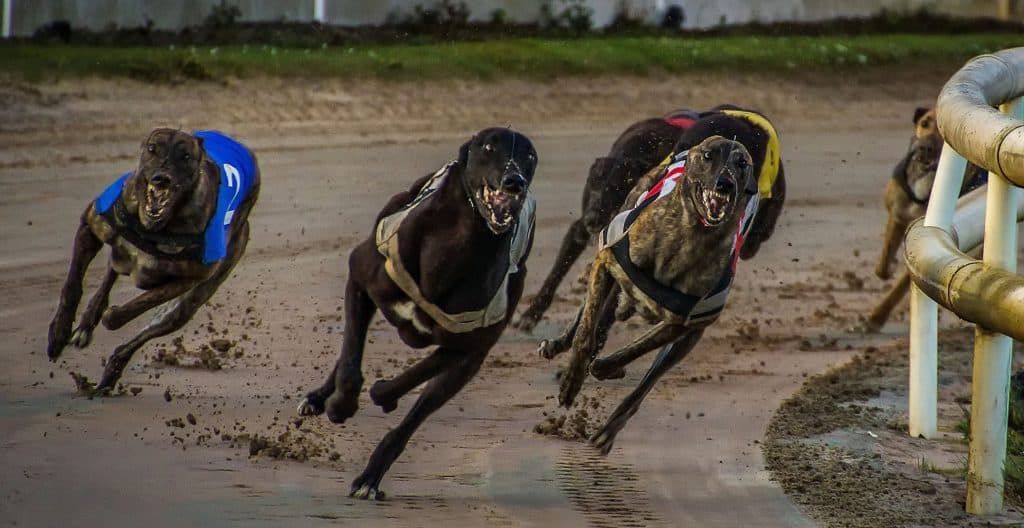 Due to their short-lived careers in racing, there are sadly high numbers of greyhounds across the US who need new homes. Many dogs adjust from racing to family life very quickly but do check to see what support the rescue will provide before adopting. For further information on adopting a Greyhound, take a look at the websites of the following organizations:

Further information on the Greyhound can be found on the website of the breed club, the Greyhound Club of America – https://www.greyhoundclubofamericainc.org/.