If you’ve just fed your puppy for the first time, you might be wondering how long after a puppy eats do they poop? Whilst this is a simple question, the answer is a little harder to work out, because puppy digestion times can vary because of different factors.

However, it’s worth remembering that eating stimulates gut movement called peristalsis. This movement is what pushes food through your dog’s gut. If there’s food already in there from a previous meal – which there should be! – eating will often stimulate your pup to poop. This often happens within half an hour of eating, and is one of the reasons why it’s a good idea to take your dog out to the toilet straight away after they’ve eaten, especially if they’re still being toilet trained!

How long does it take a puppy to digest food?

When a puppy swallows his food, it has to move from the mouth and throat, through the gullet (esophagus) and on to the stomach. There, it is mixed with stomach acid and sits for some time, emptying around 4-6 hours later.

Once it leaves the stomach, the food enters the small intestine, where digestion is completed and absorption of nutrients starts. Then, the large intestine – this area allows the body to complete absorption of key nutrients, including water. However, some things will still be digested here – especially fiber, which is digested by bacteria living in the large intestine. Finally, the food enters the rectum, where it is stored until your dog visits the toilet.

In total, the full process, known as ‘transit time’, may take around 13–57 hours in an adult dog, although vets and scientists disagree exactly how long is ‘normal’. Puppies are thought to have a shorter transit time, as their gut is so much smaller.

1. Age of your puppy

When your puppy is young and small, he will have a smaller gut and will usually have a faster gut transit time. In addition, he will likely be eating different foods when he is very young compared to when he is older – and these differences can change how long it takes food to move through a puppy’s gut.

The amount of food in the stomach can change gastric emptying time (and therefore time taken to digest a meal) considerably. A large meal usually slows down gastric emptying.

Stress can affect how long the stomach takes to empty, as well as change the overall gut transit time. Whilst some studies suggest that stress slows down stomach emptying time, stress can also cause diarrhea in puppies due to increased peristalsis, which speeds up transit time. 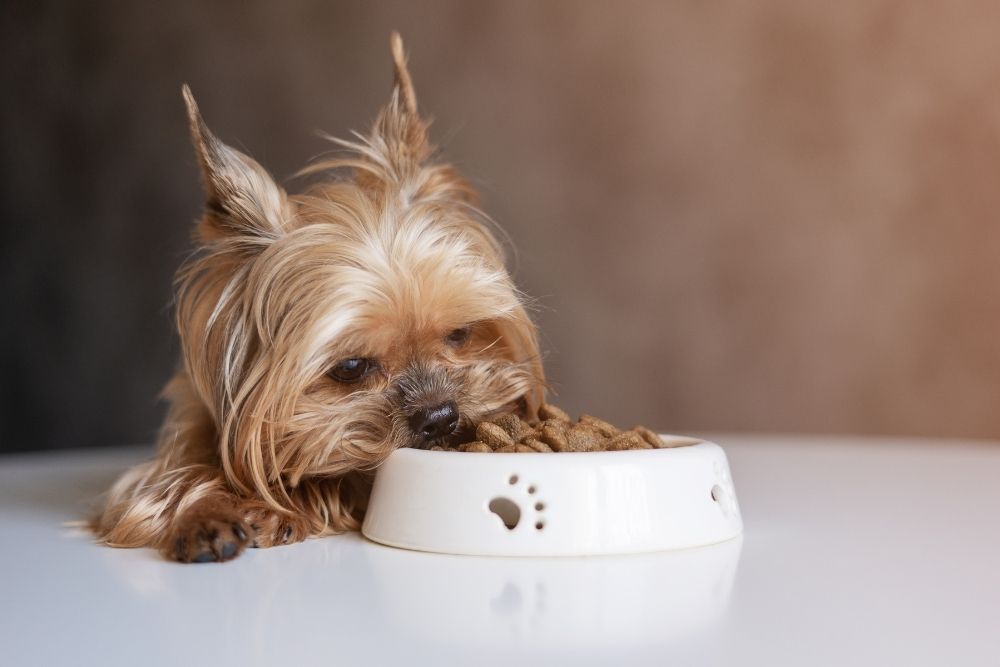 There are breed variations in the time taken for a puppy to digest food, but this tends to be due to size differences between breeds. The heavier and taller the breed, the longer it takes for a dog to digest his food. This is probably because larger breeds have longer guts. In fact, the length of an adult dog’s gut is about six times his height.

There’s also some evidence that infections like parvovirus and parasites like roundworms can slow down the time taken for the stomach to empty, and therefore slow down digestion. Some drugs and diseases can also impact how long it takes a puppy to digest his food. Foreign bodies, such as swallowed toys, can also block the pylorus (the ‘drain’ of the stomach) and prevent food from moving through properly. Exercise also increases peristalsis, and therefore causes food to move through the gut more quickly.

You can feed your puppy on wet or dry food – it’s entirely up to you. When they’re very young, and just weaning, most puppies will start on wet food. If they later move to dry food, you may want to add a little water to moisten their kibble – this helps to release smells and makes it easier for those needle teeth to chew.

When it comes to digestion, it doesn’t massively matter which you use. Wet food tends to move more quickly through the digestive tract than dry food, but both have been developed for optimum digestion. However, if your pup has digestive issues, you might want to consider a specially-formulated sensitivity diet – your vet will be able to recommend one that’s still safe for growing puppies.

Remember, you can’t look at the fiber and protein content on the back of a tin of wet or dry food and compare them – they can’t be compared as the moisture content differs so much. Instead, you should convert the guaranteed analysis to a dry matter basis before you try to compare them. 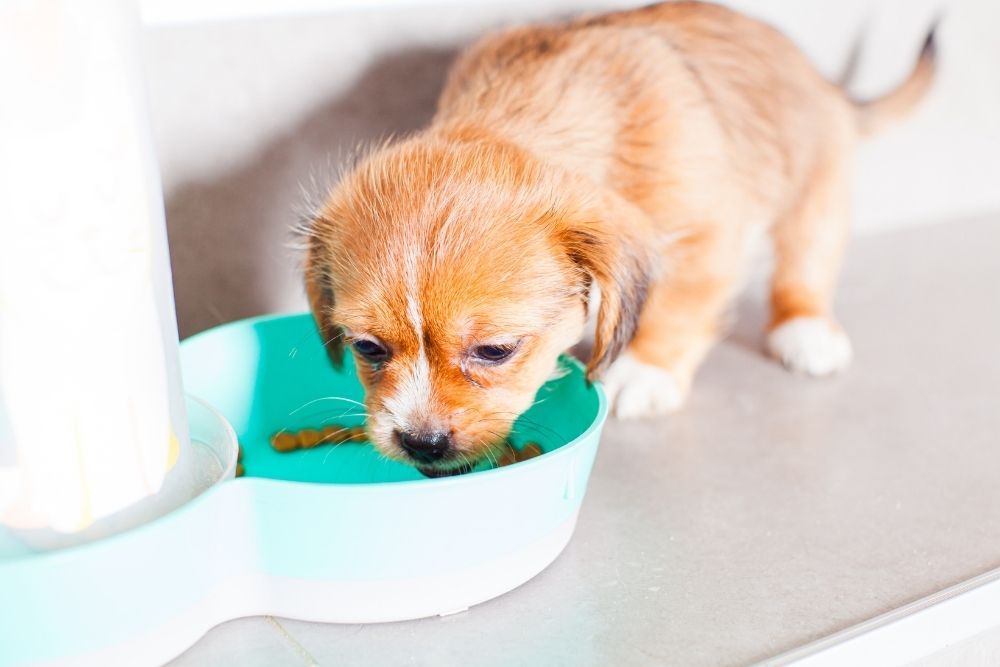 The importance of hydrating your puppy

Water is the ‘forgotten nutrient’, often ignored when we talk about carbs, protein, and fat. But it’s essential that your puppy gets enough water, and this is one of the reasons that people like to feed wet food to their dogs.

Water not only helps the gut function correctly, but it’s essential for most processes in the body. And regular water intake becomes even more important in puppies, who don’t have large areas to store spares.

Foods your puppy should be eating

Your puppy should be on a complete and balanced diet formulated to AAFCO or FEDIAF requirements. The diet should be formulated for ‘growth’ or ‘suitable for all life stages’. This ensures that they have all the nutrients they need to grow safely.

Whether this diet consists of wet food, dry food, or a mixture of both is up to you. It’s not recommended to feed your puppy raw food or a homemade diet as this growth period is critical. Even minor changes in a recipe – like substituting pig’s liver for lamb’s liver – can have dramatic and dangerous effects on their growth.

There has been a recent surge of cases of puppies with severe nutrient deficiencies caused by poorly formulated diets, both homecooked and raw. 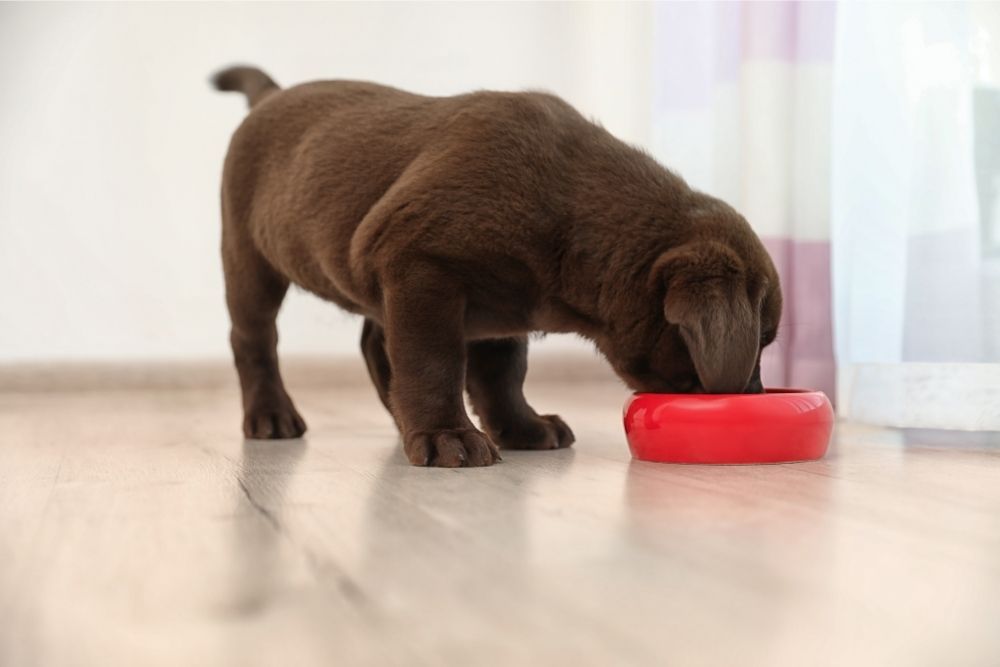 Diarrhea in puppies is common. It can be caused by parasites such as roundworm, stress, dietary changes, viruses and bacteria, dietary sensitivity, or a number of other conditions. It can be messy and frustrating if your puppy isn’t toilet trained.

When a puppy has diarrhea, all bets are off. Their toilet routine is likely to change drastically, so you’ll need to adapt your routine to suit them. This usually means letting them out more frequently and being prepared to take them out at the slightest sign of discomfort in order not to undo all your hard work in toilet training.

Puppies with diarrhea can quickly become dehydrated – this means it’s even more important to keep them hydrated. Don’t switch their diet to wet food if they’re on dry, as the sudden change in diet will likely make things worse, but do add water to their dry food, and encourage them to drink more using water additives or oral rehydration products.

However, it’s important to recognize that diarrhea in young puppies can quickly become fatal. Whilst loose stools at a normal frequency aren’t an emergency, there are some situations that should have you rushing to the vet’s office:

Eating stimulates movement of the guts called peristalsis, which means most puppies will produce a poop not long after eating. Make sure you take them out as soon as they’ve finished their food to help with their toilet training!

As for how long after a puppy eats they poop their food – that’s a harder question to answer. Total transit time from mouth to bottom may take 13 hours in an adult dog, and less in a puppy. Don’t worry too much about your puppy’s transit time – it’s more important to make sure they’re on a complete and balanced puppy diet that suits them. 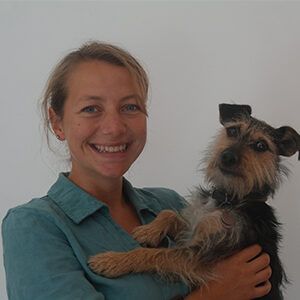 Dr Jo graduated from the University of Nottingham and went straight into small animal practice. She soon developed a love of consulting and helping pet owners to understand their pets. Jo now works part-time as a relief vet in the Channel Island of Guernsey, dedicating the rest of her time to writing articles and blogs. She’s got one small mixed-breed terrier, called Pixie, who is always getting into trouble!