Breeding dogs can be a tricky business. Just as with people, getting pregnant is not an exact science, but there are some things you can do to help improve the chances. Unlike female dogs, male dogs can breed all year round, but it is important that we don’t take advantage of this. Let’s explore further how many times your male dog can mate and some other things that may affect his performance.

How frequently can a male dog mate in a day?

Technically there is no limit to how many times a male dog can mate in one day, it will all depend on his stamina! But just because a male dog can mate multiple times it doesn’t mean he should. The amount of sperm contained in each ejaculation will decrease, leading to a lower chance of pregnancy. Male dogs need the chance to rest and regenerate their sperm numbers in order to produce healthy semen.

What is a healthy amount for your male dog to be mating? 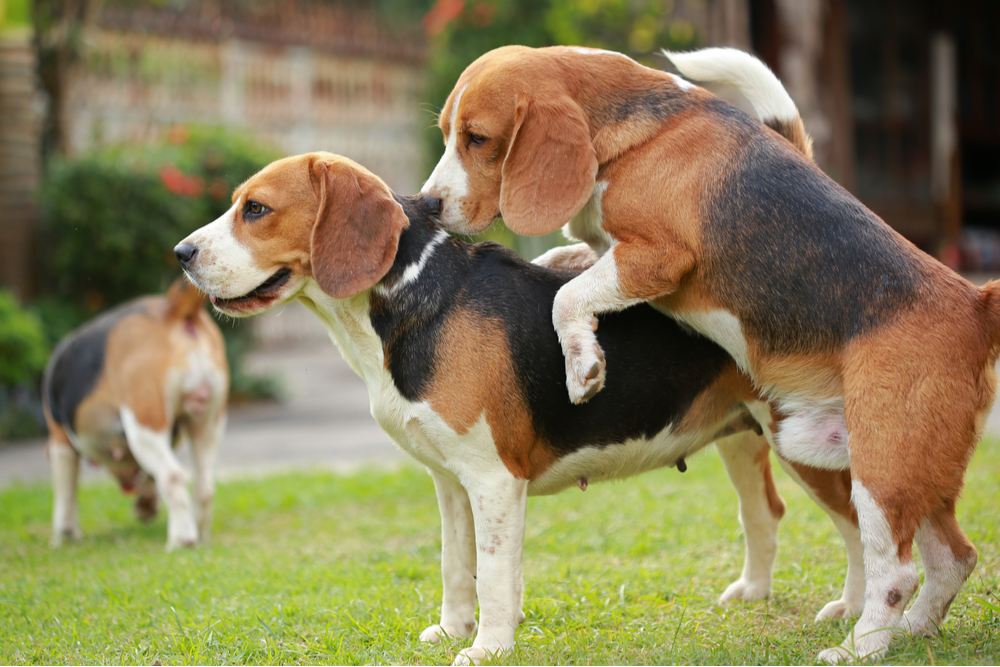 Twice in one day is the absolute maximum a male dog should mate in one day. Any more than this and the sperm levels start to fall, making pregnancy much less likely. Mating once a day, or even better, every other day would be much more advisable. This would give his sperm numbers a chance to regenerate, making success much more likely.

So while it would technically be possible to mate two female dogs in one day, it may decrease his chances of success. If a situation arises where you need to do this then it should be ok to try as a one-off, but it’s not advisable to do it regularly.

What age is suitable for your dog to start mating?

The age at which a dog becomes sexually mature varies between breeds. Small breed dogs will mature quicker than large breeds, as they have a lot more growing to do. Many dogs will show signs of being ready between 6 and 12 months of age. However, you should probably wait a bit later than this.

Though your dog might be able to do the deed from as young as 5 months of age, it would be best to leave it until he’s around 2 years old. This will make sure that he has completely matured and also gives time for any genetic abnormalities to show up. If your dog has a health condition, then you will not want to breed from him as it could pass problems on to his offspring.

How many times can a male dog mate in a month and year?

Again, there is no limit as to technically how many times a male dog can mate, as they can breed all year round. It will all depend on his libido and energy levels. But in order to ensure he is producing good-quality semen, you would probably want to limit the amount he is used.

A good breeder will put their stud dog first and prioritize their health and well-being over any possible financial gain. Some breeders will only allow mating every week or every couple of months to ensure their dog is well rested and produces top-quality sperm.

The timings of matings are usually driven by the female dog. Bitches come into heat roughly once every 6 months, with a window of a couple of days when she is receptive to the male and highly fertile. So, stud dogs follow the bitch’s lead and the amount they mate is driven by the female.

Stud dogs can be difficult to live with. Once they know what mating involves the genie is out of the bottle! They can become difficult to handle and all commands go out the window when they are around a bitch on heat. Some dogs will try and escape to get to a female. Entire male dogs will also be more likely to scent-mark and perhaps have a stronger odor than neutered males.

Make sure you keep your dog in a well-secured yard to prevent escape and keep him on a leash if he is going to be walking in an area where he might come into contact with entire females.

There are hormonal solutions available for male dogs, including an implant that acts as a form of medical contraception. These implants can last for either 6 or 12 months. They may be quite useful if you don’t plan on mating your dog in the near future but don’t wish to take the irreversible step of surgical castration.

When a female dog is “in heat” it means she is having a season and is at her most fertile. Bitches come on heat about once every 6 months. They will usually show external clues such as having a swollen vulva and producing a discharge. This discharge will start off being bloody in color and will then become clearer and straw-colored. This is the point when the female dog is most fertile, which is usually around day 10-15 after the start of her season.

Do male dogs stop trying to mate after being neutered?

Not necessarily! While their libido should be much lower following the reduction in testosterone, there will be some learned behaviors that they may still want to continue with, perhaps out of habit. It’s also worth bearing in mind that neutering doesn’t automatically change a dog’s personality. While it can make for a potentially calmer and easier-to-handle dog, training will still be important to try and correct any unwanted behaviors.

This varies depending on the individual dog. Some dogs will have lower sex drives than others, which can play a part. Older dogs or those with health conditions may tire and lose interest more quickly, due to a decreased libido. Dogs that are generally a bit more chilled and laid-back in personality may also lose interest after mating.

While male dogs with a high libido may want to mate multiple times it would be best to restrict mating to once every other day where possible. Your dog’s health and well-being should be above any financial gain and in order to maintain good sperm quality you shouldn’t overwork him. If you are worried about your stud dog’s performance it would be worth speaking to a veterinarian with an interest in reproductive medicine.