It can be nerve-racking introducing a cat and a dog for the first time, especially if you don’t know how your dog is going to react. Some dogs will act aggressively towards cats as well as other small furry animals, whereas others will just see them as a potential new friend. Here we will explore the body language and signs you should look out for during any dog and cat interactions and also how you can help smooth the path to a better relationship.

How to tell if a dog is aggressive towards cats

Let’s start by looking at some of the body language and signs that could indicate your dog is feeling hostile toward a cat. 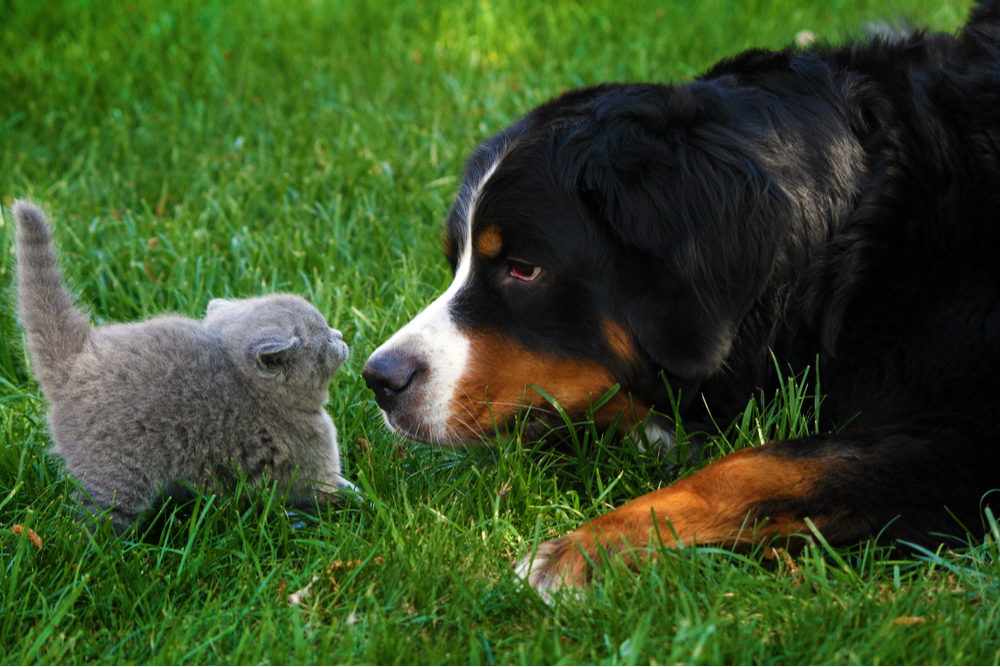 Your dog may start by staring at the cat, not wanting to break eye contact. He might be thinking about his next move, deciding whether to give chase. If the cat makes a wrong move your dog will spot it.

Your dog may growl at cats, usually in a deep rumbling tone. Sometimes this will escalate into excessive barking too. Both are an attempt to warn the cat away, telling it to back off. This might be enough for the cat to retreat, and the situation will diffuse. If the cat holds its ground though, your dog may up his signs of aggression further.

Dogs can be particularly aggressive around resources such as food bowls and beds. They may show guarding behaviors, wanting to keep these items all for themselves. Aggression may escalate more easily when animals are competing for something in this way. 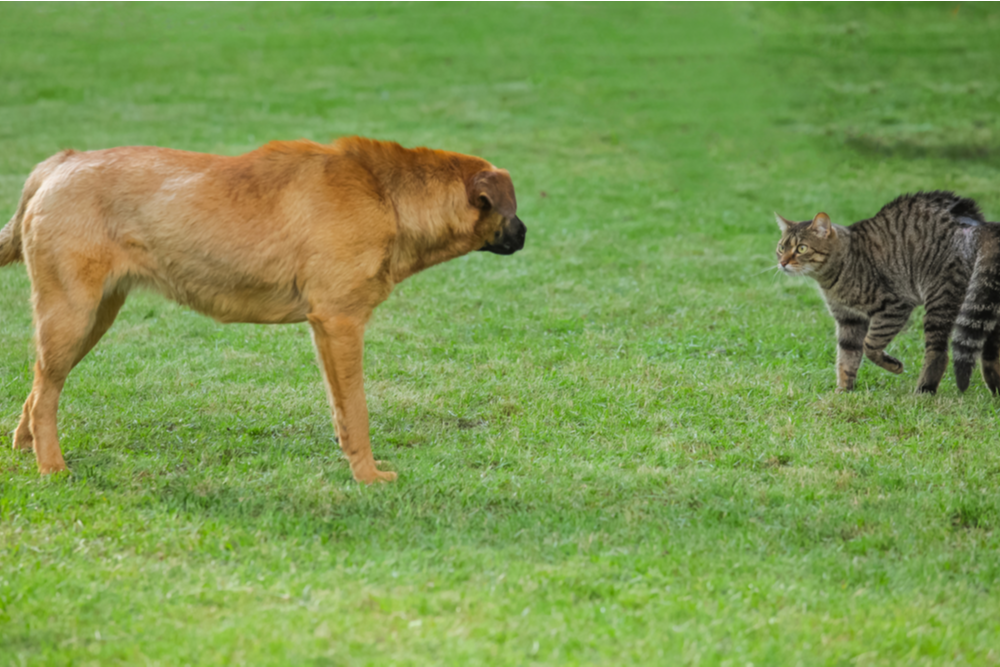 Your dog may show signs of hostility by standing in the cat’s way, blocking their escape routes. This is an attempt to appear more dominating and threatening to the cat. Your dog may show other signs too, like a slow wag of his tail (as opposed to the usual fast, happy wag)—the tail is usually tucked down and tense.

If the cat ignores your dog’s attempts to scare it away through things like staring and growling, you may see him assume an attack stance. This could involve putting his hackles up, with the fur on the back of his neck standing on end in an attempt to make himself look bigger and more threatening. They may also flatten their ears backward and start baring their teeth. You should intervene quickly at this point as the cat is at real risk of getting hurt.

Some dogs will leap straight into chasing, whereas others will display some of the other warning signs first. Dogs may rush quickly towards the cat, testing to see if it will stand its ground or run off. If the cat does run, then your dog might give chase properly. Chasing could easily escalate into fighting as your dog attacks and the cat tries to defend itself.

Reasons behind canine aggression to felines

There are several reasons why dogs may act aggressively towards cats.

One reason is prey drive. Some breeds of dog have a high prey drive, meaning they are more likely to give chase. These animals have been selectively bred over the years for this characteristic, so it can be hard to train it out of them. Greyhounds, for example, are well known for running and chasing (think about the fake furry rabbit they chase around the track), as are terriers that were bred to chase and hunt prey.

Some dogs will be aggressive because of a previous bad experience with a cat. If a cat attacked them or scratched them at some point, they may have a negative association and be on their guard for future encounters.

For others, it may be because they fear the cat is competition for resources like food, sleeping space, or even your affections. If your dog feels threatened by the presence of a cat it may act aggressively.

Can dogs and cats get along?

Yes, they can, but you must get those initial introductions right. If you rush things then the chances of it backfiring are high. Some cats and dogs may only ever tolerate each other, whereas others can grow to be quite close, especially if they are introduced while still young.

How to encourage dogs and cats to get along

Here are some practical things you could try to help your dog accept a cat into the house more easily.

Proper introduction with your dog on a leash

Even if your dog is usually relaxed and friendly, don’t let your guard down. Your first introduction to the cat should be done under control. Having your dog on a leash means you can stop any chasing occurring or pull him away if he starts showing signs of aggression. You may find you don’t need to do either of these things, but it’s better safe than sorry.

Let them interact only when you are around

Particularly in the early days, you should only let your cat and dog interact when you are around to supervise. If you go out, you should make sure your animals are securely shut in separate areas of the house. Even if you trust your pets, accidents can happen, so you might decide it is safest to always keep them apart when no one is around.

Let them each have their own safe areas

Your dog and cat should have separate safe spaces where they can retreat from each other. A stairgate can work quite well to divide areas of the house, with many cats being able to fit through the bars or jump over it if they want to get away from the dog. Similarly, a dog may appreciate a zone of the house where the cat is not allowed to go so that he can rest without being on guard. This will create a much less tense environment and reduce the risk of aggression.

Taking your dog to obedience or behavior classes is a good idea, as a well-mannered dog makes life easier generally. Your dog will be more in tune with you and will respond to your commands more effectively, which can help when you are introducing them to your cat. Training classes are also great mental stimulation, which, when coupled with plenty of exercise, will lead to a tired, happy dog that is less likely to be aggressive.

Raise them together from a young age 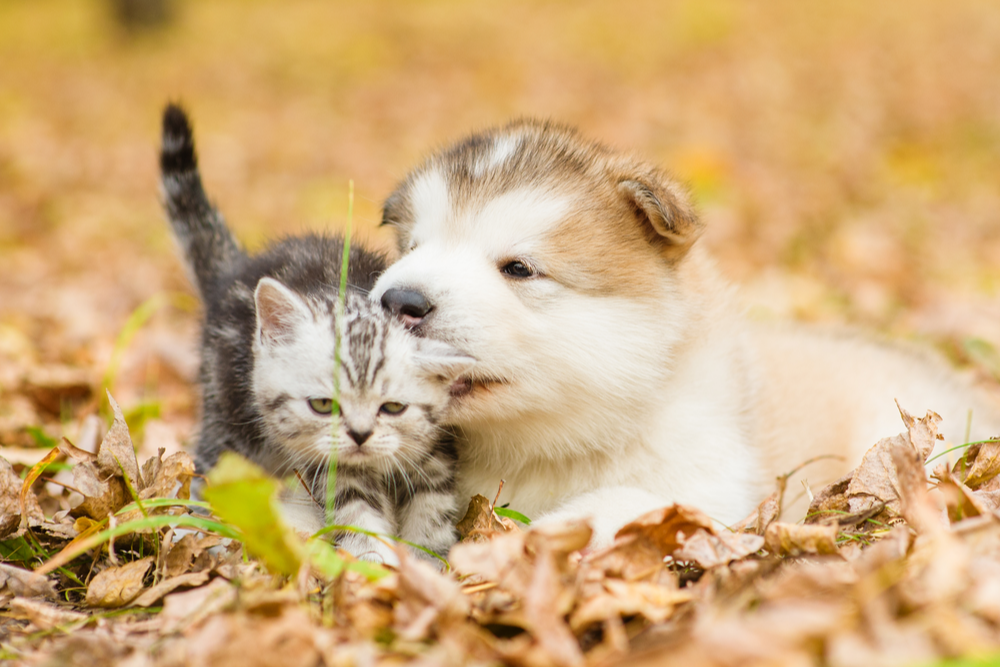 Introducing animals while they are young is usually the best way of guaranteeing success. Puppies and kittens are far less likely to show aggression to each other and may even treat each other as substitute littermates.

While cats and dogs aren’t renowned for being the best of friends, there are certainly some things you can do to try and help improve their relationship. Just bear in mind that despite your best efforts, there may be some individuals that will never tolerate each other. But if you take things steadily, and follow some of the tips, you may be able to increase your chances of success. If you are struggling, then speak to a veterinarian or animal behaviorist for further advice.