One of the most common questions I’m asked as a veterinarian has to be ‘what human foods are toxic to dogs?’ Dogs are part of the family and many pet owners are understandably curious to know if their favorite foods can be safely shared with their four-legged friends. This article will cover some of the most common foods that are safe for people, but dangerous for dogs… 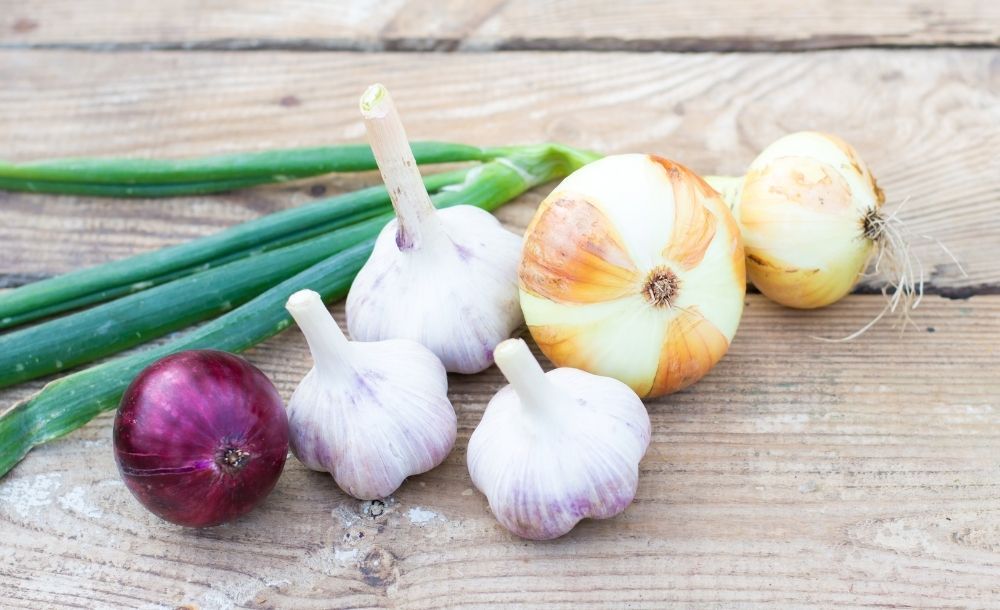 Though delicious on top of a pizza, foods containing onion and garlic should never be shared with your pup. In fact, any plant belonging to the Allium family, including onion, garlic, leek, chives, and shallots is highly toxic to dogs. They are equally dangerous in any form whether raw, cooked, or dehydrated, and onion and garlic powders can be found in everything from instant soups to sauces.

Toxicity is caused by a chemical known as N-propyl disulfide which damages healthy canine red blood cells, leading to their destruction by the body (hemolytic anemia). This is a serious and life-threatening condition and even a very small amount of onion or garlic has been known to cause red blood cell damage.

Though the toxic dose can vary depending on the individual, studies have suggested that dogs that have eaten an equivalent of 0.5% of their body weight or more consistently show signs of onion toxicity.

This means smaller dogs are much more susceptible, for example, a 12lb (5kg) Jack Russell Terrier would only need to eat 25g of onion to receive a toxic dose, but a 45lb (20kg) Border Collie would need to eat 100g (one medium-sized onion). Toxicity is also cumulative, so small amounts over time can do just as much damage.

Though it might be one of our favorite treats, chocolate should never be shared with your four-legged friend! It contains a chemical called theobromine which is highly toxic to dogs, plus another ingredient that’s best avoided – caffeine!

Chocolate toxicity tends to start with vomiting and diarrhea, but at high enough doses progresses to affect the heart, airways, and nervous system – resulting in tremors, seizures, and even death.

For context, this is equivalent to 75g of dark chocolate for a 22lb (10kg) dog or even less. If your dog has eaten chocolate, the first thing to do is contact your veterinarian for advice. A chocolate toxicity calculator can also be useful in this situation but should never replace the advice of a qualified veterinary professional. 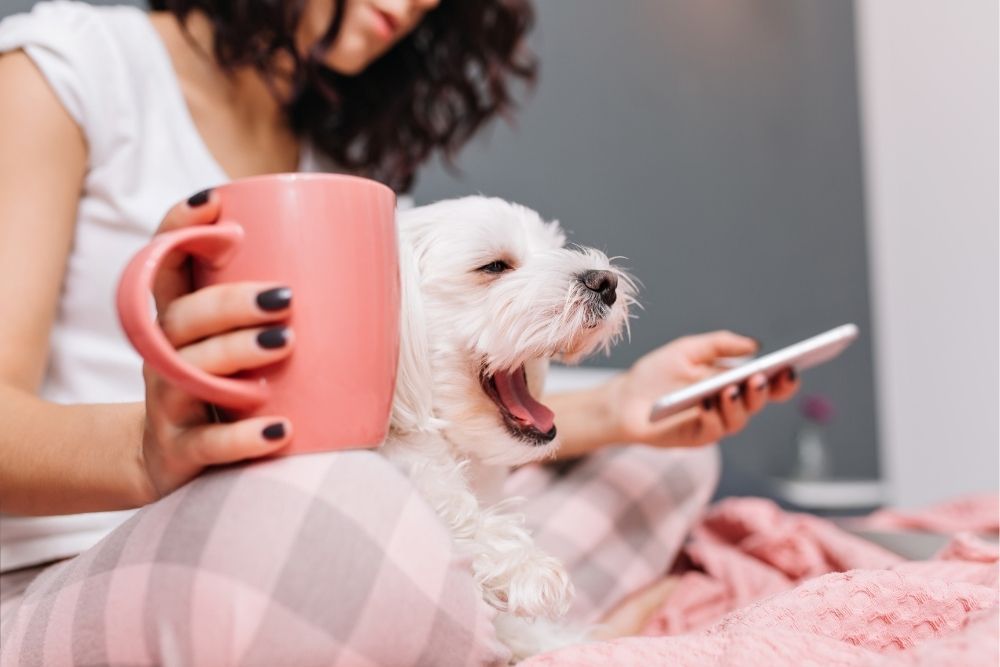 Man’s other best friend, caffeine, is essential to get many of us through a busy day. Just don’t share it with your pooch! Remember, it’s not just your morning cup of coffee that contains caffeine, caffeine is also commonly found in energy drinks, tea, chocolate, and coffee-flavored foods such as ice cream, as well as caffeine tablets and supplements.

Seizures and death are also possible at high doses. Signs of caffeine toxicity are consistently reported after consumption of 20mg/kg (9mg/lb) bodyweight but more severe signs usually occur at 45mg/kg (20mg/lb). This around 3-4 teaspoons of instant coffee for a 12lb (5kg dog).

Don’t forget other things in coffee are dangerous too! Whilst regular sugar, milk, and cream aren’t poisonous to dogs, high levels of fat or sugar may cause an upset tummy or in severe cases pancreatitis (inflammation of the pancreas and associated illness). Artificial sweeteners containing xylitol are also highly toxic to dogs and even small amounts can be fatal if consumed. 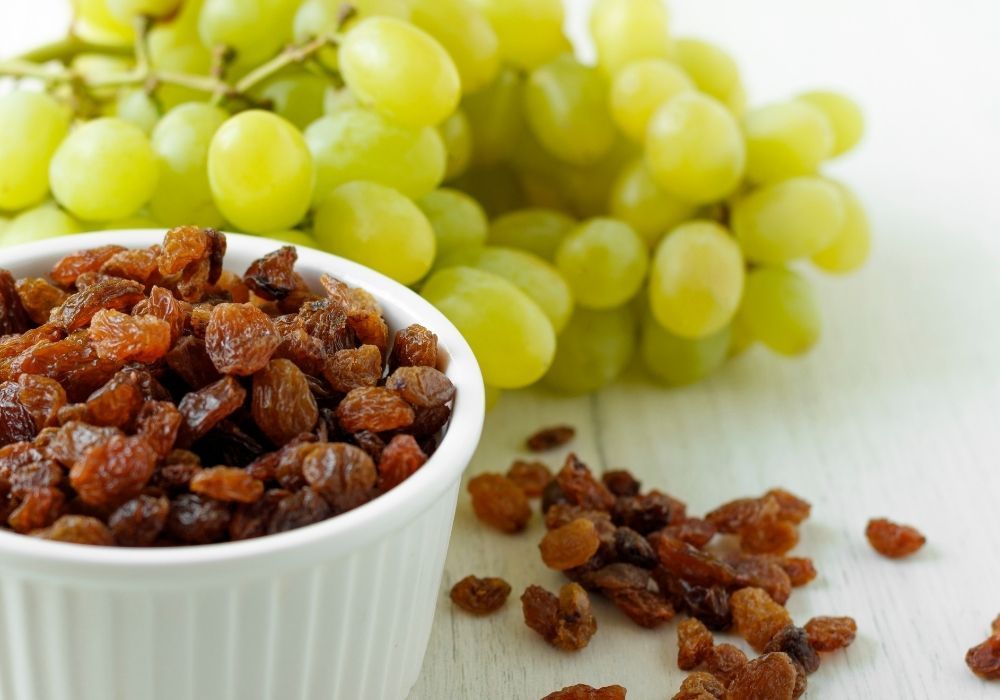 Currents, raisins, grapes, and sultanas in any form (fresh, dried, cooked) or baked into foods like cakes, bread, or bagels should be avoided by dogs at all costs. Remember most trail mixes and many kinds of cereal will contain these ingredients too. But why are they so toxic to dogs?

The truth is we still don’t fully understand the mode of action that causes grape and raisin toxicity. Scientists have suggested molds and fungi that produce mycotoxins could be a cause, and a possible connection with the chemical tartaric acid has also been considered recently.

The difficulty with grape and raisin toxicity is that the toxic dose is currently unknown and seems to be extremely variable. Some dogs have been known to eat slices of fruit cake with no problems but others have died after eating a few raisins or grapes. This does not seem to be related to breed or size so it’s much safer to avoid them completely! From peanut butter to protein bars, candies to chewing gum, artificial sweeteners have become a popular low-calorie addition to many of our favorite products. But one in particular is extremely hazardous to our furry friends.

Xylitol causes blood sugar (blood glucose) levels to drop dangerously low in dogs (hypoglycemia) and can also cause severe liver damage, both of which can be fatal.

Ingesting more than 0.1g/kg of xylitol can affect blood glucose levels, with liver failure reported at doses higher than 0.5g/kg. For reference, one stick of chewing gum can contain up to 0.3g of xylitol, meaning even one or two sticks would be enough to cause toxicity in a small dog or puppy.

Products that may contain xylitol include: 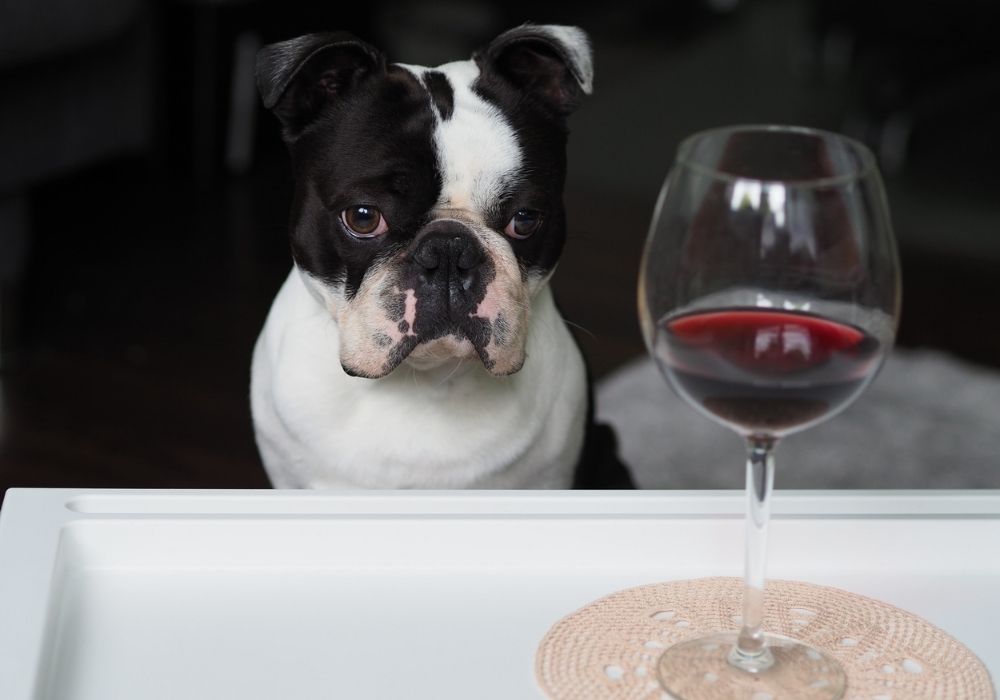 Don’t let an unattended glass of wine end up with a trip to the ER. Dogs are highly sensitive to alcohol intoxication which can cause vomiting, disorientation, low blood pressure, low body temperature (hypothermia), tremors, seizures, and even death.

Alcohol in the form of ethanol can be found in many common household items as well as in your favorite beverages. These include hand sanitizer, perfume, cologne, rubbing alcohol, cleaning products, food flavorings such as vanilla essence, and some liquid medications or mouthwashes.

If ingested, the yeast from raw bread dough will also produce alcohol in the gut as it ferments, which is then absorbed into the bloodstream at levels that can be toxic for dogs.

Other common alcohols include isopropanol (rubbing alcohol, cleaning products), and methanol (anti-freeze, wood alcohol), and each of these vary in potency, with isopropanol twice as potent as ethanol. As little as 0.5ml/kg isopropanol can cause signs of toxicity if ingested, with 5.5-7.9ml/kg of 100% ethanol reported to be a fatal dose for dogs.

A guide to the alcohol content of beverages and household items can be found here but should not replace urgent veterinary advice if your dog ingests any volume of alcohol. 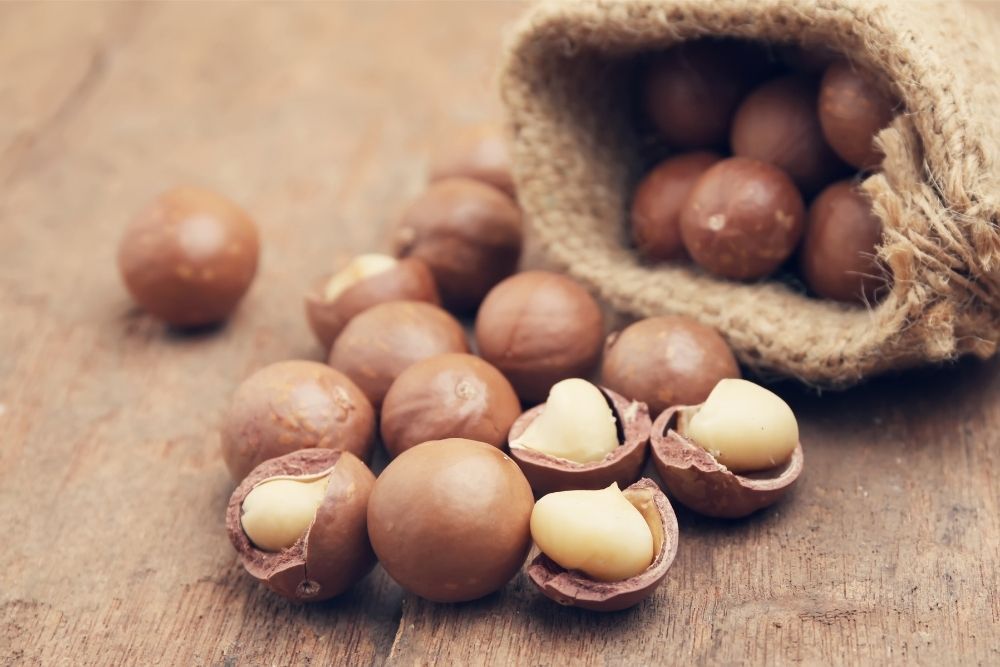 Another unusual toxin known only to affect dogs is the macadamia nut. Like grapes, the mode of action that causes toxicity is still unknown. Remember, macadamia nuts are commonly found in cookies, chocolate (also toxic!), as well as some trail mixes, and granola bars.

Signs of toxicity are expected at doses over 2.4g/kg and include weakness, vomiting, wobbliness, and tremors. Fortunately, the toxic effects usually resolve within 12-48 hours with supportive treatment. 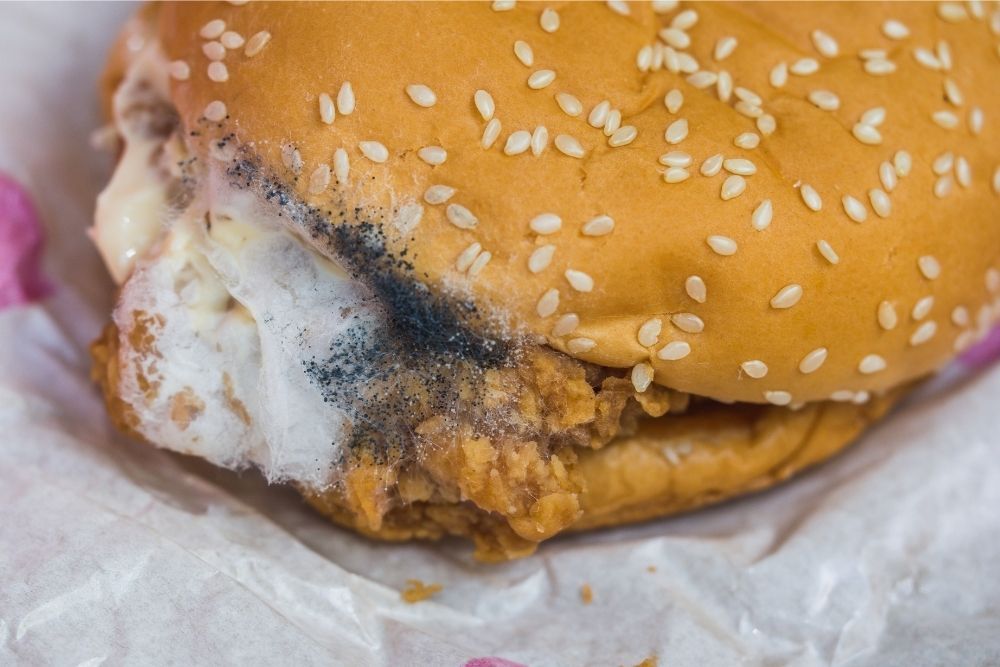 Though we think the moldy leftovers thrown into the trashcan are pretty unappetizing, your dog might think otherwise and decide to help themselves. Unfortunately, there are good reasons why we don’t eat moldy or spoilt food.

Certain species of fungi that form can produce tremorgenic mycotoxins which cause vomiting, diarrhea, and severe nervous system effects like tremors and seizures. The type of fungi that researchers believe produces these toxins is known as Penitrem A and it can grow on meat, cereals, eggs, fruit, processed and refrigerated foods, as well as waste and compost. 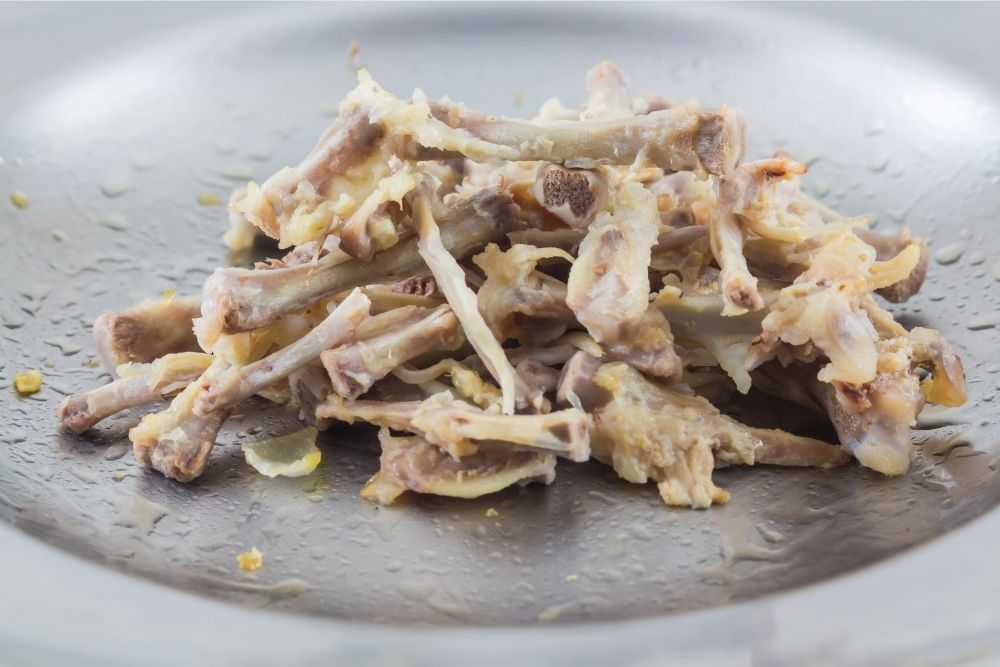 Though these foods aren’t directly toxic, they can both be dangerous for other reasons if eaten by dogs and are best avoided. Cooked bones can splinter, causing injury to the teeth, mouth, and throat. They may also cause a blockage (intestinal obstruction) and can even damage the gut wall, resulting in a life-threatening infection known as septic peritonitis.

Highly fatty foods such as cheese, meat trimmings, avocado, butter, and oil are also hazards as they may trigger pancreatitis – inflammation of the pancreas which can cause severe illness.

Although written by a qualified vet, this article should not replace advice from a registered veterinary professional local to you. If your dog has eaten any of the items discussed throughout this article it’s important to contact a veterinarian or the Pet Poison Helpline as soon as possible.

Even if the amount seems insignificant compared to the toxic dose listed, these are only to be used as a guide as the effects can be unpredictable, and young puppies, certain breeds, or dogs with an underlying illness may be much more sensitive.

Many of these toxins for dogs don’t have specific antidotes, but prompt treatment within the first two hours after exposure can be life-saving.

Dr Ellen grew up in Australia, and after graduating worked as a vet in New Zealand before travelling to the UK. She now works as a relief vet, covering holidays and helping clinics out when they’re short staffed. She loves all things animals, and is passionate about animal health and client education.