About The Jack Russell Terrier 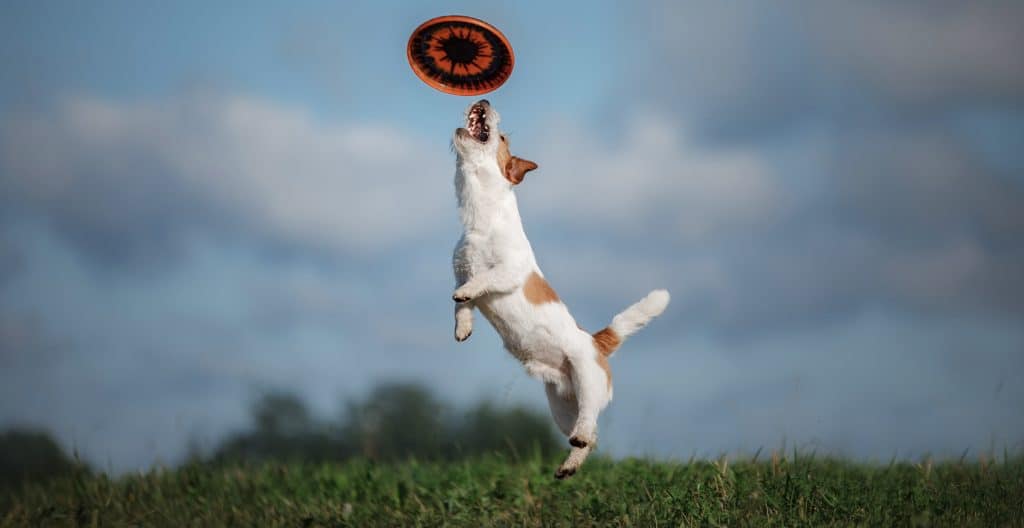 The Jack Russell Terrier, a feisty little white dog with a fiercely independent nature, is a highly recognizable and much-loved breed. Developed in England in the mid-19th century by the Reverend John “Jack” Russell, this hardy dog breed’s original purpose was to accompany its owners on fox-hunting expeditions. The Reverend (Parson) Russell sought to create the ideal hunting dog with the stamina and conformation to easily traverse the English countryside in packs on a hunt.

A breed of great athletic prowess, the Jack Russell Terrier has boundless reserves of energy and is renowned for its flexible and agile body. The Jack Russell is extremely clever and possesses an immense prey drive, making it well-suited to hunting. The breed is characterized by its stubbornness, making it a challenge to train.

The handsome Jack Russell Terrier is the popular star of many TV commercials, movies, and print ads. A dog that can be highly entertaining, the Jack Russell requires an authoritative owner that is committed to providing regular vigorous exercise and consistent boundaries. If this breed’s activity requirements are not met on a daily basis, the Jack Russell will have no difficulty creating its own fun, resulting in nuisance behaviours which often include destruction.

A typical terrier, the Jack Russell loves to run, play, dig, and bark. The breed seems to have inexhaustible stores of both physical and mental energy. The Jack Russell’s high prey drive means it will take great delight in chasing any small animal. Since the Jack Russell Terrier will chase, and in some cases kill, small animals such as rabbits and cats, owners must exercise responsibility by keeping their dog safely contained at all times.

The Jack Russell Terrier is bold and confident in the field yet loving and affectionate with its family. A dog that craves the company of its loved ones, the Jack Russell delights in spending time going on adventures with its favourite people; particularly if they involve opportunities to be active such as hiking, jogging, or even swimming. However, the Jack Russell is known to be short-tempered with foolish or rough behaviour and for this reason is best-suited to homes with older children.

The Jack Russell’s energy and intelligence can lead this pooch into mischief. The leading cause of death in the breed is car collision as a result of chasing an animal the dog considers prey. A clever pooch, the Jack Russell can outsmart even the most forward-thinking owner. For this reason, a secure and reinforced containment system is necessary to keep this dog safe from harm.

The Jack Russell Terrier is not a breed for the first- time dog owner due to its intense prey drive and stubborn nature. This dog breed needs an owner that will establish authority to earn the dog’s respect. In the absence of a strong leader, the Jack Russell will assume the role itself, a situation no family wants to encounter.

Though the Jack Russell Terrier is considered a small breed, they will not thrive in an apartment due to their extremely high activity levels. A home with a securely fenced yard is the best living situation for this lively, energetic breed.

A breed which was developed in England in the mid-19th century, the Jack Russell Terrier was borne out of a desire to produce a working dog with the stamina, intellect, and drive to flush quarry from beneath the ground when out on a fox hunt. The Jack Russell takes its name from the Parson John “Jack” Russell who undertook the task of creating this new dog type by selectively breeding from the fox-working terriers of the day to create this novel prototype.

By the 1930’s, the Jack Russell Terrier had gained popularity in the United States. Some controversy began to exist regarding interest in having this working breed compete in conformation events which many Jack Russell purists believed would compromise the dog’s ability to maintain its roots as a hunting dog. 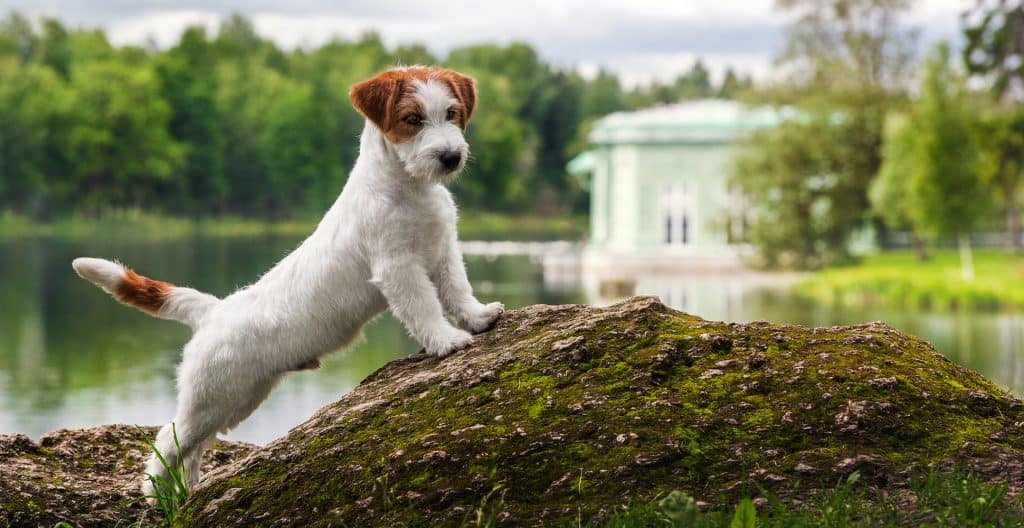 The breed standard outlined by the Jack Russell Terrier Club of America permits heights ranging from 10” to 15” at the withers for this popular breed. Weights should be proportionate to the height of the dog and can span from as little as 9 pounds to as high as 17.

A small dog with an immense personality, the only main consideration owners must give to owning this dog breed is the need to provide a securely fenced containment system as the Jack Russell is ingenious when it comes to ways of escape. Due to the breed’s size and athleticism, the Jack Russell Terrier may climb or jump over fencing or dig beneath it, meaning all fences should be properly reinforced. 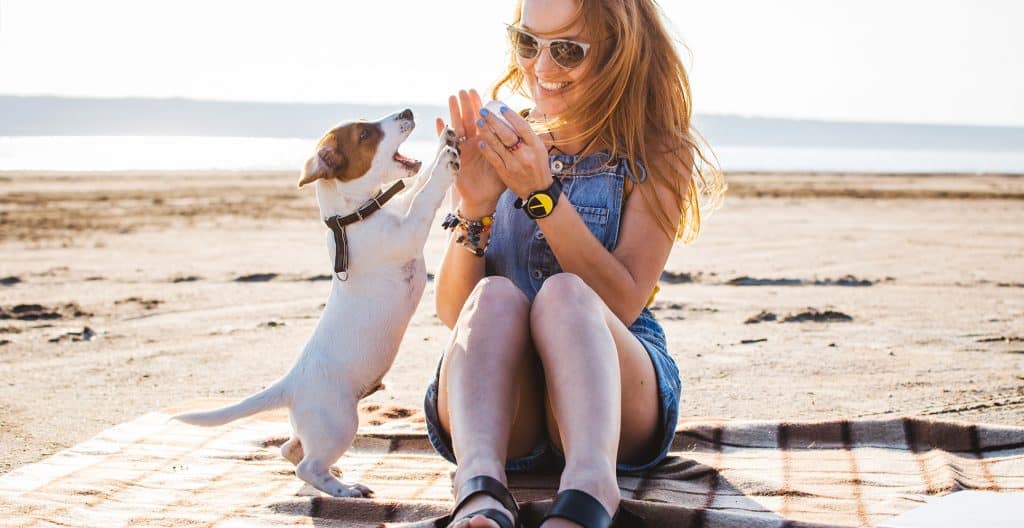 The lively Jack Russell Terrier is a dog with personality to spare. A breed that is intensely loyal and affectionate, the Jack revels in lavishing its family with attention. The Jack Russell can be very comical but is also prone to mischief. The breed is highly intelligent but independent of nature which can lead the Jack to landing itself in hot water.

The Jack Russell is a fearless dog that truly has no concept of its size. This means that the breed will willingly challenge far larger dogs and will not back down from a fight, an attribute which could lead to the dog’s demise.

A breed that is not a fan of change, the Jack Russell enjoys a consistent day to day routine. The Jack Russell Terrier is highly intelligent but is not always a willing participant in training sessions. A dog that bores easily, owners of this cherished breed will need to learn how to motivate the Jack to see training as an opportunity for fun.

The Jack Russell Terrier should display a confident, friendly attitude. Shyness is a serious fault in this breed. Early socialization to a variety of people, places, animals, and novel events can help encourage the natural curiosity for life this breed is known for.

Jack Russell Terriers are not patient with rough handling or behaviour they view as silly. They will snap if feeling irritated. For this reason, they are not suited to homes with young children. All interactions between the Jack Russell and children should be carefully supervised for the safety of both parties.

Because of the Jack Russell Terrier’s intense prey drive, introductions into a home with other pets must be handled carefully. It is best to add a Jack Russell puppy into a home with established companion animals rather than an adult to ensure the best chance at a smooth integration. All greetings should be done slowly and at a neutral location.

The Jack Russell Terrier is not well-suited to apartment living, preferring a home with a large fenced space in which to run and play. Though this breed loves its family, the Jack is okay spending some time alone so long as it is left with something to occupy its time such as a meaty bone or a puzzle toy.

Jack Russell Terriers are born with a double coat that is weatherproof. Though they can tolerate both heat and cold, the Jack Russell should live indoors with its family. 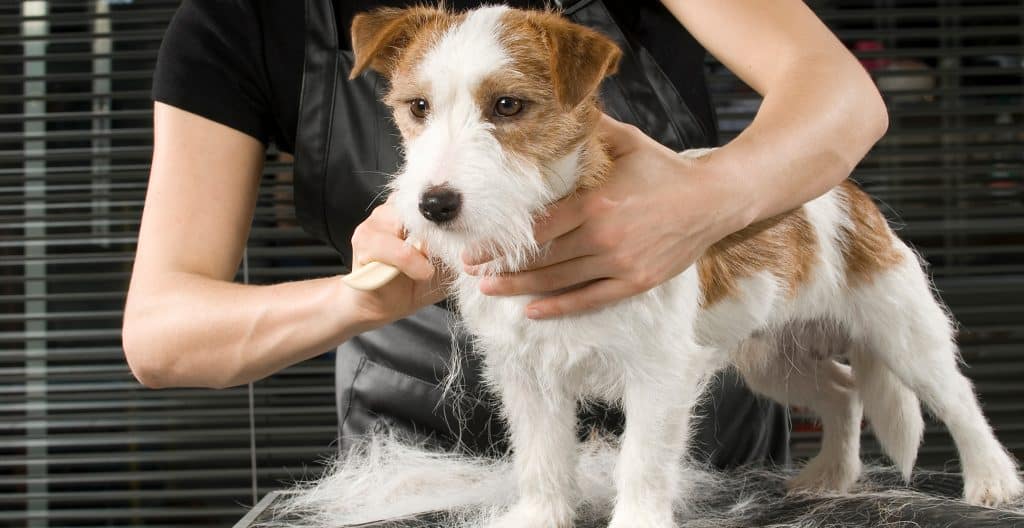 The Jack Russell Terrier is typically a very healthy breed. However, as with all dog types, the breed can be predisposed to certain health conditions. Careful genetic screening and appropriate tests can be conducted on breeding pairs to help eliminate the spread of inherited disease to future generations. The most common genetic conditions affecting the Jack Russell Terrier are primary lens luxation, late onset ataxia, spinocerebellar ataxia, eye conditions, congenital deafness, and patellar luxation.

The Jack Russell Terrier has a double coat that is wiry to the texture. It may be smooth, broken, or rough. The coat should always be straight without even a hint of a wave to it.  To maintain the wiry texture of the Jack Russell’s coat, it should be hand stripped.

Smooth coats require very little work to keep in good condition. Broken coats vary from light to heavy, and their coat needs differ accordingly. A heavily broken Jack Russell Terrier requires weekly brushing at a minimum to help reduce shedding and maintain the coat. Rough coats are the most work though they are known to shed the least of the three coat types.

Hand stripping is a lot of work, and many groomers no longer offer this service. For this reason, pet dogs can visit a groomer to be clipped several times a year to keep the coat from becoming unruly. It is still recommended that the Jack Russell Terrier be brushed several times weekly at a minimum.

The Jack Russell Terrier does not need to be bathed often. In fact, it is best to reserve baths for occasions when the dog rolls in something unsavoury or gets dirty. Nail trims should be done twice monthly to maintain proper foot health. Ears and teeth should be regularly cleaned.

As a high energy breed, the Jack Russell is not prone to weight gain unless the dog does not receive sufficient daily exercise or is grossly overfed.

The Jack Russell is not a breed known for drooling. 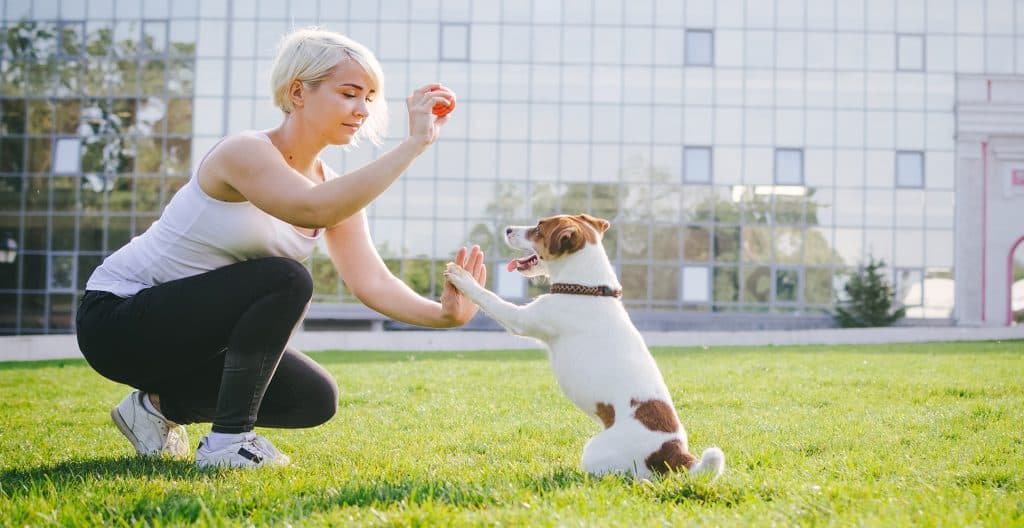 The Jack Russell Terrier enjoys learning fun tricks and takes great pleasure in keeping its fans entertained with its cleverness. The breed is well-suited to many dog performance sports including flyball, agility, barn hunt, earth dog, and scent work. However, Jack Russells are not fans of more structured dog events such as competitive obedience. Due to the breed’s high prey drive, a Jack Russell Terrier should never be permitted off-lead time outside a securely fenced area.

Jack Russells are exceptionally strong-willed and independent. They respond best to positive reinforcement methods. All training sessions should be kept short to increase interest.

The Jack Russell Terrier can be quite mouthy, so it is important to curtail this behaviour early on. To do this, simply redirect the dog to a toy, ball, or bone when its teeth come in contact with skin. Over time, the dog will learn appropriate places to use its teeth and will naturally avoid nipping.

A breed with a very high prey drive, the Jack Russell Terrier will look for every opportunity to escape and will chase other animals if given opportunity to do so. Secure fencing is an absolute must for this breed.

A baying breed, the Jack Russell Terrier loves to bark. All dogs should be taught a “no bark” command to help keep peace with the neighbours. 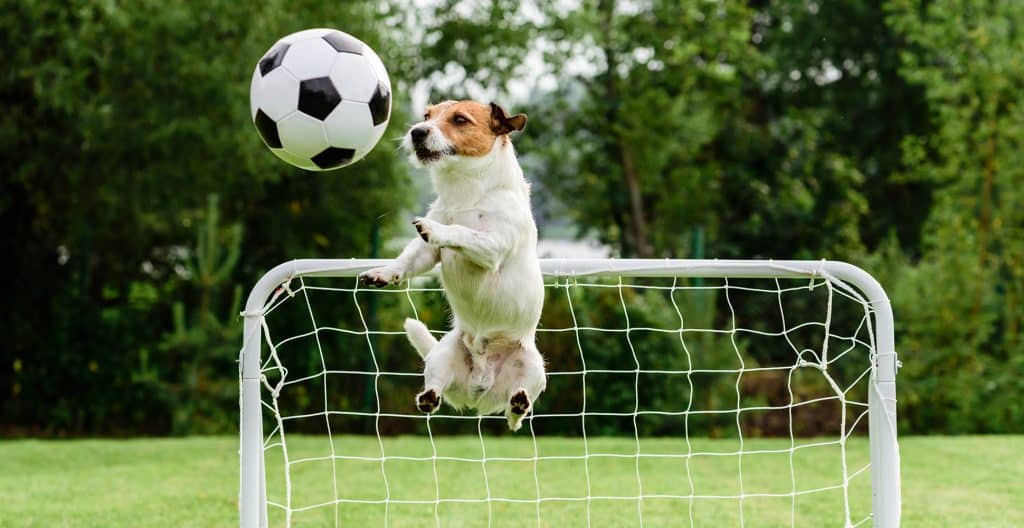 The Jack Russell Terrier has very high activity requirements that must be met on a daily basis. To keep this dog in good physical condition and mentally content, regular vigorous exercise spanning 45 to 60 minutes daily is an absolute necessity.

To escape confinement, Jack Russells will jump, dig, climb, or otherwise outwit even the most sophisticated fencing system. Owners need to remain a step ahead of this breed and to continually be on the lookout for signs of potential escape. Due to high prey drive, the Jack Russell should always be kept on a leash during walks.

The Jack Russell Terrier is a very playful dog breed that delights in every opportunity to engage in games and fun with its family. 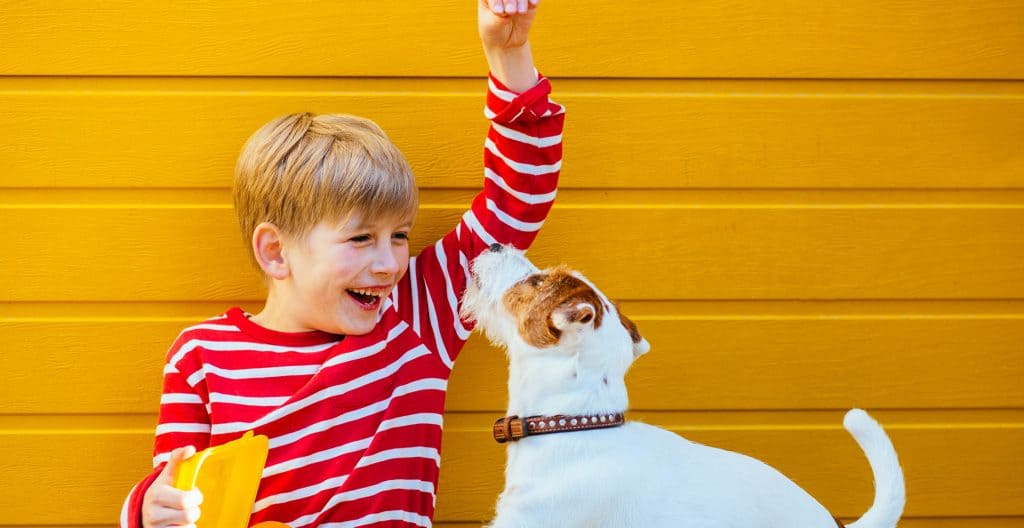 To keep the Jack Russell Terrier well-fed, it is a good idea to consult a veterinarian to ensure the selection of an appropriate food. In general, a high-quality diet that is nutritionally balanced to support the dog’s specific life stage is an excellent choice.

Puppies should always be fed a puppy formulation which is designed to meet the needs of their developing bodies. Likewise, adults should be fed an adult food that is best suited to their age, body condition, and activity level.

The bag of food selected will provide general guidelines as to appropriate serving sizes. Meal sizes should be adjusted to reflect the specific activity level of the dog. The dog’s weight and appetite will serve as an excellent guide. 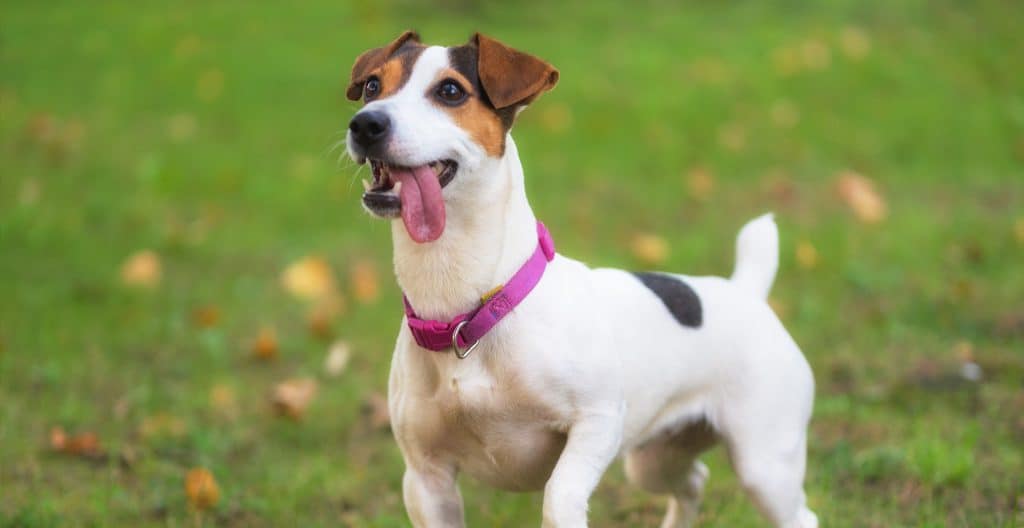 For more information about Jack Russell Terriers available for adoption near you, we recommend the following resources: