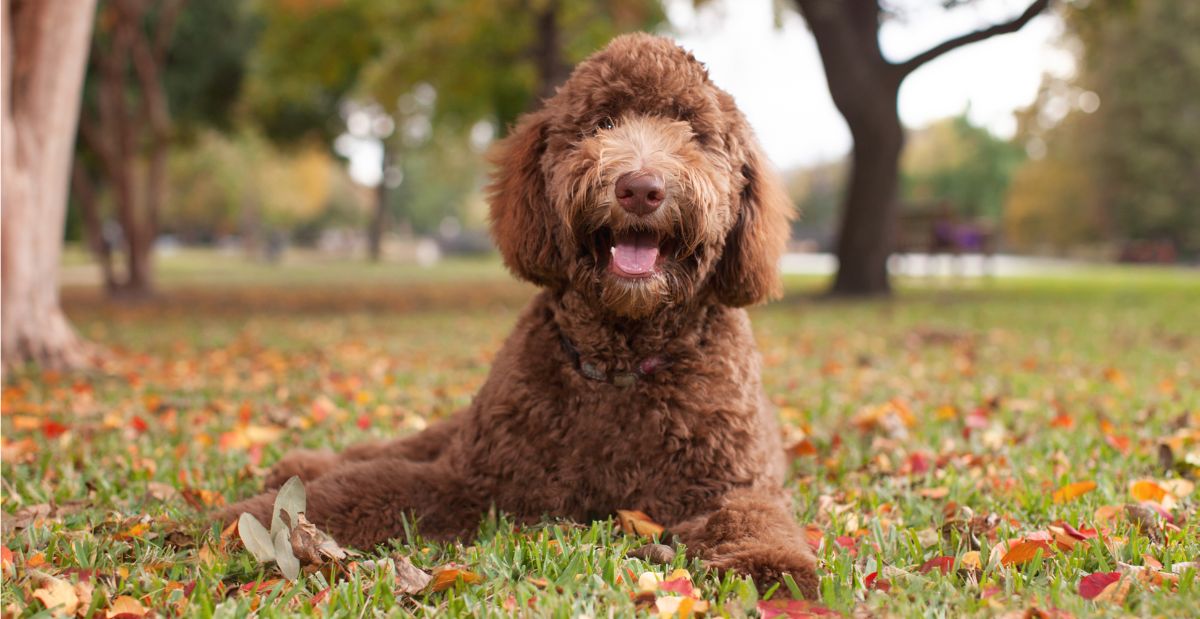 The lively Labradoodle has become an increasingly popular breed throughout the world today. A dog type created by breeding a Labrador Retriever to a Poodle, the Labradoodle traces its roots to Australia where the founder of its breed sought to create a mix that would be suited to service dog work. This cross of dogs was selected for their ease of training and suitability for therapy work as well as for their coat types which would hopefully yield puppies that could be considered hypoallergenic.

A dog that truly delights when in the presence of its family, the Labradoodle is exceptionally loving and affectionate. A high energy breed, the Labradoodle requires a family that is committed to an active lifestyle.

The Labradoodle is an exuberant pooch, taking life by storm. This dog loves people of all kinds; whether family, friends, or complete strangers, greeting each with eagerness and joy. However, the Labradoodle’s enthusiasm can lead him to displaying poor doggy manners. Care must be taken to help this breed learn proper canine etiquette. Thankfully, they are relatively easy to train, possessing the innate intelligence of their parent breeds.

Generally speaking, the Labradoodle enjoys the company of other pets. Though the Labradoodle loves children, their boisterous ways can lead to injury if interactions are not supervised.

The Labradoodle is a very versatile dog. If given sufficient exercise on a daily basis, this pooch will contentedly snooze on the couch by its family. However, one of the breed’s greatest strengths is its love of adventure. This dog will happily go wherever its people do, eager to take part in every activity.

Though the Labradoodle has gained immensely in popularity, the dog we know of today has moved away from the original intentions of the Royal Guide Dogs Association of Australia, the organization responsible for the very first pairing that produced the breed. One of the largest complaints about the breed is that there is still very little consistency in what is produced, a problem that often plagues breeds still in development.

Many Labradoodles favour the traits of the Poodle portion of their pedigree while others more closely resemble the Labrador Retriever side. Though this was intended to be a cross breed, not always do the offspring gain the best traits of both breeds.

One of the biggest inconsistencies seen in Labradoodles is coat type. Though the original intent of the founders of the breed was a low shedding coat, many puppies do not inherit this type of coat at all, meaning the breed cannot be universally classified as hypoallergenic. Unfortunately, the Labradoodle is not a low maintenance dog, requiring daily brushing and regular grooming appointments several times throughout the year.

The Labradoodle adapts well to nearly every lifestyle; however, Standards are best when placed in a home with access to a fenced yard in which to play. 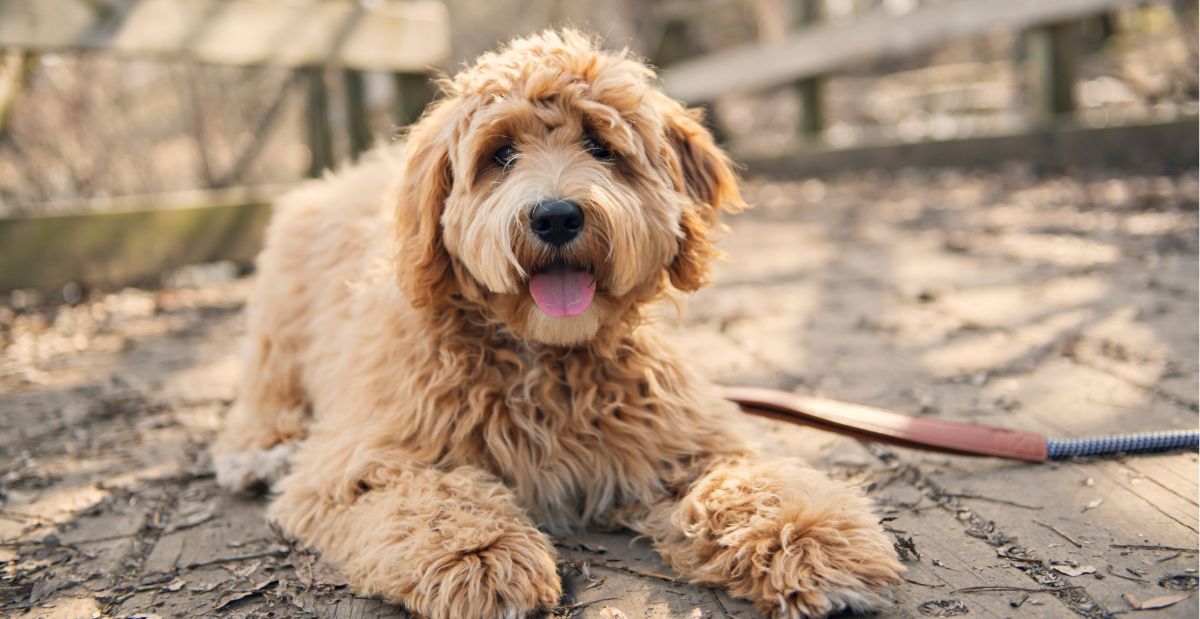 The Labradoodle is a breed that originated in Australia. Wally Conron, employed as a breeder by the Royal Guide Dogs Association of Australia, attempted to produce a dog that would be ideally suited to guide dog work. He selected the Labrador Retriever and the Poodle as the two breeds to use in his hybrid. The first breeding occurred in 1989.

The original dog produced from this cross breeding was named Sultan. Sultan did possess the hypoallergenic coat desired by Conron. In addition to this, Sultan was also exceptionally intelligent and had the desired personality traits to excel at guide dog work. As others saw the strengths of this successful cross breeding, the demand for Labradoodles began to rise. 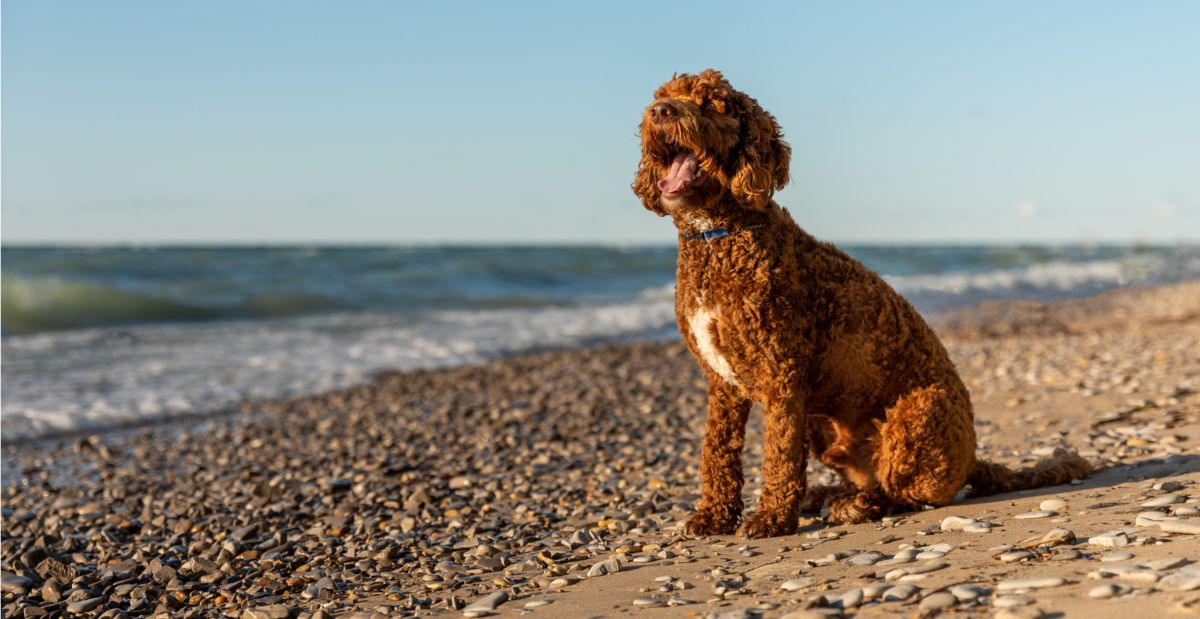 radoodle is available in three different sizes: the Miniature, the Medium, and the Standard. The size of the Labradoodle is largely determined by the size of Poodle parent used in the first-generation breeding.

The Miniature Labradoodle should stand between 14 to 16 inches at the shoulder and weighs from 15 to 25 pounds. By comparison, the Medium Labradoodle is slightly taller at 18 to 20 inches in height and weighs approximately 30 to 45 pounds.

Standard Labradoodles are the largest found in the breed. They typically are 22 to 24 inches at the shoulder and ideally should weigh between 50 to 65 pounds.

However, it is important to note that since there is still a lot of inconsistency in the breed, any size and weight is possible regardless of which size variation purchased by a family.

The most important thing potential owners need to be prepared for with a Labradoodle is their excessively high energy needs. This is not a low maintenance breed. The Labradoodle requires regular daily exercise to remain physically and mentally content. 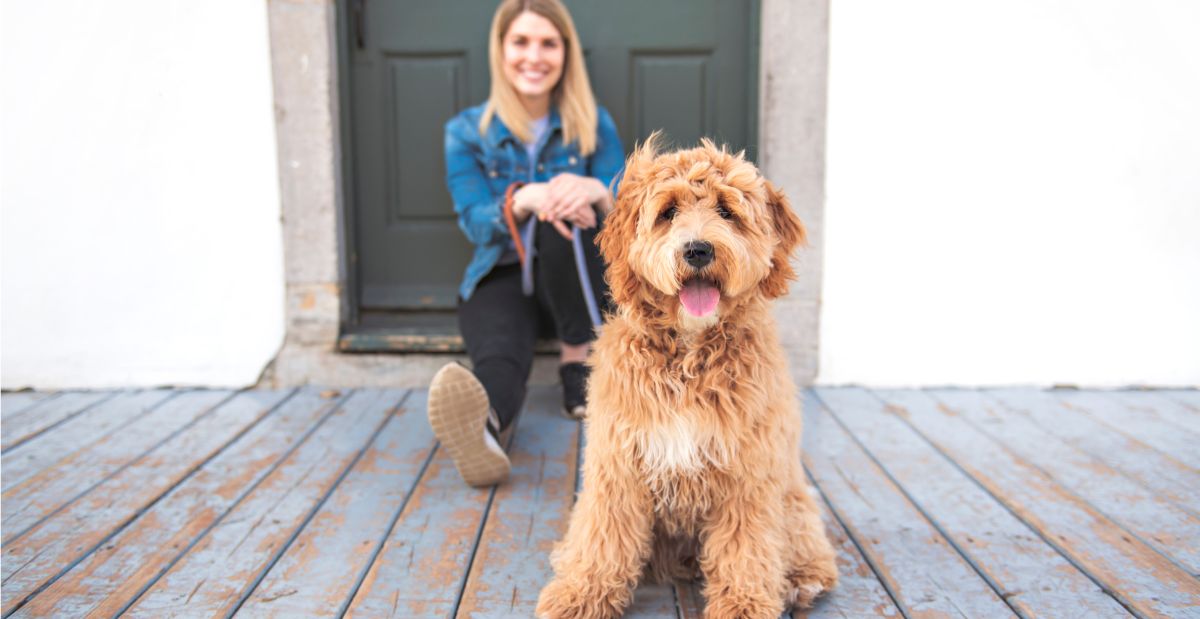 The Labradoodle maintains the intelligence of both of its parent breeds: the Labrador Retriever and the Poodle. However, this dog type is also known to have excessive energy that must be properly expended each day. Training the Labradoodle is not a chore as the breed is eager to please and quite smart. However, manners training is very important for this highly exuberant pooch to remain a polite and welcomed member of society.

An excellent family companion, the Labradoodle is both loyal and loving. They are an extremely happy breed that often communicates their joy through rough play and jumping. Though the Labradoodle loves children, it is important to supervise all interactions between the two to prevent injuries. The Labradoodle means no harm, but its size and exuberance can accidentally lead to injury if care is not exercised.

The Labradoodle loves people, eagerly approaching family, friends, and strangers with curiosity, friendliness, and affection. The breed is equally as fond of dogs and other pets, making it ideally suited to a multi-pet home.

Though the Labradoodle bonds deeply to its people, the breed can be left alone at home for short periods of time so long as toys or bones are left with the dog to keep it productively engaged.

The Labradoodle’s coat makes it well suited to spending time outdoors during cold weather. In the summer months, this dog enjoys spending time in the great outdoors, but during bouts of extreme heat should be kept inside where it is cooler. 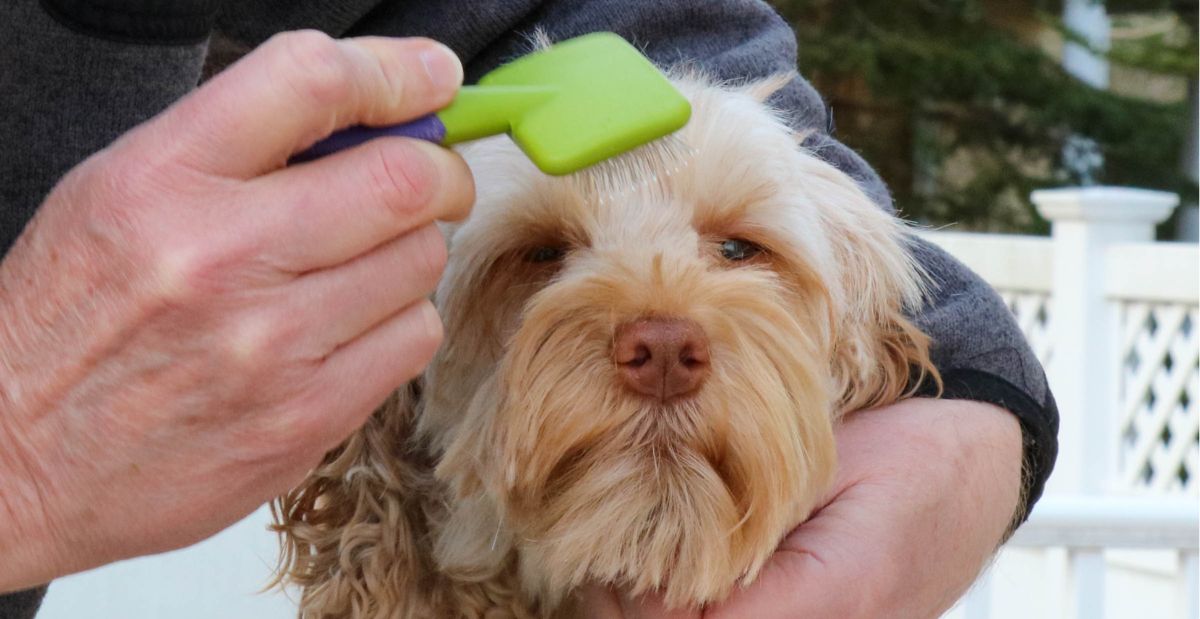 Generally speaking, Labradoodles are exceptionally healthy dogs. However, as with all dog types, they can be predisposed to a number of different health conditions. Among the most commonly identified health problems in the breed are ear infections, hip and elbow dysplasia, epilepsy, allergies, diabetes mellitus, progressive retinal atrophy, and hypothyroidism.

The Ideal coat length for a groomed Labradoodle is 4 to 6 inches. The Labradoodle’s coat consists of only one layer. There is a lot of diversity in coat types in the breed. The hair may range from completely straight to loosely curly.

The Labradoodle has three different textures of coat: the hair coat, the wool coat, and the fleece coat. The hair coat sheds quite a bit and is prone to trapping odours. This coat type is not considered ideal by breeders or owners.

The wool coat has a texture that is akin to lamb’s wool. It is typically loosely curly. Most often, this coat type does not shed, and it is not as likely to retain smells.

The fleece coat is very soft to the touch. It is similar in texture to Angora goat hair. This coat type may appear straight or wavy.

Though the Labradoodle was intended to be a hypoallergenic breed, it isn’t. The breed does shed; however, how much the dog will shed is dependent on the specific coat type.

The grooming requirements for a Labradoodle are quite high. Owners should be prepared to brush their dog daily to prevent mats. A visit to a groomer every few months is also required to keep the coat in good condition. It is recommended that the Labradoodle see a groomer every six to eight weeks.

Regular ear cleaning is an important part of keeping the Labradoodle healthy as they are prone to ear infections. A veterinarian can assist owners with learning the proper way to clean their dog’s ears.

The Labradoodle’s teeth should be brushed several times a week to prevent tartar buildup. Nails are best trimmed at least once a week.

Due to its high activity levels, the Labradoodle is not prone to obesity. However, it is still a good idea to measure this dog’s food and monitor all intake to keep the dog in good body condition.

The Labradoodle is not a known drooler.

The Labradoodle is easy to train with its natural smarts and desire to please. However, the Labradoodle is a soft dog at heart and learns best under positive reinforcement techniques. A harsh hand can harm this dog’s tender spirit.

The Labradoodle is exceptionally playful and can be mouthy. As a result, it is very important to teach the dog at an early age that teeth on skin is not acceptable. Should the puppy attempt to nip or mouth, simply redirect the dog to something more appropriate to chew on such as a toy or bone.

The Labradoodle is not particularly prone to roaming or to barking. 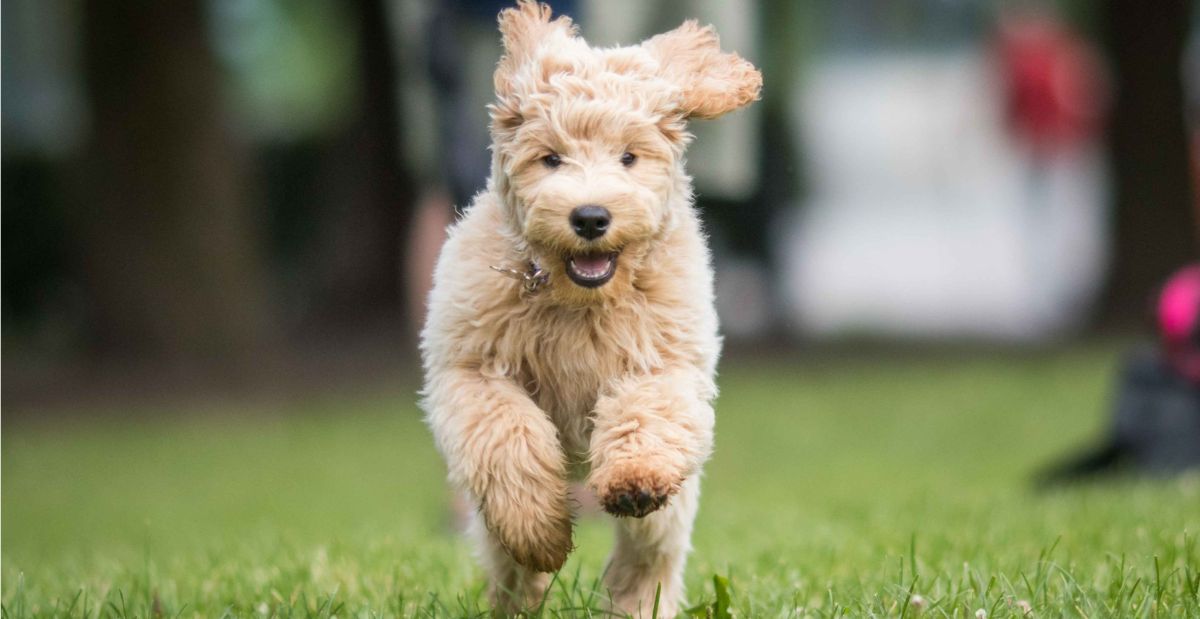 The Labradoodle is a high energy dog and needs to be exercised vigorously daily. It is recommended that the Labradoodle receive 60 minutes of activity each day at a minimum. Labradoodles that do not receive the appropriate amount of mental and physical stimulation can develop nuisance behaviours.

A dog that enjoys time spent with its family, the Labradoodle is exceptionally playful. 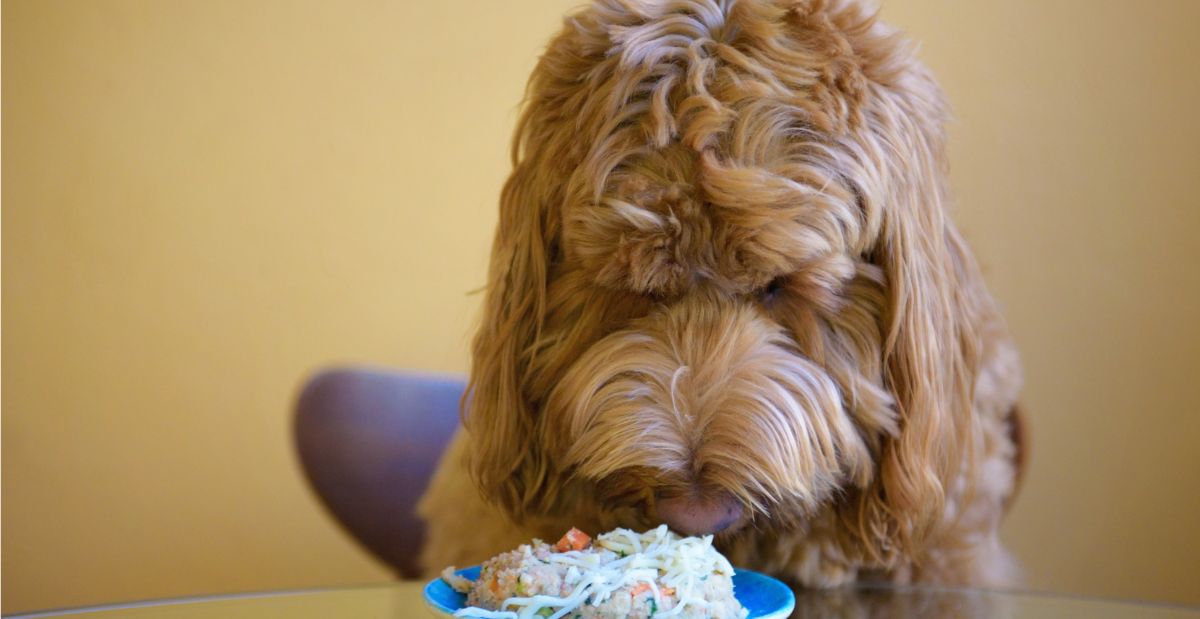 To ensure that the Labradoodle receives all of the daily nutrition it needs it is a good idea to visit a veterinarian for food recommendations. In general, the breed thrives on well-balanced diet comprised of exceptional quality ingredients.

Puppies should eat a puppy formulation to support their developing bodies. Likewise, adults should eat a food that is designed to meet the unique requirements for their age and activity level.

To determine how much to feed the Labradoodle, the serving size suggestions on the side of the bag are helpful. Since each dog is a unique individual, these amounts may need to be adjusted to reflect activity level and/or weight.

If you are looking for Labradoodles for adoption near you, we highly recommend the following comprehensive resources: