What is a Merle French Bulldog?

We all know the French Bulldog, with that large head, short snout, and big ears. They’re adorable, playful, and very charming, making them one of the world’s most popular small dog breeds. Frenchies come in a lot of different colors, but have you ever heard of a merle Frenchie?

The merle pattern is caused by a specific gene that affects the dog’s coat color, as well as their eye color and skin pigment. The merle gene is dominant, which means that it can cause the merle coat in a puppy even if only one parent has the gene.

It’s important to note that the Kennel Club and American Kennel Club don’t recognize Frenchies with the merle pattern as an official French Bulldog, as it doesn’t meet the breed standards.

This is likely because to create the merle color in a Frenchie, breeders usually cross breed with a different breed, commonly merle chihuahuas, to get the gene they’re looking for. This means that merle Frenchies may not be a pure breed.

Breeders may breed two merle Frenchies together to continue the line of merle French Bulldogs. This is often referred to as a ‘double merle’ Frenchie or ‘double merle dogs’ because they inherit the merle gene from both the mother and father.

Frenchies with a merle coat are beautiful to look at and come in a range of colors. Let’s take a look at the variety of colors. 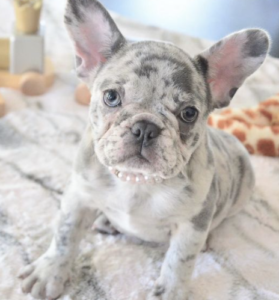 The blue merle French Bulldog is one of the rarest colors of Frenchie. Blue Frenchies actually have a black coat that is diluted to create that beautiful ‘blue’ type of color. The blue base coat color has more of a blue tint than a true blue color and is very unique against the darker patches of pigment.

The merle gene also affects their eyes, causing the blue French Bulldog to have bright blue eyes which are very striking to look at. Most blue merle Frenchies will maintain this blue eye color throughout their life, unlike some other merle colors where the eye color changes as the dog reaches adulthood. 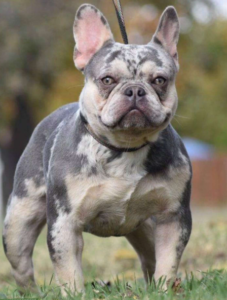 When it comes to rare colors, Frenchies with a lilac merle coat can be just as rare, if not rarer, than the blue merle Frenchie. The lilac hue comes from a combination of the brown and blue coat colors. The blue coat is further diluted, creating a beautiful, unique coat with a slight lilac appearance.

Lilac merle French Bulldogs tend to have bright blue eyes as puppies. Some will maintain these light eyes as they reach adulthood, while for some their eyes will get darker as they get older. 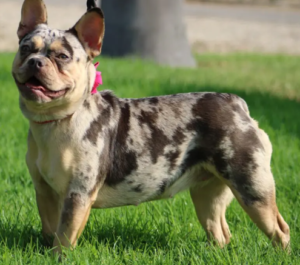 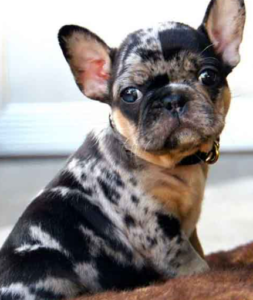 Black Frenchies are stunning to look at, but when you add in the merle patterning, they’re even more beautiful! The gene for a black coat in Frenchies is a dominant gene, so this makes the black merle Frenchie less rare than the others.

Black merle French Bulldogs have a stunning jet black pattern which is striking set against the rest of the coat which is typically a gray or brown color. They can have blue eyes but this depends on their genetics and isn’t guaranteed. 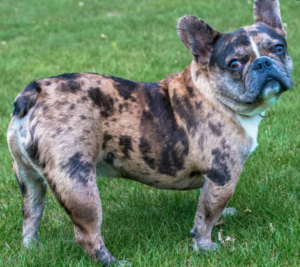 A fawn coat color refers to a light, yellowish tan color, similar to a tan French Bulldog. A fawn merle French Bulldog has patches of fawn fur on their coat, set against a lighter color. This is quite a rare combination, but not as rare as some of the other colors we’ve mentioned here.

You might also hear of the white merle Frenchie: They have the traditional white base color like standard white Frenchies but have darker markings of brown or tan. White French Bulldogs with this color pattern are one of the more common colors of merle but are still fairly rare in general.

How Much Does a Merle French Bulldog Cost?

A French Bulldog in traditional colors is typically very expensive, especially as they’ve grown in popularity in recent years. They typically cost between $1500 and $3000, depending on where you live.

Since Merle Frenchies are so rare and unique, they can cost much more than this. You can expect to pay $7000 and upwards for rare French Bulldogs.

The price will depend on where you live and how reputable the breeder is among other factors. Keep in mind that if a merle Frenchie is offered at a cheap price (meaning much less than we’ve mentioned), then it’s likely not coming from a reputable breeder.

Remember that this is the cost to buy the dog to start with you. You also need to consider the costs of keeping your dog, for example, harnesses, leads, food, toys, beds, and so on.

Health costs can be high especially with merle Frenchies, as they do tend to struggle with a lot of health issues throughout their life (we’ll discuss this more later).

It’s important you ensure you are ready and able to fund your dog’s lifestyle before you buy a merle French Bulldog. Dogs are a lifelong commitment and they deserve the best care.

Advice Buying a Merle French Bulldog From a Reputable Breeder

Getting a merle Frenchie (or any dog) from a reputable breeder is key because this ensures they get the best start in life. It reduces the risk of health issues so you can have a healthy, happy puppy to enjoy your life with. It also ensures you aren’t accidentally funding the puppy farm trade.

Below are some tips to follow to help you find a responsible, reputable breeder:

Take your time to look around online and find breeders that look reputable. Keep an eye out for mentions of registration with organizations like the Kennel Club. Even though merle Frenchies can’t be registered with the Kennel Club, the breeder still might be, especially if they also breed regular Frenchies or other breeds.

They should also have a local authority license or breeding license, which gives them permission to breed and sell puppies. You may see mention of this on their website or puppy advertisement, but if not you should always ask to see it.

If you know someone who has bought a puppy and they can recommend a good breeder, even better! Sometimes word of mouth is the best way!

2. Chat With The Breeder

Before you go to meet the breeder and the puppies, chat with them on the phone to get a feel for them. Don’t be afraid to ask plenty of questions and voice any worries you have.

A good breeder will be patient and open to questions. They won’t try to rush you or brush your concerns aside.

It’s important you meet the puppies in their home environment at least once. You should always be able to see the mother and father, as well as the rest of the litter. This allows you to see that they’ve been bred responsibility and are well taken care of.

Have a quick check that the mother looks healthy. She should look comfortable, well-fed, have bright alert eyes, and be in a clean environment.

The puppies should be breathing normally, be clean, have bright eyes, and be fairly energetic (of course, this depends on what age they are when you visit them).

Again, a good breeder will answer any questions you have and allow you to take your time during your visit. You can ask to visit more than once so you and the puppy you choose can get to know each other before they go home with you. If a breeder suggests this themselves, this is a great sign!

Puppies should never leave their mother until they are at least eight weeks old. If a breeder is willing to let them leave earlier, this is a red flag! Not only is this immoral, but it’s also illegal.

A good breeder will provide paperwork to prove that the puppy has been vaccinated, wormed, and microchipped. Keep in mind that microchipping is a legal requirement in many places.

If they don’t offer this or aren’t happy to provide it when asked, it’s best to avoid the breeder as this is a basic requirement to ensure the puppy’s health.

The best breeders will also have the puppies health checked at the vets and provide any test or examination results to show that the puppy is healthy. Some will even provide the first month’s insurance free. Many will allow you to keep in touch so they can support you in settling your puppy into their new home.

Taking your time to find the right, responsible breeder can make a huge difference. It sets you and your adorable little puppy up for success!

Common problems for all Frenchies include:

Frenchies have a flat face and short nose so they’re known as a brachycephalic breed. This can cause problems with breathing, known as brachycephalic obstructive airway syndrome. The soft tissue blocks the dog’s airway and makes it tough to breathe properly.

Frenchies have eyes that stand out more on their faces. This can make them vulnerable to eye infections and eye injuries. They’re also prone to corneal ulcers. Another common issue is ‘cherry eye’, causing the eye tissue to stick out of the socket.

It’s common for Frenchies to struggle with joint pain and joint conditions. This includes luxating patellas, a condition where the kneecaps slip out of place.

The Frenchie’s short legs and curly tail are cute, but they can lead to health problems. French Bulldogs often struggle with back pain, slipped discs, and other spine conditions.

Frenchies have those big ‘bat-like’ ears which are adorable to look at. However, because they’re so big and open, germs and debris can get into the ear canal easily. This can cause recurrent ear infections.

A lot of French Bulldogs struggle with allergies, including skin allergies. This can be caused by a wide range of environmental factors as well as by parasites.

Due to the folds in their face, Frenchies can be prone to skin conditions and infections. They commonly suffer from skin fold dermatitis.

Due to their shorter face, Frenchies can struggle with crowded teeth and dental issues.

Merle Frenchies can struggle with all the health complications of a purebred dog, but they can also be prone to additional health conditions.

Choosing a responsible breeder can help to reduce the risks of health problems, although it won’t eliminate the risk altogether.

Genetic testing can help to reduce the breeding of dogs with the specific parts of the gene that lead to these issues. They can also help to reduce the likelihood of a genetic condition. This makes merle French Bulldog puppies healthier over time.

It’s crucial you weigh up the health risks and ensure you are able to afford to pay for veterinary bills throughout your dog’s life. Take your time to make sure this is the right dog breed for you.

Yes, merle French Bulldogs are rare due to their unique colors and patterns. Their rarity and striking appearance can make them highly desired by potential new owners. Some colors are rarer than others.

It’s important to keep in mind that the merle colors aren’t recognized by any Kennel Clubs, so Frenchies with this coloring can’t be registered as an official French Bulldog because they don’t have the official colors to meet the breed standard. Rare Frenchies tend to cost more and can be harder to find.

What is the rarest color French Bulldog?