Both the mini and standard-sized Frenchie look like a smaller version of the English Bulldog, except they have those trademark big pointy ears.

They were originally bred from the toy bulldog in the 1850s, and the breed was first officially recognised by The Kennel Club (KC) in 1906.

So, what are the differences between the mini Frenchie and the traditional French Bulldog?

What is a Mini French Bulldog?

You might also hear them referred to as a ‘micro’, ‘teacup’ or ‘miniature’ French Bulldog, but all of these terms mean the same thing: a smaller version of the Frenchie.

It’s important to note here that the mini or teacup French Bulldog isn’t an official breed and isn’t recognised by the Kennel Club. However, they are growing in popularity as many people feel they are cuter and easier to take care of than the larger Frenchies.

All sizes of French Bulldogs can be prone to health issues, but teacup Frenchies can be more predisposed to health problems (we’ll take a closer look at that later). Health issues may vary depending on the method used to breed the mini French bulldog. 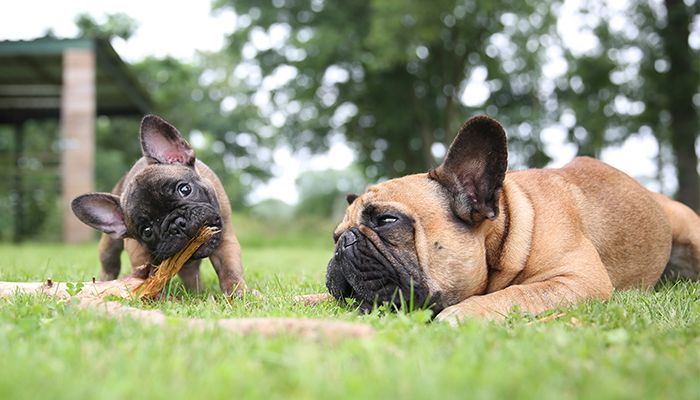 French Bulldogs are part of the non-sporting group rather than the toy group of the kennel club. The traditional Frenchie measures between 11 and 13 inches tall at the shoulder.

Mini French Bulldogs will be shorter than this, although exact measurements will vary depending on the method used to breed them. You can expect them to be under 11 inches tall.

Traditional French Bulldogs weigh under 28 pounds. A mini Frenchie will often weigh under 25 pounds, but again, this varies depending on the method used to breed the dog.

When it comes to appearance, traditional Frenchies have a smooth, short coat. They have large ‘bat-like’ ears and a large, heavy head in comparison with their body. Their snout is short with lots of wrinkles.

Due to their short snout and the shape of their head, they’re known as a brachycephalic breed. They come in a range of colour combinations and with various markings.

In comparison, the mini Frenchie’s appearance will depend on the method used to breed it. If the puppy is bred from runts, it will typically look very similar to the French Bulldog, except smaller!

If the puppy has dwarfism, the head will be larger in comparison to the body, the hips will be narrower, and the legs may be shorter. If the dog is mixed with another dog breed, it may have a variety of characteristics of either breed.

Many mini Frenchies have the traditional short coat, but it can be more tough and tight than the regular-sized Frenchie.

The French Bulldog is a very friendly, adaptable breed. They tend to get on well with other dogs and with people, making them a great family member. They’re typically good around small children as they’re such an affectionate dog.

They’re playful, love to have fun, and will get involved in most activities you introduce them to which makes them excellent companion dogs. Frenchies are loyal and loving little dogs, which is part of the reason they are such popular dogs.

Due to the flat shape of their face, French Bulldogs can be prone to breathing problems. Brachycephalic breeds can struggle with brachycephalic syndrome, which is caused by excessive soft tissue within the upper airways of the dog.

The soft tissue blocks the airways of the dog, stopping them from breathing properly. These respiratory issues tend to be worse during hot weather and can make anaesthetic risky.

Frenchies can also be particularly prone to health conditions including eye issues, ear infections, skin conditions, and allergies. The breed can also be prone to joint issues, including hip dysplasia and elbow dysplasia (the joint not sitting properly in its socket).

Getting a Frenchie from a responsible breeder reduces the risk of these issues. Reputable breeders should do genetic testing to prevent these issues and should ensure the puppies have full health checks by a vet before going to their new home. A healthy Frenchie who receives good care can live for up to 12 years.

Mini Frenchies can struggle with the same health issues as traditional French Bulldogs. However, due to their smaller size, they can also struggle with additional health problems, including:

An important thing to keep in mind is that potential health issues will vary depending on how the dog is bred. If the mini Frenchie is mixed with another breed, it could potentially be healthier. Alternatively, it could take on health issues of the other breed.

If the dog is bred from runts, health issues may be increased. If the mini Frenchie has dwarfism, this introduces a whole range of other health issues because (as we mentioned earlier) it’s a skeletal disorder.

In theory, smaller breeds tend to live longer. Therefore, a mini Frenchie could live up to 14 years old. However, their life expectancy depends on the other health issues we’ve discussed.

Although they’re small, Frenchies are active, intelligent dogs and they need a lot of stimulation. They don’t need a lot of exercise compared to many other breeds: a short to medium walk each day is suitable.

You can also keep them stimulated by playing games outdoors, getting them involved in canine sports (like agility), or playing mentally stimulating games indoors.

It’s crucial they don’t exercise too much outdoors in hot weather, due to their potential breathing issues. Therefore, they’re not the best dogs to own if you prefer long walks in the summer. Walks in the late evening during summer are better suited to both the Frenchie and mini Frenchie.

Since they’re smaller, mini Frenchies won’t need as much exercise but they’ll still need short daily walks and lots of mental stimulation to keep them healthy and happy. Their energy levels will vary depending on their genetics.

Frenchies shed but it’s fairly minimal. Since their coat is so short, it’s quite low maintenance. A brush once a week will keep their coat and skin healthy, as well as helping to reduce any shedding around the home.

Their eyes, ears, and skin folds should be cleaned regularly. It’s important the skin folds are kept dry and clean. Their nails should also be trimmed regularly.

Mini French Bulldogs will require a similar amount of grooming, although it may take less time since they’re smaller!

Depending on the texture of their coat, their brushing needs should be similar. If they’re crossed with another breed, they may need more frequent brushing depending on their genetics.

French Bulldogs have a strong personality and can be quite stubborn at times, so training as early as possible is recommended. They tend to want to please their owners so training is quite easy as long as it’s consistent and high-value treats are used.

If you get a Frenchie as a puppy, attending puppy classes is recommended as this can help you get a handle on the basics and help to socialize your puppy. This is especially useful if you don’t have a lot of experience training dogs.

Mini French Bulldogs can be much harder to train. They can be willful, difficult to toilet train due to their small size and small bladders, and can struggle with behaviour issues. This makes it even more important to be consistent with training as early as possible.

Average prices will vary depending on where you buy your puppy and the economic climate at the time.

Currently, a French Bulldog puppy can cost between $1000 and $3000, sometimes even more. A mini Frenchie can cost even more than this, as breeders tend to raise prices for ‘teacup’ or ‘miniature’ dogs.

If you adopt a puppy or adult dog from a rescue centre, costs will be much lower and the dog will typically be health checked and have some basic training. Plus, you’re giving a homeless dog a loving, forever home

Remember that this is only the price to get the dog initially. You also need to consider other costs such as the best dog food for french bulldogs (and puppies), beds, toys, grooming prices, and so on.

Since the Frenchie and in particular, the mini Frenchie can have a lot of health issues, you need to factor in vet costs over the years to address health issues. It’s important you’re able to keep your dog as healthy and happy as possible.

How Are Mini French Bulldogs Bred?

There are three main ways breeders create a smaller version of the French Bulldog breed, which are explained in further detail below.

Some breeders will breed a standard Frenchie with another smaller dog breed, to create the smaller size. Commonly used breeds include Toy Poodles, Yorkshire Terriers, and Chihuahuas. However, this is technically a mixed breed rather than a pure French Bulldog.

Being a mixed breed can mean the puppy is healthier because the gene pool is widened. This isn’t guaranteed, however, because it depends on the health of the other breed the dog is mixed with among other factors. Keep in mind it’s impossible to tell which traits of the two parents the puppy will inherit.

Some French Bulldogs are born with a form of dwarfism. This is a skeletal condition that causes them to be smaller with large heads. Some breeders will breed dogs with this condition so that the gene is inherited by the puppies, to create a line of mini French Bulldogs.

Although dogs with dwarfism look undeniably cute, this is a skeletal disorder. This means it causes the dog chronic pain and can cause a range of other health issues. So, this method of breeding is not recommended.

Runts of the Litter

The runt of the litter refers to the smallest puppy in a litter. Breeders sometimes breed two runts together to maintain that smaller size.

Although this method can be successful, it’s crucial to check the health of the mother and father to ensure the puppy will be healthy. One of the main reasons runts are often in poor health is because they can’t get enough access to their mother’s milk, due to their larger littermates pushing them out of the way. This can lead to issues with their immune system developing properly.

It’s also important to double-check that the breeder is reputable, and isn’t passing a runt of the litter off as a mini Frenchie which may then have health issues later.

Always do your research on the breeder and ask to see the puppy’s mother and father, as well as the litter mates.

Both French Bulldogs and mini French Bulldogs have lots of wonderful qualities that can make them a great pet. However, they can also have a lot of health issues so it’s really important that you do your research and make an informed decision.

Make sure you’re equipped to deal with the financial and emotional needs of a dog that may have a fair amount of health issues.

If you’re unsure if this breed is a good fit for you, don’t worry there are lots of other amazing small breeds that could be the ideal pup for your lifestyle.

Whichever breed you get, be sure to find a reputable breeder or rescue centre to ensure the dog you choose has as few health issues as possible. With the right breed for you, you can enjoy life with a loyal companion who will fill your life with joy!