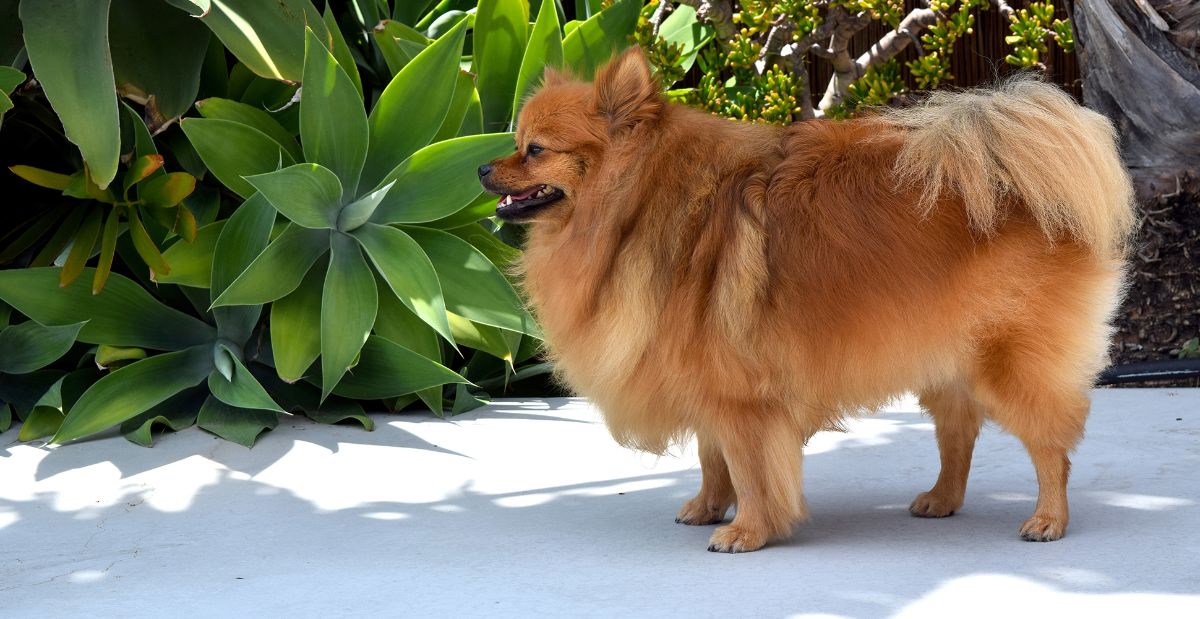 The adorable puffball known as the Pomeranian is a spirited little dog with personality to spare. This extremely popular dog breed is known by several different handles including Zwergspitz, Dwarf Spitz, or Loulou.

The Pomeranian is a descendant of the Spitz group of dogs, standing amongst such noble members as the Samoyed, Alaskan Malamute, and Norwegian Elkhound. The name Pomeranian, or Pom as breed aficionados affectionately refer to them, is taken from the region where the breed was developed, an area in Germany called Pomerania.

The breed gained immense popularity during the reign of Queen Victoria. Queen Victoria shared her kingdom with many fine specimens of the breed and was the first to permit Pomeranians to be shown in conformation events in the country.

Pomeranians are adorable to behold, but they are far more than simply a cute little lap dog. This dog breed is quite intelligent and is in possession of a fiery attitude that is quite endearing. The typical Pomeranian is very independent by nature and has a strong stubborn streak, making them somewhat challenging to train.

The Pomeranian is a curious little fellow, approaching new situations with bravery and confidence. A breed that truly has no concept of its size, its boldness is part of this breed’s charm.

In general, the Pomeranian is well suited to living in homes with multiple pets. The breed can enjoy the company of children, so long as the kids are well-behaved.

An extremely vocal breed, the Pomeranian’s bark is surprisingly quite sharp and loud. The breed will alert bark at the presence of unusual activity around the home, making them well suited to work as a watchman. However, the Pomeranian often enjoys barking a little too much, and thus, should be taught a “no bark” command to ensure peace with the neighbours.

The Pomeranian is a very good choice for seniors as well as for families on the go as they enjoy their own company and can be left alone. They are also well-suited to apartment living since they have low activity requirements.

Pomeranians can learn basic commands with ease but need sufficient motivation to learn. Consistency and enforced boundaries are an important foundation to put in place for this breed.

Though a small dog breed, the Pomeranian has a surprising amount of energy. A daily stroll is sufficient for the Pom to remain physically and mentally content.

The Pom’s diminutive size does not prohibit it from participating in popular dog performance sports. The breed excels at such disciplines as tracking, agility, flyball, and even obedience. 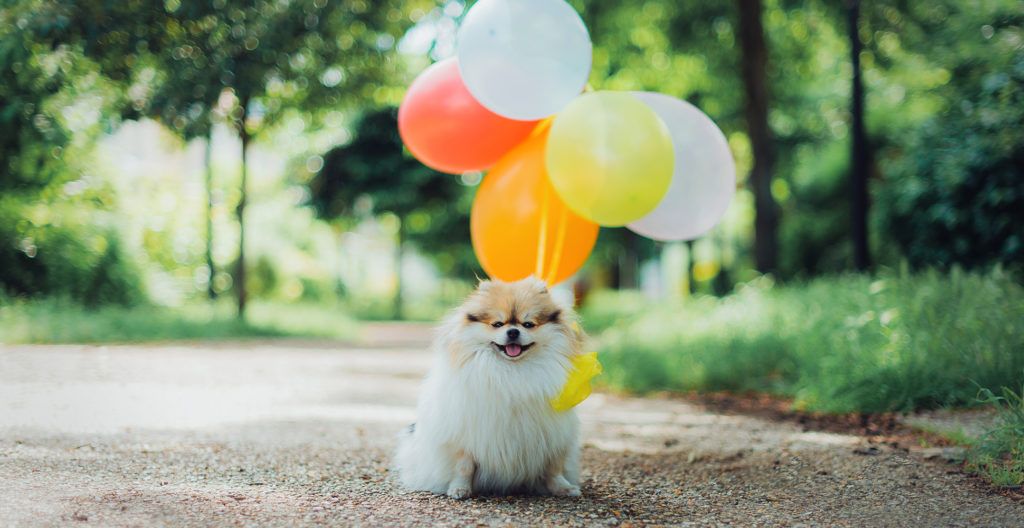 The Pomeranian hails from a small region in Germany known as Pomerania. A member of the Spitz family, the Pom is the smallest member of this distinctive group which originated in the Arctic. It is believed that the Pomeranian was selectively bred from larger Spitz breeds to the little cutie we know and love today.

The Pomeranian carries itself with a noble dignity befitting royalty. A favourite dog breed of Queen Victoria, this feisty little lap dog has enjoyed sharing its home with such important figures as Marie Antoinette, Emile Zola, and Wolfgang Amadeus Mozart.

Queen Victoria was such a proponent of the breed that she paved the way for them to be shown at Crufts when in 1891, she allowed six Pomeranians she bred to be shown. It is believed that Queen Victoria played an important role in helping the breed achieve its smaller size.

The Pomeranian’s increase in popularity led to a move from England to America in the year 1888. The breed was first officially accepted by the American Kennel Club in 1900. The breed quickly soared to become one of the most cherished dog breeds in the country, a title the Pomeranian still holds today. 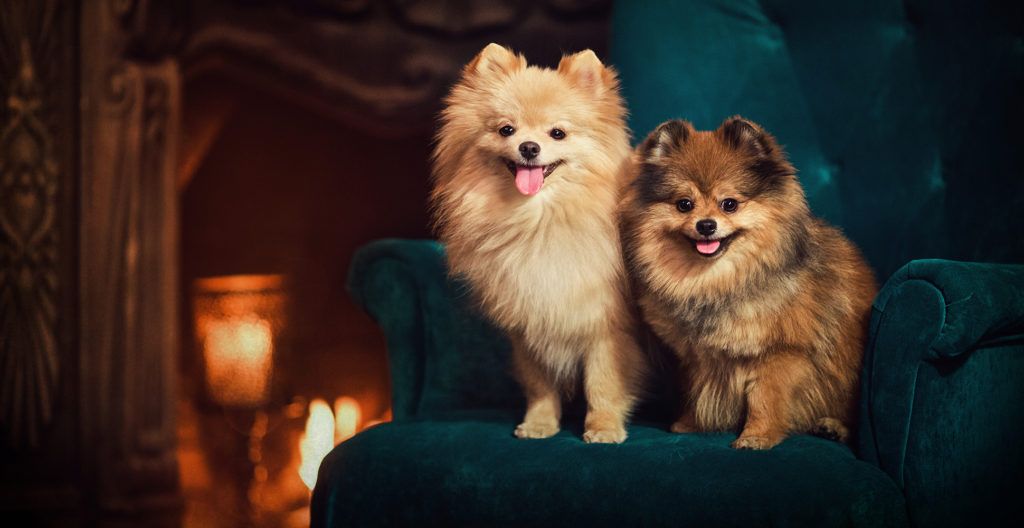 Pomeranians typically stand between 6” to 7” at the shoulder when fully mature. Their adult weight can range from 3 to 7 pounds.

The Pomeranian is considered to be a toy breed. Toy breeds must be handled with a delicate hand to prevent any injury due to the fragility of their bones. 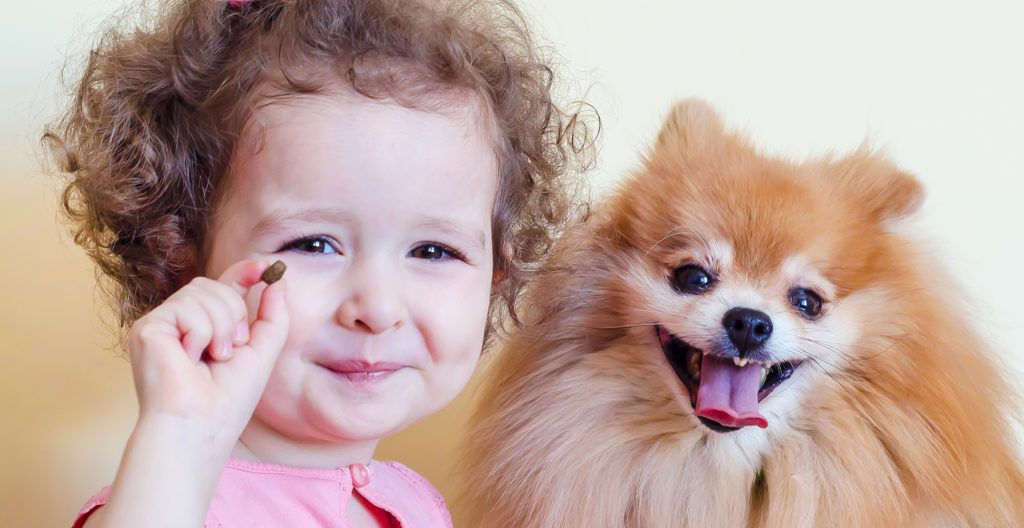 The Pomeranian is a very social dog. A breed known for its intelligence, the Pom is a lively creature that delights at making new friends. The Pomeranian also typically gets along well with other animals though all introductions should occur in a neutral setting to ensure successful integration.

A breed characterized by its curiosity, the Pomeranian remains alert to its surroundings and will alert bark at the hint of any unusual activity. However, Pomeranians can be extremely vocal and must be taught to cease barking when asked to do so.

Because the Pomeranian is a toy breed, children should be taught to handle it with great care. Dropping the dog could lead to permanent injury. The Pomeranian can get along with children, but all interactions should be carefully supervised.

Though Pomeranians do enjoy the company of other family pets, they don’t realize that they are a toy breed and will often attempt to challenge dogs much larger than they are. This behaviour should not be tolerated.

The Pomeranian will thrive in nearly any living condition including apartments. They are well-suited to life with seniors and first-time owners. A dog breed that enjoys its own company, the Pomeranian does not mind spending time on its own.

The Pomeranian’s double coat allows it to enjoy time outdoors in cold weather conditions, but it does not tolerate heat well. 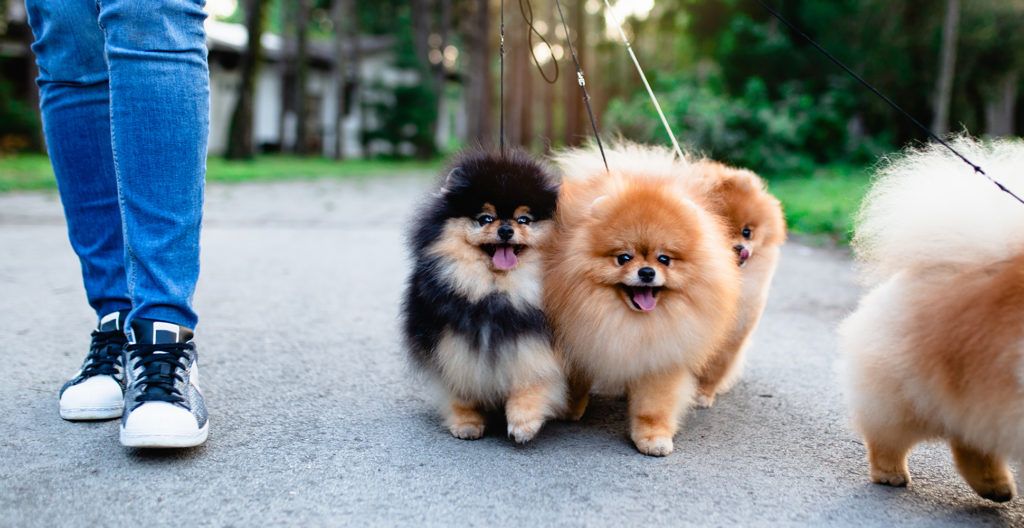 Pomeranians most often enjoy very good health. However, as with all dog breeds, there are certain genetic ailments they can be predisposed to. All breeding dogs should be thoroughly screened prior to mating to help prevent the spread of any inherited disease. The most commonly seen genetic health problems in Pomeranians include allergies, epilepsy, eye problems, hip dysplasia, Legg-Calves Perthe disease, patellar luxation, collapsed trachea, and dental issues.

One of the hallmarks of the breed is its lustrous, plush coat. Comprised of two layers, the Pomeranian’s coat is made up of a soft, woolly undercoat and a longer topcoat with a characteristic sheen. Another defining component of the Pomeranian’s appearance is its plume-like tail which closely resembles a fan.

A breed that sheds only moderately, the Pomeranian will blow its coat at least once yearly. To keep the coat in good condition, experts agree that the Pomeranian should be brushed several times during the week and more frequently when blowing coat. Since the Pom’s coat can mat, be certain to brush right to the skin. To keep the Pom looking tidy, the breed can be trimmed along the face, ears, feet, and bum.

The Pomeranian can be bathed as often as suits the owner, but care should be taken to only use a very mild dog shampoo and to follow up each bath with conditioner before blow drying the dog. Baby powder sprinkled throughout the coat can also help eliminate any unpleasant odours in the coat.

Nails should be trimmed at least once per month. Regular ear cleaning and dental care are also important components of any health and wellness program for the Pomeranian.

The Pomeranian is very prone to gaining weight. To ensure this does not happen, the breed should be exercised daily. Care should also be taken to monitor the dog’s food intake and to make adjustments as needed to promote an optimal weight.

The Pomeranian is not known to be a drooler. 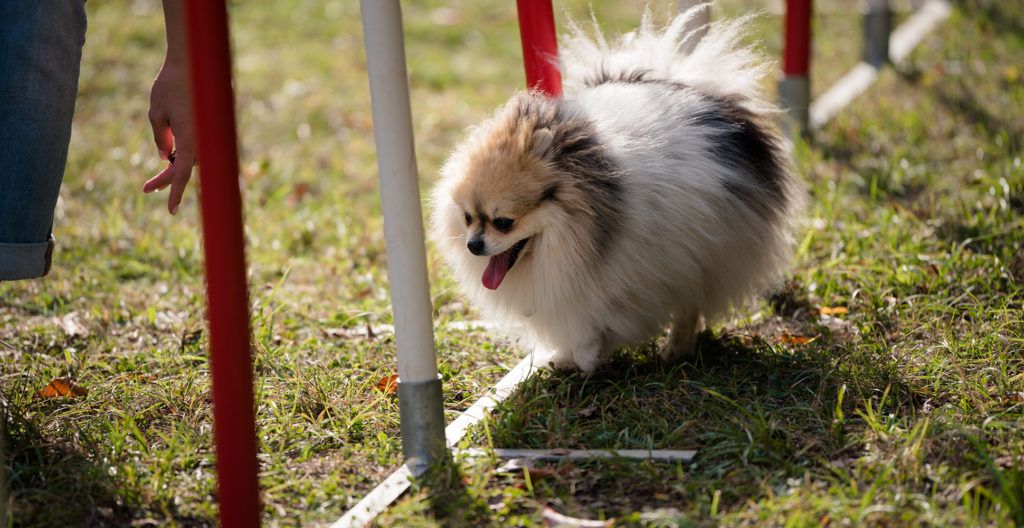 Pomeranians are intelligent but are both spirited and stubborn, making training them quite challenging. To achieve effective results, owners must be prepared to be patient. The average Pomeranian can learn the basic obedience commands in approximately two months’ time with consistent effort.

The Pomeranian should be taught not to jump on and off furniture since toy breeds can easily break bones from any impact with the floor. The breed does excel at many dog performance sports and can easily take well to such events as agility, obedience, and Rally. They are also well-suited to work as therapy dogs.

The Pomeranian is not a particularly mouthy dog; however, all puppies should be taught to use their mouths appropriately as an important safety measure. This can be accomplished by redirecting the dog’s mouth to a toy, ball, or bone when the dog attempts to nip or bite.

A dog breed with a very low prey drive, the Pom is not prone to wandering. Still, a securely fenced yard is a very good idea for this breed.

Pomeranians are a very vocal breed and must be taught to cease making noise when asked to do so. 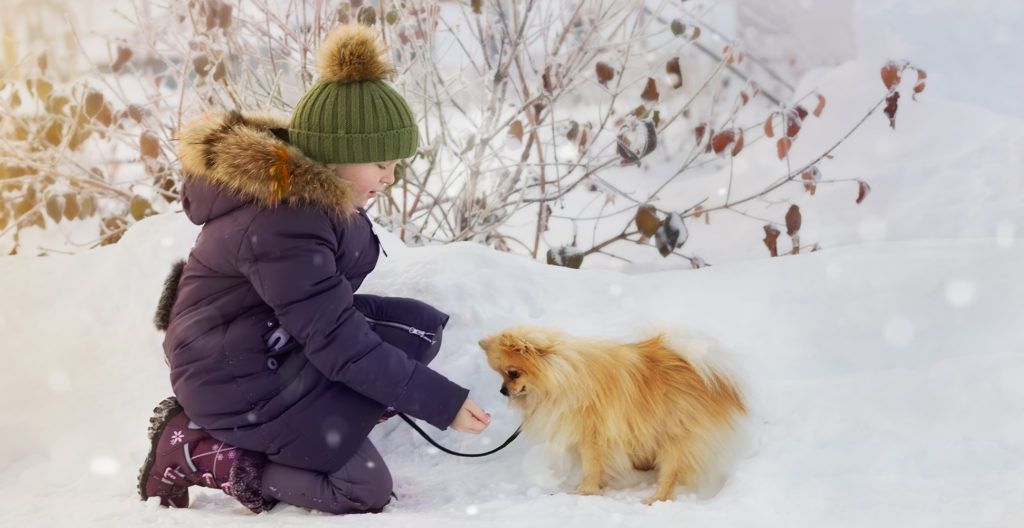 Pomeranians are a breed with energy to spare; however, their activity requirements are easily satisfied with a simple walk of approximately 20 minutes each day.

The Pomeranian is both hardy and feisty and does enjoy lengthy bouts of activity. However, too much exercise can be harmful, so owners must establish safe boundaries. The breed does not do well in heat, so all activity should take place during the most moderate temperatures of the day.

Pomeranians are prone to boredom, so care must be taken to provide them with toys and bones to keep their minds productively engaged. Poms also quite enjoy learning new tricks and will happily trot out their repertoire to entertain guests at every opportunity.

This breed is highly playful and looks forward to opportunities to be involved in active pursuits with its family. 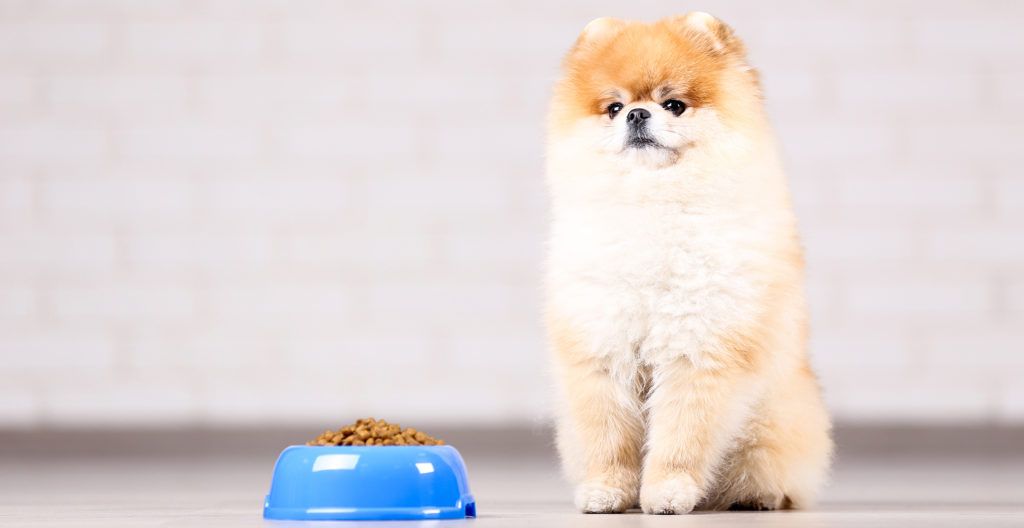 To ensure the Pomeranian’s dietary needs are met, it is always a good plan to consult the advice of a veterinarian. In general, Pomeranians do well on a high-quality diet that is properly balanced and appropriate to the dog’s age, activity level, and unique health conditions.

Puppies should eat a puppy food that has been specifically formulated to address the needs of their developing bodies. In like fashion, adult dogs should eat an adult food that is suited to their unique requirements.

To establish the correct serving size, the bag of food will offer suggestions based on weight. This is a helpful starting point but should be adjusted to reflect the activity level of the dog. The Pom’s appetite and weight can serve as helpful guides in this process. 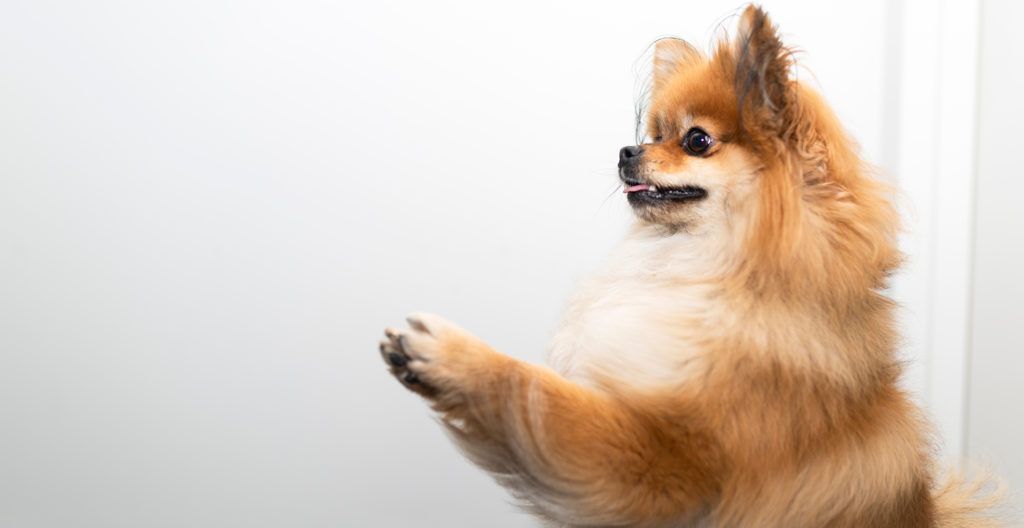 For more information about Pomeranians for adoption near you, we recommend the following comprehensive resource: