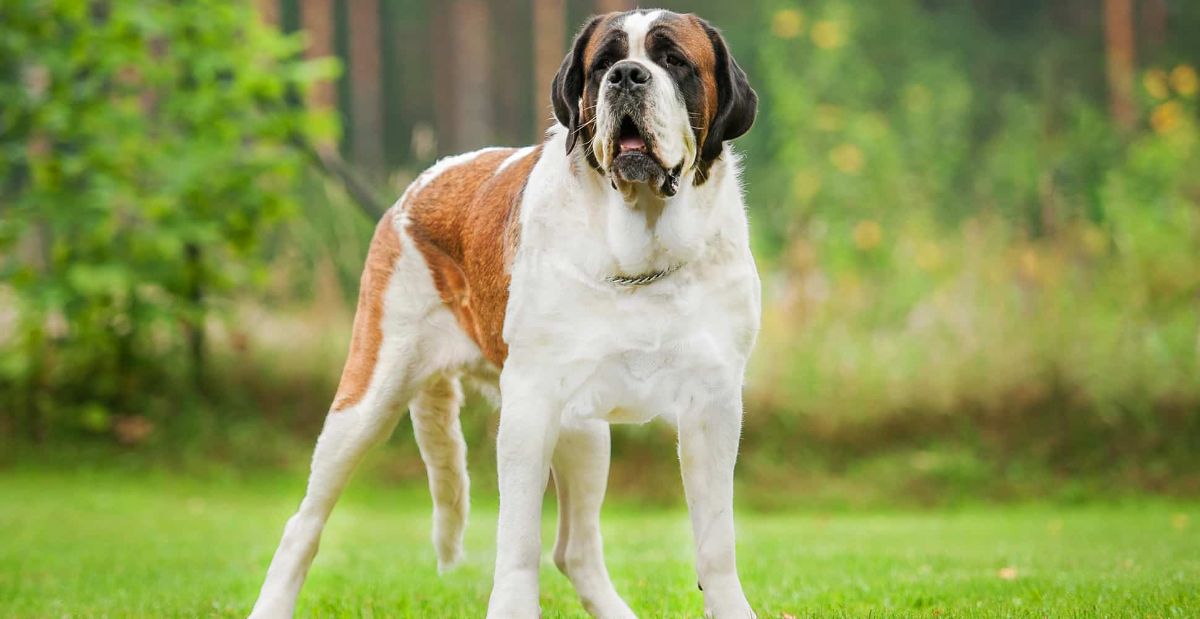 About The Saint Bernard 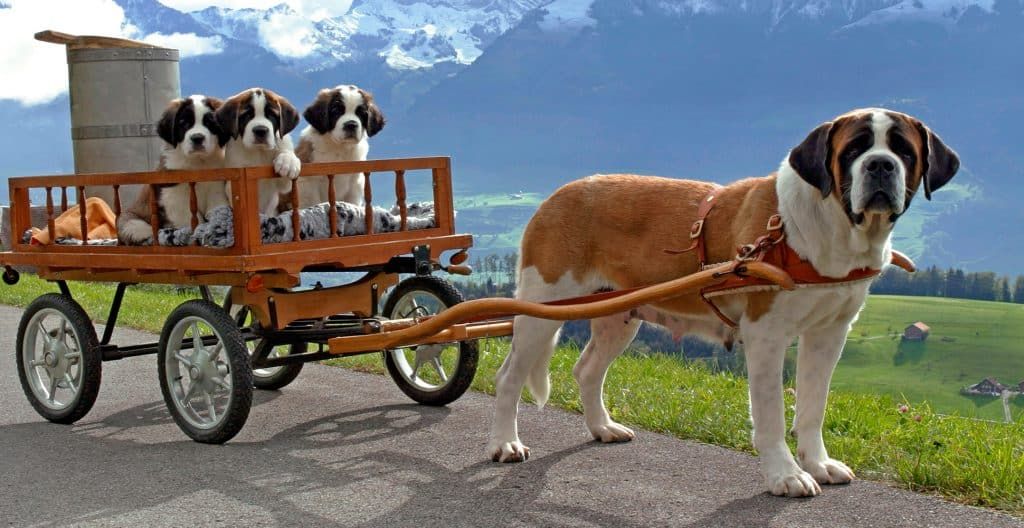 The stately Saint Bernard has been prominently featured in many TV and print ads for its heroic rescue efforts. A breed whose purpose included cold weather rescue attempts in its native Swiss Alps, the Saint Bernard is a giant breed working dog.

Known for its soft, gentle disposition, the Saint Bernard is a dog of high intellect and superb temperament. A dog of immense proportions, the Saint has a rich muscular frame and the stamina to fuel the work it was designed to do. The Saint Bernard comes in two coat varieties: short and long-haired with a preference being shown for the short-haired version of the breed amongst the monks believed to have developed this beloved dog type.

The Saint Bernard is extremely social and craves the companionship of its people. Though a giant breed dog, the Saint Bernard should dwell indoors with its family. A dog known for its quiet ways, this pooch is not a known barker.

Unfortunately, Saint Bernards do tend to carry a whirlwind of mess along with them. They are heavy droolers and shedders. In addition to this, their thick double coat attracts dirt and mud which is released into the home environment, meaning owners must be prepared to do a lot of additional cleaning.

A breed that is known for its love of children, the Saint Bernard is both laidback and patient. This dog type will contentedly cuddle with children; however, it is not particularly playful by nature. The Saint Bernard is not recommended for homes with young children due its large size.

Surprisingly, the Saint Bernard has low activity requirements. This is not a dog breed that excels in hot weather conditions nor does it favour rigorous exercise such as running. Saint Bernards can easily succumb to heat exhaustion, and thus, exercise in the heat is discouraged.

A giant-sized breed known for its quiet and gentle ways, the Saint Bernard is not suited to apartment life by virtue of its stature and girth alone. This type of dog excels when given a securely fenced yard in which to expend its stores of energy.

Though a highly intelligent breed, Saint Bernards require a longer time to reach mental maturity, meaning this giant pooch will experience a longer puppyhood than the typical average.

Saint Bernard traces it roots to Switzerland, the homeland of several other much beloved dog breeds including the Bernese Mountain Dog and the Entlebucher. It is believed that the breed came to inception through judicious crossbreeding between Mastiffs and dogs transported to the region with the Roman Army during the occupation of Augustus. In 1000 A.D., all dogs in the region were categorized into two different groups: the Talhund (Valley Dog) or the Bauernhund (Farm Dog).

Through the Alps is an area known as the Saint Bernard Pass that is known for its dangerous travelling conditions. The pass sits 8,000 feet above sea level and is only traversable from July through September each year. This travel route was named for Archdeacon Bernard de Menthon who established a hospice on the premises in 962 A.D. The purpose of the hospice was to aid injured travellers attempting to move across the pass.

When this dog type was first incorporated into the work of the hospice is unknown; however, artwork exists which shows Saint Bernard-like dogs engaged in the work in the region as early as 1695. Records from the monastery indicate the presence of the breed in 1703.

Though originally employed as guardians of the premises, the dogs were often brought along to hunt for travellers who had lost their way. It may have been that the dogs were included on the journey to provide protection, but during their searches, the Saint Bernard’s penchant for rescue was discovered. Because the monastery was in a remote and cold location, the breed was then further developed to bear a coat that could provide protection against harsh weather conditions.

To help provide a more suitable coat, the monks began breeding their Saint Bernard prototypes to Newfoundland dogs in 1830. Unfortunately, this plan was not successful, resulting in long-haired puppies who suffered from water pellets forming ice in their coats, making them less suited to the work they were required to do.

During the 19th century, it has been recorded that this noble breed was responsible for saving the lives of over 2,000 travellers. To this point in history, this dog still did not have a name. In England, a country that imported this dog type to help make improvements to their Mastiffs, the breed was referred to as Sacred Dogs.

In Germany, it was proposed that the breed be named Alpendog after the location where it was developed and worked. Daniel Wilson is credited with the suggestion of the name Saint Bernard, an idea he put forth in 1833.

Saint Bernards are popular and beloved family companions today. Many of them have earned recognition on the big screen with Beethoven a particular fan favourite film of many. Today, the Saint Bernard Hospice still operates in Switzerland with many of this heroic breed still employed there as working dogs. 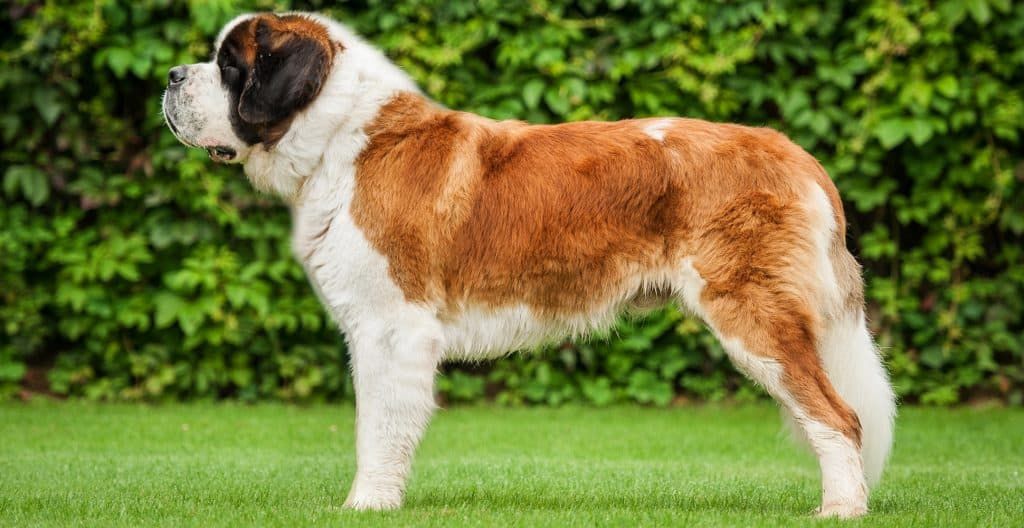 Since the Saint Bernard is a giant breed dog, potential owners must be prepared for the additional costs associated with owning a breed of this size. Food costs will be substantially higher though feeding a high-quality, nutritionally balanced diet will allow for more value since the dog will need to eat less to feel satisfied. Other items with higher price tags for large breed dogs include such things as beds, crates, collars, and medications. 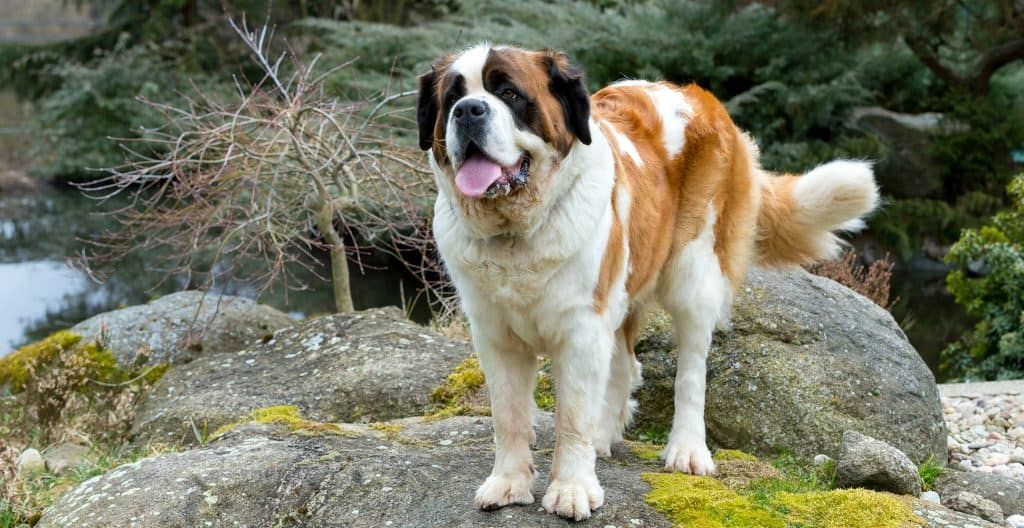 The Saint Bernard is a social creature with a warm and loving temperament. A breed that is both happy and friendly, the Saint Bernard’s steady personality makes it a friend to all. The Saint particularly enjoys the company of children and is exceptionally gentle and patient with them.

Saint Bernards are intelligent dogs that are relatively easy to train. However, they can be prone to stubbornness.

A true lover of human companionship, the Saint Bernard will not thrive living outside or away from its family. This dog breed does not enjoy time spent alone and can become destructive if not given adequate social time daily.

Though Saint Bernards are excellent with children, all interactions between kids and the dog should be carefully supervised. Saints are extremely tolerant; however, they are quite large, potentially knocking over toddlers with the simple wag of a tail. For this reason, the breed is not recommended for families with young children.

Saint Bernards enjoy the company of other pets and are quite content to cohabit with other animal siblings. To ensure successful introductions, initial greetings are best reserved for a neutral location to reduce any potential for territorialism.

The Saint Bernard is both loving and affectionate with its family, friends, and even strangers on the street. A breed that is not suited to living in an apartment, the Saint Bernard does best on a property with a secure, fenced yard in which to roam.

Though the Saint Bernard’s coat makes it amenable to outdoor conditions in the winter, this dog breed cannot tolerate heat. 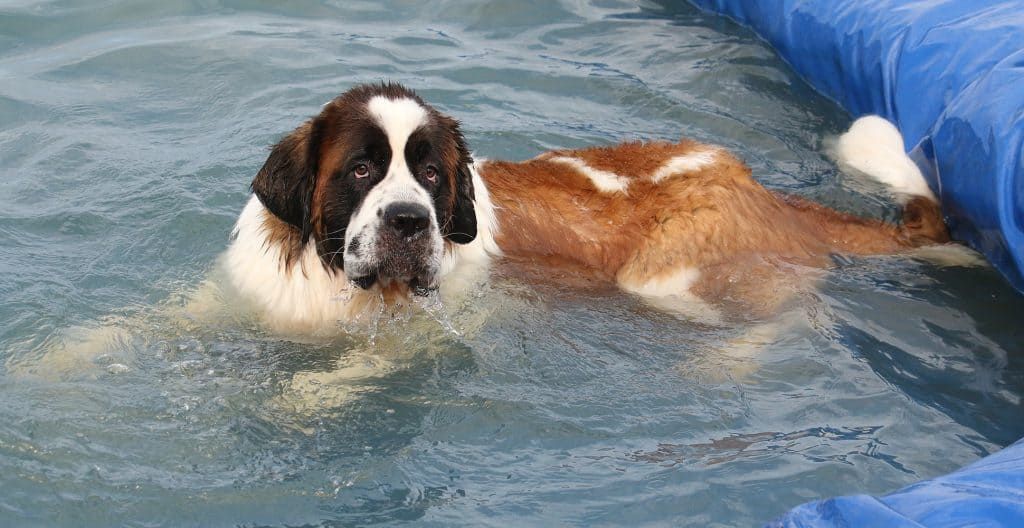 In general, the Saint Bernard is a dog breed known to enjoy excellent health though its life span is quite abbreviated at only 8-10 years. As with any breed, there are a number of health conditions the Saint can be predisposed to. Reputable breeders will pre-screen all potential breeding pairs to ensure genetic illness is not passed from one generation to the next. Among the issues which can plague Saint Bernards are hip and elbow dysplasia, entropion, epilepsy, cataracts, allergies, and gastric dilatation-volvulus (bloat).

To care for the Saint Bernard’s thick coat, it is necessary to brush it on a weekly basis, more frequently if possible. This dog breed will blow coat twice yearly. During this time, daily brushing is required to reduce the amount of shed hair into the home environment.

Bathing should be done on an as needed basis. Nail trims should be undertaken at least twice per month. Regular ear and dental care will also help keep the Saint in tip top shape.

The Saint Bernard loves to eat, and as a result, weight gain can be a concern. It is best to carefully measure all meals and treats and to monitor the dog’s weight on a consistent basis.

The Saint Bernard both sheds and drools profusely. 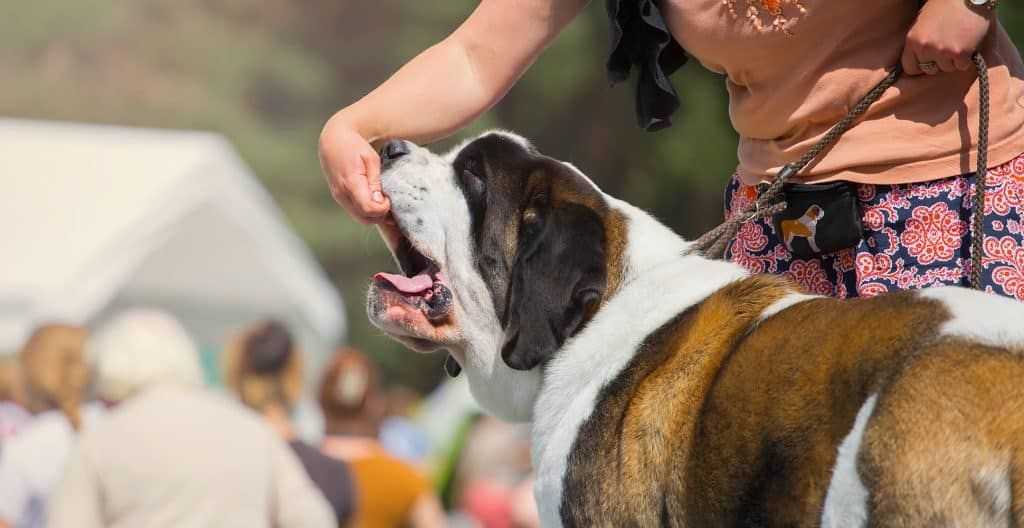 The Saint Bernard is not known to be a mouthy breed; however, due to its sheer size, it is important to redirect the dog towards a toy or bone any time its teeth connect with skin. Through this practice, the dog will come to learn appropriateness.

The Saint Bernard will alert bark on occasion but is not known to be a barker. The breed lacks prey drive and is unlikely to wander off if given occasion to do so. 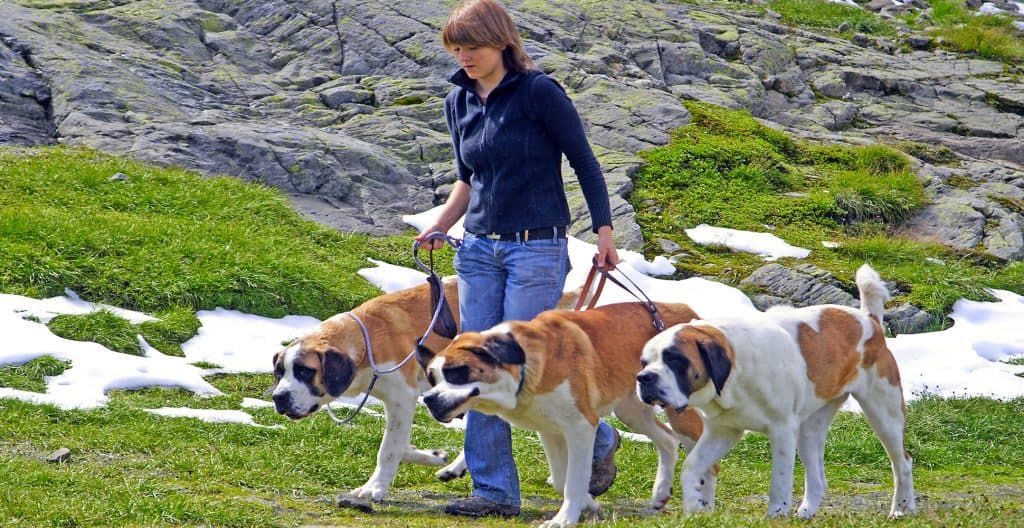 Saint Bernard has relatively low activity requirements for a giant breed. A walk or play session of approximately 30 minutes in length is sufficient to keep this dog mentally and physically satisfied. The Saint is particularly amenable to travelling with its owner to enjoy hiking or backpacking and excels at such dog sports as carting and drafting.

Saint Bernard puppies should have their exercise limited until they reach full maturity. It is also important to ensure the puppy maintains a healthy weight to avoid future hip problems.

Saint Bernards can easily become overheated, leading to issues such as heat exhaustion and heat stroke. To avoid this, never take a Saint Bernard for a walk at the hottest portion of the day and always maintain a plentiful supply of water.

The Saint Bernard is an amiable fellow, but it is not a particularly playful breed. 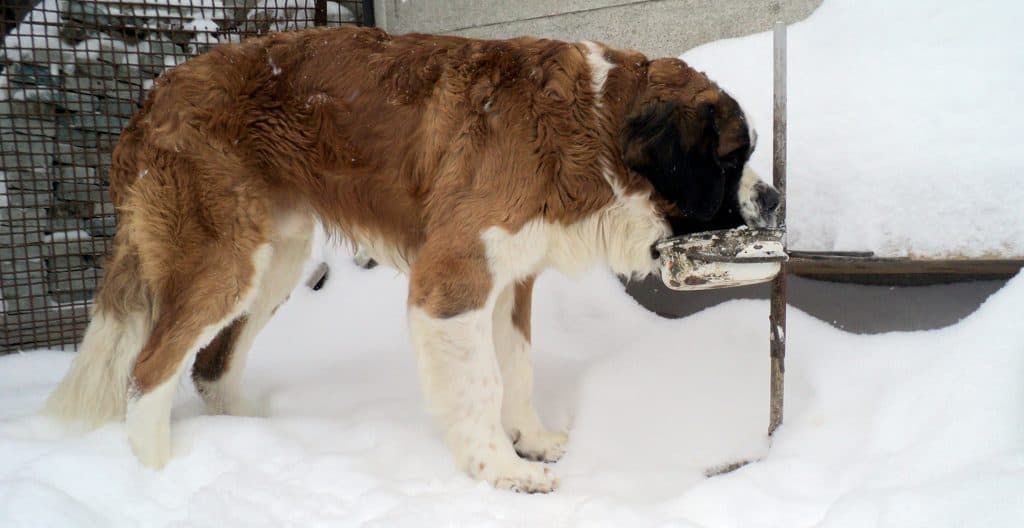 To source the best quality diet for a Saint Bernard, it is an excellent idea to schedule a consultation with a veterinarian. This breed does best on a food comprised of lean proteins and that is nutritionally balanced to support optimal health.

Giant breed puppies like Saint Bernards should always be fed a high-quality puppy food specifically designed to address the needs of large breed puppies. Regular puppy food should be avoided. Adults should be fed a diet that is appropriate to their age, activity level, and health condition.

As a general rule of thumb, serving sizes as outlined in the bag of food is an excellent starting point. Meals can be adjusted to suit the activity level of the dog. 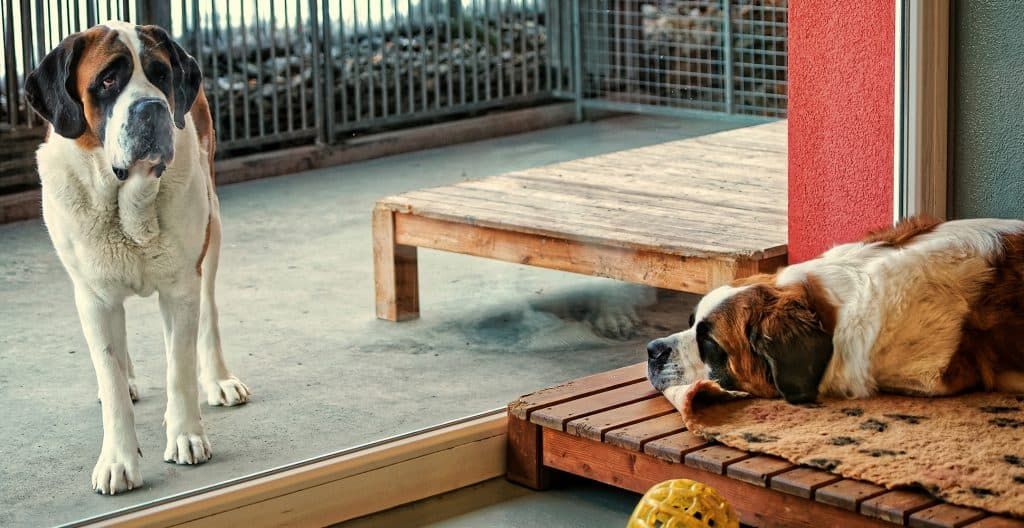 If you are looking for a Saint Bernard for adoption near you, we recommend the following important resources: