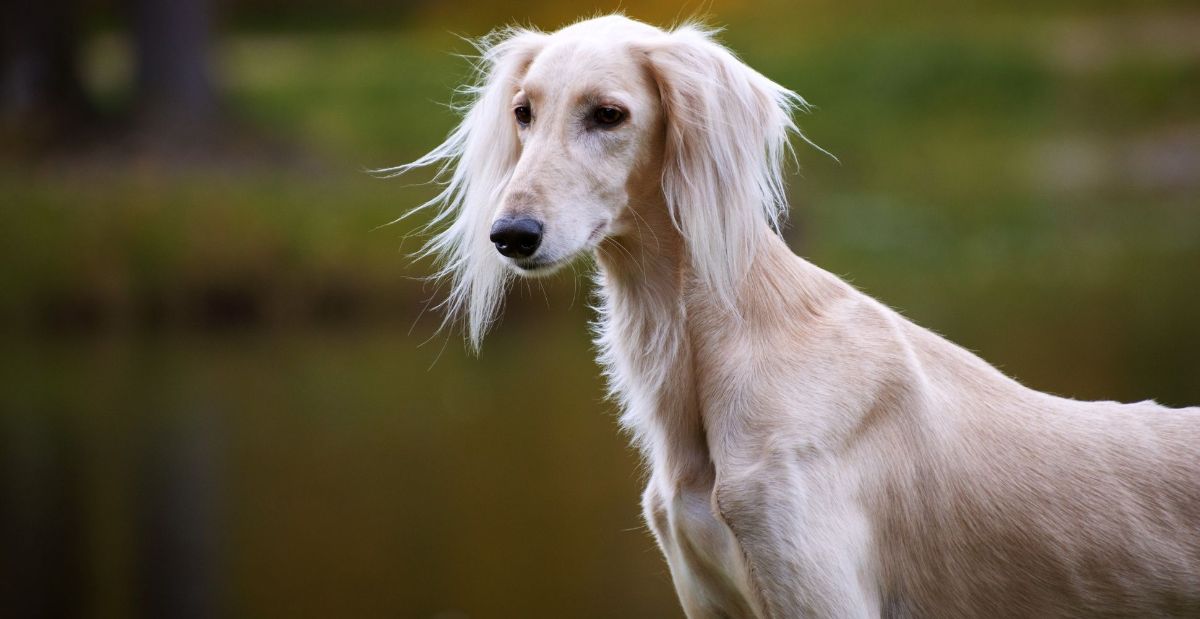 The graceful Saluki is considered to be one of the world’s most ancient dog breeds. A dog type that traces its roots to Egypt, the ancient Egyptians believed that the distinctive looking Saluki was a present to them from Allah. The breed is well-renowned for its impressive speeds, lithe body, and immense loyalty to those it loves most.

A dog breed with exceptionally low grooming requirements, the Saluki is an excellent choice for families looking for a low maintenance dog. The breed is a typical hound, being highly independent and largely uninterested in learning new skills. Because the Saluki is a sighthound, the breed should never be allowed off lead as this dog will chase small game at intensely high speeds, making the dog impossible for an owner to catch when loose.

Because the Saluki is a highly active dog that loves to run, this breed is not suited to apartment living. The ideal living situation for this busy, athletic breed is a home with a fully fenced yard. The breed possesses a very high prey drive and will roam if given opportunity to do so.

Though the entire history of the Saluki is not known, experts assert that this elegant hound is one of the world’s oldest dog breeds. The original developers of the breed often referred to the Saluki as “The Noble.” Among the Saluki’s most prized traits are its natural strength and stamina.

The Saluki is both loyal and affectionate to those it loves most. The breed can be aloof towards strangers, being reserved by nature. However, beneath this innate reticence lies the heart of a true hunter that pulsates with a lively spirit.

A free thinker, the Saluki requires no direction, preferring to follow its natural instincts. A dog known for impressive speeds, the Saluki can run up to 35 miles per hour.

A dog that is naturally attentive and alert, the Saluki will alert bark to the presence of strangers but makes a poor guardian of home and hearth in general. The breed’s shy nature means socialization from an early age to a wide variety of new experiences and people is very important to help the dog become confident and well-adjusted.

The Saluki bonds deeply to its family and does not do well when left alone for long periods of time. Its slim, well-muscled body is covered in a light amount of coat, meaning this dog does not tolerate extreme weather well. The Saluki should live indoors with its family.

Because of its strong prey drive and penchant for chasing things, the Saluki is best suited to life with experienced dog owners.

The sleek-bodied Saluki is the perfect picture of strength and elegance. Believed to one of the world’s oldest dog breeds, recent genetic material links the Saluki to ancient dog types that were descended from the very first dogs. Early artistic renderings show images that are very similar in appearance to the Saluki including artwork from Sumer that is believed to be nearly 10,000 years old.

In ancient Egypt, the Saluki accompanied Pharaohs on their hunts for gazelles and hares. The breed also successfully worked alongside falcons out in the field. Salukis were so revered by their owners that they were often mummified upon their passing. Though Muslims typically regard dogs as unclean, early followers of this religion highly prized the Saluki, believing the breed to have been a present to them from Allah. They bestowed the name El Hor upon the dog, a title that translates to The Noble.

There are several different legends that may tell the tale of how the Saluki gained its name. Some breed enthusiasts purport that the name Saluki is taken from the aged city Saluk found in the country of Yemen. Others believe Saluki is derived from the Syrian city of Seleukia. However, equally as plausible is the theory that Saluki is simply a variant of the common Arabic term that translates to hound.

The Saluki was immensely popular throughout the Middle East with a high concentration of the breed found in such countries as Persia (Iran), Syria, Palestine, Egypt, Arabia, Anatolia, and Mesopotamia. History records the first European Saluki appearance as taking place in Britain in 1840. Following World War I, the breed gained immense popularity in England when many soldiers returned from battle with a Saluki or two to add to the family. 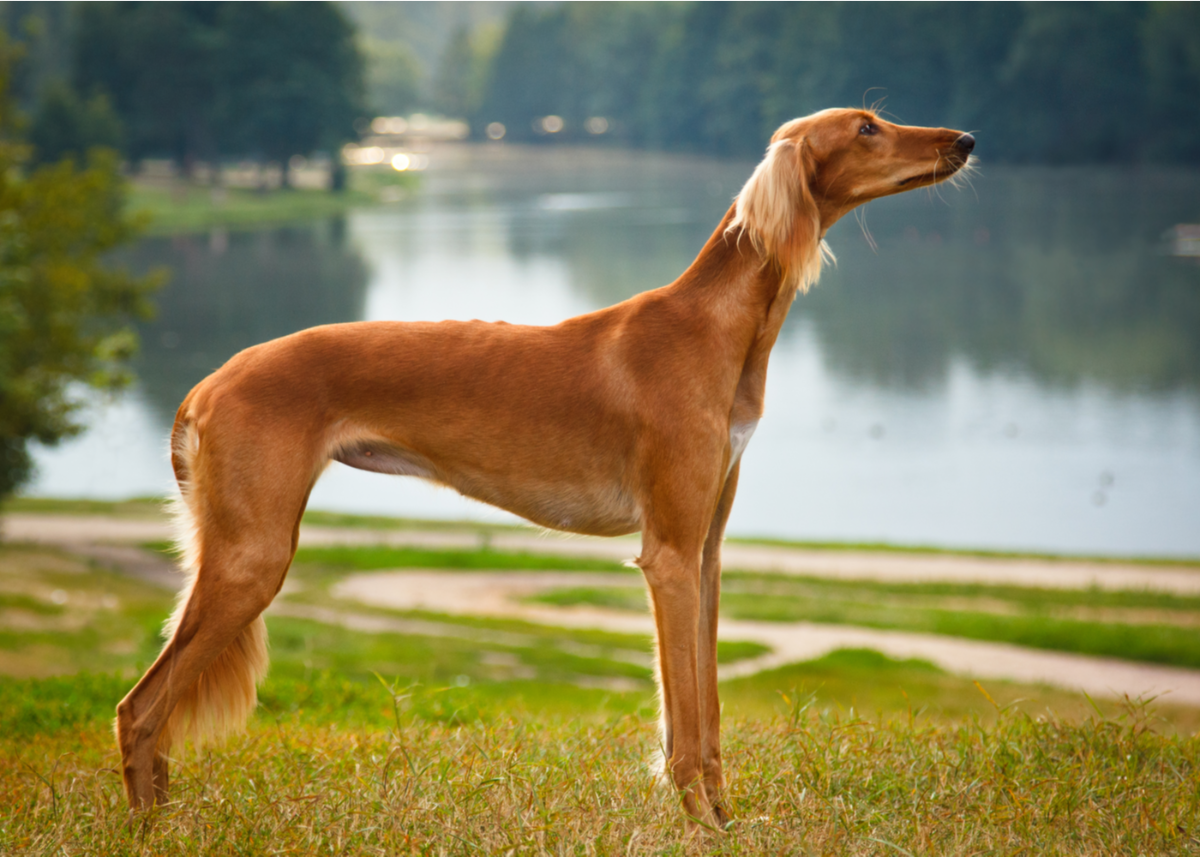 The average adult male Saluki stands from 23 to 28 inches when measured from the shoulder to the ground. By comparison, mature female Salukis are often substantially smaller than their male counterparts with no specific set of measurements indicated for them. The Saluki’s weight range spans from 40 to 65 pounds.

A dog breed with very high activity requirements, owners should be prepared to exercise the Saluki vigorously every day. Weight gain is not typical in this breed should the dog be properly exercised and fed an appropriate diet in the correct portion size.

A medium to large breed dog, the costs associated with owning a Saluki can run higher than dogs of a more standard size. Owners must understand the added expenses they will face with a dog of this build and activity level. 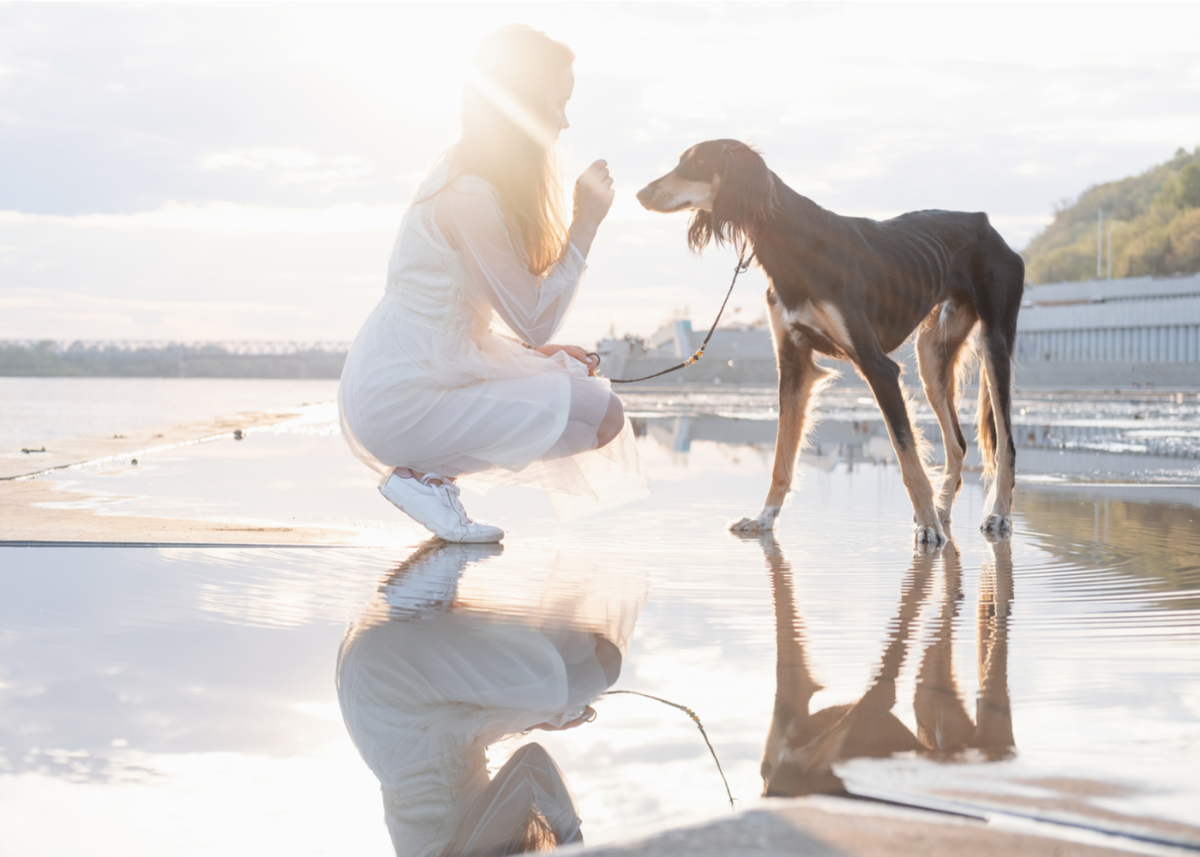 The graceful Saluki is naturally reserved, shying away from the company of strangers. A dog breed that is deeply dedicated to its family, the Saluki is gentle and loving but not particularly affectionate. A quiet dog, the Saluki rarely barks but will alert its family to the presence of unfamiliar people on their property.

The Saluki does get along well with other dogs but prefers the company of dogs of its own breed if possible. This sweet-natured sighthound is very soft and sensitive. As a result, this breed’s feelings can become hurt easily, and they absorb any stresses present in their home environment.

To help a Saluki that is entering a multi-pet family, it is best for introductions to take place in a neutral setting. The ideal spot for established family pets to meet their new canine family member is at a place like a quiet public park.

A breed with a sleek, well-muscled physique, the Saluki requires comfortable places in which to lay. Padded bedding, pillows, and soft blankets help this breed to feel at home. The Saluki is a dog breed that takes pride in its personal appearance, endeavoring to keep its body as clean as possible.

Salukis love the company of children. However, because of their size and speed, they are best suited to homes with older kids. It is best to supervise all interactions between children and the Saluki to ensure the safety of both parties.

Highly intelligent, the Saluki possesses the intellect to learn but often lacks the desire. Creative means will be needed to help this dog view training as a worthwhile exercise. Because the Saluki is a very sensitive breed, it is best to train this dog using positive reinforcement techniques only.

The Saluki will not thrive in an apartment, requiring room to stretch its legs. Its high activity requirements ensure this breed will not easily succumb to becoming overweight. A home with a fully fenced yard coupled with regular daily exercise is the key to optimal health and wellness in this breed.

The Saluki is deeply attached to its family members and becomes unhappy if separated from them for any length of time. With this in mind, the Saluki should be housed indoors. The breed’s short coat and sleek, thin body makes the dog unsuited to spending time outdoors in extreme weather conditions. The Saluki is a dog breed that typically enjoys excellent health. However, as with all dog types, there are a few genetic conditions the breed can be predisposed to developing. These include anesthesia sensitivity, hemangiosarcoma, cardiomyopathy, and hypothyroidism. Potential puppy owners should select a Saluki breeder that carefully employs the appropriate genetic testing to help prevent disease in the offspring of their breeding dogs.

A low maintenance dog, the Saluki’s sleek, short coat requires very little grooming. The breed does have feather-like hair on the legs, thighs, shoulders, tail, and ears. These areas should be brushed or combed to remain free from knots.

Because of its short coat, the Saluki sheds very minimally and its body remains clean and odor-free. It is recommended that the Saluki be brushed or combed once per week.

To keep the Saluki in excellent condition, regular tooth brushing is a must. Nail trims should be done as often as needed for optimal foot health, typically once per week.

The Saluki is not known to be a drooler. 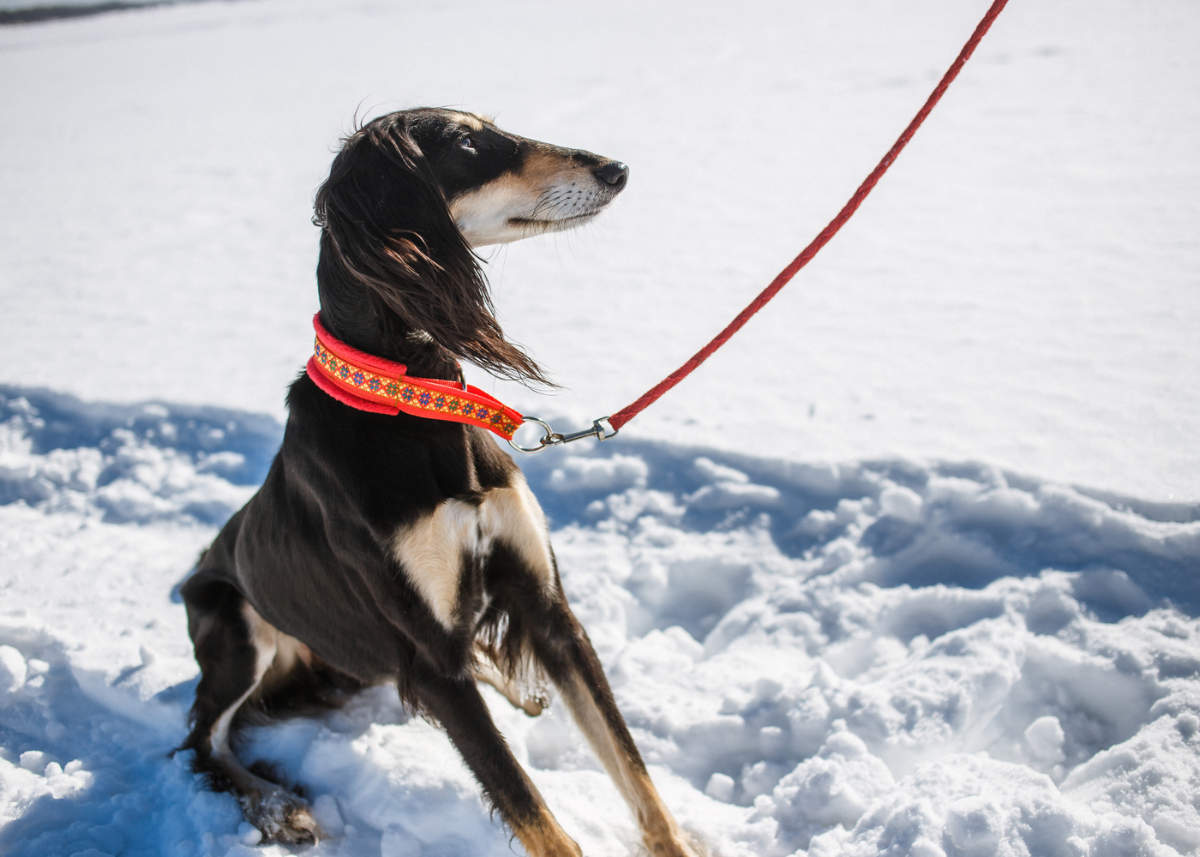 Training the Saluki can be quite a challenge. The breed is highly independent and is not particularly interested in learning new things. With this in mind, owners should use a creative approach based on positive reinforcement training to help the Saluki to see the value in participating in training sessions. With practice and patience, the Saluki can learn basic obedience commands in approximately six weeks’ time.

The Saluki requires a securely fenced yard in which to stretch its legs. This containment area should consist of approximately 300 to 400 feet in length or width. To prevent escape attempts, the height of the fence should be five to six feet at a minimum.

This breed can be very mouthy. To prevent this, owners should redirect the dog’s mouth to something more appropriate to chew on such as a toy or bone. Over time, the dog will learn how to use its mouth in a socially acceptable manner.

The Saluki has very high prey drive and loves nothing more than to chase small animals or other items the dog interprets as game. With this in mind, the breed should never be allowed off lead and a secure system for containment is an absolute must.

The Saluki is not a particularly vocal breed. 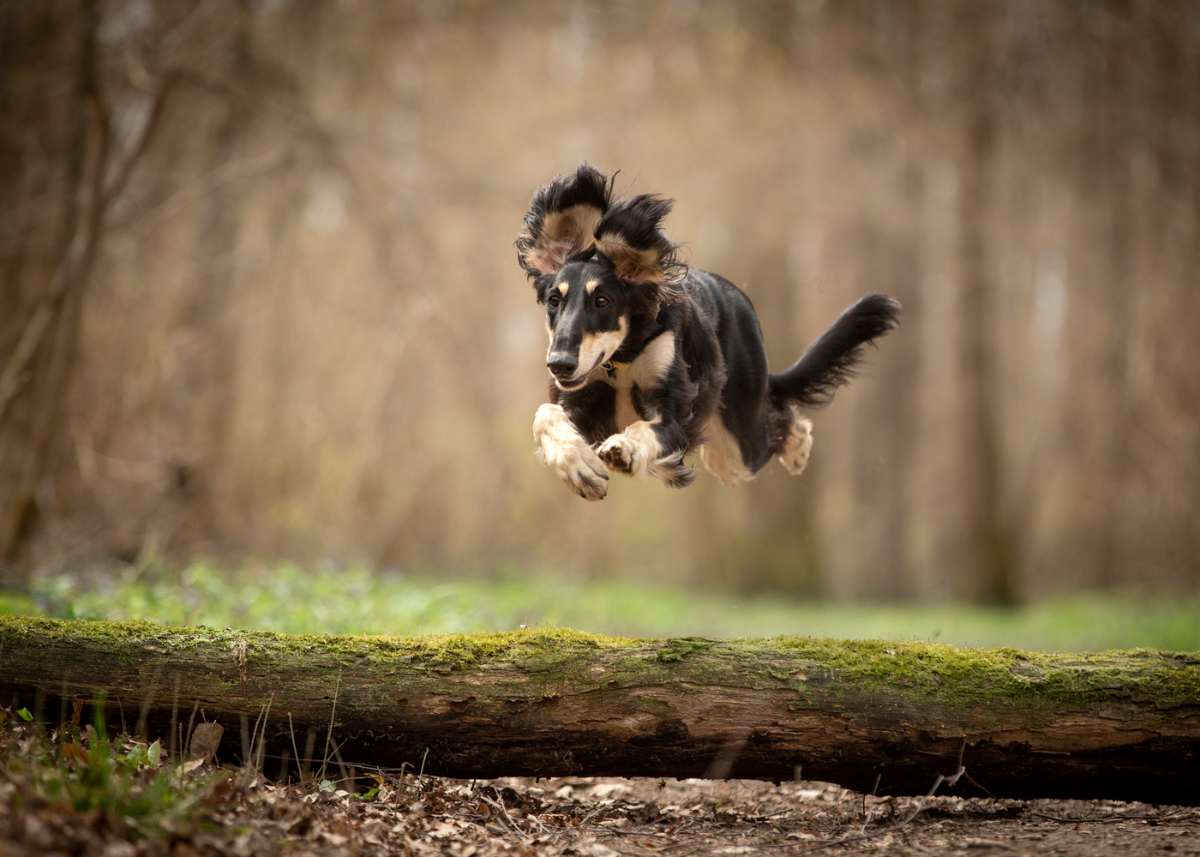 The Saluki is both athletic and energetic, requiring regular daily exercise at a vigorous pace. Owners of this dog type must commit themselves to a rigorous activity regime to help this dog be physically and mentally satisfied. 60 minutes of exercise is recommended as a minimum amount.

A dog breed that is highly playful, the Saluki loves nothing than more than having fun with its family and friends. 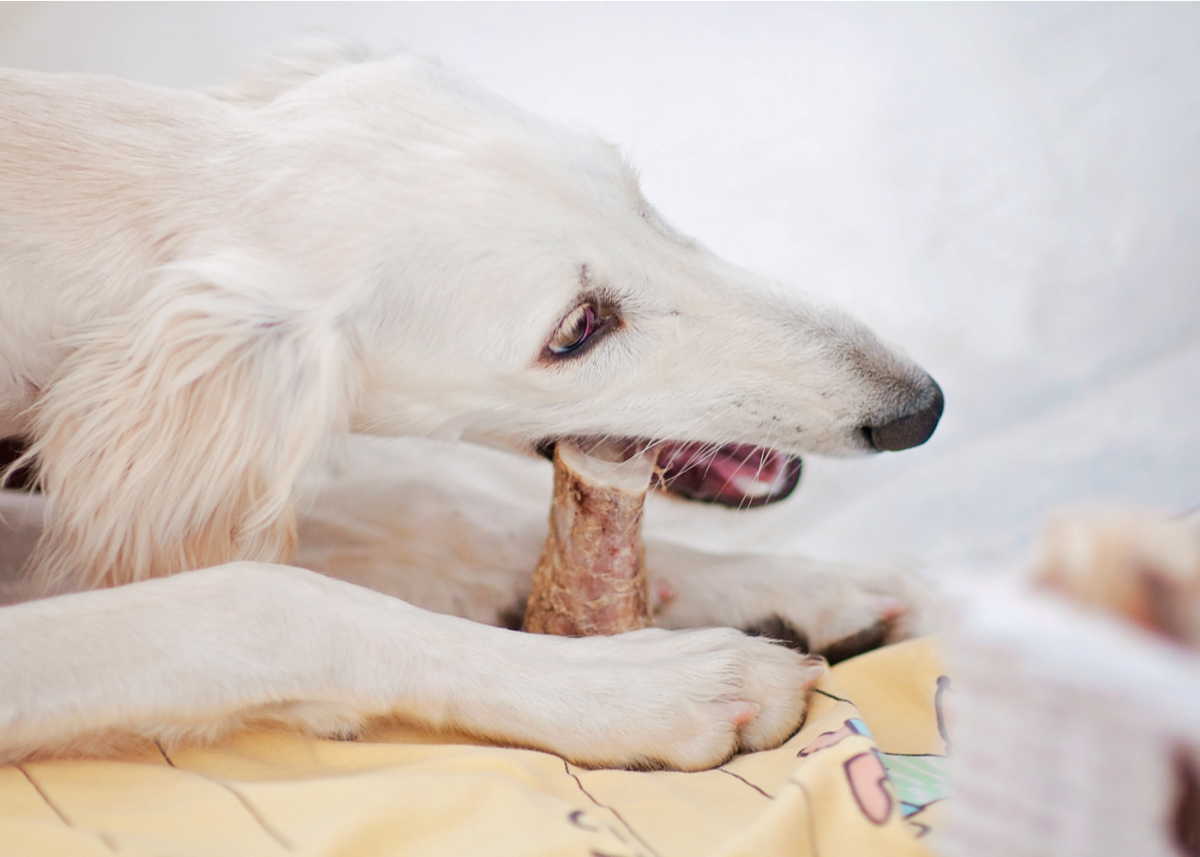 The Saluki benefits from a high-quality diet that is nutritionally balanced, age appropriate, and rich with lean proteins. A veterinarian can best recommend the specific formulation for the dog’s unique needs.

Puppies should always be fed puppy food since it is specifically formulated to meet the needs of a growing puppy. A diet that is not properly balanced can lead to rapid bone growth which can cause permanent structural issues. Likewise, adult dogs should always be fed a diet appropriate for their age and health condition.

To determine the amount of food the dog should eat, it is best to read the recommended serving sizes provided on the food’s packaging. This can serve as a general guideline but will need to be adjusted for dogs that are highly active or that are more sedentary.

For more information about finding a Saluki available for adoption in an area near you, we recommend these resources: