About The Shiba Inu

A relatively new breed in the United States, the Shiba Inu has a sleek and cunning appearance that closely resembles the fox. This Shiba is characterized by its unique ears that stand at attention and its unique tail which curls over its back. A breed that traces its roots to Japan, the Shiba Inu bears the distinction of being the smallest of the breeds of Spitz descent that are attributed to the region.

The Shiba Inu is well-renowned for its alert, confident nature. The Japanese refer to the breed as being in possession of three important traits: “spirited boldness,” “good nature,” and “alertness.” A breed known for its athleticism, the Shiba Inu is a dog of only moderate activity requirements but is game for any activity its family has in mind.

A dog type known for its exquisite movement, the Shiba traverses ground with an easy, agile trot. A curious sort, the Shiba Inu is a loyal and protective companion to all it knows and loves. The Shiba Inu thinks rather highly of itself and can be prone to obstinate behaviour, making the breed a challenge to train.

A dog breed known for its independence of spirit, the Shiba Inu benefits from frequent and early socialization. The Shiba Inu possesses natural intelligence; however, is wilful enough to use its smarts to avoid learning new skills. Potential owners should be prepared to invest both time and patience into training this breed.

The Shiba Inu can be prone to resource guarding. This possessiveness can be displayed when the dog feels its toys, food, or even its people are being sought after by dogs or children. To prevent this behaviour, training should begin when the Shiba first enters its new home. Prized possessions should be put away when the Shiba is around other dogs to prevent the potential for a fight.

The Shiba is a dog breed that can get along well with dogs and children so long as each is appropriate in their treatment of it. However, Shibas can be predisposed to aggression towards other dogs. Same sex aggression can be a problem in the breed.

It is not recommended for the Shiba Inu to be allowed off-leash except within the confines of a securely fenced yard. This is due to the breed’s natural propensity towards chasing prey.

The Shiba maintains a natural reticence towards strangers. It takes time and patience for the Shiba to learn to warm to new people.

Because the Shiba Inu is a dog renowned for its fiery temperament, high prey drive, stubborn nature, and potential for dog aggression, this dog breed is best suited to experienced owners. A fenced-in yard is an absolute necessity for this breed. 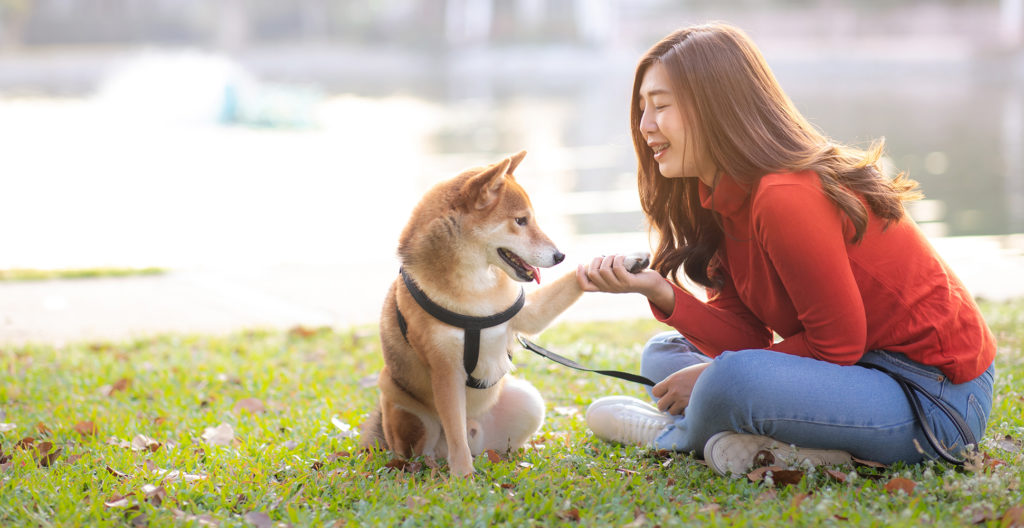 The Shiba Inu, a dog breed which traces its roots to Japan, is considered to be a dog type with ancient origins. Evidence of the Shiba exists from as far back as 300 B.C.

The Shiba Inu takes its name from the terrain found in the region in which it originated. Shiba is translated to mean “brushwood,” a handle which accurately describes the mountainous terrain and vegetation covering the region and which the dog would regularly need to traverse while out on hunts. However, some aficionados of the breed maintain that the term “Shiba” references the dog’s unique red hue.

The primary purpose of the Shiba Inu was to assist its owners on hunts by flushing game from their dens to above ground. The Shiba is one of six Spitz breeds hailing from Japan. These include the Akita, the Shikoku, the Kai Dog, the Hokkaido, and the Kishu.

Following World War II, the Shiba Inu numbers dramatically declined, putting the continuity of the breed in danger. Many of the dogs which remained after the war fell ill with distemper. A large number were killed in combat. A concerted effort was made by lovers of the breed to continue conscientious breeding to ensure the breed’s longevity.

The first Shiba Inu to land on U.S. soil travelled there with the family of a soldier in 1954.  Today, the breed has greatly increased in popularity in America, and the Shiba enjoys a rich lifestyle as a family companion, a hunter, and a showman at conformation events. 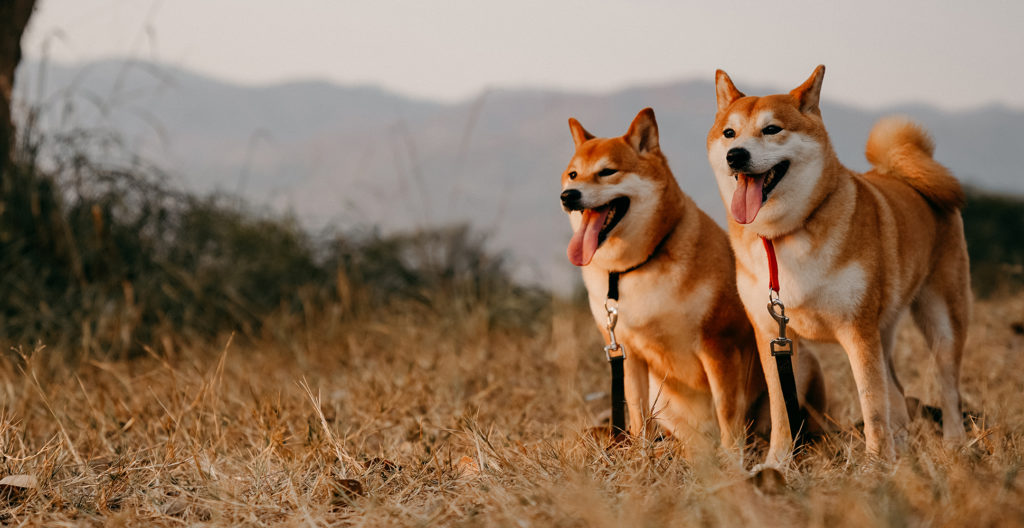 he typical adult male Shiba Inu stands between 14.5” and 16.5” at the shoulder and weighs approximately 23 pounds. By comparison, female Shibas can reach a height of 13.5” to 15.5.” The ideal weight for a female Shiba Inu is 16 pounds.

The Shiba is considered to be a small dog breed. Potential owners of this spunky little fellow must realize that the Shiba is a master escape artist. A securely fenced yard is an absolute must for this breed. 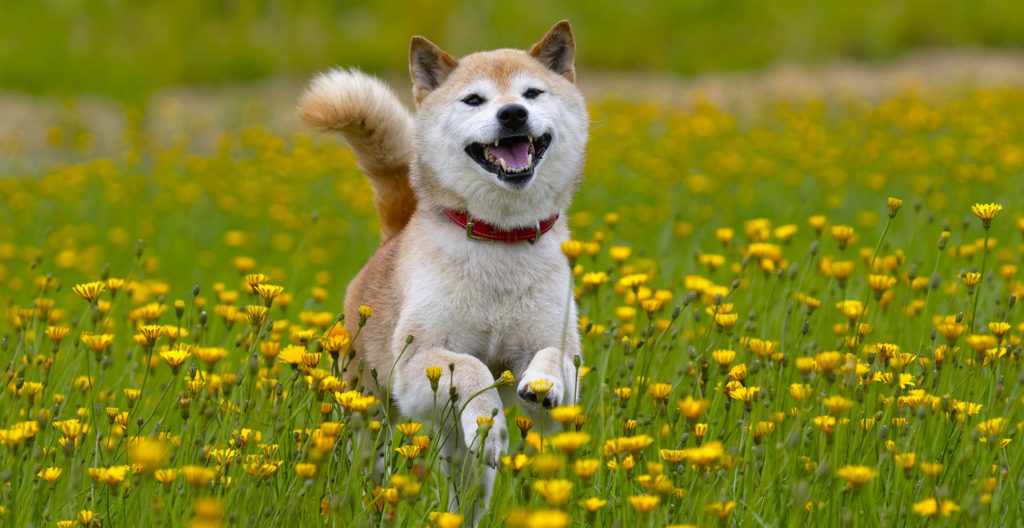 The Shiba Inu is well-renowned for its amiable, curious nature. The breed is extremely self-assured and is prone to wilfulness which can make the Shiba a

challenge to train. A dog breed that bonds deeply to its family, the Shiba Inu is naturally wary of strangers.

Resource guarding is well documented in the breed. To help a Shiba learn to share, it is best to begin socialization early on and to curtail any possessive behaviour. On the whole, the Shiba enjoys the company of other dogs but can be prone to same sex aggression. However, many Shibas cannot get along with other canine companions, particularly other male dogs that are unneutered.

The Shiba has a very high prey drive, and thus, is not well-suited to homes with small pets whom the dog may mistake for game.

A breed of great intelligence, the Shiba can also be very manipulative, easily outwitting its owners. Much time and patience must be exerted to effectively train this clever fellow. Shibas are particularly stubborn and are known for obeying only when the mood strikes them. They are extremely independent by nature.

The Shiba Inu is friendly with its family but aloof and wary of strangers. They enjoy cuddling with their families but are otherwise standoffish to newcomers.

Though the Shiba Inu can live peaceably with children, it is best to carefully supervise all interactions for the safety of the dog and the child. When introducing a Shiba to other family pets, it is best to do so in a neutral setting. New owners should note that this breed can be dog aggressive, and integration into a multi-pet home may not be possible.

The Shiba can thrive in an apartment due to its moderate activity needs. A highly independent creature, the Shiba does not mind spending time alone.

The Shiba’s coat makes him amenable to time spent outdoors in the cold. This dog type also can tolerate moderate heat well. 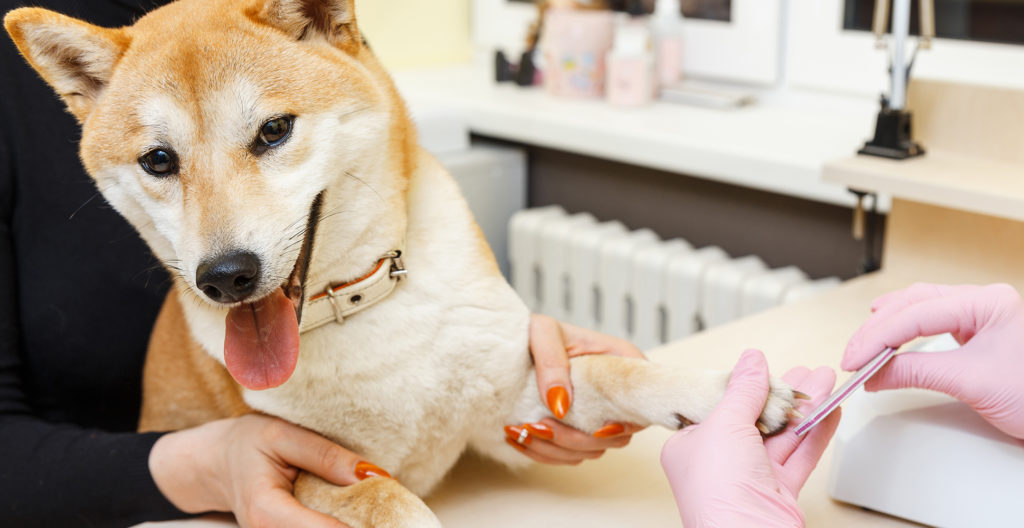 The Shiba Inu is a breed that typically enjoys excellent health. However as with all breeds, the Shiba can be predisposed to certain health conditions. All breeding stock should be carefully screened prior to use in a breeding program to ensure the health of future generations. Among the health problems which can plague the Shiba Inu are allergies, chylothorax, glaucoma, cancer, epilepsy, patellar luxation, hypothyroidism, progressive retinal atrophy, and hip dysplasia.

The Shiba is born with a dense two layered coat, giving him the unique appearance of a small, cuddly bear. The topcoat is wiry to the touch while the undercoat is very supple and plush. The Shiba Inu blows coat twice yearly, but otherwise, only sheds a moderate amount. Weekly brushing is recommended to help keep shedding at bay.

The typical Shiba Inu has very low grooming requirements. A dog that is not known for trapping odors in its coat, the Shiba requires bathing only when the dog rolls in something unpleasant or its coat becomes embedded with dirt, mud, or other debris. Often, blow drying the coat is sufficient to remove any dirt.

Nails should be trimmed on an as needed basis; most often at least once a month. Regular ear cleaning and dental care should also be maintained to promote optimal health and wellness.

The Shiba Inu is not particularly predisposed to weight gain. However, all food intake should be carefully monitored to ensure a healthy body condition.

Shibas are not known for excessive drooling. 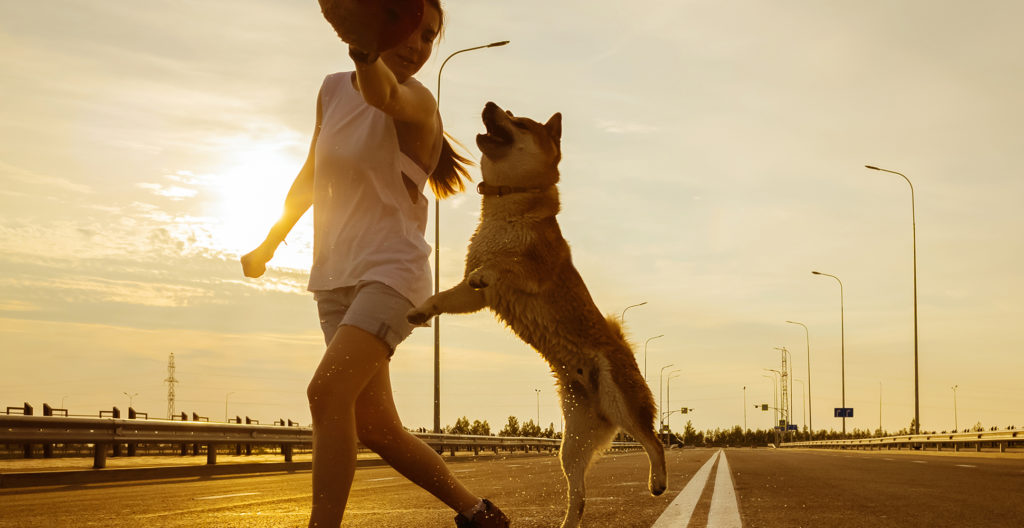 Shiba Inus are highly intelligent; however, they are not particularly interested in learning new things. It takes a committed, savvy owner to teach the Shiba proper canine manners and the needed obedience skills to live as a successful canine member of society. Because of the Shiba’s natural resistance to training, it can take up to two months or longer for a Shiba to learn the basic obedience commands.

Once a Shiba Inu has mastered learning new commands, it does not mean this dog breed will readily display them when asked to do so. A breed prized for its independent thinking, the Shiba Inu prefers to think of itself as a free spirit, obeying only when the mood strikes it.

No matter how much training is invested into a Shiba, this dog should never be allowed off lead except within a securely fenced yard due to the breed’s penchant for escapism. The Shiba is also in possession of an extraordinarily high prey drive, making it prone to chase small animals and to roam in search of prey if given any opportunity to do so.

Because the Shiba is naturally aloof and can be prone to dog aggression, early socialization is critical for this breed. Shiba Inu pups should be exposed to as many novel experiences as possible within a safe environment that promotes the dog’s natural curiosity.

A trait that is unique to the breed is the Shiba’s strong distaste for being held back. This includes a hatred of such important tools as collars and leashes. For this reason, leash training a Shiba Inu will require much patience.

The Shiba Inu is an exceptionally clean dog. This makes the breed easy to housetrain. Crate training is the recommended method for teaching the Shiba Inu the appropriate place to do its business.

A breed that can be very mouthy, it is important to teach the Shiba Inu puppy early the appropriate place to use its teeth. This can easily be accomplished through redirecting the puppy’s mouth to a toy, bone, or ball when the pup attempts to nip.

The Shiba Inu can be prone to being vocal. For this reason, the dog should be taught a “no bark” command to maintain peace with the neighbours. 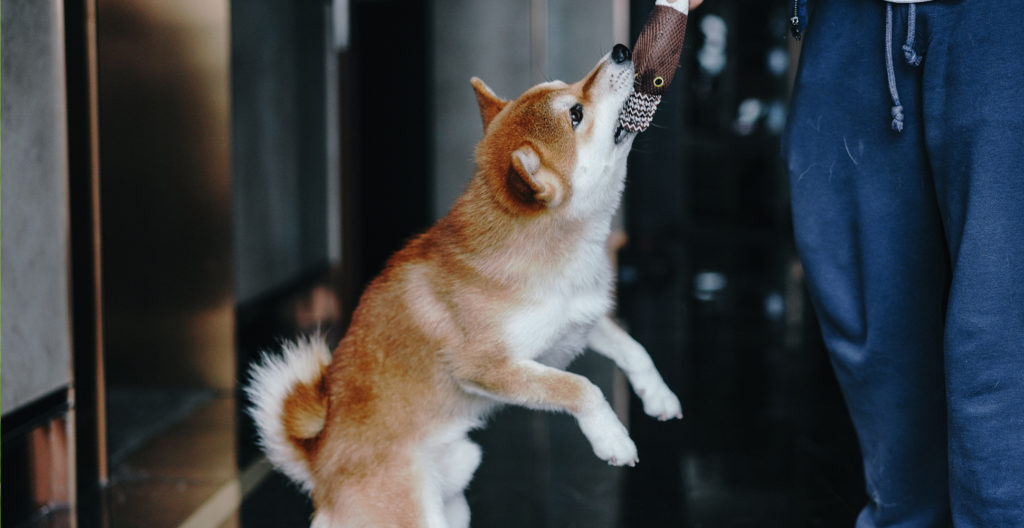 Shiba Inus do have a fair amount of energy which needs to be productively expended each day. However, a moderate walk of approximately 30 to 45 minutes per day should easily keep the Shiba mentally and physically content.

Shibas are extremely playful, delighting in time spent in active pursuits with their owners. Among the Shiba’s most favourite activities are walking, jogging, playing fetch, or dog performance sports such as agility or flyball. 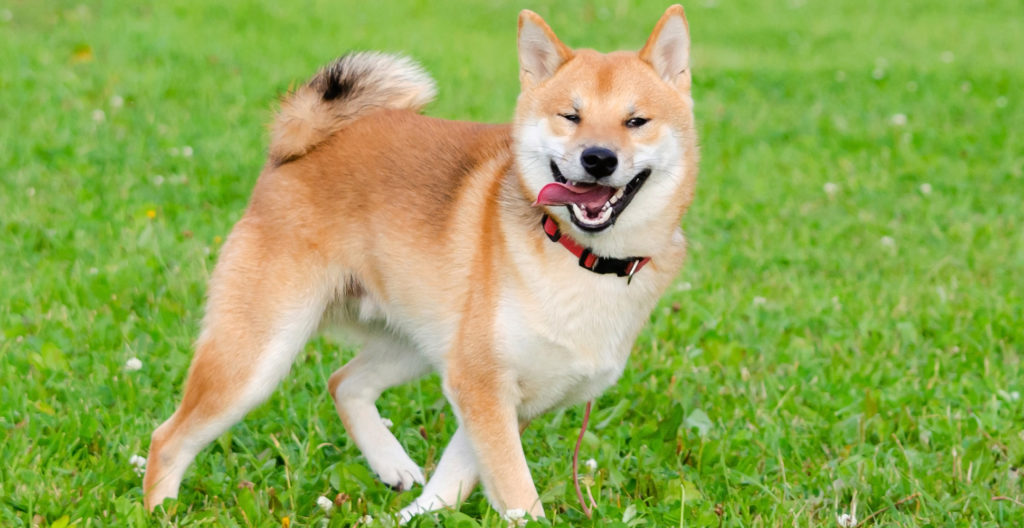 To ensure the Shiba Inu’s dietary needs are met, it is always an excellent idea to consult with a veterinarian for advice in selecting the right food. As a general rule, all Shibas should do well on a diet that is comprised of high-quality ingredients, that is well-balanced, and that is appropriated to the dog’s age, health, and activity level.

To help determine how much a Shiba should eat, the bag of food will offer suggested meal sizes. This should serve as a helpful guideline. Meals can be increased or decreased accordingly with the dog’s weight and appetite serving as important indicators of health. 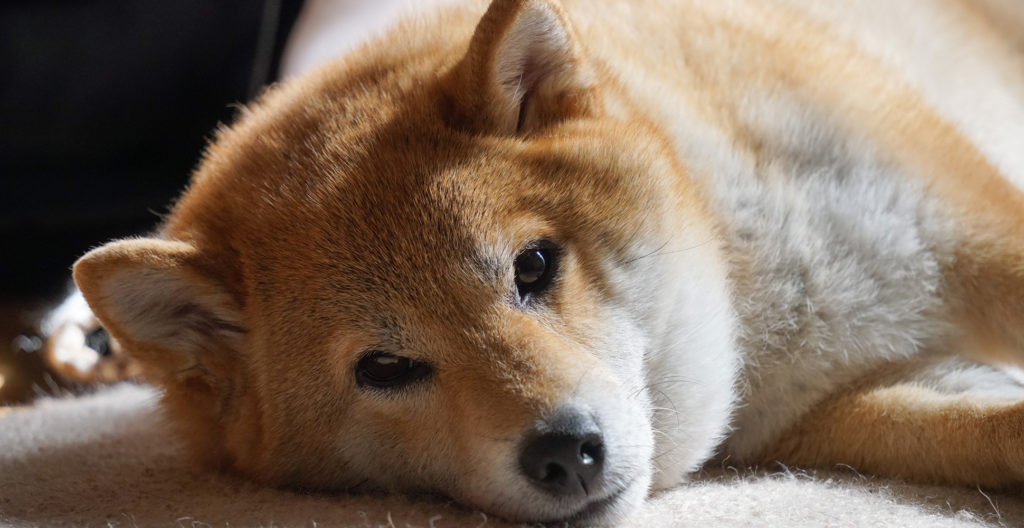 For more information about Shiba Inus available for adoption near you, we recommend consulting these comprehensive resources: