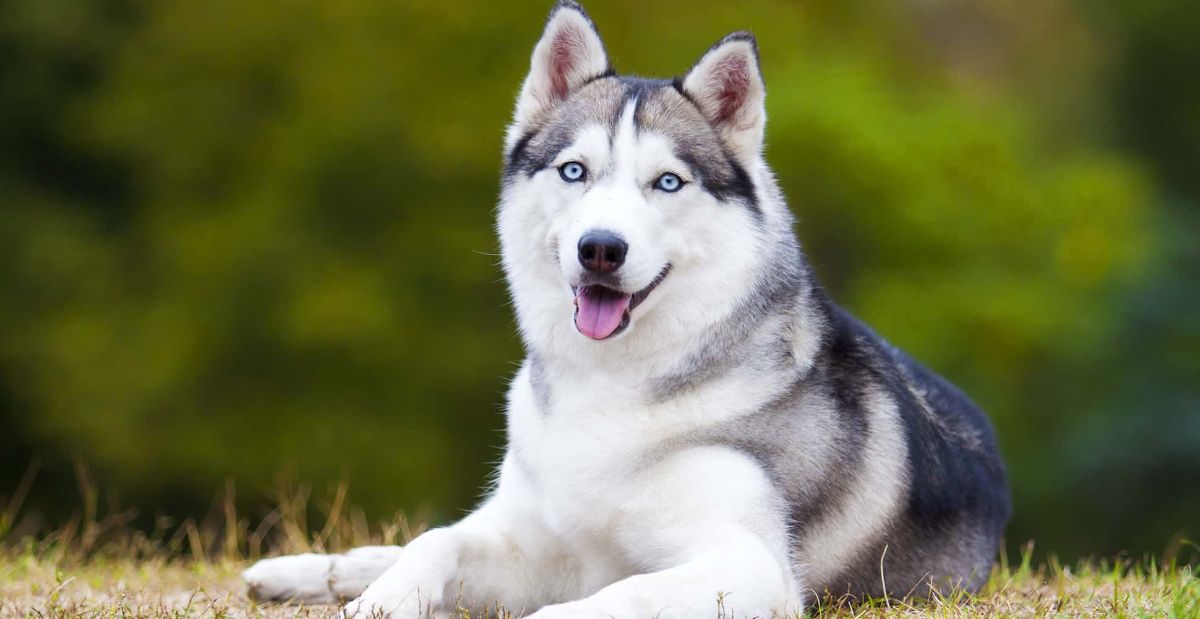 About The Siberian Husky 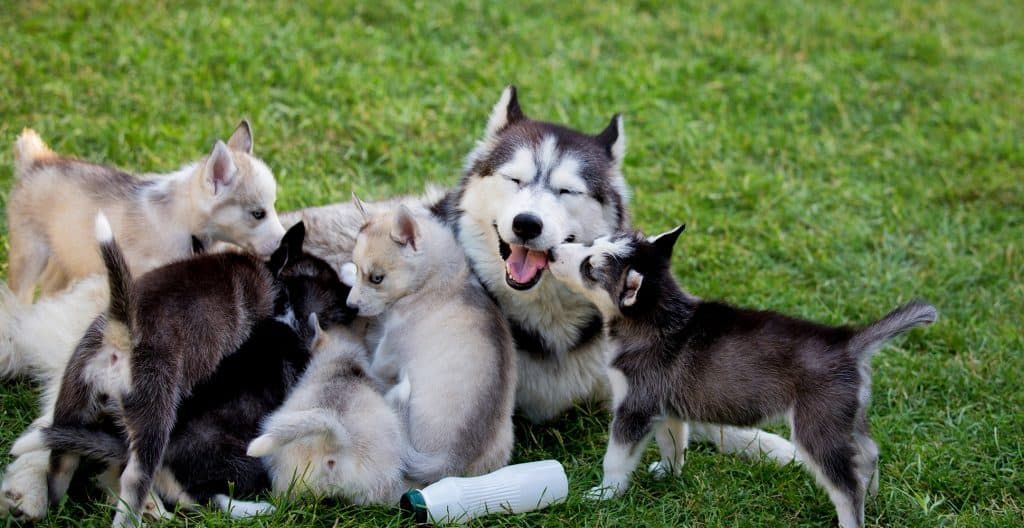 The Siberian Husky is a much beloved dog of medium build. A working breed, the Husky is a natural born athlete with the stamina and drive to easily fulfil its role. The breed’s original purpose was to function as a sled dog. Their innate intelligence makes them extremely clever and capable of learning new skills with ease.

Though many people are deeply enamoured with the Husky’s beautiful features, few realize how difficult the breed can be to live with. The Husky is not a dog for the novice owner.

The Husky is an extremely friendly dog that enjoys the company of all people; whether strangers, family, or friends. They are excellent candidates for homes with multiple pets due to their nature as dogs intended to work cooperatively within a pack. A breed characterized by its independent spirit, the Husky’s natural intelligence propels it towards mischief if its drive is not channelled productively.

Huskies are not a breed that can be described as easy to train, and they possess little drive to please their owners. For this reason, training a Husky can be very challenging. Obedience training is a must for this strong-willed breed as these few basic commands could save the dog’s life.

The Husky is only moderately prey driven; however, the breed does have a penchant to roam. Their natural intelligence makes them extremely skilled at discovering ways of escape from even the most secure containment system.

The breed is easily recognizable by its stunning eyes which are almond in shape. The Husky’s eyes can be blue or brown, and at times, a pup is born with one of each hue.

A dog of exceptionally high energy requirements, the Husky must engage in vigorous exercise on a daily basis to remain physically and mentally content. This intense drive to move makes the Husky ill-suited to apartment living. The breed thrives when given a large, fenced space in which to roam and expend its reserves of energy.

The Siberian Husky traces its roots to a group of nomadic peoples living in Siberia. This tribe was known as the Chukchi. There is very little known about the true history of the Husky; however, DNA evidences supports the claim that this dog breed is quite old. The Chukchi employed the dogs as family companions and working dogs, making use of their strength and stamina to pull loads of supplies through the snow.

The breed was brought to Alaska in 1908 where it enjoyed popularity as a sled dog during the gold rush days. It has been noted that all Husky transportation from Siberia to the United States was completed by 1930 when the Soviet government regulated export laws, forbidding the transport of animals outside their borders.

During the Husky’s time in North America, the breed continued as a well-loved working dog. Though today the Husky remains true to its working roots, this breed’s primary role is that of a cherished family pet. 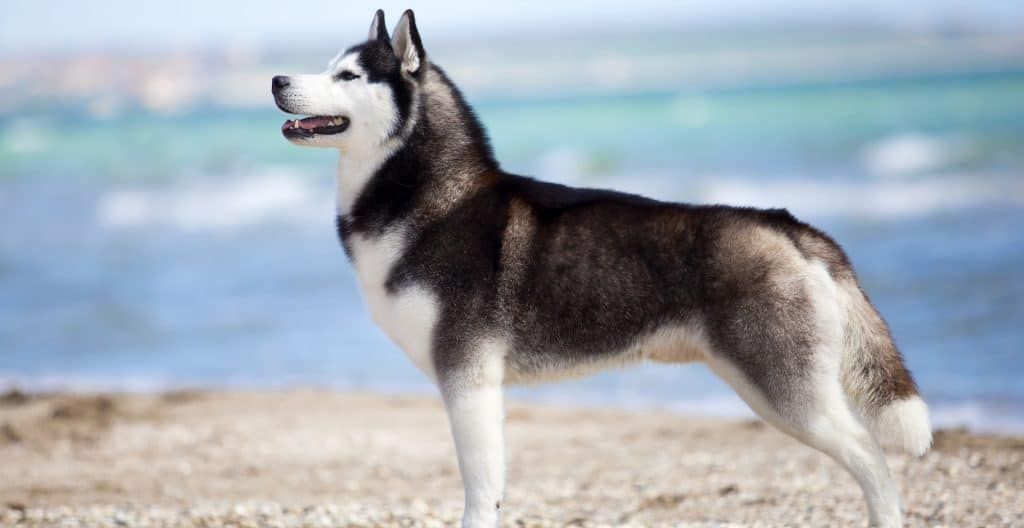 Because the Husky has a penchant for escapism, potential owners should be certain to purchase collars that are properly fitted to the dog as well as leashes of sturdy construction. This will help ensure the dog cannot slip its collar and head off on an adventure that could end in tragedy. 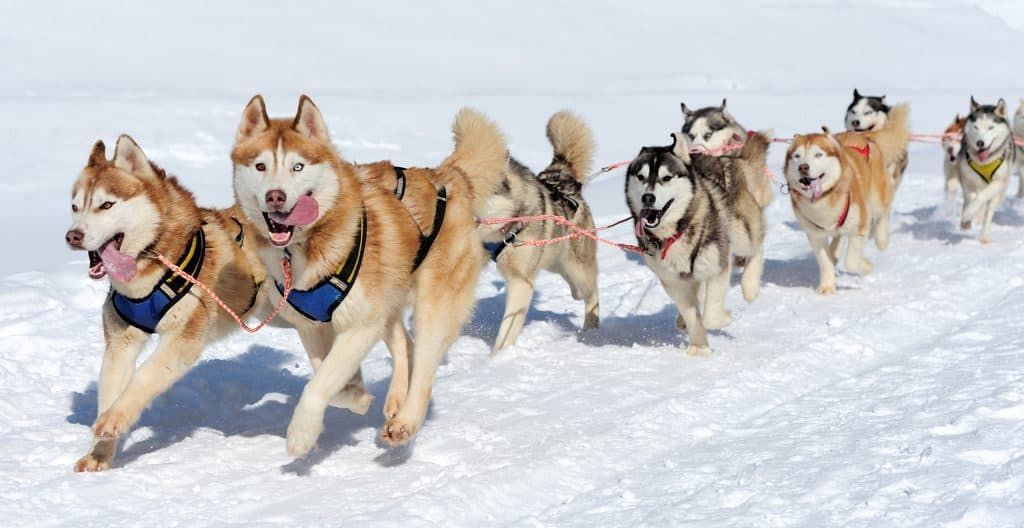 The Siberian Husky is an independent thinker and will not respect an owner who does not establish their authority. For this reason, it is important to establish boundaries early on and to remain consistent in all expectations for the dog. The Husky is a dog that will consistently test its owner, so resoluteness is essential.

Huskies possess extreme reserves of energy which can lead to destruction if the dog becomes bored or does not receive adequate exercise. A highly social breed, the Husky will not thrive if expected to spend much time isolated from its family. Though an Arctic breed with the coat to withstand cold temperatures, the Husky is a dog that craves human companionship and should be housed indoors.

A breed that is known for its love of digging, it is difficult to break the Husky of this habit. Most owners opt to designate an area within their yard where the dog can dig to its heart’s content. This type of dog is incredibly playful with its puppy-like enthusiasm but can get up to mischief when left unsupervised.

Though the Siberian Husky does not bark, the breed greatly enjoys making noise. The Husky has a distinctive howl and will engage in this practice for hours if allowed to do so. 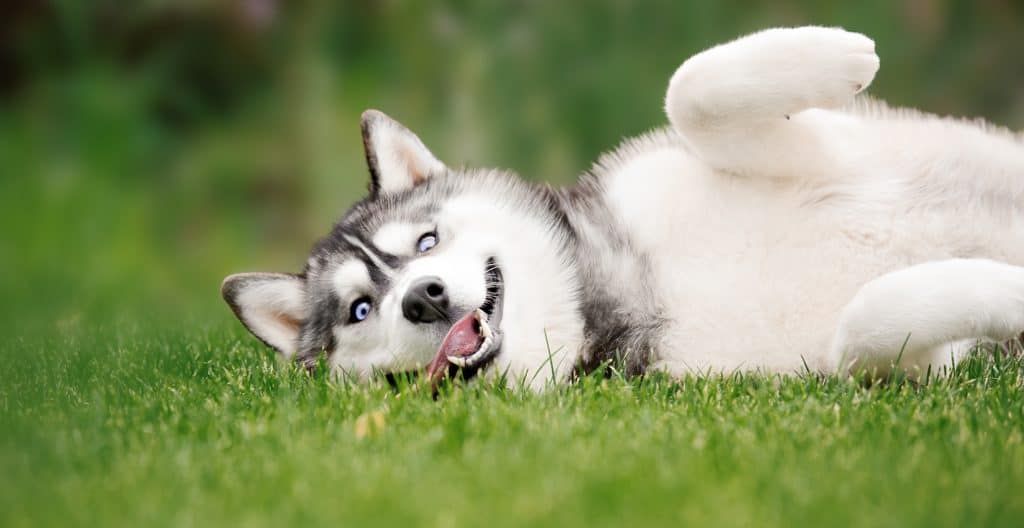 By nature, the Husky is sociable, patient, and kind. Affectionate to both people and other animals, the Husky makes friends with great ease. The breed excels with children, but to err on the side of caution, all interactions should be carefully supervised.

A pack animal, Huskies enjoy the company of other dogs and typically do very well in a home with other pets. To help smooth the path to success, it is wise for all initial greetings between established pets and a Husky puppy to occur at a location outside the home.

Since winters in Siberia often meant a lack of available food, the Husky does possess a moderate prey drive and will willingly roam if given opportunity. This can mean the Husky will attempt to chase or hunt smaller animals such as rodents, rabbits, or even cats.

The Husky is not a breed that can thrive when living in a small space such as an apartment. They are also not a dog that will tolerate spending much time on its own.

A dog with a thick double coat, the Husky can endure the harshest winter conditions; however, this dog breed prefers only moderate heat. 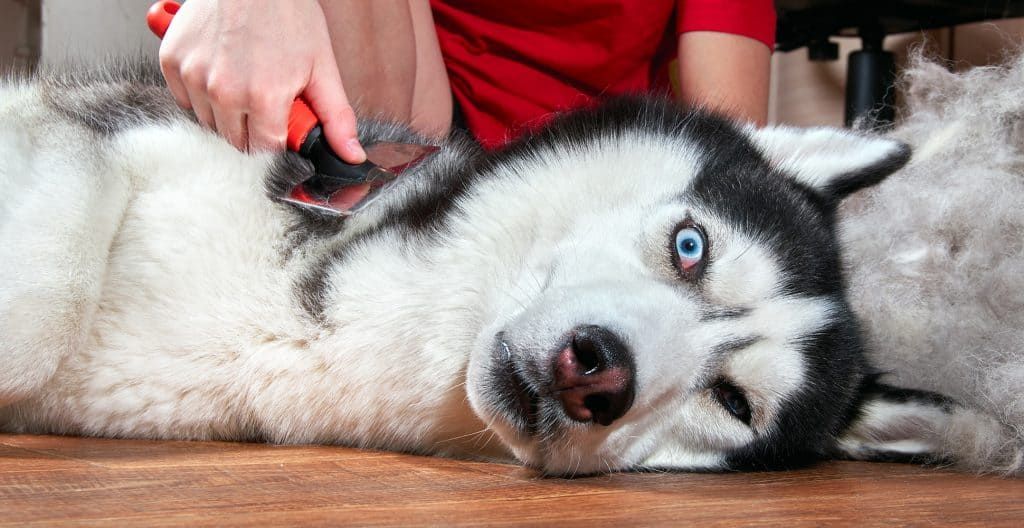 The Siberian Husky is a dog known to enjoy good health. However, as with all breeds, there are certain illnesses which can befall this beloved dog. Careful screening of all breeding pairs by reputable breeders can help to eliminate the spread of disease to the next generation. Among the health conditions that can be commonly seen in Huskies are cataracts, corneal dystrophy, progressive retinal atrophy, and hip dysplasia.

The Husky takes great pride in keeping itself clean. As a result, this dog breed only needs to be bathed occasionally. However, since the Husky’s coat does shed moderate amounts, it is important to brush the dog on a weekly basis at a minimum. A dog breed in possession of a thick double coat, the Husky’s undercoat will blow twice each year.

Regular nail trims should occur several times a month to maintain good foot health. Ear and dental care are also an important component of a health and wellness strategy for this breed.

The Husky’s high drive makes the breed unlikely to gain weight. However, it is still recommended that the dog’s food intake be measured and monitored. Weight loss is of a greater concern in Siberian Huskies, so it may be necessary to adjust portion sizes to encourage the maintenance of the proper body condition. 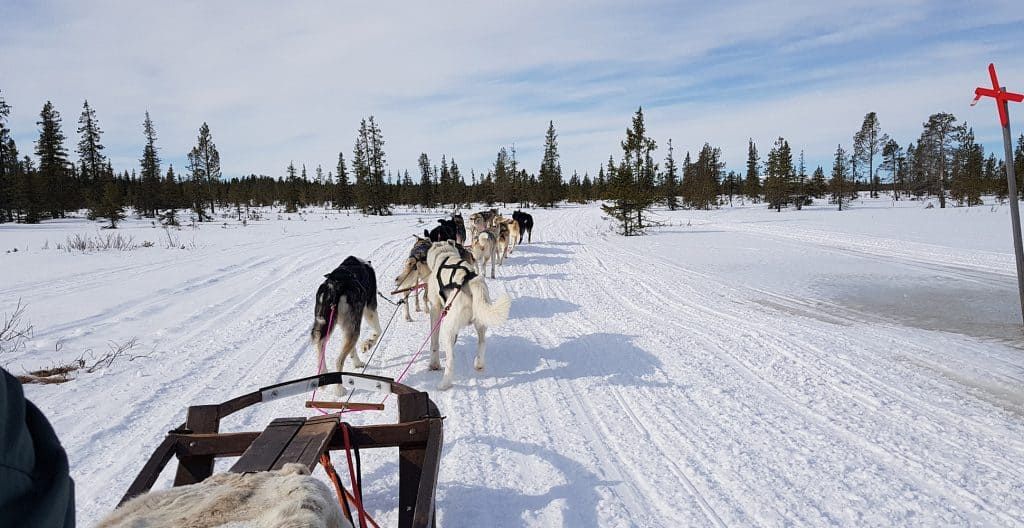 Since the Husky possesses the intelligence to learn but often not the willingness, owners will need to invest a significant amount of time into training the Husky. In order for training sessions to be effective, owners must establish their authority and teach and reinforce clear boundaries for the dog. Though the Husky can learn the basic obedience commands in as little as two weeks, it may take this tenacious breed up to two months or more, depending on its level of cooperation.

The Husky is well-known for being a star pupil when in class then obstinate when at home. Consistency is key to learning with this breed.

Though all breeds should be taught proper leash manners, this strategy is essential for the Siberian Husky. Huskies should never be allowed off lead in an area that does not possess secure fencing. This type of dog rejoices in the opportunity to stretch its legs and will give no care or consideration to the location of its owner when off for a run. The dog’s natural prey drive also makes it prone to wandering.

The Husky is a mouthy breed, a habit which should be curtailed early. To do this, simply redirect the dog’s attention to something more appropriate for chewing or biting such as a bone or toy.

Though Huskies do not bark, they take great delight in howling. 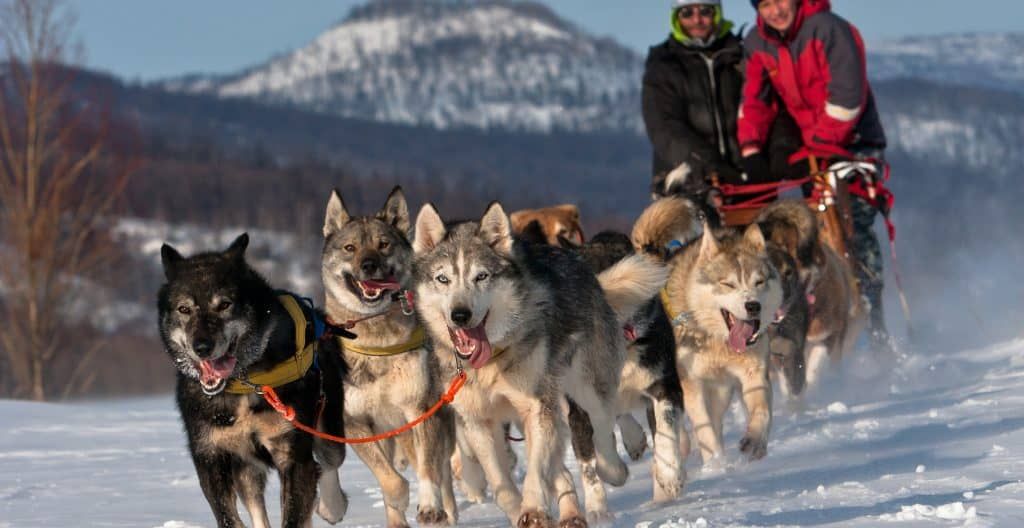 Since the Siberian Husky has extremely high energy, this dog breed requires a minimum of 30 to 60 minutes of vigorous exercise daily. Though the Husky enjoys running, it is best to avoid this type of activity during the hottest portions of summer.

Siberian Huskies are most content when given a job to do. Since most families do not have a need for a sled dog, this can be accomplished through such activities as hiking, running, or dog performance sports.

The Husky is a very playful dog that welcomes every opportunity to have fun with its family. 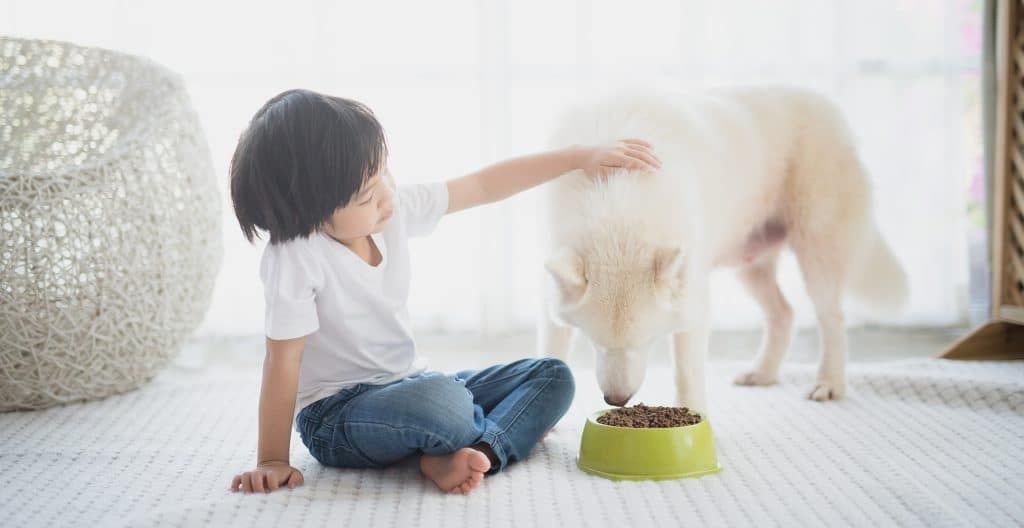 To help provide the best nutrition for this dog breed, it is best to consult the advice of a veterinarian. In general, a high-quality diet that is nutritionally balanced and age appropriate is an excellent selection for the Siberian Husky.

Puppies should be a fed a puppy food to ensure the needs of their developing bodies are met. In the same fashion, adults should receive an adult formulation which has been specifically designed to meet their requirements for their age, health condition, and activity level.

To determine the correct amount to feed, the label on the bag food can provide an excellent guideline. Serving sizes can be adjusted according to activity level. The dog’s appetite and weight will serve as an excellent help in establishing appropriate meal portions. 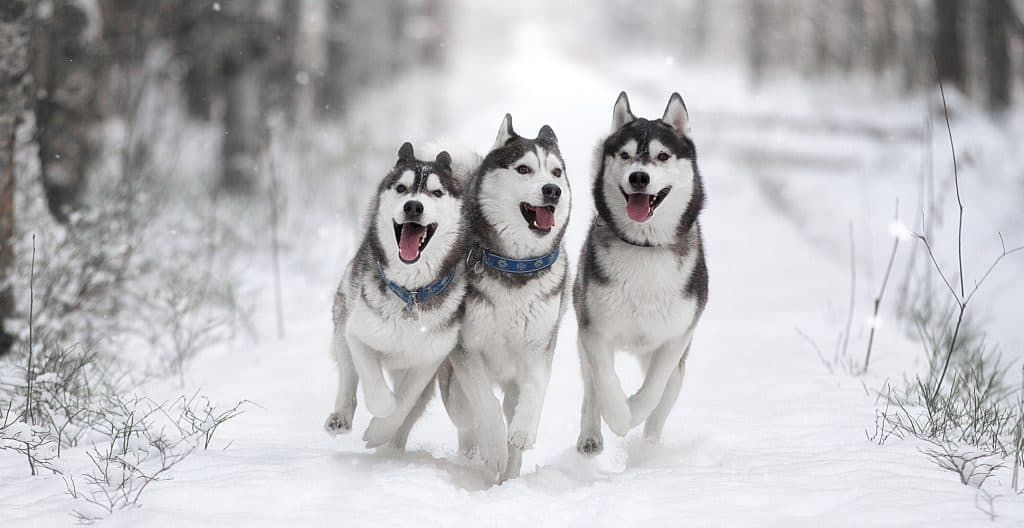 For more information about Siberian Huskies available for adoption near your city, we recommend the following comprehensive resources:

No votes so far! Be the first to rate this post.