What is an Isabella French Bulldog?

It’s not a surprise that the adorable French Bulldog is one of the world’s most popular small dog breeds. Their wrinkly faces, big ears, and charming expressions are irresistible. There’s no doubt that they make great companions.

There is a wide range of french bulldog colors, but have you ever heard of an Isabella French Bulldog?

An Isabella Frenchie simply refers to a French Bulldog with a liver-colored or grayish, brown coat that has a gray, lilac hue to it.

This lilac or blueish tint comes from a diluted gene (we’ll go into that more later). Their coats can appear almost velvety and are stunning to look at! They can look similar to blue French Bulldogs, but blue Frenchies have a blue tint rather than a lilac one.

Isabella French Bulldogs can have light-colored eyes, which can be light brown, blue, gray, or amber. They may have white markings on their chests and faces. Their noses tend to be grayish-brown or pale pink, and they often have pale pink skin around their eyes, nose, and mouth.

When they’re puppies, they may have more of a blue hue which will change slightly as they get older.

How Rare is The Isabella French Bulldog?

There are also lilac Merle French Bulldogs which are very rare, but they have a different coat pattern than the regular lilac Frenchie.

When it comes to French Bulldogs’ colors, the rarer they are, the more expensive they tend to be. Breeders have to breed them carefully to get the distinctive Isabella coloring.

Lilac vs Isabella French Bulldog – Is There Any Difference?

The truth is that both the Isabella and the lilac Frenchie are essentially the same thing, just under different names. You might see the terms used interchangeably online.

How Are They Bred? 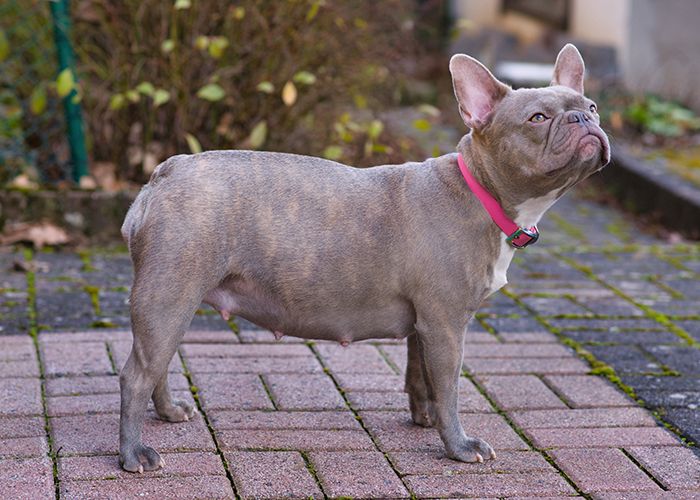 To understand how they’re bred, we first need to understand the basics of how genes work. You’ll see lots of terms online to explain this and they can seem complicated, but don’t worry, they’re not!

You’ll have heard of genes: humans (and other animals, including dogs) inherit them from their parents. They’re made up of DNA and make us who we are!

Chromosomes are structures that store part or all of the DNA of an animal. Alleles are variants of a gene.

For each place on the chromosome where a gene is, there are two alleles (so, two variants). One comes from each parent, to make the two.

The gene that causes this lilac color is a recessive gene. This just means that its effect is only shown in the dog if there are two alleles for that coat color.

So, Frenchies need to inherit the lilac gene from both parents! You might hear this being referred to as homozygous, which just means two copies of the allele.

The locations of genes on the chromosome are referred to as a ‘gene locus’, and they often have letters. For example, the locus for the liver, brown, or chocolate color in dogs is called the B locus. If you see it written as BB, this means the dog has two copies of the allele like we discussed earlier.

The locus for the rare dilute gene is called the D locus. If you see it written as DD, the dog has two copies of the allele.

To be an Isabella Frenchie, the dog needs to inherit BBDD. BB for the liver color, and DD for the dilution of the color.

To make sure the puppies inherit this coat color, both parents need to have the gene. They either both need to be Isabella Frenchies themselves or have a DNA test to ensure they have the genes required before breeding. There must be a testable chocolate gene, meaning the vet can prove the dog carries the gene.

Since French Bulldogs have large heads and small hips, breeding naturally can be quite difficult. This is the main reason a lot of French Bulldog breeders turn to artificial insemination for the breeding process to keep the dogs safe and get effective results.

Why Are They Called Isabella French Bulldogs?

The term ‘Isabelline’ is a term used in the dictionary to describe colors that are: “grayish-yellow, light buff, pale cream-brown, dingy yellowish gray or drab”. It can be shortened and referred to by the female name Isabella.

It was first noted in England in reference to Queen Elizabeth I in 1600 when talking about one of her gowns.

The terms Isabelline or Isabella have been used since 1840 to talk about the color of animals, including French Bulldogs, other dogs, and horses.

Essentially, the reason the term Isabella was first used to reference the lilac French Bulldog is unknown. However, there is one ‘legend’, you might say.

The story goes that they are named after the daughter of the King of Spain whose name was Isabella. Apparently, Isabella refused to change her underwear until Spain won a battle for a fortress. Unfortunately, the siege went on for three years!

The story says that she stuck to her promise, and her underwear turned a unique color. Hence the name of the dog. Not very pleasant!

This is quite the story and it’s likely untrue, but you will find it written about in a number of places.

Are Isabella French Bulldogs Accepted by the AKC?

The American Kennel Club breed standards only list a certain number of specific Frenchie colors and the lilac Frenchie is not one of them. However, in the case of the Isabella Frenchie, it doesn’t mean they aren’t a purebred Frenchie necessarily, only that the Kennel Club doesn’t recognize their coat color.

Like other French Bulldogs, Isabella Frenchies are prone to a range of health issues. One of their main health problems is issues with their breathing. Due to their short snout and flat faces, they’re known as a brachycephalic breed.

Breeds of dog that are brachycephalic can suffer from brachycephalic obstructive airway syndrome, which causes abnormalities in their airway. Brachycephalic dogs often find it tough to breathe properly. Their respiratory problems also make them high risk in hot weather and can make going under anesthetic risky.

As well as their breathing issues Frenchies are prone to:

Isabella Frenchies can be prone to additional health conditions aside from those the regular French Bulldog struggles with. These health issues are related to the gene that causes their coat color. These conditions can include additional spinal issues and alopecia, which causes hair loss.

Getting a French Bulldog puppy from a reputable breeder can reduce the risk of these health issues.

Despite their small size, like all Frenchies, the Isabella Frenchie has a big personality! They tend to be playful, very friendly, and charming. It’s no wonder they’re such popular breeds!

They’re fun to be around and they love people. They tend to be very loyal to their owners and will be on alert to make sure you’re safe. They usually get on well with other dogs and animals, especially when socialized early on in their life.

When it comes to training, they can be quite stubborn but with consistency and training from early on, they can be well trained. Frenchies are very food motivated, so high-quality treats will be your most effective tool during training!

What Are Their Exercise Requirements?

Frenchies have quite a bit of energy but due to their size, they don’t need a huge amount of exercise. In fact, it’s really important you don’t over-exercise them due to their breathing difficulties.

A short to medium walk each day is ideal. You can also play outdoor games with them in place of a walk now and then. You should keep them mentally stimulated by playing games indoors to engage their mind.

Frenchies are actually really good at getting involved in canine sports, such as agility and obedience training. However, due to their large head making their front heavier than their back, they shouldn’t be allowed to go swimming as they can get into trouble quickly.

Never exercise your Frenchie outdoors in very hot weather. As we mentioned earlier, this can put them at risk for heat stroke very quickly due to their breathing issues. Instead, when it’s hot weather, take them out to the toilet early in the morning and later at night when it’s cooler.

How Much Do Isabella French Bulldogs Cost?

Since they’re so rare and they are tricky to breed, Isabella Frenchies can cost a lot of money. Rare colors tend to lead to a high price tag. Frenchies only tend to give birth to two or three puppies per litter (although this varies), which drives the price up even more.

Isabella French Bulldogs can cost between $5000 and $15,000. Of course, this depends on where you live and the breeder you buy your puppy from.

If you see a lilac Frenchie on sale for considerably less than this, it’s probably not a reputable breeder so it’s best to stay away.

Remember to always research your breeder and ensure you see both the whole litter and the mother and the father in their home environment. Buying from a responsible breeder reduces the risk of health issues for your puppy and ensures you aren’t contributing to the puppy farm trade.

Remember that this is just the initial cost to purchase your puppy. You also need to be able to afford ongoing vet bills (remember those health issues we mentioned earlier). You need to take into account insurance payments, dog food, beds, toys, harnesses, leashes, collars and other items your dog will need.

Buying a dog is a big commitment so make sure you do lots of research first. Ensure you pick a breed that suits your lifestyle and that you can afford to care for. That way, you and your dog can have a wonderful life together!