Dogs are amazing pets, but they do have their little quirks! One thing that you might have noticed your dog doing is hiding his treats instead of eating them straight away. While this may seem strange to us, it is actually something that many dogs do.

This article is going to explore the reasons behind this behavior in a bit more detail. 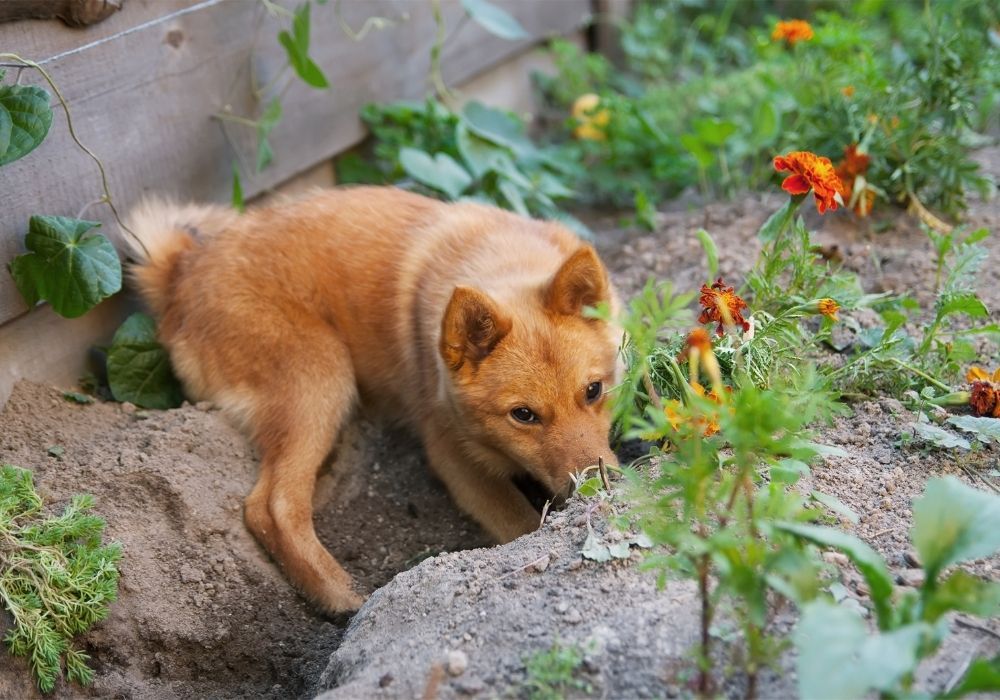 Many dogs will bury treats because their instinct is driving them to do so. Dogs in the wild will often eat until full and then try and stash remaining food for later—burying a carcass in this way stops other scavengers from getting hold of it. It also keeps the meat fresher, hidden away from sunlight, meaning the dog can come back and eat more later.

So by this same logic, some dogs may be hiding treats so that other pets in the household don’t get hold of them. This allows your dog to save his treat for later without leaving it at risk of being eaten in the meantime!

If your dog is already full, then he may be trying to save his treat for a later time. This again comes back to his ancestors’ natural behavior, who would save excess food for later.

You may want to question whether your dog is being overfed. Equally, if he already has a chew or a treat, it would be wise not to give him a second until he has finished the first. 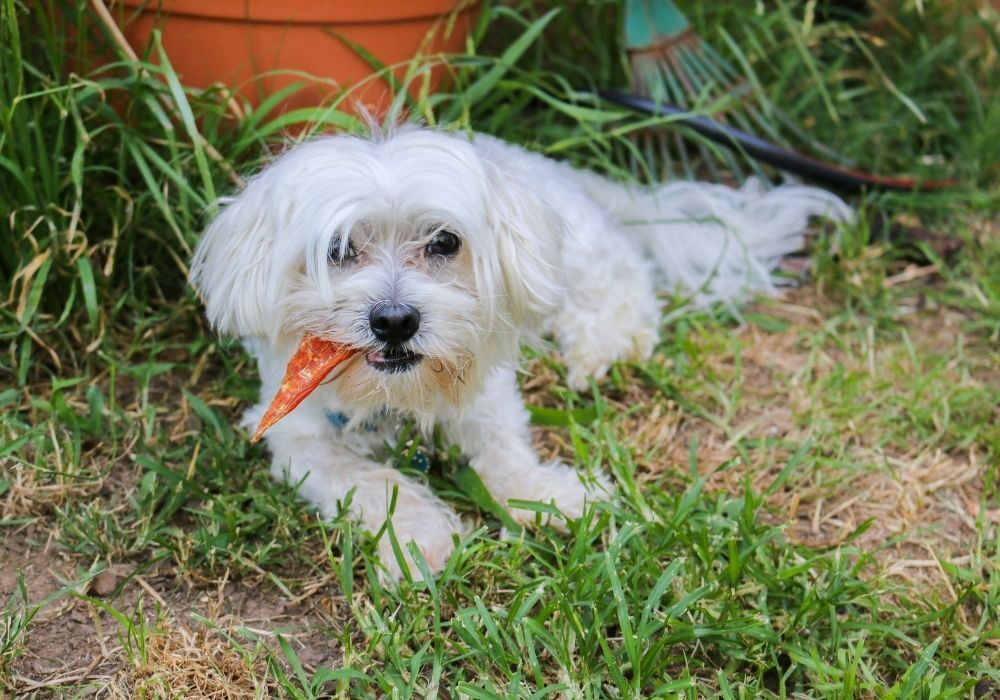 If hiding treats is new behavior for your dog, and it coincides with other changes, then it could be anxiety or stress causing the problem. Usually, your dog will show additional negative behaviors such as becoming more withdrawn and hiding away or even destructive behaviors like barking, chewing, and scratching.

Sometimes there is an obvious trigger for this such as a recent house move, someone new moving in, or even a new pet joining the household. Thunderstorms and fireworks can make your dog act out of character too. Separation anxiety can cause behavior changes, so if your dog is not used to being left alone he may act out due to stress.

Some dogs can become possessive of things, especially when new animals are introduced to the household or if you have a dog visiting with friends or relatives. Burying treats could be a way of stopping the other dog from getting them. If a dog has had a negative experience and been abused or starved in the past, they may feel very protective of food, and hide it for fear of it being taken away from them again.

Some dogs may simply be thriving on the attention that burying their treats gets them! This behavior might have accidentally been encouraged by ourselves. We could have inadvertently praised or made a fuss of him for the first few times he did it and thereby rewarded his actions.

Many people find the behavior cute and funny initially, especially as we have all been brought up on things like cartoon dogs hiding their bones! But the novelty may wear off once your lawn is full of holes…

Boredom can be a reason that some dogs start misbehaving too, which could occur if your dog isn’t going out on enough walks or getting enough stimulation.

Is it normal for dogs to hide their treats? 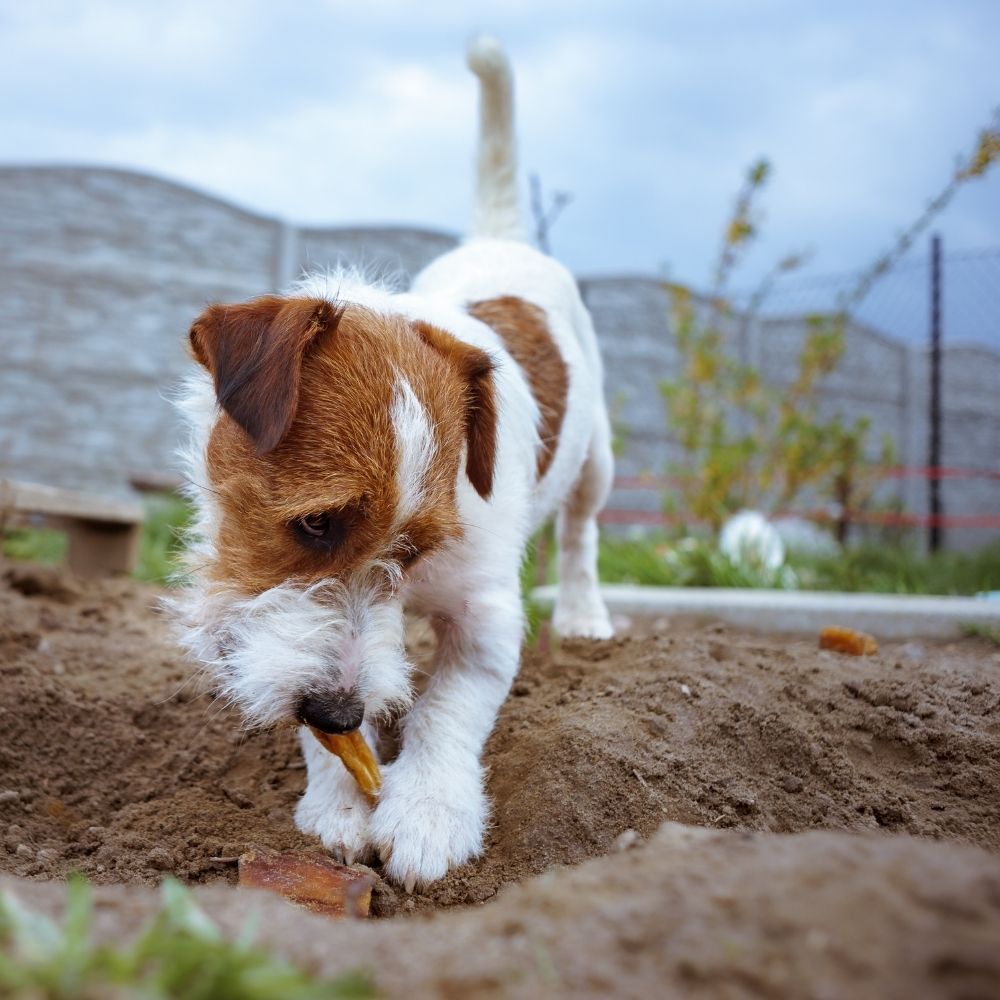 Yes! Some dogs will do it because their instincts tell them to. Many will find the act of digging pleasurable and it is a way of being busy and getting some mental stimulation. So if your dog is otherwise happy and well in himself then burying his treats is not concerning.

However, if it is new behavior and accompanies any other worrying behavioral changes then it could be a sign that something else is going on. Check that he is not being overfed and that he’s not getting too many treats, as this could be driving the behavior in some dogs.

Could it be a health problem?

Stress and anxiety may be an underlying issue that drives some dogs to do more treat burying, and so should be addressed if this is the case.

Occasionally, if a dog is feeling nauseous or unwell they may bury their food because they don’t feel like eating it then and there. Monitor them for changes in appetite generally or any other signs they could be unwell like weight loss, diarrhea, or vomiting.

You should try and keep an eye on where your dog is hiding his food, in case it turns bad or moldy. Dispose of any spoiled treats before your dog can come back to eat them. Moldy or rotten food can cause illness such as stomach upsets.

How to curb the behavior 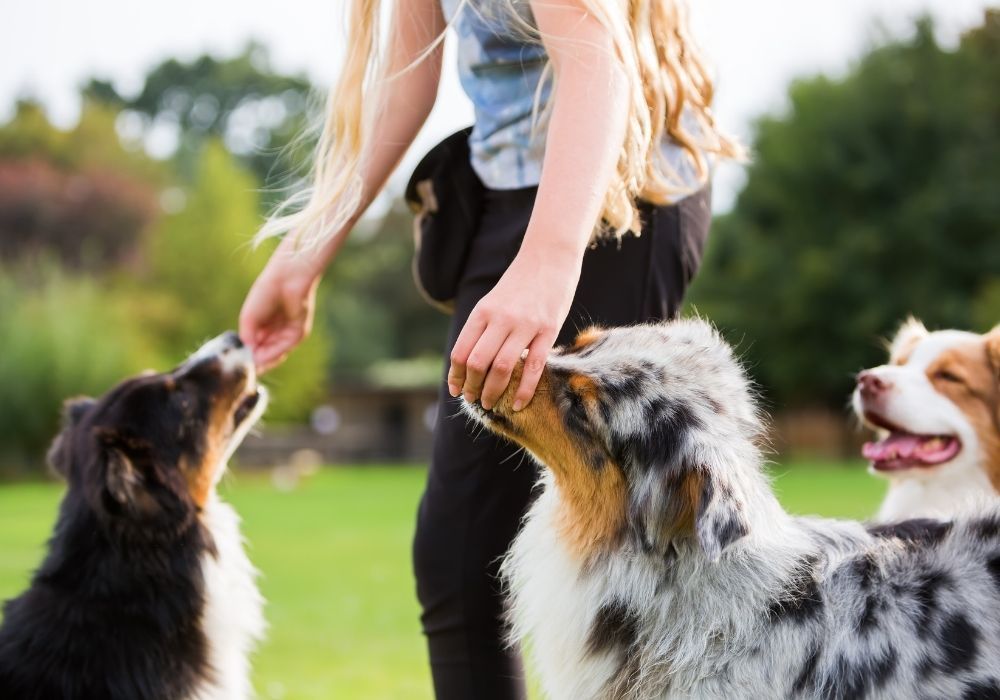 Although it is something that comes naturally to our pets, having treats hidden around the garden and house is a bit of a nuisance at times, especially if your dog is digging holes to do it!

If your dog is burying treats as a way of attention-seeking it is important to ignore the behavior and not give him any recognition for it. Don’t reward him by giving him more treats or toys to replace the treat he has hidden either, as that will only reinforce things.

It is also worth noting that dogs react to both positive and negative attention, as either way the focus is on them. So try not to shout if your dog is digging or treat-burying again as that will be giving him attention. Instead focus on praising your dog when they are doing the correct thing, eating their treat, or playing nicely.

Watch out for overfeeding

Make sure you aren’t overfeeding your pet. If he is not keen to eat the treats straight away then question whether he is hungry enough for them in the first place.

Maybe cut back on the treats and tidbits for a while, and make sure you are giving him appropriate amounts at mealtimes as well. When you do give him a treat make sure he has somewhere quiet and undisturbed to enjoy eating it.

Don’t give him access to places he can dig unsupervised. Think about feeding him his treats at certain times of the day or in a room of the house where he is less likely to try and bury them. You could even fence a portion of your yard to try and curb any digging behavior.

If you are worried it is a new behavior and perhaps linked to anxiety or stress, then you should try and address the underlying causes of this. Things like plug-in pheromone diffusers can help calm a stressed dog, as well as making sure he is getting out and about for plenty of walks. Seeking the advice of a qualified dog behaviorist may be necessary in some cases.

However, if the behavior isn’t bothering you, you might decide to just leave things as they are!

If your dog is otherwise happy and well, then they are probably hiding treats because of instincts or just because they enjoy doing it! If the behavior doesn’t bother you, then it’s fine to turn a blind eye. Improving his mental stimulation and looking at his diet may help improve things in some cases though.

If your dog is showing any other symptoms or negative behavior then you may need to seek advice from a veterinarian or a qualified behaviorist if you are unable to get to the bottom of it yourself.