Why does my dog lick other dogs’ urine?

Dogs are cute, but they can be pretty gross at times too, like when they lick each other’s urine! When this happens it can be embarrassing, but you might find it worrying too; you could also be wondering if this habit will make your dog poorly or not. This article explores this idea a bit further, as well as the reasons why they might do it in the first place.

What is the vomeronasal organ? How does it help dogs learn more about fellow dogs?

Dogs have something called the vomeronasal organ (or Jacobson’s organ), which is located in the roof of the mouth. This organ contains a collection of extremely sensitive scent detectors, registering all sorts of information about the other animal, including hormone levels and other markers unique to that individual. This helps dogs when it comes to mating, hunting, and social relationships.

Some dogs will also perform the Flehmen reaction while licking another animal’s urine. This is where they press their tongue to the roof of the mouth, almost looking like they are stopping to savor the taste of it. Instead, what they are actually doing is saturating the vomeronasal organ with urine to get as much information out of it as possible. 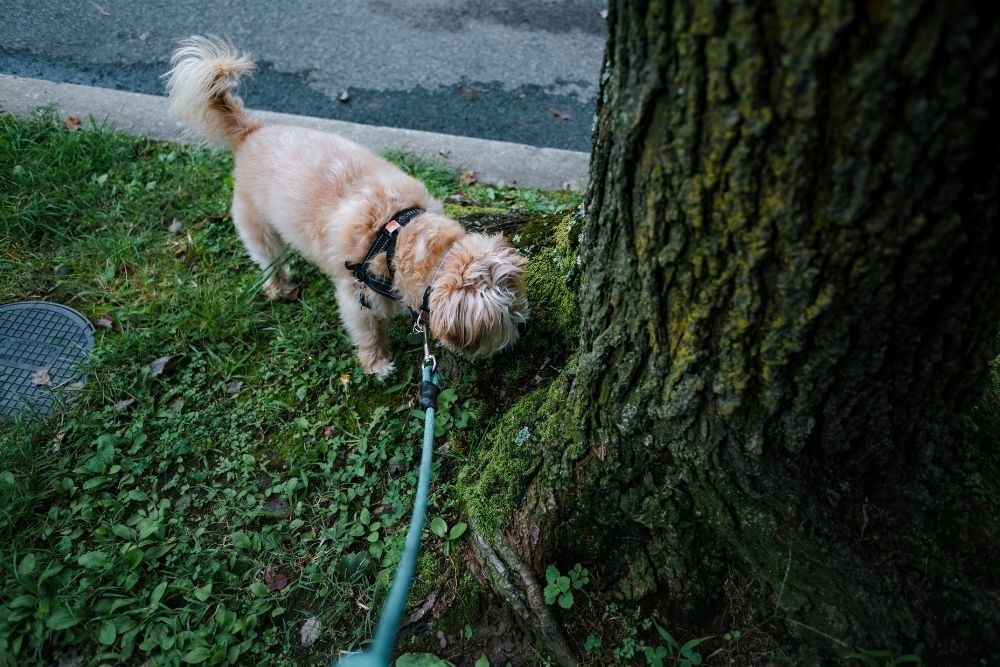 Urine is a combination of hormones, ammonia, uric acid, and bacteria

Most people view urine as purely a waste product. While in some respects this is true, urine contains much more information than we often give it credit for.

Ammonia and uric acid are the by-products of protein metabolism in the body. They are unwanted waste products that are processed and expelled via the kidneys, along with water. Urine can be concentrated or dilute, depending on the hydration status of the animal and any underlying disease processes.

Most urine is relatively sterile and harmless, though it may contain small levels of normal bacteria. These bacteria are unlikely to make other animals unwell. Dogs may be able to tell if a urinary tract infection is present with higher levels of bacteria present.

How can a dog learn about another dog through its urine?

By sniffing and licking urine, your dog can find out a lot of information about the animal that deposited it there. Dogs can work out the gender of the other dog that urinated there, with male dogs also detecting if it was a female dog in heat and ready for mating.

Licking urine that has been left for scent marking can help your dog to work out how long ago the other dog passed through the area, as markers in the urine will be unique to each dog. This can help when establishing territories and social packs. Your dog may also be able to detect illnesses such as urinary tract infections too. 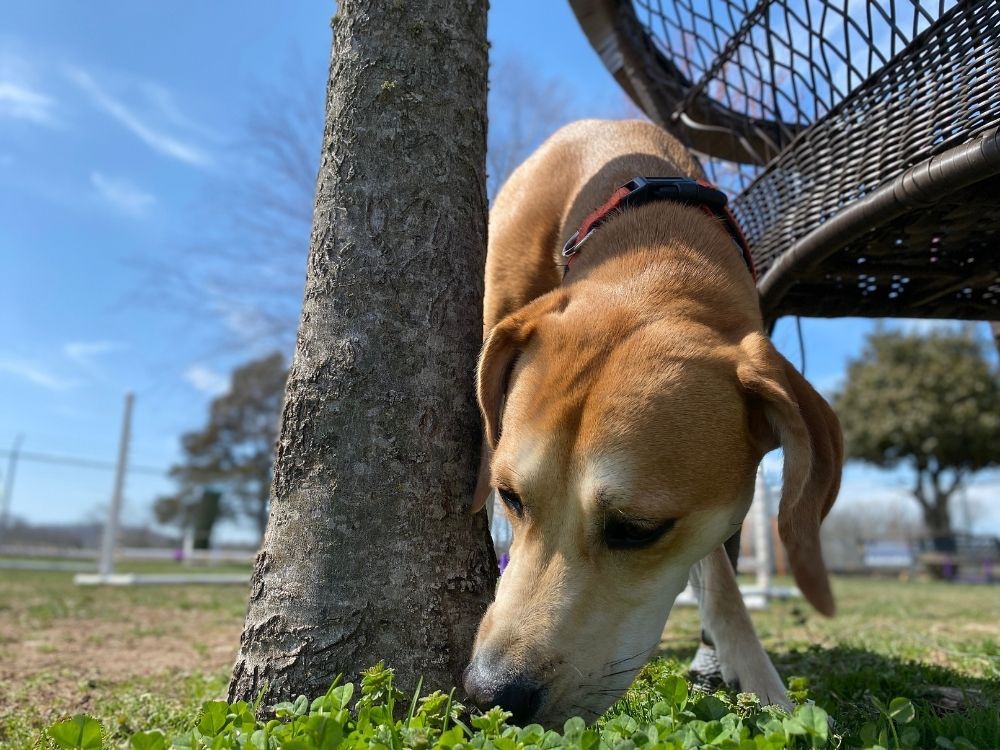 Things to keep in mind

It is a normal instinctive behavior

Sniffing and licking other dogs’ urine is an instinctive behavior, something that is ingrained in them since birth. Their wild ancestors would have done exactly the same, to learn more about other dogs that they encountered.

It won’t make them sick

In most instances, licking urine won’t make your dog unwell, unless your dog has a severely compromised immune system, and even then the risk is low. Urine is usually sterile, or has small amounts of normal (commensal) bacteria as it leaves the other animal’s body, and shouldn’t cause your dog to develop a stomach upset.

Even if the other dog happens to have a urinary tract infection, the bacteria will usually be destroyed by your dog’s stomach acid and wouldn’t cause any ill effects. There is a rare exception to this which we will look at in more detail below.

Don’t scold your dog for this behavior

You must never scold your dog or punish them for this behavior; it is completely natural and is how your dog understands the world more clearly. Part of going for a walk should be allowing your dog to sniff and lick at things. Much like how we read newspapers or scroll social media, this is how your dog gets their daily news report!

Leptospirosis is an extremely rare exception

While most of the time, licking another dog’s urine won’t cause any ill effects, there is a rare exception. A bacterial disease called Leptospirosis (known as Weil’s disease in people with the illness) can be caught by licking or accidentally ingesting infected urine. This could be urine from an infected dog, or more likely from another infected mammal such as rats; it can also be caught from stagnant water such as ditches and ponds.

Leptospirosis is a type of bacteria known as a spirochete that can cause damage to the kidneys. If left undiagnosed and untreated, this disease could be fatal; it can be treated through antibiotics, but only if caught early. It is a zoonotic illness, which means people can catch it too.

If your dog is vaccinated against leptospirosis then their risk is much lower than that of an unvaccinated dog. Your veterinarian will advise you about leptospirosis as part of your dog’s regular booster vaccinations. Prevention is far easier than cure for this illness, so vaccination is important.

Symptoms of leptospirosis in dogs

Symptoms of leptospirosis can be non-specific, meaning that diagnosis may not be made straight away. Your veterinarian will need to do some tests, such as analyzing blood samples, performing urine cultures, and maybe even diagnostic imaging (x-rays and ultrasound) to rule out other conditions.

Generally speaking, though, your dog may show some of the following symptoms if suffering from leptospirosis:

Your dog may not seem their usual self and could be quieter than normal. If they are showing a lack of interest in the things they normally like doing, such as going for walks, playing, or barking, then they could be depressed.

If your dog feels unusually warm to the touch, then they could have a fever. One of the body’s defense mechanisms against infection is to raise the core temperature to try and impair the bacteria. This has the side-effect of making your dog feel unwell and depressed. 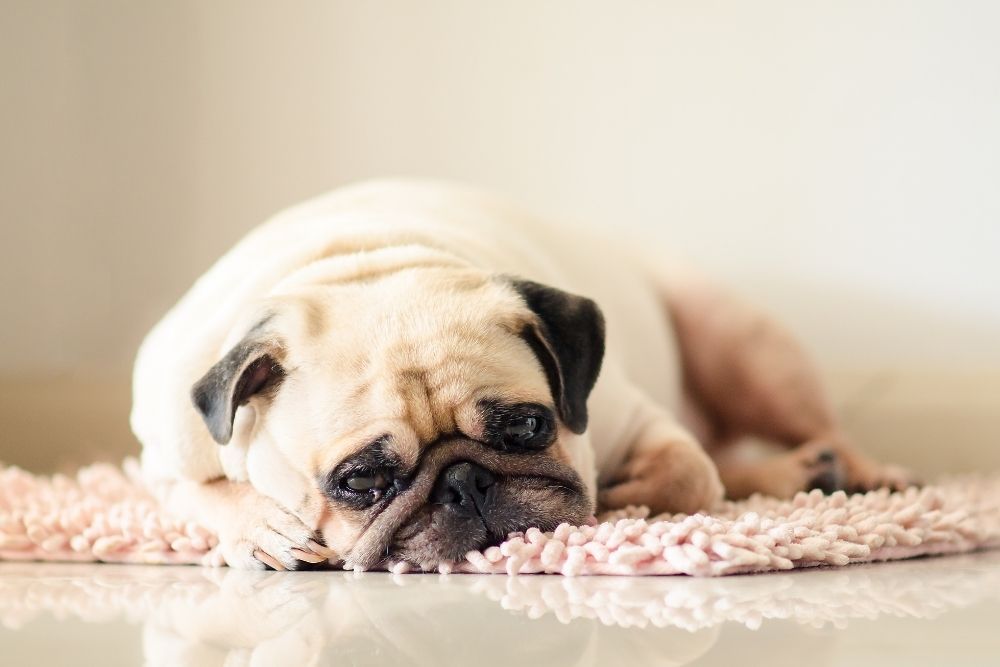 If your dog is not keen to go for walks or is spending a lot of time sleeping, they could be more lethargic than normal. Being lethargic is a non-specific sign, but if your dog is out of sorts in this way then you should take them to a veterinarian for a check-over.

Digestive upset such as vomiting can be a symptom of leptospirosis. This may also cause them to feel nauseous and put them off their food. So if your dog is eating less than normal or being sick you should get them checked out.

Licking another dog’s urine is perfectly normal behavior, despite it seeming a bit unpleasant to us! They learn a huge amount of information about other dogs by doing this, and it’s not something they should be told off for. In the majority of cases, your dog will be absolutely fine if they are otherwise in good health, and shouldn’t get unwell from licking urine.

In very rare cases, Leptospirosis could be contracted, but this risk will be greatly reduced if your dog is vaccinated against this disease. If your dog shows any signs of ill health, you should take them to a veterinarian to get checked out. While gross to us, your dog needs to be allowed to perform this natural instinctive behavior, so let them sniff and lick freely!