If you’ve got a brand-new puppy you are probably enjoying lots of play and cuddles at the moment! However, you may have noticed that your pup sleeps a lot, too. This article explores what is normal and what things you should look out for when it comes to your new furry friend’s sleeping habits.

Is it possible for a puppy to sleep too much? 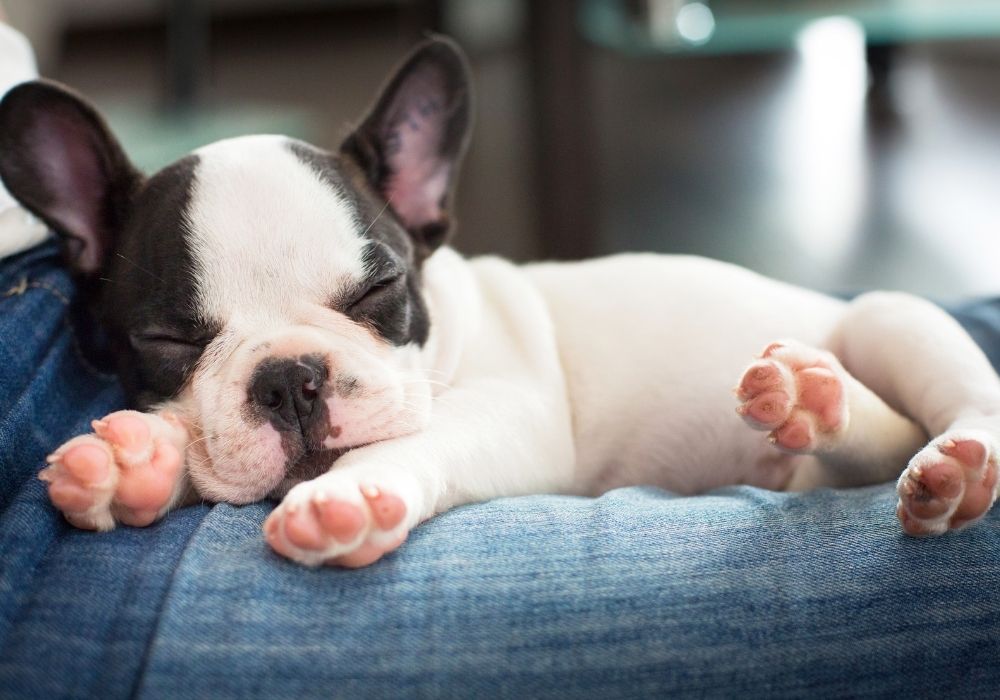 Most puppies will self-regulate when it comes to their sleep patterns. Put simply, if they are tired, they will sleep, and if they aren’t tired then they will be awake! So, puppies will generally know how much sleep they need and act accordingly.

Very young puppies, in particular, will need plenty of rest between episodes of playing and eating, so it is normal for them to have frequent naps during the day. As a veterinarian, I will often have puppies come into the clinic for their vaccinations full of excitement and enthusiasm, but then fall asleep halfway through the appointment – this is very normal!

In some rare cases, a pup may be sleeping more than normal due to underlying health issues, but this is the exception rather than the rule. If your puppy is otherwise playing and active during its awake periods, then it is usually fine.

What are normal puppy sleeping habits? 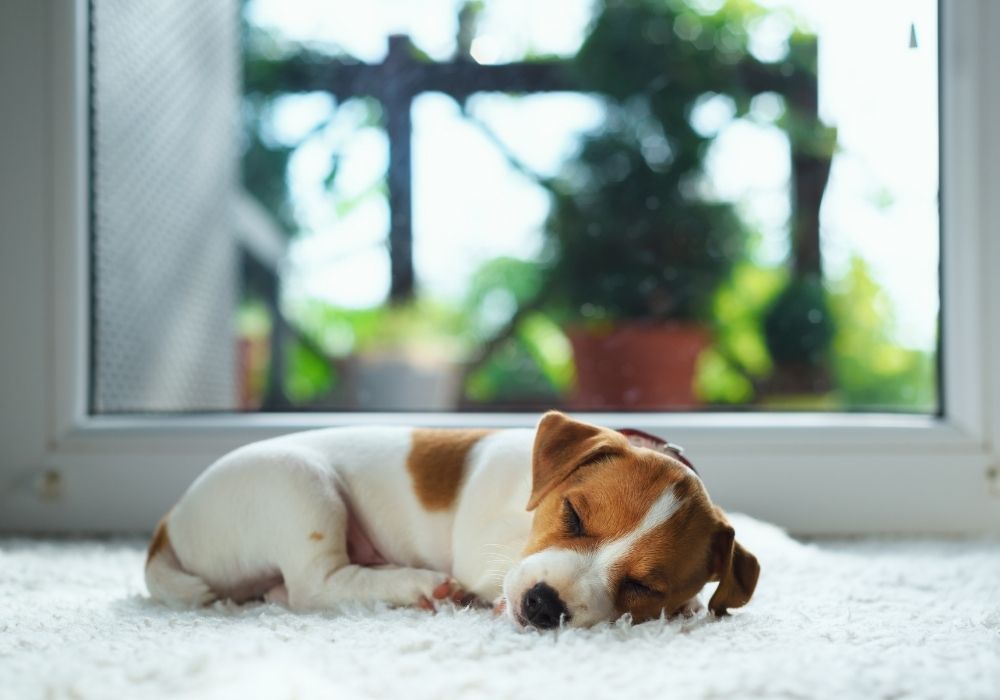 Puppies are very similar to babies in the early days, in that they will often nap during the daytime and may have problems settling at night. They are growing and developing, both mentally and physically, and they need plenty of rest to do this. A study by the DogsTrust looked into the sleep patterns of puppies, showing that younger animals need more sleep in each 24 hour period than an adult dog.

Puppies will normally have naps at various intervals during the day, especially after a period of activity or if they have a nice full tummy! Naps can vary in length and some puppies will just crash for a snooze, wherever that may be! If he is comfortable and sound asleep, then there’s usually no need to move him.

Puppies have lots of things to process at the end of a busy day, which can lead to interrupted sleep. They are also likely to wake for toilet breaks and cannot make it through the night like an older dog can. Many dogs will start sleeping through the night at around 4 months of age.

The exact amount of sleep a puppy needs can be quite variable, and breed can influence this. Some dog breeds are naturally much more active than others. Your dog’s personality and lifestyle may impact how much he sleeps — very boisterous dogs quite often crash suddenly after a period of excitement!

Puppies can worry new owners from time to time with their twitches and shakes as they sleep. They may also appear to be breathing faster than normal. This is all fairly normal for puppy sleep. If your pup is normal when he wakes up and is well-rested, then chances are they were just enjoying a period of dreaming.

Am I worrying over nothing? 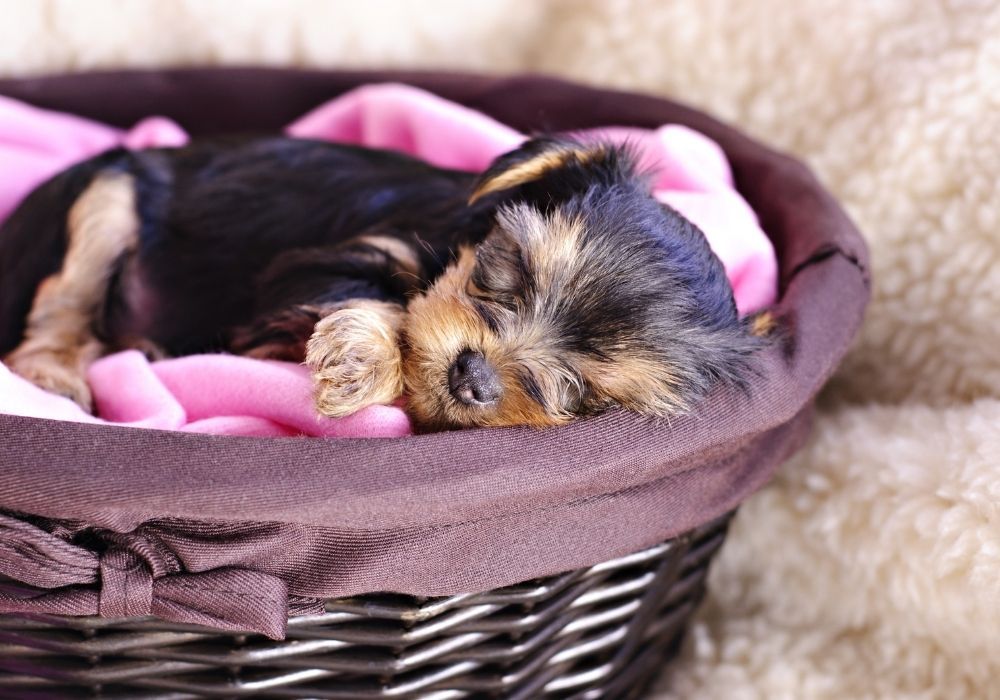 In most cases, the answer is, probably!

If your pup is growing as he should be and enjoys exploring the world and playing during his active periods, then you shouldn’t have much cause for concern. Regular weight checks and attending your vaccination appointments will help you to ensure that he is on the right track.

However, if your pup isn’t thriving generally, then his lack of energy could be a worry. Your puppy should be full of joy and mischief during his awake periods. If your puppy doesn’t want to play and isn’t intrigued by new activities, then this would be considered unusual. If he is showing other signs of ill health such as vomiting, diarrhea, lack of weight gain, or any neurological signs (tremoring, seizures, or loss of balance) then this would need investigating.

You should consult a veterinarian if you have specific concerns about your puppy.

The importance of sleep and development for your puppy 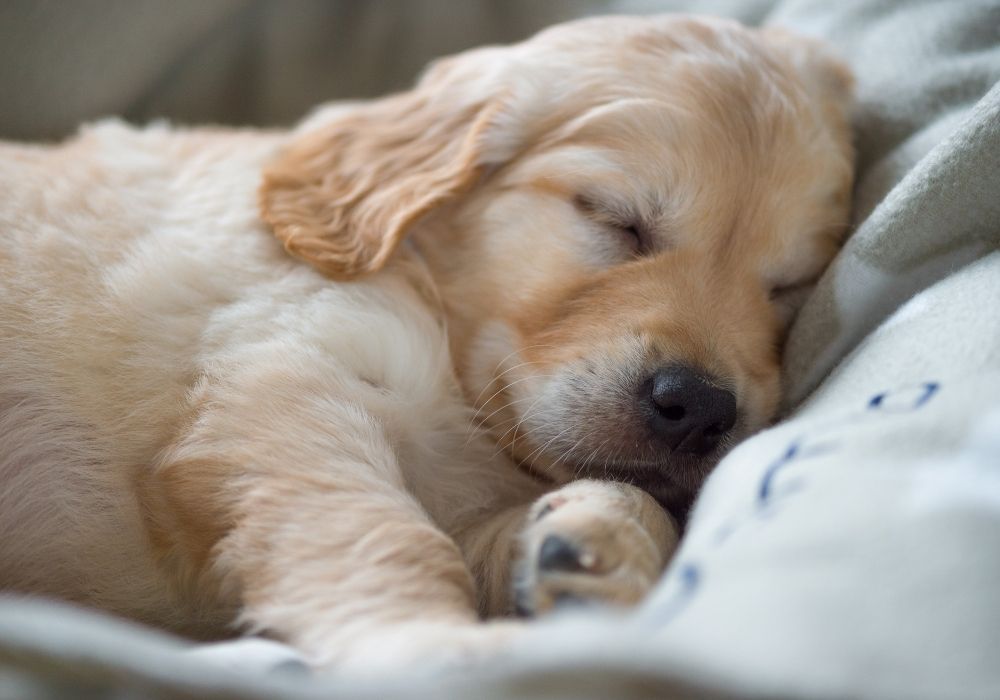 Pups need lots of rest for normal healthy development. As well as growing physically, they are processing the world around them and learning the foundations for their training. All of this requires energy, so sleep is an important way of recharging and allowing all of this to take place.

Try not to disturb your puppy when he is resting. It can be tempting to wake a sleeping puppy for more play-time but you shouldn’t – make sure you ‘let sleeping dogs lie’! Discuss this with your whole family, as young children, in particular, aren’t very good at letting puppies rest.

A lack of downtime could lead to your pup becoming tired and irritable, making it harder for him to concentrate on his training. You could enforce the no-disturbing rule by asking that no one climbs into puppy’s bed or crate with him – this is his safe sleeping space, for rest only.

Creating a sleep schedule for your puppy 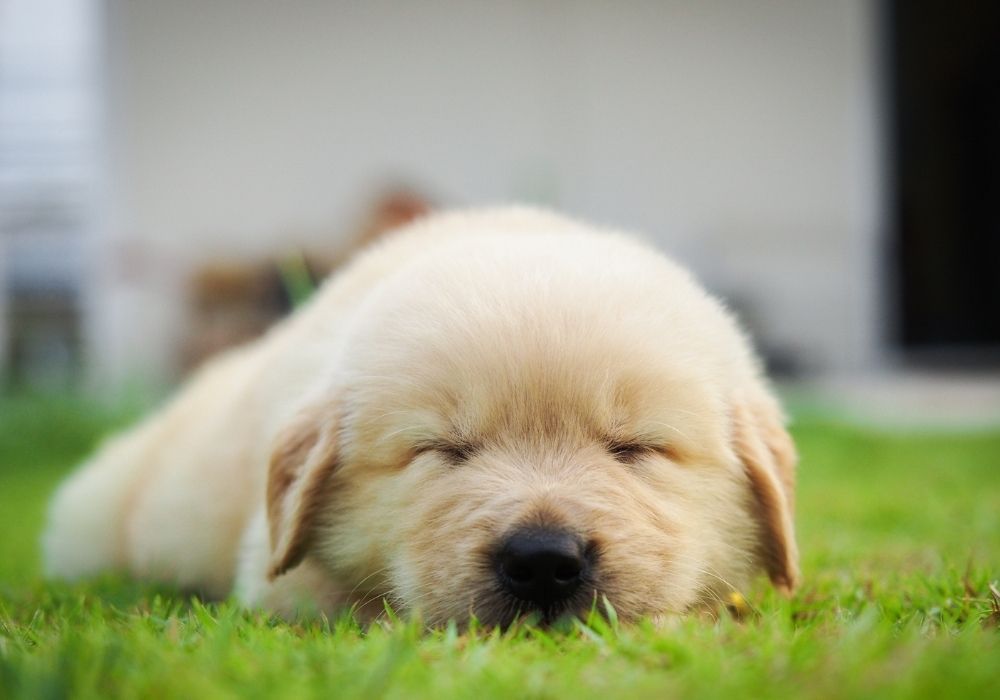 Some people find it easier to set a sleep schedule, especially if they have a dog that’s prone to getting over-tired, or children that can easily over-stimulate the dog.

It is tricky to set a daytime sleep schedule for puppies as each dog will have different sleep requirements depending on its breed, size, age, and activity levels. A pup’s natural sleep schedule can be a bit unpredictable.

As your puppy gets used to your daily routine, his naps and sleep will fall into place. The best thing you can do is to ensure that there is the opportunity for rest at various intervals in the day so that he is not always on-the-go.

To encourage your pup to sleep through the night there are a few things you could try.

It is not uncommon for a puppy to cry when they are first brought to a new home, this usually settles down fairly quickly though, and most pups are fine after a few days.

Puppies need lots of rest to grow and develop normally, with the exact amount varying from pup to pup. You must always let your puppy sleep when he wants to and try not to disturb them. Plenty of sleep is normal, but if you have any concerns about your puppy’s behavior, especially lethargy when he’s awake, you should consult your veterinarian for advice.