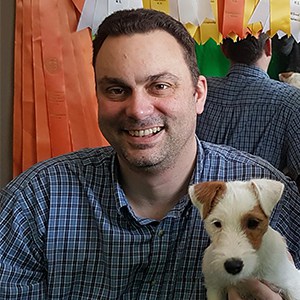 Award-Winning Breeder
Jason Homan is a copywriter, editor, and Baptist pastor who makes his home in Cape Breton Island, Nova Scotia, Canada, with his wife Debbie and their seven dogs. The couple breeds award-winning Parson and Jack Russell Terriers under the kennel name Bristol Abbey. Active in their local dog community, Jason and Debbie participate in such events as conformation and dog performance sports and are also involved in rescue. They share their home with their four Parsons Branson, Bridget, Jackson, and Gigi and their three Jack Russells Beckham, Dior, and Posh. 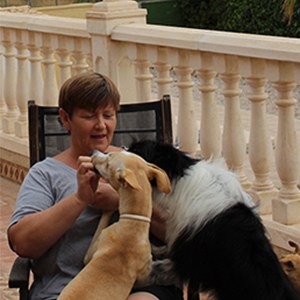 Experienced Dog Trainer & Behaviorist
Lynda has been a dog trainer and behaviorist for over 25 years and holds an MSc in Applied Animal Behavior and Training (Distinction). She lectures on degree courses in Applied Canine Behavior and Training and specializes in helping dogs with extreme fear. Lynda has competed with her own dogs in agility, obedience, and flyball and now shares her life with, Ellie a Working Bearded Collie, Fizz a Galgo/Podenco cross and Reginald a terrier crossbreed.

Professional Dog Walker
Becky Simmonds is a professional dog walker and part-time rescue worker. In her local community she's known as the 'dog whisperer'! Her innate ability to understand and communicate with dogs (even if they're not hers) is quite incredible! Becky's loyal companion Chip, a German Shorthaired Pointer accompanies the group on their daily adventures! 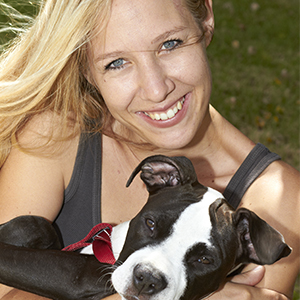 Dog Rescue Worker
Charlotte has the rewarding, yet challenging job of being a Dog Resuce Worker. Although she encounters quite distressing situations, it's all worthwhile when a pup is nurtured back to health and re-homed. She shares her home with Pete the Pitbull, who incredibly, was the very first dog she ever rescued.
Scroll to Top